"Hate is nature’s most perfect energy source": Showtime's "Billions" hits its stride in its return

The second season of the premium cable drama loses a share of its histrionics, but none of its addictiveness 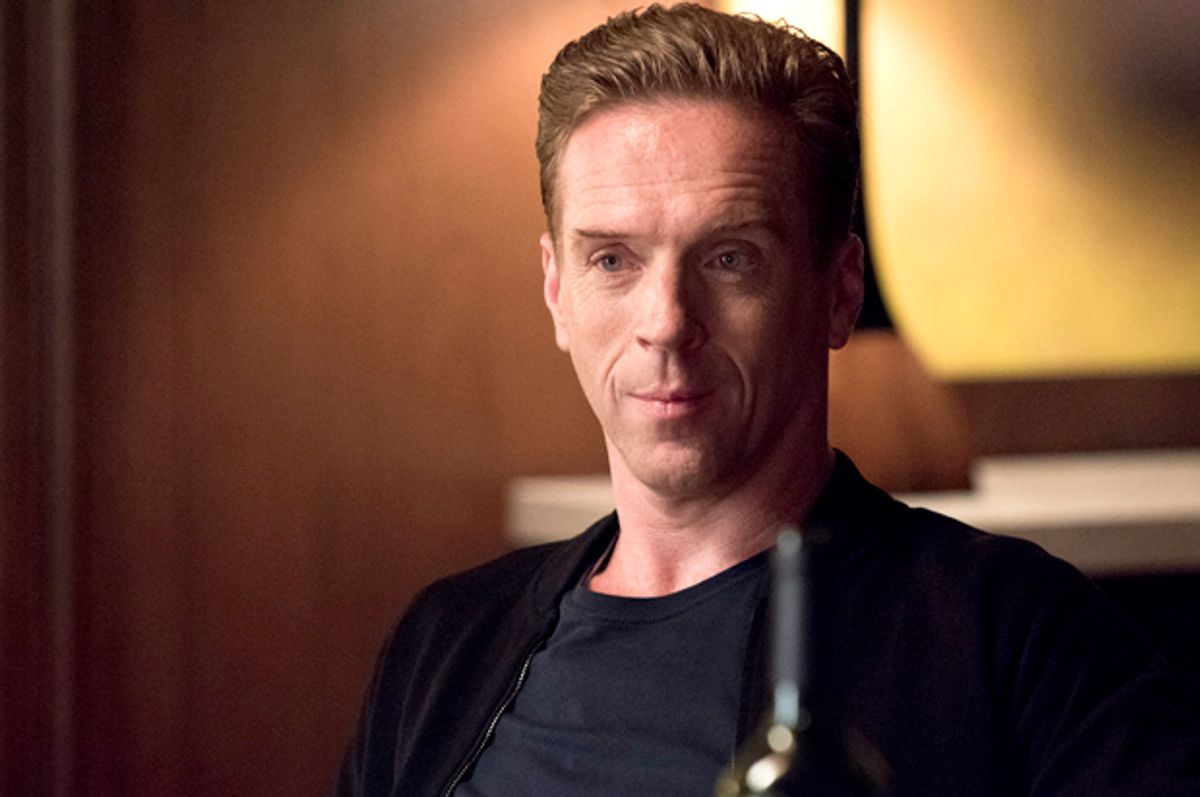 Bobby “Axe” Axelrod enjoys arenas, large and small, especially ones that are empty. In an upcoming episode of Showtime's “Billions” the Wall Street king stands with one other man in an open stadium on a sunny day. As he ponders purchasing a football team, he scans thousands of open seats, musing aloud as to where he'd like his throne to be. But for shadier work, the kind seen in the second season premiere, he chooses vacant racetracks in the middle of the night.

“There’s nowhere that the stark difference between winners and losers is more clear,” he tells a colleague as he scans the empty lanes. As they speak, a lone jockey runs his thoroughbred; Axe’s companion asks him to explain why the rider is there, and the rich man spins a short but sufficiently elaborate tale. The listener nevertheless recognizes it for what it is — theater. A dramatic visual backdrop for an announcement to an audience of one.

“I have called you here tonight to tell you how we are going to win,” Axe declares.

“Billions,” a bombastic, first-rate pleasure, returns for its second season on Sunday at 10 p.m. and continues to celebrate how engrossing it can be to watch the Jackson Pollacks of bullshit ply their artistry. Created by Brian Koppelman, David Levien and Andrew Ross Sorkin, “Billions” hinges upon the battle royale between Damian Lewis’ Axelrod, the billionaire head of Axe Capital, and U.S. Attorney Chuck Rhoades, played by Paul Giamatti.

Rhoades and Axelrod love to be the victors in their respective fields, and the entire ignition of their conflict stems from a sense of self-importance. Rhoades had a spotless record of prosecuting financial crimes until the Securities and Exchange Commission goads him into taking on Axelod. Axe, meanwhile, is desperate to be seen as truly legitimate in a world that still discounts his success by implying that he has exploited his status as a survivor of 9/11.

Watching Giamatti and Lewis separately gnaw on their scenes is its own delight. When they share a room, that delight balloons into a spectacle. Other colorful characters splatter their egos across their canvases of choice in stupendous fashion, but Rhoades and Axe go bigger. Rhoades’ is the world of justice and politics. Axe wants the world.

The temptation to liken Lewis’ Axe to a certain headline-grabbing, Twitter-addicted autocrat may be, as he says, yuge. No solid parallels exist, although Axe does embody everything Main Street envisions a Wall Street corporate titan to be — polished, cold, a player.

Above all, he’s a calculating gambler who makes moves based on data, not passion. At that racetrack, Axe explains to one of his confidants that he used to watch what the winning bettors did and how the numbers on the board correlated to their wagers. This, he says, taught him how to evaluate prey. And everything and everyone is prey, including the odd predator like Rhoades who manages to back him into a corner.

Nevertheless, Fran Lebowitz’s quote about Donald Trump applies to the first season of “Billions.” It never shakes off the feel that it is a poor person’s idea of a show about rich people. Levien and Koppelman co-wrote the scripts for “Rounders” and “Oceans 13,” and apply the same high-concept swagger to the series.

Each episode is a quilt of conversations made for screens, wrapped around a cast delivering ferocious, magnetic performances. Every line of dialogue is intentionally clever and meticulously thought-out, conscious of an audience hanging on every word.

Yet that first season “Billions” looks better than it actually is largely because it also blesses us with such golden one-liners as “What's the point of having fuck you money if you never say fuck you?" Nobody really talks like the men in this show do, but what a place the world would be if they did! It would be amazing. We’d love hating it.

The entertainment value of this drama is nevertheless undeniable. Nobody could ever mistake this series for a prestige show, but “Billions” isn’t gunning for that crown. Instead, the producers seem content to churn out a successful, appealing show that gets away with its indulgences because it runs on premium cable.

The second season has the less of the first’s pugilistic intensity, and that is a positive evolution. All the actors at Axe Capital look a little more comfortable in their impeccable clothing; the players in Rhoades’ office exude the air of the besieged.

“Billions” hasn’t abandoned any of the various subtexts that make it so absorbing; in fact, the decreased furor means it brings more attention to those themes.

In season 2, the tables have turned. Rhoades and Axelrod remain locked in a sword fight, and at the end of the first season, Rhoades has the advantage — until he doesn’t. The problem is that he attains the smoking gun he has been desperate to find by breaking into the computer belonging to his wife Wendy (Maggie Siff). Rhoades suddenly drops his crusade to bring the billionaire down, losing his marriage in the process. Wendy quits her job as Axe Capital’s in-house performance coach, but not before receiving a $5 million bonus from Axe.

There is no way that isn't going to come back to bite the estranged Mr. and Mrs. Rhoades; indeed, if the first season of “Billions” is drama about a reform-era Wall Street, the second is a play about the era of deregulation, with the animals turning on the hunters, teeth bared.

Axe is not an overly sensitive man, but he answers egregious slights with overkill. Rhoades underestimates this; confronting Wall Street's rogues head-on didn’t work, he tells his colleagues. Acting with purpose and understatement is the new way to enact justice. Elsewhere at the very same moment, Axe prepares to go nuclear on the man who got under his skin.

“Billions” is still at its best when it reminds viewers that they're watching a zoo filled with braying seven-figure jackasses, while allowing them to admire the sleeker machinations of the astronomically wealthier lions who actually lord over the place.

Power is delineated by a respect for refinement within this savage realm. Even drug-powered jesters such as Axe’s closest counselor Mike "Wags" Wagner (an endlessly entertaining David Costabile) comprehend that, as a telling scene in a restaurant reveals. Rhoades’ career and reputation are threatened by a tightly wound inquisitor named Oliver Dake (Christopher Denham), a bespectacled newcomer gunning for his position.

The scenes outside of Axe's and Rhoades’ respective offices speak to what’s really driving these characters, though. Axe flirts with the trappings of competitive sport; Rhoades has traded in season 1’s flirtation with S&M (including a golden shower, proving the show was ahead of its time) for full-contact martial arts sparring. Axe is a man of agile competition and endurance. Rhoades is training for a fight.

Season 2’s most riveting subplot involves Taylor (Asia Kate Dillon), an Axe Capital intern with superior deductive analysis skills and someone who identifies as nonbinary with respect to gender. Taylor soon becomes Axe’s favorite, much to the consternation of the full-time staff at the hedge fund.

But for Axe it’s Taylor’s mind that's fascinating — that of someone who can’t be bought or seduced. Taylor views Axe as a puzzle; Axe sees Taylor as a kindred spirit that challenges him. The scenes between Dillon and Lewis buzz with an energy unlike anything else in this show. Somehow the actors have channeled the precise hum of two platonic intellects obsessed with deducing what exactly they are to each another and to the world.

Among Axe’s highest obsessions is establishing ownership over superior talent and knowledge, and a sore counterpoint to his burgeoning relationship with Taylor is his loss of Wendy, a sting made worse by her fielding offers from Todd Krakow (Danny Strong), an excessively smug rival afflicted with short man syndrome.

Strong is one in string of actors making potent cameos in season 2: Eric Bogosian as a banking magnate under attack, James Wolk as a stand-in for any number of billionaire innovators, and Mark Cuban as Mark Cuban. The main players are still the reason to watch, especially Siff’s Wendy, who brings a new combative edge to her truth telling. Malin Åkerman portrays Axe’s wife Lara, and the writers give her more to play with this season besides playing the part of the dutiful woman ready to pack bags full of cash and flee with the kids. The experience of nearly losing everything has awakened Lara to the truth that she needs to found and handle her own business.

The headliner in “Billions” as always is the dialogue and the naked enmity. “Hate is nature’s most perfect energy source,” Axe observes to Taylor in an intimate moment. “It’s endlessly renewable.”

It’s also a cleaner, smoother fuel in season 2, one that does its part to help “Billions” hit its stride. Fortunately the producers and cast appear to have figured out that it’s not the only key to winning.