How a North Korean mountain and myth may have inspired murder

A desolate volcano could be the key to unraveling the sudden, mysterious death of Kim Jong Nam 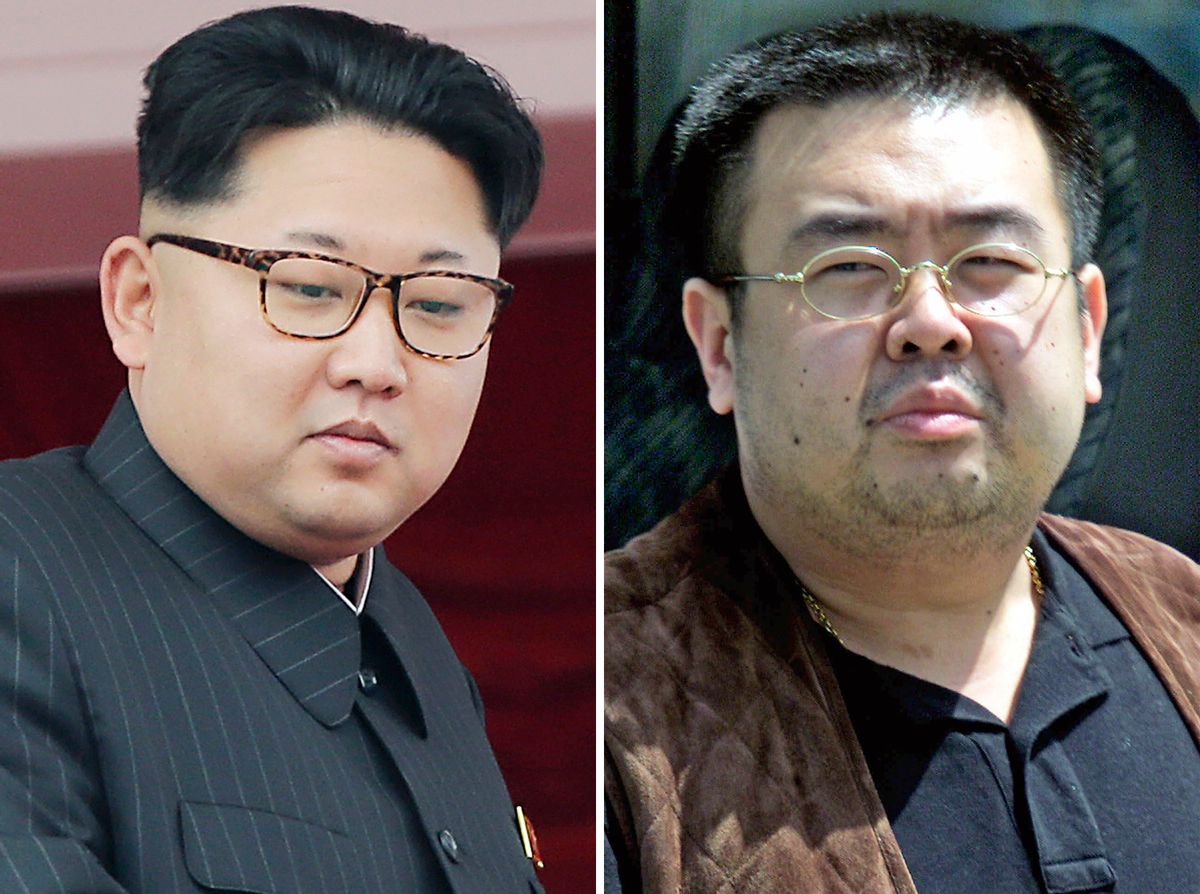 FILE - This combination of file photos shows North Korean leader Kim Jong Un, left, on May 10, 2016, in Pyongyang, North Korea, and Kim Jong Nam, right, exiled half brother of Kim Jong Un, in Narita, Japan, on May 4, 2001. South Korea’s spy agency believes that Kim Jong Nam was assassinated this week in a Malaysian airport as part of a five-year plot by Kim Jong Un to kill a brother he reportedly never met. If this is right, the motive likely has more to do with their shared bloodlines - and that volcano - than any specific transgression. (AP Photos/Wong Maye-E, Shizuo Kambayashi, File) (AP)
--

SEOUL, South Korea — A desolate but lovely volcano on the North Korea-China border could be the key to unraveling the sudden, mysterious death of an exiled scion of North Korean royalty.

South Korea's spy agency believes that Kim Jong Nam was assassinated this week in a Malaysian airport as part of a five-year plot by North Korean leader Kim Jong Un to kill a brother he reportedly never met. If this is right, the motive likely has more to do with their shared bloodlines — and that volcano — than any specific transgression.

The volcano — Mount Paektu, which is topped with a deep crater lake — is at the heart of North Korea's foundation myth, and is used to legitimize the Kim family's three generations of power. Paektu is emblazoned on the country's national emblem and lends its name to everything from rockets to power stations to, occasionally, the country itself.

Crucially, it serves as a sort-of geographic incarnation of the Kim brothers' late grandfather, Kim Il Sung, the most important person in North Korean history. Kim Il Sung saved the Korean Peninsula, according to the official Pyongyang narrative, with daring guerrilla raids against Japanese invaders from his base on the slopes of Paektu.

Because the Kim brothers shared the same exalted and heroic lineage — the "blood of Mount Paektu" — the argument goes, no matter how low profile he was, Kim Jong Nam would always pose a danger. As long as he lived he could share, if indirectly and probably unwillingly, in the avalanche of propaganda associated with the sacred volcano, all of which seeks to prove that the Kims are the only governing possibility in North Korea.

This goes a long way to explaining the disconnect between the coldblooded nature of the alleged assassination and the seeming harmlessness of Kim Jong Nam, an overweight gambler and faded playboy who had laid low in recent years in his Southeast Asian base and who once, according to South Korea's spy agency, wrote his brother a letter begging for his life.

If the South Korean spies are right that Kim Jong Nam was assassinated — something not yet acknowledged by Malaysian authorities, let alone North Korea — the bloodline worry would have been a powerful reason for Pyongyang to strike.

"Kim Jong Un might have thought that he had nearly completed his consolidation of power and that taking out Kim Jong Nam would be a finishing touch to eliminate a potential source of trouble," said Koh Yu-hwan, a North Korea expert at Seoul's Dongguk University.

Korean history is replete with bloody royal power struggles. And when the disgruntled elite tried to overthrow kings, they often used estranged princes or others with royal blood as figureheads to rally support.

Past rulers on the Korean Peninsula also "legitimated themselves and their offspring by virtue of their 'pure bloodline,'" Bruce Cumings, a historian and Korea expert, has written.

The Kims of North Korea have carried on this veneration of royal blood, and extended it to the volcano associated with the country's foundation.

As early as 2009, North Korea called Kim Jong Un the "General of Paektu," Koh, the North Korea expert, wrote in a 2013 essay. Kim Jong Un inherited the "bloodline of Paektu," which is heralded as the country's "existence and the lifeline of generations to come."

Another point to consider is that North Korea's "Kim worship" is, according to Cumings, "Neo-Confucianism in a communist bottle."

Kim Jong Un, the youngest known son of Kim Jong Il, could have feared his brother because under a traditional Confucian value system, Kim Jong Nam, the eldest son, would have been considered the direct heir to the throne.

"Kim Jong Nam was a potential threat," according to analyst Chang Yong Seok at Seoul National University. "Kim Jong Un might have believed that opponents could push to (oust him) and enthrone Kim Jong Nam."

It's anyone's guess what this may mean for the rest of the bloodline.

Kim Jong Un has another older brother, Kim Jong Chol, who's seen as a huge fan of rock guitarist Eric Clapton. The middle of the three known sons, he was once considered by some outsiders as a potential candidate for leader, but a former sushi chef of Kim Jong Il said the late leader derided him as "girlish." South Korean media report he is in Pyongyang but shuns public activities.

Kim Jong Nam reportedly leaves behind two sons and a daughter between two different women living in Beijing and Macau. There are worries in Seoul that one of the sons, Kim Han Sol, could be in danger because his father may have told him secrets about Kim Jong Un's personal life.

Kim Han Sol also once referred to Kim Jong Un as a "dictator" in an interview.

Associated Press writers Tim Sullivan in New Delhi, and Kim Tong-hyung and Hyung-jin Kim in Seoul contributed to this report.