Michael Flynn, right-wing hero: Will conservatives embrace him the way they did Ollie North?

Trump's disgraced adviser may be viewed as a righteous fallen rebel, like Oliver North or G. Gordon Liddy 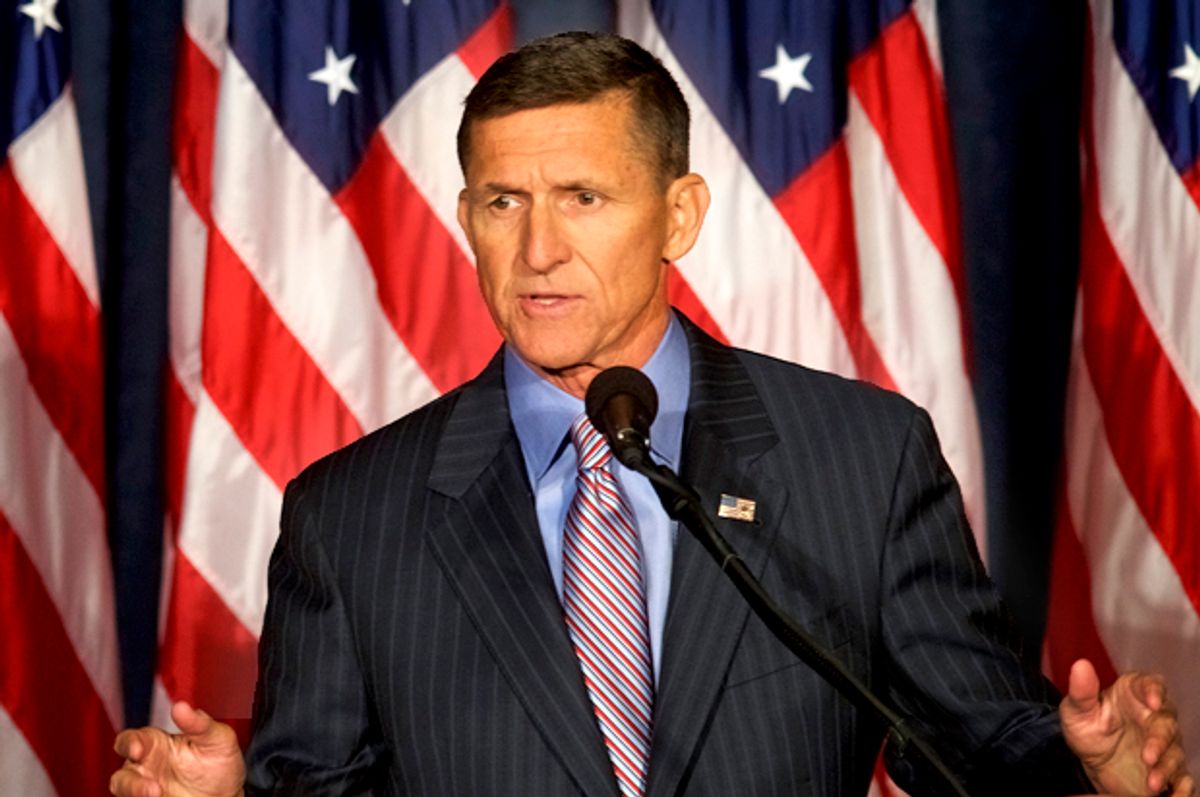 One of the strangest aspects of President Donald Trump's unhinged press conference on Thursday was his insistence that even though he had fired Michael Flynn, his short-lived national security adviser had essentially done nothing wrong.

"Mike Flynn is a fine person, and I asked for his resignation. He respectfully gave it," Trump said. "He didn't have to do that because what he did wasn't wrong — what he did in terms of the information he saw."

Twitter erupted with cracks about the contradictions in Trump's position.

In a disturbing twist, it turns out that Trump's incoherent take on Flynn makes quite a bit of sense to the president's legion of supporters. What Flynn did was unethical and possibly illegal, but at least for some people in the most devoted quarters of the right, that's exactly why they like him.

For decades now, conservatives have romanticized the idea of rogues for the right, valorizing men who break all the rules — or even the laws — in their pursuit of supposedly virtuous goals. Conservatives like to talk a big game about law and order, but when it comes to getting their way, they admire no one more than a criminal.

Look, for instance, at the post-scandal careers of Oliver North and G. Gordon Liddy. Both men rose to national notoriety not just for breaking the law, but also for clearly believing they were justified in doing so. And that attitude ended up making them right-wing culture heroes, with robust and lucrative careers selling themselves as daring rebels to adoring conservative audiences.

Liddy became a national figure during the Watergate scandal, when he was exposed as the mastermind behind the break-in and wiretapping at the Democratic National Committee headquarters. For his crimes, Liddy was sentenced to 20 years in federal prison and ended up serving four and a half years.

He did not exactly walk out a repentant man. On the contrary, Liddy refined his bad-boy shtick, claiming that in his loyalty to Richard Nixon, he had even considered murdering the journalist Jack Anderson. His renegade reputation landed him a 20-year gig as a talk radio host, preaching hard-right politics and periodically titillating mainstream media outlets by advising listeners to shoot federal law enforcement officials and promoting the "birther" conspiracy theory.

Oliver North, lovingly nicknamed "Ollie" by his fans, has followed a similar trajectory. While serving as a lieutenant colonel in the Marines, North was the main negotiator in an elaborate scheme to sell weapons to Iran and funnel the money to the right-wing contra rebels in Nicaragua. The whole scandal became known as the Iran-contra affair, and Americans became acquainted with North through his many hours of televised testimony during congressional hearings over the matter. North was convicted, but spent a short amount of time in prison before he was released on appeal.

Like Liddy, North was able to channel his rogue image into a media career after getting out of prison. He hosted a radio show for the better part of a decade and now appears as a regular commentator on Fox News.

Make no mistake: These two men are beloved by conservatives because of their criminal histories, not despite them. The right has always loved the idea of a vigilante, especially a white man who overturns liberal shibboleths about due process and fair play — all for the purpose of imposing his authoritarian will on the community. It's the enthusiasm that fuels the myth of "Dirty Harry" and goes a long way toward explaining the enthusiasm for Trump himself.

Early signs suggest that plenty of conservatives are ready to slot Flynn into the role of "great man who gets things done, and damn the rules."

The Daily Caller named Flynn "a genuine American hero." The folks at Breitbart are blaming Trump's chief of staff, Reince Priebus, for Flynn's ouster and vowing revenge. Rush Limbaugh found a way to blame Barack Obama (which was admittedly imaginative) and called Flynn the victim of a "political assassination." To no one's surprise, neo-Nazis are blaming "the Jews."

What happens to Flynn's reputation matters, in no small part because it's a harbinger for how the right will understand Trump himself, as his presidency inevitably becomes even further weighed down by scandal. Will conservatives imagine him as an embarrassing footnote in Republican history, a charlatan who hoodwinked them into supporting him, only to humiliate them later with his corruption? Or will they consider him more like Liddy or North, a rebel who breaks a few dishes while fighting the establishment to advance true-blue American values? Their reaction to Flynn in the wake of his scandalous downfall offers a clear hint.