Sincerely, Niccolo Machiavelli: An open letter to Donald Trump, from the guy who wrote the book on power moves

I must commend you on your masterful victory over your opponents. But some of my lessons you've failed to learn 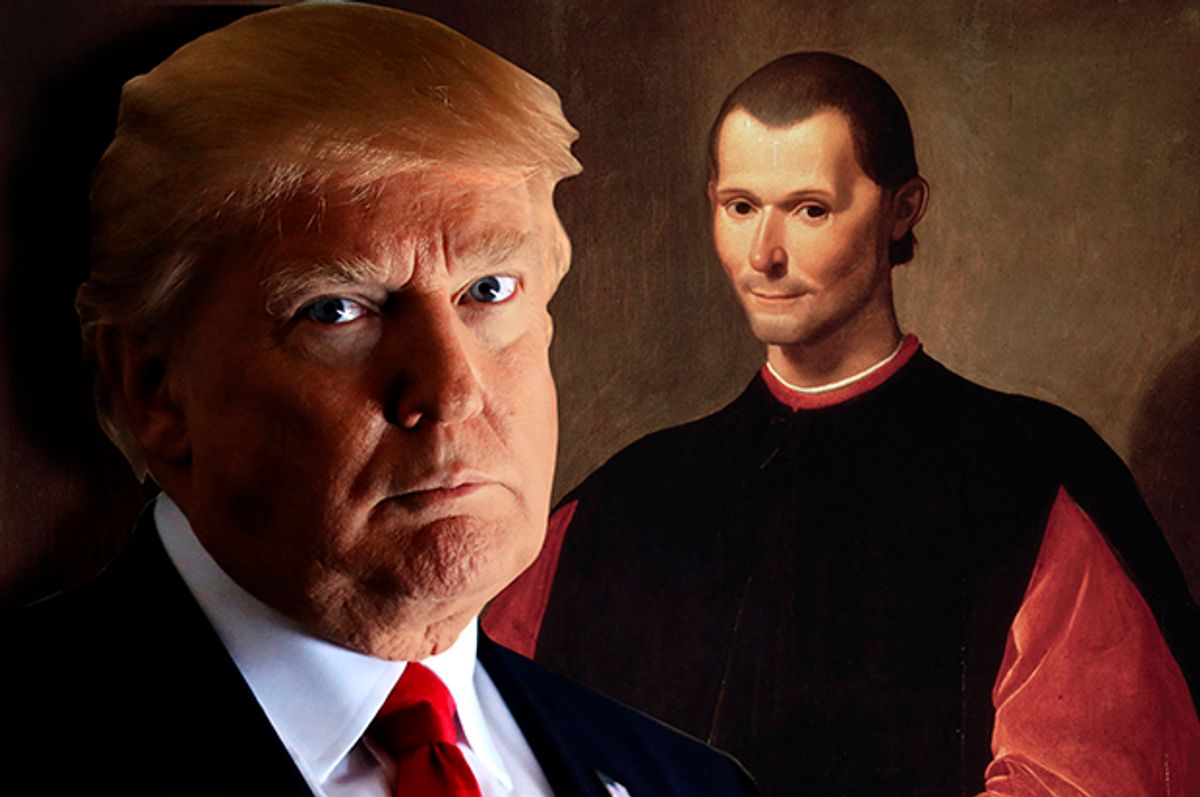 As I have elsewhere explored at length, the true worth of a Prince is determined by the means with which he takes power and how he seeks to manage his principality in the aftermath. Concerning your rise to power, I must first commend you on your masterful victory over your opponents. In Gaul, Caesar divided the barbarians so thoroughly that even when they united under Vercingetorix they could not bring themselves to victory, just as you have stoked existing divides in the opposing Democratic faction to ultimately rule over them. I must also commend your ability to grab opportunity and fortuna — a most masculine virtue — as well your ability to use hidden allies, whosoever they may be, to great effect. In that, however, my commendation must turn to caution, for these methods which have brought you success could also bring your downfall. Consider Agathocles, the Syracuse tyrant who came to power by slaughtering his fellow citizens. He not only acquired a princedom out of his misdeeds, but retained it. Why? Because by committing his worst sins at once, he could then reassure his subjects and make amends for his misdeeds. Alas, such wisdom in sinning is today lacking.

Instead, your ill-advised sins in election and in governance have been committed in continuous succession, a manner allowing the bitter vice to be savored in the thoughts of your subjects. Such sins include vilification of your enemies — that may have brought you victory, but comes with great costs and enemies. Once disjointed and apprehensive, these foes now hold hatred for you, greater than ever before, and thus will only labor greater than ever before to defeat you. Remember Gracchus, who led an army raised of slaves against Carthage and punished with death any who chided his soldiers for their past stature — that only inflamed and reminded them of those who had enslaved them. Your words alone, often ill-chosen and sent by nightly courier, only remind and rouse your enemies into a pack of wolves thirsting for your blood.

You have also acquired allies, within and beyond your state, who have helped put you into power, and on whom you have come to depend, for lack of your own foundation. Yet, those allies have little to give, and you are fortunate they squabble among themselves. Beware Russia, however, where corruption is a cancer upon state and people, and its Prince who will use you for his own purposes. When your real enemies come baying, you will have acquired from your friends only an image of promised aid rather than the aid itself. It was thus when the Florentines, under assault from the King of Naples as allies of the Pope, sought such undelivered aid from friends Bologna and Milan, a friendship offering “more notoriety than protection.” So, like Caesar before you, beware the Ides of March, for should you ever waver in your rule, at home and across the seas, those wolves shall come: You will have neither sword nor shield to defend with.

There is still time to learn to read, to write and to adopt a temperament befitting a Prince, who must speak well and appear honest, even if it is sometimes necessary to bear falsehoods. But you have so far failed to even appear virtuous, choosing instead to placate some and alarm others with exaggeration. You arrived in your position by the favor of the people; you ought then to be indomitable, yet that favor arose out of a minority, many of which are still wary of your virtue. Your first concern ought then to be placating the discontented, yet you act cruelly, punishing and abusing those who oppose you, at a moment when you can least afford even the image of cruelty. Like Manlius Capitolinus, who extolled falsehoods to the plebs to bring tumult to the city and the Fathers, you extoll such calumnies, many of greater magnitude than Manlius, and you can only expect the same fate should you continue. You sow falsehoods, of fraud and health and all between, in defiance of reality, only to alienate plebeian and patrician alike, losing any popular favor that remains. Without it, your worst fears will be realized and you will fear not only the noble conspiracies of a modern Cassius, but also the common conspiracies of a modern Antony.

My final word, and your final lesson, is how not to waste your position by your own folly, each new action having only enhanced your previous mistakes. Most prominently, your choice of counsel betrays you. Recall, “the first method for estimating the intelligence of a ruler is to look at the men he has around him.” The men who have entered into your employ seem to be mere flatterers, as in Reince Priebus, or savage manipulators, as in Stephen Bannon. Neither are to be desired, for flatterers will cause you to never have the right counsel and manipulators will cause you to lack the right counsel precisely when you need it, both being failures of yours. Beyond those, you have chosen ministers with design to head ministries of which they have no knowledge, Ben Carson and Rick Perry chief among this class, thus filling your government with fools. To take counsel with fools is to be a fool, thus your choices only impress an image of folly upon you.

To end, I must judge critically your onslaught upon the proper foundations of governance. As in Rome, where the power of government was shared between consul, senator and tribune alike, your founders created an ideal republic shared by president, congressman and judge alike, each themselves coequal in governance. Yet you order your equals in Congress to do your bidding, and undermine your equals in the courts through threats of blame for any ill that befalls — or will befall — your state. In this onslaught you have appealed to the sympathy of the masses, while acting not in their interests, but in those of your patrician family. Remember, the disunion of interests between rich and poor is what made Rome great, so to pad your own nest with the lost wishes of the many is to invite discord into your republic. In these weeks since your inauguration, you have managed to mold yourself into an enemy of republic everywhere, and history will record your rule as worse, even, than Agathocles. That Greek tyrant was a man of “barbarous cruelty and inhumanity with infinite wickedness,” but at least he owned a “greatness of mind” and tried to rule in the interests of his principality.