Welcome to the Donald Trump mailbag: Bigly responses to totally tremendous letters from his fans

President Trump graciously shares his wisdom (like a meatloaf with Chris Christie!) with his adoring supporters 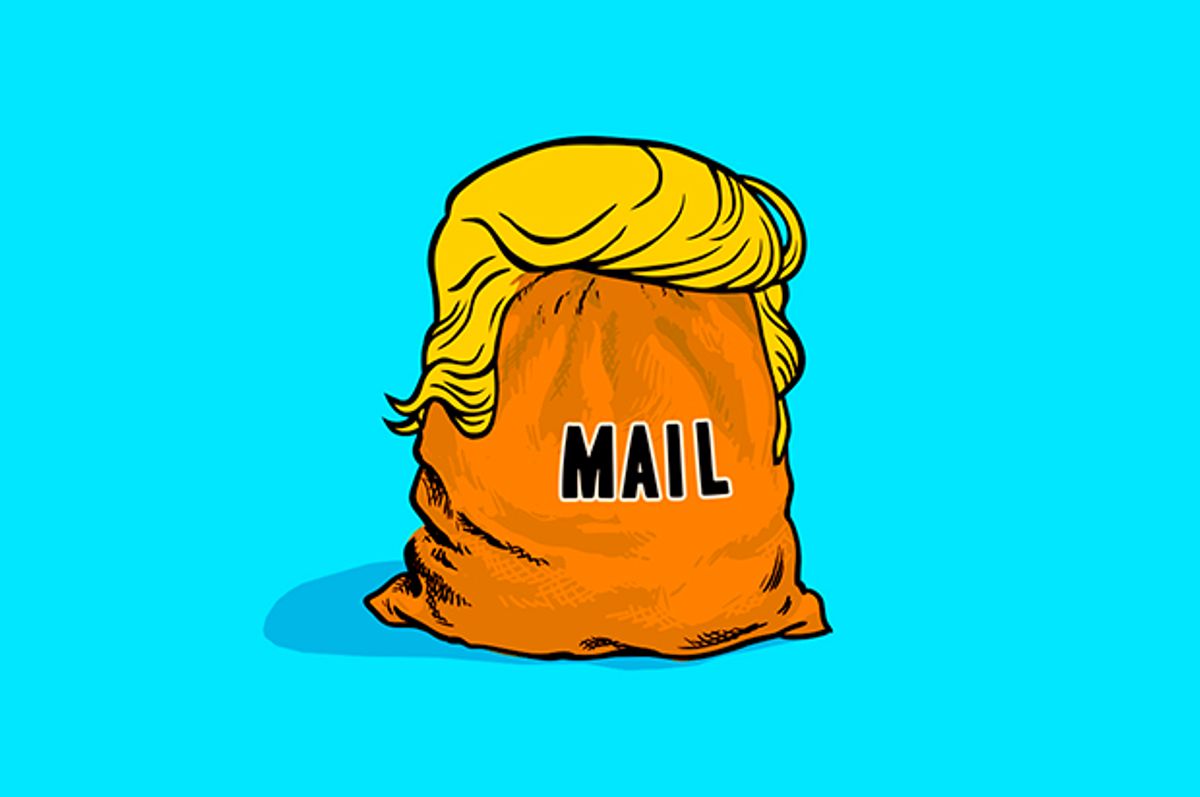 Facebook
Twitter
Reddit
Email
view in app
(Editor’s Note: President Trump has agreed to periodically answer fabricated fawning letters from his supporters. Salon has agreed to publish the letters and his answers completely unaltered, which seemed like a good idea at the time.)

Am I wrong? Most people just don’t get you. — Steve M., Columbus, Ohio

No, you’re not wrong. It’s a little more complexical than that. Here are the statistics. 78 percent of the people just don’t get it. That’s the problem. Of that number, 78 percent don’t get me. So, it’s 156 percent, which, if you’re a math guy -- and I have the best math guys -- is even more than most people.

I am a sophomore in college. De Tocqueville famously wrote that the problem with democracy is that freedom forces people to have to make choices. Do you agree? —Tommy L., Wayne, Pennsylvania

Let me tell you something, is it Tommy? Bad name. I like Wayne. Wayne is good.

So, Wayne, De Tocqueville is absolutely right. I hit a bucket of balls with him out of the new bunker I just put in Michelle’s vegetable garden. He said the exact same thing to me. And then I said, “Pick a spot an inch behind the ball, hit there, and let the sand carry the ball.” He did it, and he called me a genius. Not the first time, by the way. Maybe the first time that morning.

You have a remarkable command of the law and the legal system. Did you ever consider becoming a judge? — Joe T.,  Houston

I can’t tell you how many times I’ve been asked this. No, never considered it, because that would have involved going to Shyster School. I call them shysters for two reasons. 1) That’s what they call each other. 2) It’s Saturday, the sun is still up and my son-in-law has no access to a computer. Or indoor plumbing.

Is there a Trump Doctrine for Foreign Policy in The Mideast? — Lauren C., Jacksonville

Let the sand carry the ball.

I was there when this happened. You remember when balsamic vinegar came out? Like 10 years ago. It did not exist before then. Hadn’t been invented. The Balsamian people were extremely poor. No clothes. You understand no clothes? They went into the vinegar business. All of sudden, clothes. Tremendous success story. They took their country back. Well, the white vinegar people needed something. And that’s what happened. And I think it’s terrific. And that’s the kind of thing we’re trying to do.

Big fan. Can you settle a bet? I say there is no such thing as being too ostentatious. My sister says there’s a thing called restraint. Who’s right? — Sally R.,  Montclair, New Jersey

Wait a minute. Was that last question from someone named “Rajib”?

Do you ever get tired of people thanking you? — Nick N., Portland, Maine

The answer may surprise you. Yes. Yes, I do get tired of people thanking me. That’s not what’s surprising. What’s surprising is why I’m tired of it. Here’s the problem. When somebody thanks you, what do you say? Right. “You’re welcome.” Do you have any idea how exhausting that is? You probably don’t, because who would thank you? But that’s not what upsets me.

You may wonder what upsets me.

If you thank me, and I say “you’re welcome,” it means I can’t say it when you don’t thank me. You know, I do something for you, maybe make something go away, and you just start to leave the room and I can’t say, loudly, “you’re welcome!” With a bit of an attitude. Because, let’s face it, this is what people love about me. The attitude. They come for the looks, they stay for the attitude. Saying “you’re welcome!” loud when you don’t thank me is one of my moves. So, if I have to say it when I’m supposed to, you’re depriving me of one of my moves. Frankly, it’s cruel. I know you didn’t mean it, but it’s cruel.

That’s okay, I’ll let it pass. This is on me. I take responsibility. That’s what I do. If anything, I do it too much. It’s a shortcoming. I’m working on it. But I think, and I’m going to road test this a bit, from now on, when anyone says “Thank you,” instead of “you’re welcome,” I’m going to say, “Wait a minute. Is somebody else talking?” Yeah. Yeah. I like that. Thank me later.

Are you going to do a weekly radio address? — Mary B., Pittsburgh

Do you have any idea of all the stuff I’m supposed to do, running this fixer-upper of a shitbox I was left with?

And weekly? Like every week? What is this, Zumba? And who am I, Casey Kasem? You know, he was Lebanese. Hang on . . . fabulous, they’re not on the ban. He was one of the good ones. Him, Jamie Farr and Danny Thomas. That’s the list. You know, Jamie Farr and Danny Thomas had their own golf tournaments, but they lost them? Jamie because he was on that show, “AfterMASH,” and they had terrible ratings. And Danny lost his because, well, ask any hooker.