On Saturday night I don latex and beat men with paddles. On Sunday morning I go to church. Are they much different? 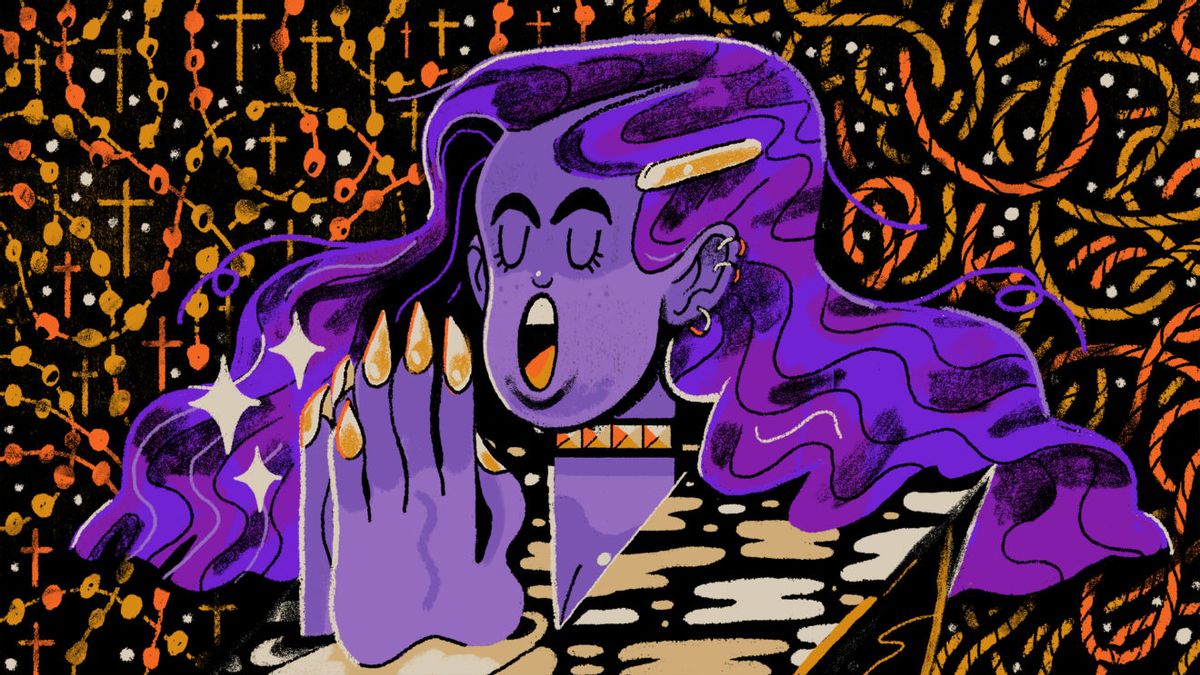 Read more Narratively: "I Should’ve Swiped Left: Our Seven Best Stories About How Dating Is The Worst"

Read more Narratively: "I Wanted to Be His Prized Possession"

When I arrived at the dungeon for my interview dressed from head-to-toe in faux leather, I was greeted by Amy, the office manager. She was wearing a T-shirt and dress pants, which surprised me — I’d expected a corset and heels, or something salacious. Instead, she looked plain, with shoulder length brown hair and an accent I couldn’t identify, maybe Russian. The place was listed in the building as a studio, but when I got to the floor there were two heavy wooden doors. When Amy gave me a tour, I saw that there were themed rooms. I really liked the room that was designed to look like a doctor’s workspace.

“What kind of things do you do with your submissive?” she asked.

“No, I’m not really sure how to do cock and ball torture.”

“I guess we will show you. It’s fairly easy. We mostly use rope to tie the balls.”

The whole interview lasted no more than five questions. I was hired on the spot. Amy offered to introduce me to the other women, and the first thing I saw when I walked into the “Girls Lounging Room” was titties. One woman walked by me with her perky breasts out, in stockings and heels. She was headed to the full-length mirror that took up an entire wall of the room to apply makeup. When I recovered from the initial shock of the various states of undress around the room, I felt like I was home. My former master in Colorado was a nudist, and I’d spent most of my time at his home in the nude. When I saw the laid-back approach to nudity in the lounge, I knew I would like it there. Everyone was comfortable with their body. I struggled with my own body and it was a relief to see others so confident and uninhibited. If a woman with B-cups could walk around strutting her stuff, surely my triple-D’s could find some confidence. I had walked into a subculture I could call my own.

But my first week there, I worked four eight-hour shifts without a single client picking me, and four hours into another shift, around 1:10 a.m, I just started crying. Having several “meets,” which is what we called greeting clients, with not one of them choosing me, made me wonder if something was wrong with me. Amy reassured me that the first couple weeks were always rough. Clients came for the fantasy and sometimes their fantasies just didn’t include women of color. As a four-foot-ten black woman, my physical characteristics didn’t really scream dominatrix. But still, I was irritated that the white women had steady clients and the brown women were doing other work or sleeping in the lounging room just waiting for someone to be in the mood to pick them.

My friend Heidi is a churchgoer. One day after a particularly taxing shift at the dungeon I found a photo of her with her hands raised on Facebook. I was belligerent and angry about the Christian faith because of my upbringing; my father was a religious zealot and a pastor. I thought that church folk couldn’t possibly understand suffering, much less devotion. Heidi was 95 percent averse to me coming to church with her. The reluctance she showed was evident in her posture. I basically had to invite myself along because she knew I was sensitive and angry about church folk. I wanted to believe in something but I hated them – Christians, I mean. I cannot say what changed my mind about going to church. Like I was prone to switching in the lifestyle, perhaps I was just prone to changing my mind. Heidi was an amazing person and I trusted her. I felt like I could be honest with her about my life and she didn’t judge me. I figured if she could tolerate and embrace Christianity, surely I could give it a try.

I reached the threshold of this warehouse-like structure in Bushwick, Brooklyn, and I recoiled at all the smiling faces. The only indication that it was church and not a party was the folded sign on the floor in front of the warehouse that read “welcome.” I considered turning back, but it was too late. Heidi, the only woman there with a bright red Mohawk, had already spotted me and motioned for me to join her. The welcome team was in full socialization and greeting mode. The more people who said hi to me, the more I felt like nails were being driven into my skin. They didn’t know who I was. I couldn’t possibly belong there.

When people began to get up, jump up, dance and worship, I stood awkwardly with my hands at my sides. I couldn’t understand what I was doing at punk rock church. The strobe lights were in full swing and the words to the song “Grace Comes Like a Wave” were being projected onto the wall behind the band I refused to sing along to. At one point, I got tired of standing so I just sat down, which crystallized for those around me that I was definitely a visitor.

What finally got to me was a video of a member of the church telling her story. She told us about her struggles with heroin and how when she joined the church she felt unlovable, but Jesus changed her life. I remained skeptical, but then I noticed that the person on the screen was actually sitting in the row in front of me. She was doing that infernal smiling thing and she looked genuinely happy. She was white and had long curly hair, and when the official greeting time came she gave me a hug.

The devotion she showed in the video was something I could understand. I could understand worship; the idea of giving yourself entirely over to something. In the lifestyle, we had terms like foot worship and body worship, but the whole aspect of giving yourself up to another person just felt spiritual. As a submissive, I realized that my higher power was my dominant. This dominant became responsible for my wants and needs. In return, I gave the dominant my allegiance and my worship.

That first visit to church was not my last. I continued to go faithfully every Sunday. I enjoyed the laughter and the wholesome messages. I became a Christian. I was baptized by the pastor of this church at an evening service. I was being told that God wanted more for me and my life on a regular basis.

I also continued to work my shifts at the dungeon. My unhappiness with my work just ballooned because I was being told over and over, every Sunday, that I was the daughter of a king and deserved better. I also didn’t like the way I began to look at men. My job had changed my whole opinion of them. It warped my view. I saw all men as potential clients and I found it hard to respect them.