Growing change: Homegrown food is one safety net in a less stable world for Native Americans 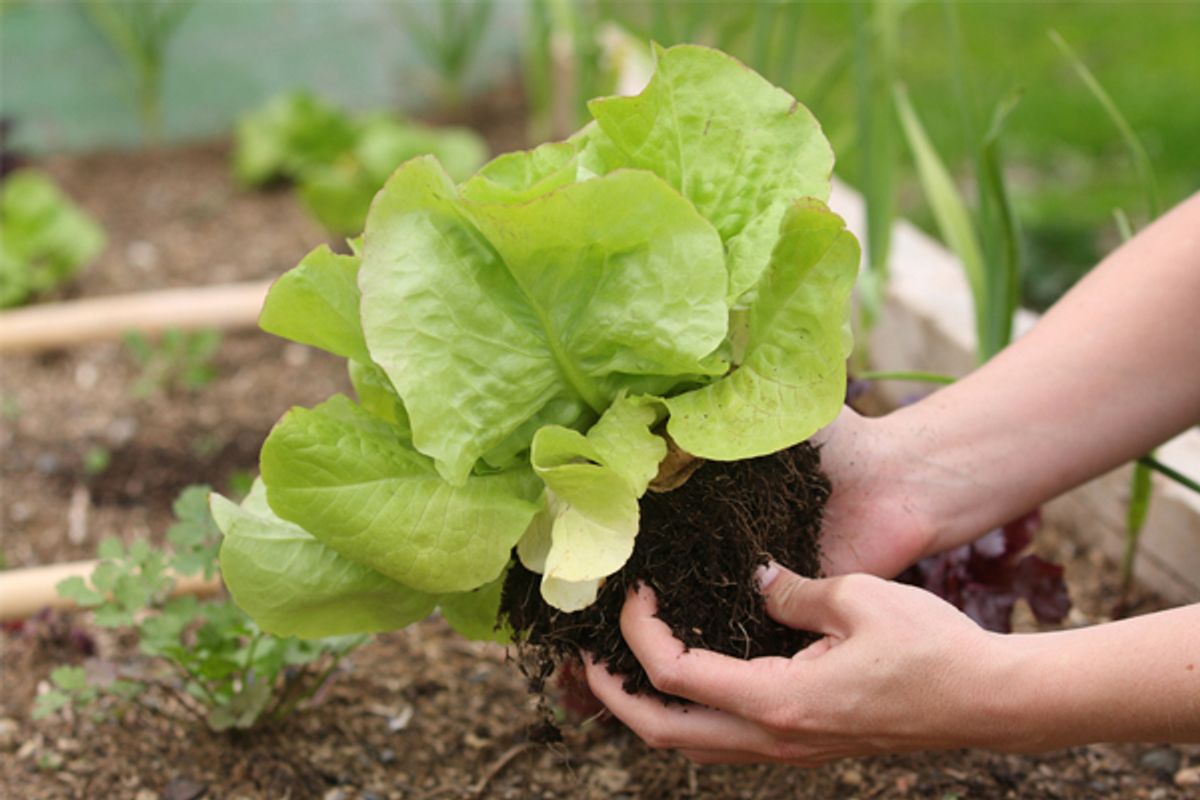 Andromeda Na’lniitr’e’sdvm Lopez grew up on canned meat, canned juice, white flour and evaporated milk. It was common fare for her tribe, the Tolowa Dee-ni’. But at 21, Lopez had a diabetes scare while pregnant and knew her diet had to change.

“I didn’t want to continue eating the way I was raised,” she said. Lopez, now 30, is a single mom in the far northwestern corner of California, where the Tolowa Dee-ni’s' traditional home is cut into a quilt-work of reservation, county and city land. She tries her best to include vegetables in every meal, but Lopez said it gets expensive.

That’s why on Wednesday afternoons in the summer, Lopez drives five miles down a two-lane highway, past cow pastures and lily fields, to a garden planted on tribal land in the town of Smith River, California. It’s a beautiful place to put your hands in the soil; mountains and redwoods rise on one side, while fields give way to an ocean view on the other.

Lopez weeds and harvests along with other volunteers and in return takes home about 10 pounds of tomatoes, squash, pumpkins and peas every week. She plans meals such as soup and stir fry around those veggies.

In Del Norte, the Tolowa Dee-ni’ and community food council (a group that organizes around healthy eating) are expanding community gardens. So far, they’ve funneled more than 1,000 pounds of produce into early learning programs and meals for community elders. This year, they’ll create four new food forests by planting dozens of perennials like fruit trees, berry bushes and traditional crops, with support from the U.S. Department of Agriculture and United Indian Health Services.

Local gardens are a budding solution to the food insecurity that plagues indigenous communities. From California to New Mexico to Maine, Native Americans are growing what they eat more and more. Climate change makes these efforts especially urgent, said anthropologist Darren Ranco of the University of Maine in Orono. Homegrown fruits and veggies are good for health and a bulwark against a climate-uncertain future.

Before Europeans arrived in North America, Native American cuisine varied greatly from location to location. Lopez’s people relied on the abundance of the Pacific coast: elk and deer, salmon and smelt, berries and acorns. But as Native Americans were violently displaced by Europeans, many of those food traditions were lost.

“When you pick up a people and forcibly remove them . . . you’re disconnecting all those connections with food,” said attorney Janie Hipp, former senior adviser for tribal relations to President Obama’s Agriculture Secretary Tom Vilsack.

Making matters worse, grocery stores are hard to come by in the remote and isolated areas often allotted to Native Americans. The U.S. government does provide monthly supplies, but reservations stay mired in poverty and dependent on outside forces for food.

“A lot of our food does come from the likes of a Walmart Supercenter,” said Zach Ducheneaux of the Cheyenne River Sioux Indian Reservation in Eagle Butte, South Dakota. Out there, three grocery stores and a handful of fast food joints serve a region the size of Connecticut. “Save up to afford a ride to town,” he said, “fill up the back of the truck with cheap food.”

The problem is perhaps starkest on America’s largest reservation. Across the 25,000 square miles of Arizona, New Mexico and Utah that comprise the Navajo Nation, three-quarters of households are food insecure (the highest rates in the country). People eat at gas stations and quick-marts. There are only 10 grocery stores for an area the size of West Virginia.

California’s Tolowa Dee-ni’ Nation has the same issue. Only two grocery stores serve the community and the rest of Del Norte County. Residents have to drive up to an hour for fruits and vegetables. Convenience marts, with their unhealthy options, are often much closer.

Fixing this problem is going to take a whole lot more than swapping gas station Cheetos for imported bananas, though. “To deal with food insecurity, health, nutrition and lack of economic development, we need to look inside these communities, to the land we’re standing on," Hipp said.

In northern California, the Tolowa Dee-ni’ and larger community are doing just that. Out there, more grocery stores aren’t the best option, said Angela Glore of Del Norte’s community food council, because people live spread out across 1,300 square miles. Gardens are a better alternative, she said. They provide healthy meals while training local people to grow their own food.

“There’s a real interest in learning how to produce your own,” said Brittany Rymer, also of the food council. “But those skills have been lost through generations.”

In the first summer after they were expanded, the Smith River gardens yielded 600 pounds of fresh fruits and vegetables. And that first winter, they produced 500 pounds of squash. That food went into hot lunches for elders of the Tolowa Dee-ni’ Nation and into the kitchens of garden volunteers. Pumpkins and winter squash also went to Smith River’s Howonquet Head Start program. Workshops on beekeeping, container gardening and canning preserves also bring the promise of self-reliance.

Over the next year, the four new food forests will take root at local schools and community institutions. The beauty of food forests, Glore explained, is that once established, they don’t need the same daily watering and attention as smaller garden plots. Forests are ultimately low maintenance.

No one knows how much food these gardens will eventually grow, but one semi-dwarf apple tree can produce up to 400 pounds of fruit a year. Each new garden might have 20 of these trees intermixed with many other species. That’s 8,000 pounds of apples annually — just one of many crops — that will feed people like Lopez and her nine-year-old daughter.

“I didn’t go out there thinking I was going to get paid in vegetables,” Lopez said, laughing. She started volunteering for stress relief and exercise. But the free food has been a financial help. “Not having to spend that extra money, I could consistently provide those meals for [my daughter].”

Still, entrenched attitudes and eating habits are hard to overcome. When Lopez changed her diet 10 years ago, her family raised a collective eyebrow. And today at community gatherings, the food is still mostly unhealthy, she said. “When you throw a salad out there, [the elders] want to know where the hell the bread is at.”

Those old ways of thinking may change as food access improves. But community gardens still won’t be a panacea, solving all tribal food woes in all places.

The biggest hurdle for gardens, said horticultural scientist Kevin Lombard of New Mexico State University, is keeping people interested and invested. Not everyone likes working out in the sun and rain. “The culture that we’re in now is pretty much fast-paced, fast food. It’s more of a lifestyle issue than anything else.”

Gardens aren’t the only answer. But they’re a start. And homegrown food, Ranco of the University of Maine said, protects health and prepares Native American communities to survive climate change. As weird weather threatens food supplies around the country, he said, healthy groceries will be even harder to find in remote and rural areas. Homegrown food is one safety net in a less stable world.

Indigenous peoples are already central in the fights for clean water and against global warming, he said. Food may be next.