Blind cleric behind 1990s terror plots dies in US prison 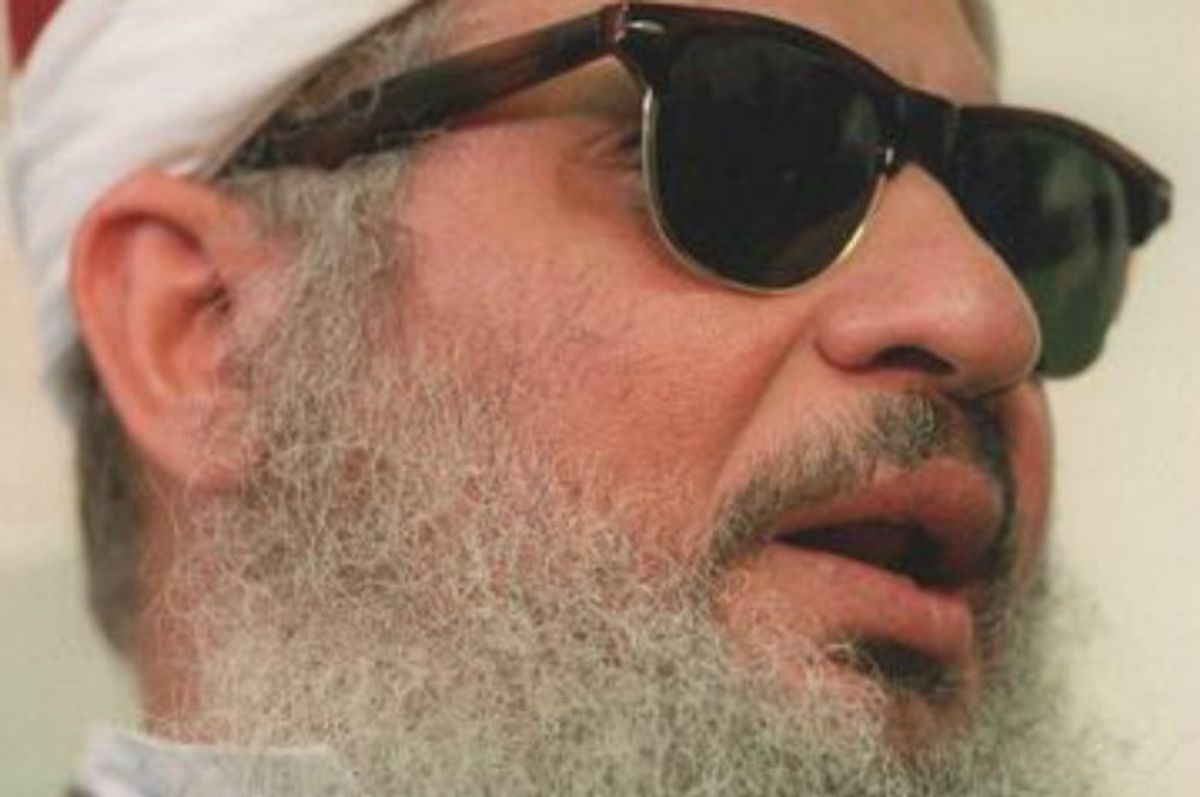 Omar Abdel-Rahman, the so-called Blind Sheik convicted of plotting terror attacks in New York City in the decade before 9/11 and spiritual guide to a generation of Islamic militants, has died in a federal prison. He was 78.

"We are saddened by your departure, father," the cleric's daughter, Asmaa, tweeted in Arabic.

Abdel-Rahman was a key spiritual leader for militants and became a symbol for radicals during his decades in U.S. prisons, where his captivity inspired plots, protests and calls for violence. The only person charged in the U.S. in the Sept. 11, 2001 attacks, Zacarias Moussaoui, had said he was training for a mission to fly a jet into the White House if the government refused to free Abdel-Rahman.

Blind since infancy from diabetes, Abdel-Rahman was the leader of one of Egypt's most feared militant groups, the Gamaa Islamiya, or the "Islamic Group," which at its height led a campaign of violence aimed at toppling that country's onetime president, Hosni Mubarak.

Abdel-Rahman fled Egypt to the U.S. in 1990 and began teaching in a New Jersey mosque. A circle of his followers were convicted in the Feb. 26, 1993, truck bombing of New York's World Trade Center that killed six people — eight years before al-Qaida's suicide plane hijackers brought the towers down.

Later in 1993, Abdel-Rahman was charged and later convicted as the leader of a group that conspired to bomb the United Nations and other New York landmarks, including the George Washington Bridge and the Lincoln and Holland tunnels.

Those attacks were never carried out, but U.S. District Judge Michael Mukasey, who later became attorney general, told the defendants at sentencing that if the plot hadn't been thwarted it would have: "brought about devastation on a scale that beggars the imagination, certainly on a scale unknown in this country since the Civil War."

Abdel-Rahman was also convicted of plotting to assassinate Mubarak.

Defense lawyer Ron Kuby, who once represented the sheik, said Abdel-Rahman's war was with a corrupt Egyptian government and he believes there was insufficient evidence to link him to the New York plots.

"I'm not in any way defending his vision," Kuby said. "He was an Islamist, he believed in Sharia law and that's what he wanted to see in Egypt. But he bore no malice toward the United States or the American people."

Since his imprisonment, Abdel-Rahman's influence had been seen as more symbolic than that of a practical leader. His Gamaa Islamiya, which led a wave of violence in the 1990s against Western tourists, Egyptian police and Coptic Christians, was eventually crushed, and its leaders — jailed in Egypt — declared a truce.

Abdel-Rahman's activities pre-dated Osama bin Laden's formation of al-Qaida in the late 1990s. But he was an influential figure in the generation of Islamic extremists that emerged from Egypt in recent decades.

He shared an ideology with another prominent group at the time, Islamic Jihad, that rejected the governments of Egypt and other Arab countries as infidels that must be overthrown by force.

Throughout his militant activities, however, Abdel-Rahman was faced by rejection by some fundamentalists, who argued that Islamic law forbids a blind man from being a commander.

Born in the Egyptian Nile Delta village of al-Gamalia in 1938, Abdel-Rahman was blind by the age of 10 months. Still, he said in his autobiography that he memorized Islam's holy book, the Quran, by age 11.

He attended Cairo's Al-Azhar University, a center of Islamic scholarship and then began preaching as an imam in a mosque in the oasis of Fayyoum, an agricultural area just south of Cairo.

He quickly ran into trouble as he turned toward a radical interpretation of Islam that holds that those who don't follow a strict version of Islamic Sharia law are infidels.

After the death of Egyptian President Gamal Abdel-Nasser in 1970, he told followers not to pray for the soul of the leader of secular Arab nationalism because he was an infidel. That got him eight months in prison.

After the 1981 assassination of President Anwar Sadat by Islamic militants, Abdel-Rahman was jailed and accused of sanctioning the killing. He was later acquitted. He escaped several later scrapes with the courts — acquitted in 1984 of plotting to overthrow the government and in 1989 of sparking anti-government protests in Fayyoum.

In 1989, after Iranian leader Ayatollah Khomeini called for the death of British writer Salman Rushdie, Abdel-Rahman issued a similar fatwa ordering the death of Egyptian Nobel-winning novelist Naguib Mahfouz for writings some Muslims considered blasphemous. Mahfouz, who died in late 2006, was stabbed in 1994 by a radical who said he was following Abdel-Rahman's edict.

Before moving to the U.S., Abdel-Rahman travelled to Afghanistan and Pakistan, where he became a spiritual leader for the mujahedeen, then fighting Soviet troops with help from the Central Intelligence Agency.

Even though Abdel-Rahman was on a list of suspected terrorists and thus banned from the U.S., he managed to enter the country in 1990 because of a bureaucratic blunder. He was given permanent residence status under the name Omar Ahmed Ali.

Efforts to free him gained new strength when Islamist Mohammed Morsi was elected as Egypt's president and vowed to free the blind sheik in 2012. Before Morsi was ousted a year later, Abdel-Rahman's supporters staged a series of sit-in protests outside the U.S. Embassy in Cairo demanding his release.

Since Morsi's ouster by the military in July 2013, Egyptian authorities have taken an uncompromising stand on Islamists, and hundreds have been killed in street clashes in 2013 and 2014 and thousands jailed.

No information was immediately released on burial plans.

Any possible effort to repatriate the body to Egypt and hold a funeral there would likely draw thousands of mourners, mostly Islamists, thus raising the specter of clashes with the police.

Egypt has effectively banned street demonstrations since November 2013 and security officials said contacts were already underway with leaders of the revived Gamaa Islamiya to ensure Abdel-Rahman's burial and funeral are peacefully held.

Abdel-Rahman had two wives and 13 children.

One of his sons, Ahmed, was killed by a U.S. drone strike in 2011 in Afghanistan, where he was fighting U.S. and NATO forces.

Melley reported from Los Angeles and Keath reported from Cairo. Hamza Hendawi in Cairo and Julie Walker in New York contributed to this report.