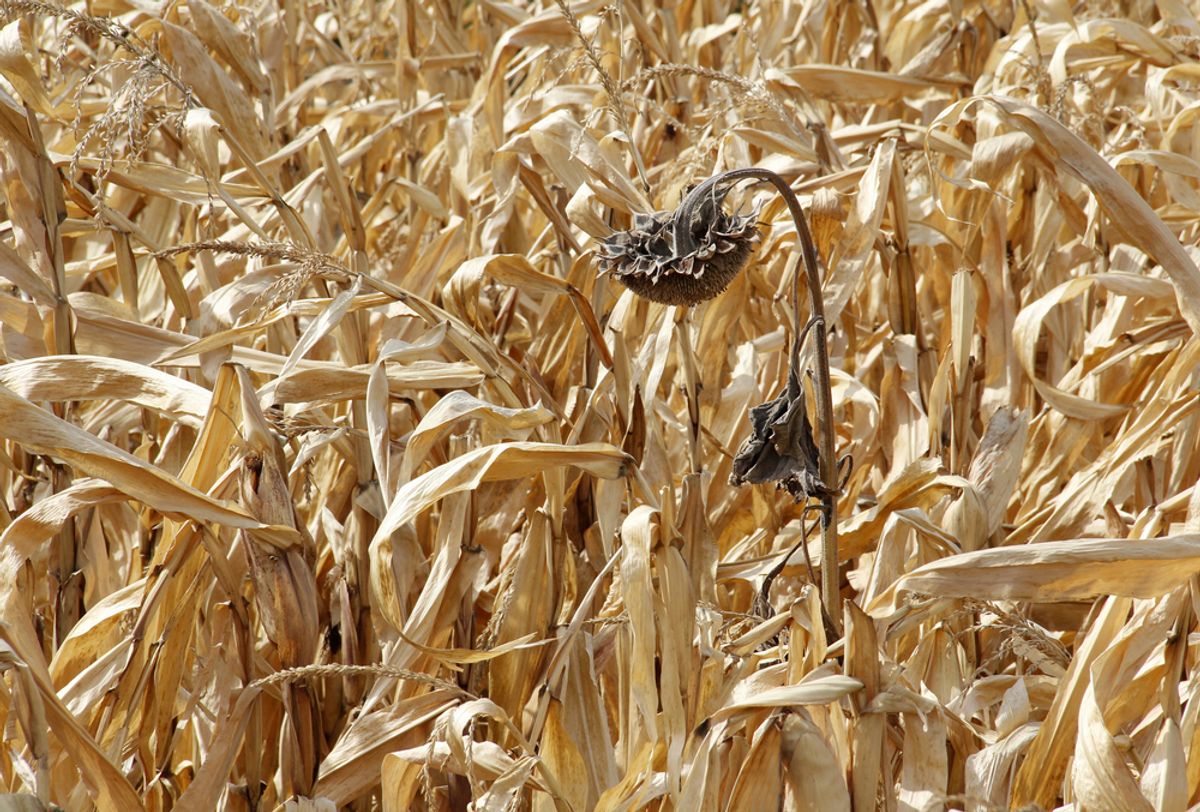 You can chart Amadeo’s life journey by his clothes. He grew up poor in rural Mexico — “I couldn’t even afford to buy pants,” he said. He got a job in the city, but was making so little that he lived in terror of ripping his only pair of trousers. He migrated north to the factories at the U.S. border and then into the United States, each time taking jobs that made it a little easier to buy the basics — a jacket, work boots, socks.

His journey seemed at an end when he reached California. By working in the fields there, he was able to make enough to afford not just clothes, but also decent housing, with some extra to send home. One day, he struck up a conversation with a pretty girl in a strawberry field, and then they were exchanging vows, and then buying onesies and diapers.

Today, Amadeo is an athletic man on the brink of middle age, his hair buzzed down to his scalp. His boys bounced in and out of frame of our video call, lunging at the camera and waving, then just as quickly going shy. He has two kids: a cute two-year-old who wore a green hoodie and a pudgy five-year-old with a thick halo of black hair sticking straight out of his head, both of them U.S. citizens, unlike their father. The older boy carried a football, catching his own passes and evading his brother as his father told me his story.

For the past decade, Amadeo felt more and more comfortable in the United States. But that’s changed since President Trump’s election. After all, Trump said he was going to deport everyone in the country without legal documentation, and he hasn’t hesitated to issue orders to carry out other campaign promises. Last week, immigration officers initiated that crackdown, arresting some 680 people.

The farmworkers I talked to are wrestling with two conflicting feelings: They feel anxiety — sometimes verging on panic — but they also don’t fully believe they will be deported. Some of them may be right. The recent “immigration enforcement surge” has gotten a lot of media attention, but even if the government manages to deport everyone who was rounded up last weekend, it would need to more than triple its pace just to match the Obama administration, which deported 409,849 people in 2012.

There are some 11 million undocumented immigrants in the country. In California’s farmland, the sheer ubiquity of people without official papers makes mass deportation of millions seem improbable, and yet people are afraid, Amadeo said.

“It feels like . . .” he turns to the man translating his Spanish to English. “What do you call what the government is doing? Is it violence? Is it discrimination?” He shrugged. “Well, it affects us a lot.”

Trump tapped into a fear that immigrants were streaming into the United States and changing the fundamental nature of the country. There are hundreds of thousands of farmworkers like Amadeo living in the United States without papers. They came, mostly, from Mexico.

But most of these farmworkers have been here for over a decade. That’s long enough for them to integrate into a community and begin to see their American children living out the American dream. But now many immigrants worry that dream is slipping away.

Early in his campaign, President Trump said that he would deport all 11 million people living in the United States without papers. No one knows if he will try to deport them all, but Trump’s actions and his Cabinet picks suggest he intends to push a lot of people out.

As the famous Reagan administration saying goes, “personnel is policy,” said Giev Kashkooli, legislative director for the United Farm Workers. Kashkooli has some hope for Homeland Security Secretary John Kelly, because he acknowledged, during confirmation hearings, that most people coming to the United States from Central America today are fleeing violence. But he’s dismayed by Attorney General Jeff Sessions, who fiercely opposes amnesty for people like Amadeo. Kelly is in charge of arresting undocumented immigrants, while Sessions controls the immigration courts.

Still, pure logistics could prevent mass deportations. The Department of Homeland Security would have to hire thousands more immigration officers to force out all undocumented immigrants — it would be a massively expensive undertaking and require years to ramp up, Kashkooli said.

It would also cause chaos for U.S. agriculture. No other sector of the economy is more dependent on undocumented employees, who make up between 50 and 70 percent of hired farmworkers. Farmers are worried about Trump’s promise to deport their workers. Mass deportations could trigger farm foreclosures and speed the replacement of workers with machines. Some are buying new machines to replace laborers in case Trump keeps his promise.

But, perversely, Trump’s policies could also have the opposite effect: a new influx of undocumented workers. Trump has said he’d tear up the North American Free Trade Agreement and suggested imposing a tax on Mexican imports.

“There could be such disastrous consequences for the Mexican economy that it may lead to a surge in immigration,” said Daniel Sumner, director of the University of California Agricultural Issues Center. The value of the peso has already tumbled, which makes the prospect of earning money in dollars more attractive.

Over the last three decades, however, Mexico’s economy has seen solid growth, shrinking the flow of immigration to the United States. The country has undergone what economists call a structural transformation: Rural farmers moved to cities, factories sprang up, incomes rose, and population growth leveled off. As a result, there are no longer many Mexicans who want to cross the border. “Immigration from Mexico has slowed to a trickle,” Sumner said. Now, there are more Mexican citizens leaving than coming.

Because of this, the average undocumented farmworker is a lot like Amadeo — they’ve been here for years and put down roots. Another farmworker I talked to, Oscar, had a similar life story. He was set into motion by poverty, but also by tragedy: His mother died when he was young, and he began working on farms in Mexico at the age of 10. He’s been in the United States 11 years. He met his wife here. They settled in California and have two daughters. When we spoke, he’d just been laid off, but he wasn’t worried.

“Fortunately I don’t have any vices — I don’t drink, I don’t smoke, I’ve been good about saving money — eventually work will start again,” he said. “But I’m very worried about Trump.”

Oscar recently applied for his daughters to become Mexican citizens, in case he and his wife are deported. But his older daughter was adamant: She would not leave. Oscar has always imagined her going to school and making a career in California — even becoming a U.S. senator. But now that vision is wavering.

“We hear the message loud and clear from the government: ‘We don’t want you here,’” Oscar said.

Kashkooli of United Farm Workers told me that rather than initiating mass deportations of 3 million to 11 million people, the government may be hammering home that message with a few high-profile raids. “What [Trump] can do is create mass fear with raids,” he said.

California politicians have vowed to fight mass deportations, and the public has grown increasingly friendly to immigrants. In 1998, Californians voted to ban conducting school in both Spanish and English, but last year, 73 percent of voters cast ballots to reverse that proposition. The state legislature is considering bills to pay for lawyers to represent undocumented immigrants.

The struggle for a better life

On the day I talked to Amadeo, his clothes were decidedly Californian. It’s clear he can afford to buy pants now. His outfit was clean and functional, but not fancy: a black, long-sleeved shirt and a puffy red vest.

The threat of deportation amounts to a constant rasp of stress for Amadeo, yet at the same time he can’t imagine a future for his family in Mexico.

“We are really tired of the poverty in Oaxaca,” he said.

Amadeo was born in rural Oaxaca to parents who fished for shrimp and burned sections of forest to grow corn. It was a humble life, he said, without money to buy the basics. So he moved to the city at the age of 15, where there was work to be had, but wages were still pitifully low.

“I was working so hard just for these meager things you need to survive,” he said. At 19, he found higher-paying work near Ciudad Juarez, a short walk from Texas.

When he first crossed the U.S. border, it was just to go shopping for clothes. He and some coworkers from a factory in Ciudad Juarez walked through an old canal into El Paso. They made the trip a few times, wandering around the city, marveling at the novelty of the United States, and then they’d return the way they came when darkness fell.

When he decided to take work in the United States, he planned to return to Mexico after a few months. But there was always another job washing dishes or harvesting crops. All the jobs paid much better than work in Mexico, and he began saving up enough to send money home to his parents. In California, he was able to build a decent life for his young family.

That’s not to say it was ever easy. He’s often up at 4:30 a.m. to take his kids to the babysitter. Then he works in the field — in sun or rain and mud — often until 6 p.m. During harvest, he sometimes works seven days a week and hardly sees his family. But because of this work, he’s been able to watch his boys grow up and play American football and also take for granted a far more prosperous life than he had ever hoped for himself.

The argument for limiting immigration rests on the conviction that a country must put its citizens’ needs first, rather than trying to embrace the whole of humanity, and that a country cannot survive too rapid a pace of cultural change. But the things that worry immigration-hawks don’t apply to the bulk of farmworkers, like Amadeo and Oscar.

These farmworkers are no longer outsiders — they’ve become our neighbors, they’ve assimilated into communities. They aren’t a drain on scarce resources — they support themselves. And, as Oscar pointed out, they support us, too.

“I wish people would realize that it’s because of us,” he said, “that the rest of America eats this beautiful harvest.”