What being "a real one" really means

Everyone wants justice for Freddie Gray. But could Freddie Gray have called you if he needed a job reference? 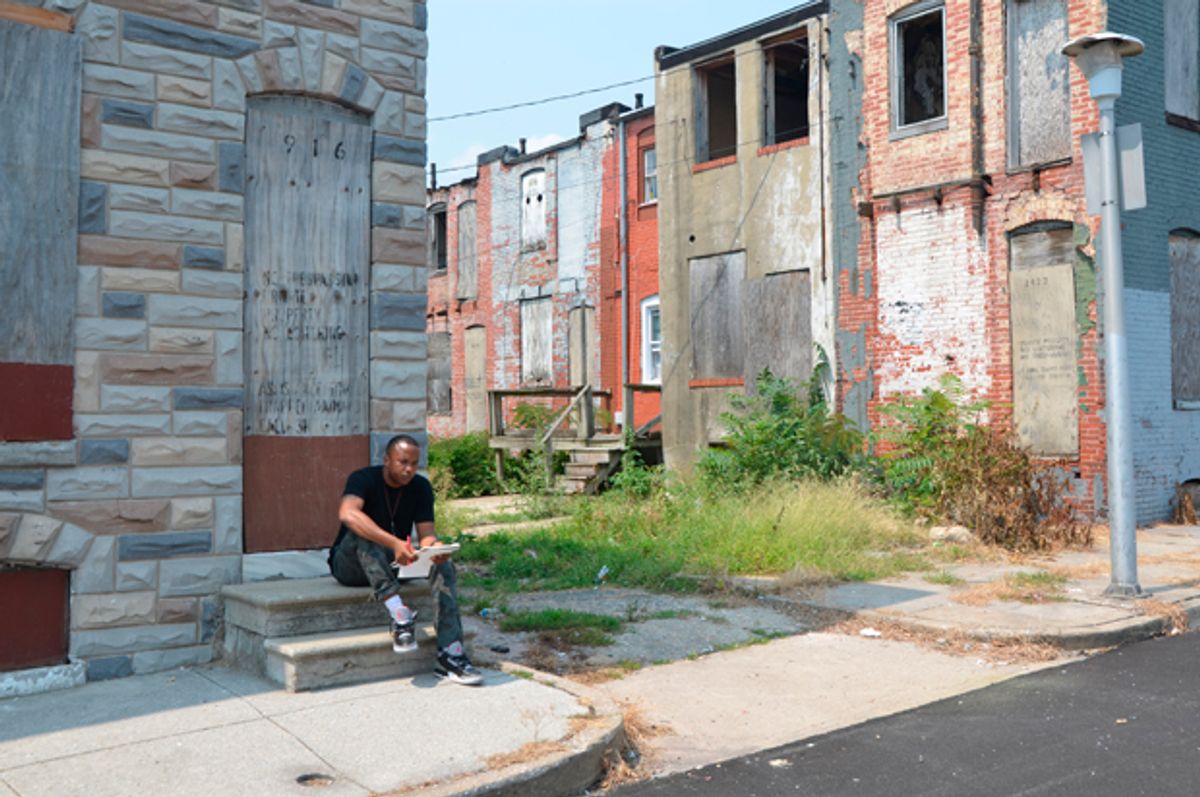 A photo of the author in East Baltimore.
--

Being a "real one" and "keepin' it real" are terms that are always tossed around but often misunderstood. Many may claim realness, and yet fail to meet its simple requirements.

Earlier this week, I wrote about running into an old friend, O.G., on the street in Brooklyn, and going back to his block to meet his friends. When O.G. and his friends called me "real," it was more about my accessibility and how we engaged than that scene of my guzzling a cup of Hennessy outside in an unfamiliar neighborhood (forget about calling women "bitches" or claiming to be gangsta, as these are things that I don’t do).

Most people, though, tend to tie being "a real one" to those types of behaviors, in addition to doing hard drugs, fighting for no reason, never putting the toilet seat down and all other forms of hypermasculinity. This is a false definition. For example, you can participate in thuggish actions and still be fake, like criminals who commit crimes and then constantly save themselves by snitching on other criminals.

And the reverse is true, too: There's the black guy who comes into the hood and brags about being the only black guy on his job, but never tries to help anyone else from the neighborhood get hired. He made it, white people love him, and that’s enough.

I used to play basketball twice a week at Johns Hopkins University in the student, faculty and employee game. There was this medium-built curly headed West Baltimore dude named Paul who basically owned the gym. No, he didn’t have a deed to the property, but he could hit shots from anywhere on court as if it were his home. And it didn’t matter if you pushed him, kicked his leg or hung from his arm, his shots would fall. Dude was easily the best player in attendance every week. I never really had a problem with him, but some of the guys in the gym did. Paul was sort of a blabbermouth — like most 20-something, non-pros with freakish talent.

One day he walked into gym with a heavy face and addressed a couple of us on the sideline. “I really need a job, man,” he said. “Do y'all know of any spot that’s hiring? I’ll do anything. I just want to take care of my kids.”

A grad student and I exchanged numbers with him, as I was in between jobs myself at the time and figured we could work together on finding employment. One of the black professors sitting near of us popped up, shrugged and yelled, “Split the teams up, guys! I’m ready to play!”

The professor and Paul ended up on opposite sides, and as usual, Paul put on a show, shooting his lights out, making half of his baskets from two or three steps behind the 3-point line. Toward the end of the game, Paul called a foul on the professor. The professor didn’t agree with his call, and it turned into a huge argument between them. A few of us stepped in and mediated, but the professor quit the game.

“I should never have to argue with a person like you," he said to Paul. "I’m a John Hopkins professor and you can’t even find a job!”

We all looked at the professor like he had lost his mind as he stormed out.

“Damn, I just made a call,” said Paul. “I didn’t know that he would attack my personal life!”

Now, don’t be fooled. This black professor also looked the part: He dressed like a person who many would identify as "a real one." He wore a fade like Nas, Air Jordans and even a little gold chain. But it’s all a facade. The professor, like many others, loves to look like the dudes from the hood and even act like he's from the hood, using that brash ghetto bravado when it pays dividends. But guys like that will reject any and everything black when a real hood dude walks in the room — or when they get the opportunity to gain white validation.

That professor is not alone. These incidents have happened to me all over the publishing world. Imagine owning a bank full of hood quotes, perks and experiences that you can draw from whenever you want and never have to deposit anything back into. You don’t even have to acknowledge it. There are plenty of writers, reverends, street dudes, pin- and button-heavy backpack Air Jordan nerds, 'fro-patting soul sistas and down brothas who use words like "cisgender" and "intersectionality" flexing their identities, applying pressure to white liberals in the name of the people, but they don’t really know the people, outside the other famous entertainers, tweeters and other public figures. They kiss up to their fellow stars but disrespect the limo drivers and scream at waiters who make one mistake, all while profiting from the real pain of the black experience in America while doing absolutely nothing to enhance it. Their actions make me struggle with representation.

How can you speak for me, if you don’t know anyone like me?

Everybody is running around screaming, “Freddie Gray! Trayvon Martin! Mike Brown!” but did they know them? Do they socialize with people like them? The real question is this: Could Freddie Gray have called you if he needed a recommendation for a job? Because the whole world wants justice for Freddie now, but it wasn't worried about his justice when he was alive and out here trying to make it.

The same goes for Mike Brown in Ferguson. Could Brown have reached out to you if he needed help finding college scholarships or advice on interview etiquette? Would you have shaken Trayvon Martin's hand? Really, would you have? Because I know TV show hosts and writers who cover these issues, and activists who have zero proximity to real people. Many of them can't touch real people from the ivory tower, so they don’t really understand the issues beyond talking points, which is why the same systemic issues have been lingering since my parents' parents were kids.

Do you really want to keep it real?

Accessibility is the first step toward the road of understanding. Venture into the spots and spend time with the people you imitate and cover from a drone-like distance. Teach them how you achieved your goals as an artist or journalist or other professional so that we continue to grow and strengthen the black narrative. Be available. Don’t brag about being the only minority in the office. Get somebody else hired on. What's more valuable than a mentor whom you can call, see or touch?

An alternative to the professor I described above is the writer Wes Moore. Wes is talented, accomplished, doesn’t try dress like anyone other himself and he helps people. He doesn’t have to play hood; he helps young people from the hood work toward gaining the same type of success that he enjoys. Because contrary to what you may believe, black people don't want handouts: Just in case you forgot, our ancestors built this country through brutal and harsh slave labor. We just want a fair shake like everyone else.

It's a running joke in our community that we have to work 20 times as hard to achieve the same success that other races enjoy (for example, Barack Obama's road to the White House versus Donald Trump's). Hopkins professor Karl Alexander proved many of those jokes true when he published "The Long Shadow," a 35-year study showing that whites with jail records and higher reported drug use still had way more opportunities than squeaky-clean African-Americans who had attended college, but we already knew this. I'll never expect a level playing field in this country; if you care, however, and want to do something like many "real ones" proclaim to, please be a mentor or a resource to somebody. Live in the tradition of Fredrick Douglass and Harriet Tubman.

Douglass and Tubman were real ones, because they were free and dedicated their lives to free other black people, and that’s real. Not enough of the go-to voices of these movements are doing that; I believe, however, this can change and that's the primary reason I’d rather directly address my people than make another plea to the dominant culture. Somehow the smartest minority minds don’t understand that oppressors don’t listen­­. If oppressors listened or considered your feelings, then they wouldn’t be oppressors.