Lies and pollution: Trump loyalists are willing to poison their bodies as well as their minds

Is pissing off liberals really worth poisoning the streams in coal country and swallowing outrageous lies? 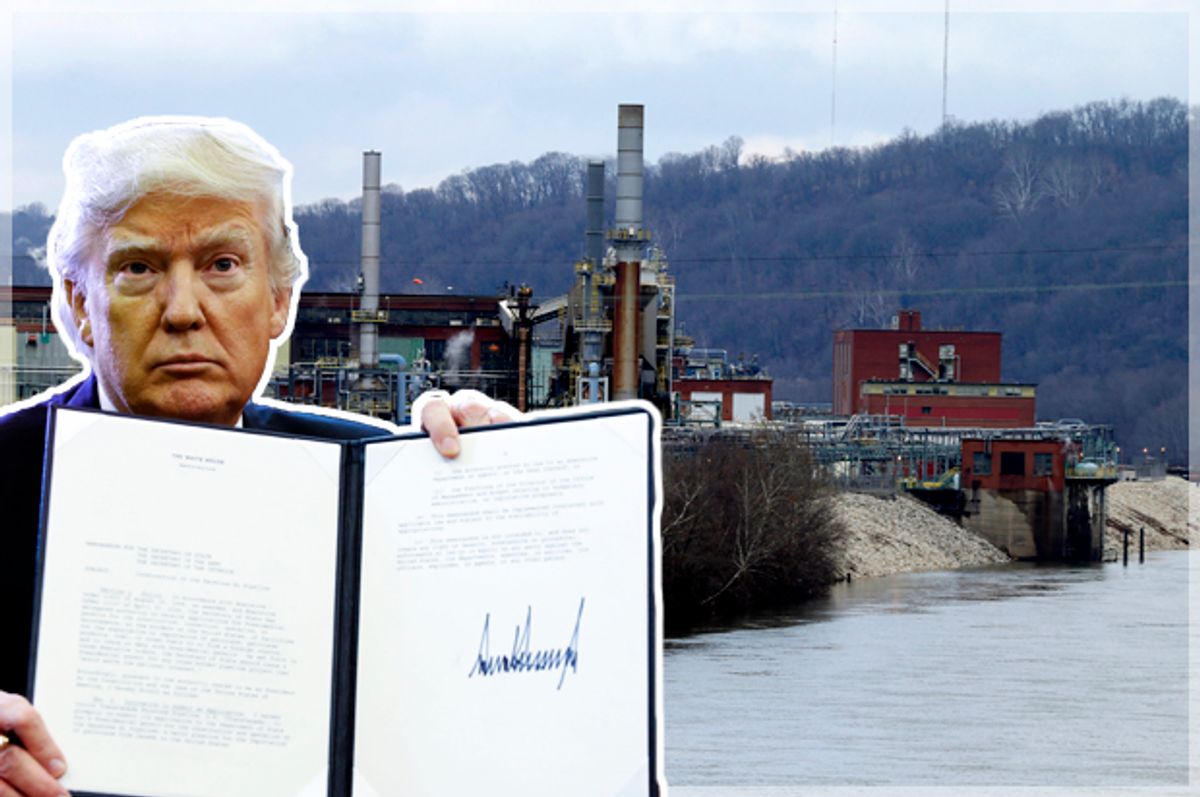 Donald Trump; A manufacturing plant is located along the banks of the Kanawaha River in South Charleston, W.Va. (Getty/Shawn Thew/AP/Steve Helber)
--

In the aftermath of President Donald Trump’s chaotic and insane news conference last Thursday, two things happened. First, the reaction from Trump’s fans was beyond orgasmic. Then Trump signed a bill into law making it possible for coal mining companies to resume dumping toxic waste into streams, rivers and other waterways.

Suffice it to say that the reviews from Trump’s disciples, to whom he was directly pandering, were overwhelmingly positive despite the fact that the president repeatedly blurted out universally recognized lies, such as claiming he’s the “least anti-Semitic” person in the world and that he had won the highest electoral vote margin since Reagan. For the record, George H.W. Bush (with 426 electoral votes) Bill Clinton (with 370 and 379) and Barack Obama (with 365 and 332) all beat Trump’s 306 electoral votes. Likewise, Trump is ranked 46th out of 58 in terms of his electoral vote margin — much closer to the bottom than the top. Sorry, Trumpers. No fake news here. Numbers don’t lie.

Trump also delivered this bit of authentic frontier gibberish: "You know what uranium is, right? It’s this thing called nuclear weapons. And other things. Like lots of things are done with uranium. Including some bad things. But nobody talks about that.” Somewhere, Sarah Palin and Louie Gohmert are breathing well-earned sighs of relief now that Trump has taken over as the dumbest human in politics.

It’s difficult to rationalize the level of blind support for a president who’s clearly mentally unfit to be chief executive of the world’s most powerful and influential democracy and whose knee-jerk antics are rapidly destabilizing it, even as the most damaging repercussions are still to come.

As I’ve been writing for a year now, Trump’s most devoted fanboys don’t appear to be schooled well enough in the finer points of political reality of how our presidential traditions serve to tenuously bind together our system of government. This allows Trump and his supporters the reckless personal latitude to blindly and ignorantly test the integrity of the system by electing and supporting an obviously unqualified game-show host as president — a berserker in chief who firmly believes he doesn’t need to be even minimally aware of presidential things like policymaking, decorum, diplomacy, statesmanship or the U.S. Constitution.

For myriad reasons, including the systematic brainwashing efforts of Fox News and what David Frum has called “the conservative entertainment complex,” Trump’s voters are unwavering in their piss-poor judgment that Trump will only make America greater, and that his long list of flaws — ones that will surely precipitate untold disasters — are irrelevant.

Additionally, these Trump voters have no problem supporting a president who just signed legislation making it legal for the coal mining industry to dump wastewater into nearby streams and rivers.

In December, President Barack Obama authorized a new rule for the Office of Surface Mining known as the Stream Protection Rule. Simply put, the rule banned the dumping of mountaintop removal mining waste into nearby waterways by creating a 100-foot buffer around streams and the like, ultimately protecting an estimated 6,000 miles of rivers. Many of those rivers provide drinking water for neighboring towns — for now. The new rule also mandated the restoration of polluted waterways and the replanting of trees.

One of Trump’s first legislative acts as president was to kill the rule. After the Senate voted 55 to 45 to overturn the rule, the bill was sent to Trump for his signature. And while we were all scrambling to make sense of “Trump at his Trumpiest,” the president signed it into law.

Apparently, clean tap water and formerly scenic vistas aren’t priorities for red state, coal-country voters who would rather add cancer clusters and horrendous birth defects to the list of woes that go along with their disappearing coal jobs. What good are a few hundred more jobs if the workers filling those jobs, as well as their families, are dropping dead from poisoned drinking water and contaminated air? A 2011 study in the Environmental Research journal discovered an increased risk for “six out of seven types of birth defects — circulatory/respiratory, central nervous system, musculoskeletal, gastrointestinal [and] urogenital” defects near mountaintop removal mines. The rate was nearly twice as high as that found in areas without mountaintop removal mines.

It’s not clear whether Trump voters in deeply red states like West Virginia and Kentucky are aware of the fact that coal mining and Trump’s terrible bill will surely add copious amounts of selenium, mercury and arsenic to the water supplies in those states — in addition to the variety of toxins present in coal slurry, ash and other waste materials. I mean, they should be aware, simply based on past experience. Surely they couldn’t have forgotten the 2014 disaster at Dry Branch, where 300,000 West Virginians were forced to go without clean tap water when chemicals used in coal extraction were dumped into the water supply. Sadly, this is just the beginning.

Let’s be clear. I get the fact that Trump voters love their guy partly because he pisses off liberals. But this is what they’re willing to endure for the privilege of trolling Michael Moore and Nancy Pelosi? Really? Allowing coal mining outfits to dump waste into coal country streams will only damage coal country and the people who live there.

We all have a right to clean water and clean air. And we all have a right to protest against the polluting of what’s known as “the commons” — natural and scenic resources that belong to everyone, not just corporate polluters. But it’s mostly Trump voters who will have to deal with the inevitable mining disasters, increased air and water contamination and subsequent health risks and birth defects that go along with it. Meryl Streep won’t have to deal with nervous system or urogenital birth defects in her neighborhood due to coal mining pollution. Neither will Michael Moore, Barack Obama, Alec Baldwin or Rachel Maddow.

Yet coal country loves Trump anyway, even as he helps the the coal industry slowly choke out his voters.

To make matters worse, Trump’s plan to repeal and replace the Affordable Care Act (otherwise known as “Obamacare”) would strip many coal workers of black lung health protections included in Obama’s signature legislative achievement. Meanwhile, Trump’s newly confirmed nominee to head the Environmental Protection Agency, Scott Pruitt, is a major defender of the fossil fuel sector and has repeatedly sued the EPA on the industry's behalf.

Trump voters are willing to risk their own lives for the sake of propping up this cartoon dictator and his crony capitalist buddies. Remarkably, it appears as if they’ll stick with their guy until the bitter end. If they can’t see the impending series of disasters lurking around the corner, they’ll learn a painful lesson only after it’s too late.