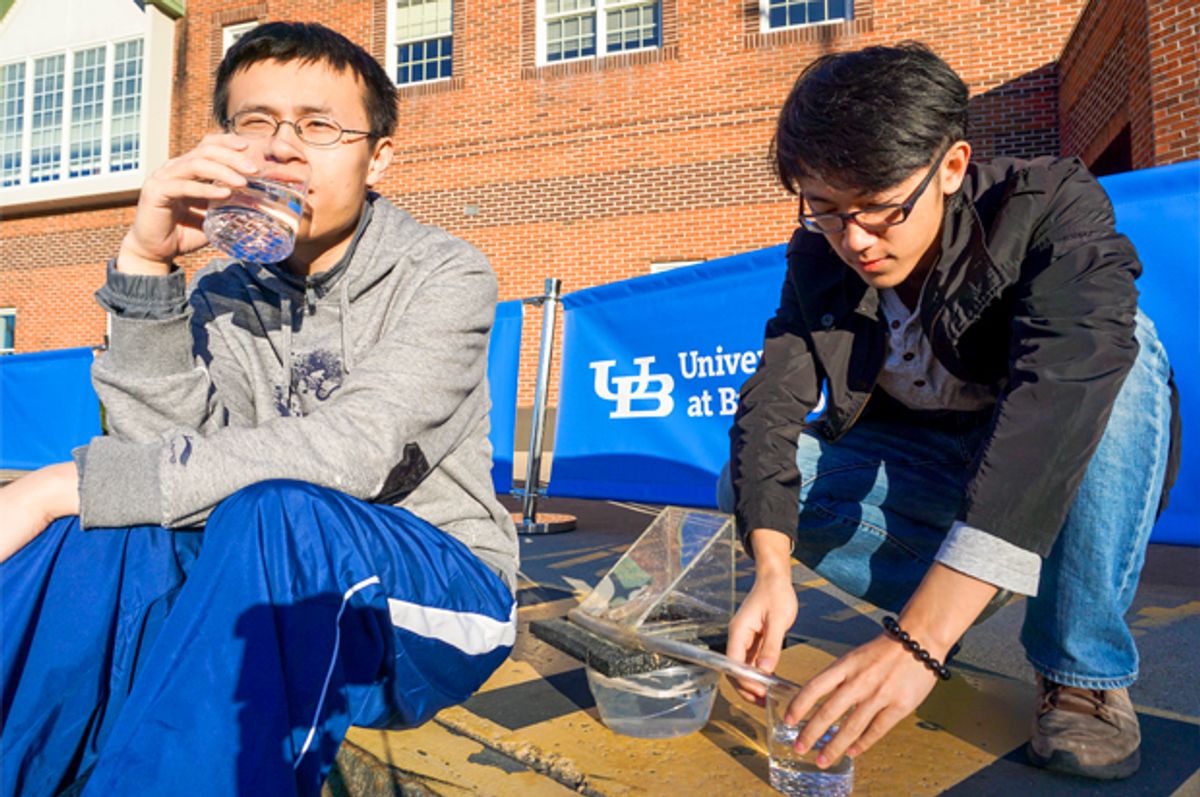 More than two-thirds of the earth’s surface is covered with water, but most of it is useless for healthy human hydration. Excluding seawater, glaciers and polar ice caps, less than 1 percent of the planet’s life-sustaining water is in lakes, rivers, streams and underground aquifers. Much of that readily available drinking water requires treatment to eradicate harmful microbes and toxins.

As a result, access to clean drinking water is limited and precarious for many of the world’s people. Water scarcity profoundly affects 1 out of 9 people, according to the Water Project, and most illnesses in underdeveloped countries are linked to poor water and sanitary conditions. Natural disasters like the 2010 Haiti earthquake or the 2004 Indian Ocean earthquake and tsunami can lead to emergency situations that affect millions of people who lose access to potable water.

The sheer number of impoverished people who are teetering on the edge of access to clean drinking water prompted a team of researchers at the State University of New York at Buffalo's school of engineering and applied sciences to figure out a way to improve solar distillation, a long-established, cost-effective yet problematic process of extracting clean drinking water from contaminated sources using simple materials and sunlight.

“We have a lot of need for this technology and we hope we can collaborate with people, organizations and agencies to develop this,” said Qiaoqiang Gan, associate professor of electrical engineering at the university and a co-author of a recent study describing a new method to improve the efficiency of using sunlight to distill clean drinking water.

The idea of using the sun’s heat to vaporize and recondense water has been known since at least the 4th century B.C. when the Greek philosopher Aristotle first described that salt could be removed from seawater using the sun’s heat to create water vapor. Such solar stills have been used since the industrial revolution, but one major drawback to the technology has been the output. Evaporation and condensation are not fast processes, and most solar stills, especially simple, low-cost ones, are unable to produce enough water to sustain one person in survivalist mode.

But rising awareness of water scarcity issues has led researchers like Gan and his team in Buffalo to apply new techniques to make solar distillation more efficient. Their solar vapor generator and condenser uses porous paper covered with carbon black, a material that has a near-zero reflectivity and therefore absorbs a higher amount of solar heat. The carbon-covered paper is then placed over floating white polystyrene foam and a thermal insulator that helps concentrate the solar heat onto the carbon layer. The device is then placed on the surface of a dirty water source while the paper acts as a sponge and the carbon as an evaporator. The vapor then condenses on the angled wall of the vaporizer, seeping into a culvert that collects the potable water.

Gan and his team have claimed that their prototype produces as much as three times more potable water as comparable solar stills, or about 4.2 cups an hour under sunny conditions. The average healthy adult needs about eight cups of water a day. Crucially, this is all done using cheap materials that can be scaled, meaning arrays of floating stills could be tapped in emergency situations to provide a considerable amount of fresh drinking water to a disaster-struck community, especially in the sunny parts of Africa, Asia and Latin America.

In November, the researchers registered a company called Sunny Clean Water and are hoping to have a production-ready version of their prototype by the end of the year.

Gan, 37, spoke to Salon about his team’s work to improve the efficiency of a renewable-energy-using technology that’s been around for a very long time.

What attracted you to this project?

Water stress is a global challenge, and it’s become more and more significant, including in the U.S. The water quality in the U.S. should be the highest in the world, but actually we still have a lot of accidents of contamination which jeopardizes our citizens’ health. Then there are those resource-limited countries and developing countries, like China and India. Everyone is interested in this issue. We feel that we can do this better.

What does this prototype do that makes it better than other methods of water purification?

Currently, the main technology for water purification is not solar energy based at all. They use reverse osmosis. This technology pushes saltwater or contaminated water through membranes so that clean water can go through. This is the mainstream technology.

But the main disadvantages are, first of all, you have to consume a lot of energy to push the water through these membranes, and secondly the amount of clean water produced is relatively small, leaving a significant amount of water left behind that has a higher concentration of contamination. This wastewater introduces more significant environmental issues. So these are the two major disadvantages.

What are the disadvantages of using solar energy to produce clean water?

A solar water still is a supplementary technology. We cannot compete with the high level of productivity of the mainstream technology [in terms of the output of clean water]. Developed areas of the world would still want to use the high-productivity technology. But our aim is to focus on areas where huge populations suffer from lack of access to clean water.

Think about, for example, Africa. We’ve received responses from South African companies that are very interested in this technology. A lot of small areas, for example islands — the people there cannot afford those energy-consuming, environmentally unfriendly high-productivity systems. Solar stills are a better option. They can provide the minimum required amount of clean water.

How much water can you theoretically produce with your solar still?

Currently our practical productivity is around 1 kilogram per hour per square meter. That means if we have 1 square meter [of contaminated water], after one hour we can produce 1 kilogram [or about 4.2 cups] of clean water under full sunlight.

It’s totally dependent on solar energy, so if it’s cloudy or raining, you should not expect as much clean water. Tropical countries have a lot of solar energy therefore I don’t think this is a big problem. Currently the practical rate of productivity is around 1 kilogram, but the upper limit is about 1.4 to 1.5 kilograms [or 6.3 cups] per hour per square meter.

The basic need for an individual is about 2 kilograms of water [or 8.45 cups] per day under full sunlight. So if we had eight hours of full-sun illumination, then we would be able to generate 5 to 8 kilograms of water, which could meet survival needs for a small family. We want to improve this performance and have a lot of engineering things yet to do.

Your prototype is about the size of a small refrigerator. A larger solar still would presumably be able to produce more clean water.

Definitely. We’ve set up a company to commercialize this technology and we plan to scale it up, much like a solar panel array with many, many solar panels in a given area. We can do a similar thing for solar water stills.

Could you use solar panels to make the solar stills more efficient by adding more heat to the evaporation process?

It’s possible. And the water evaporation could also cool down the solar panels, which is good for their performance. If we can find some collaborator in the solar-panel industry, then we can combine the systems. This would be a very good system.