Why has Trump been so slow to confront anti-Semitism? Several answers suggest themselves, none of them good

Either the president is totally clueless on this issue or he has surrounded himself with bigots. It could be both! 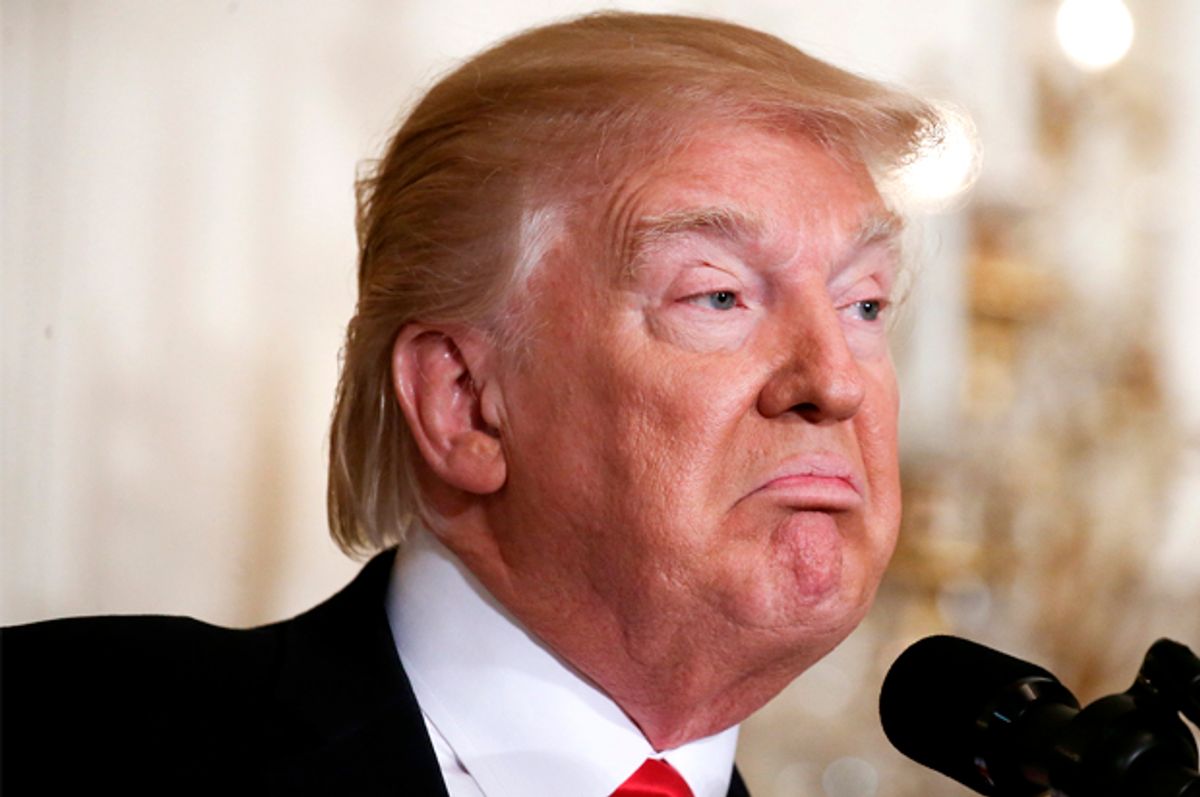 The beginning of the week saw a flood of high-profile anti-Semitism in America. First, another 10 Jewish community centers across the country evacuated after receiving bomb threats, bring the total number to 69 such incidents, by CNN’s count, at 54 different centers since January. Then came reports that vandals had knocked over and desecrated as many as 200 headstones at a Jewish cemetery in St. Louis. And that was all just on Monday!

To call the White House’s response “milquetoast” would be an insult to milquetoasts. Press secretary Sean Spicer put out an anodyne statement noting that “hatred and hate-motivated violence of any kind have no place in a country founded on the promise of individual freedom.” First daughter Ivanka Trump, who converted to Judaism when she married Jared Kushner, and is an Orthodox Jew, tweeted that America was “founded on a principle of religious tolerance,” adding that we must protect “houses of worship and religious centers.”

On Tuesday morning, President Trump weighed in with the usual incoherence that makes one wonder if that weird hair of his has choked off the blood supply to his brain. On a tour of the National Museum of African-American History, the Cheetos-colored chief executive told MSNBC’s Craig Melvin that he denounces anti-Semitism “whenever [he] gets the chance.” Which probably comes as a surprise for viewers of his rambling, deranged press conference last Thursday, when a reporter asked him about the rise of anti-Semitic incidents in America since his election and he responded by calling it an insulting question, before denying that he personally is an anti-Semite.

That Trump has enormous difficulty denouncing bigotry comes as no surprise. The man’s entire presidential campaign was one loud, angry, orange-faced appeal to prejudice, white supremacy and a long-gone American past when ethnic and racial minorities were not seen or heard. He has so far run his administration the same way as well. Some of his bigger initiatives have included the travel ban barring Muslims from entering America, pushing to repeal the Affordable Care Act and laying the possible groundwork for a voting-rights crackdown, with the latter two being moves that are certain to disproportionately harm minorities.

Still, it says something about Trump’s self-absorption that even existence of the rabid anti-Semitism found among his “alt-right” supporters does not seem to break through to the man and his White House. One can easily believe that Trump has never had extended and meaningful interactions with Hispanic day laborers or hardworking Muslim Americans and therefore is unsympathetic to their fears and everyday experiences. But he does have a circle of immediate family and friends that includes observant Jews, particularly his daughter Ivanka and her husband Jared Kushner, who comes from an Orthodox Jewish family.

So it is strange to see so many unforced errors by the administration when it comes to incidents of anti-Semitism. Though maybe it is comforting to know that the Trump White House is just as incapable of hiding its latent anti-Semitism as it is with all its other prejudices.

There are two ways to read the White House’s bumbling in this area. The less mordant reading is that all the stumbles in the face of increased threats against Jews — the muted response to the Jewish community center bomb threats, the weird statement put out on International Holocaust Remembrance Day last month that was so devoid of references to Jews that it turned into a three-day media feeding frenzy — are more signs of an incompetence and self-absorption that is the defining hallmark of Donald Trump and the third-rate intellects he surrounds himself with. So long as the Trump family manages to profit off its patriarch’s presidency, it will be difficult for other issues to pierce their bubble.

After all, there are few easier layups for an American president in the 21st century than denouncing bigotry. Yet Donald Trump is proving to be as adept at doing so as he is at anything else. Which is to say, he is dangerously incompetent. America’s bigots, seeing this incompetence as winking support, are thus feeling emboldened.

The other, more sinister reading is that Trump has surrounded himself with a coterie of racists and anti-Semites who are well aware of the characteristics and endpoint of their brand of ethno-nationalism. (One struggles to assume Trump is aware where all this racism could lead — or is already leading, with the recent deportations of numerous immigrants in raids that some have described as “ethnic cleansing.”) That strikes me as more likely and way more frightening.