With "Crashing," Pete Holmes makes a good comedy about a decent man who's a bad comic

Pete Holmes gives viewers a show about comedians that isn't hilarious, but is perfectly honest — and it works 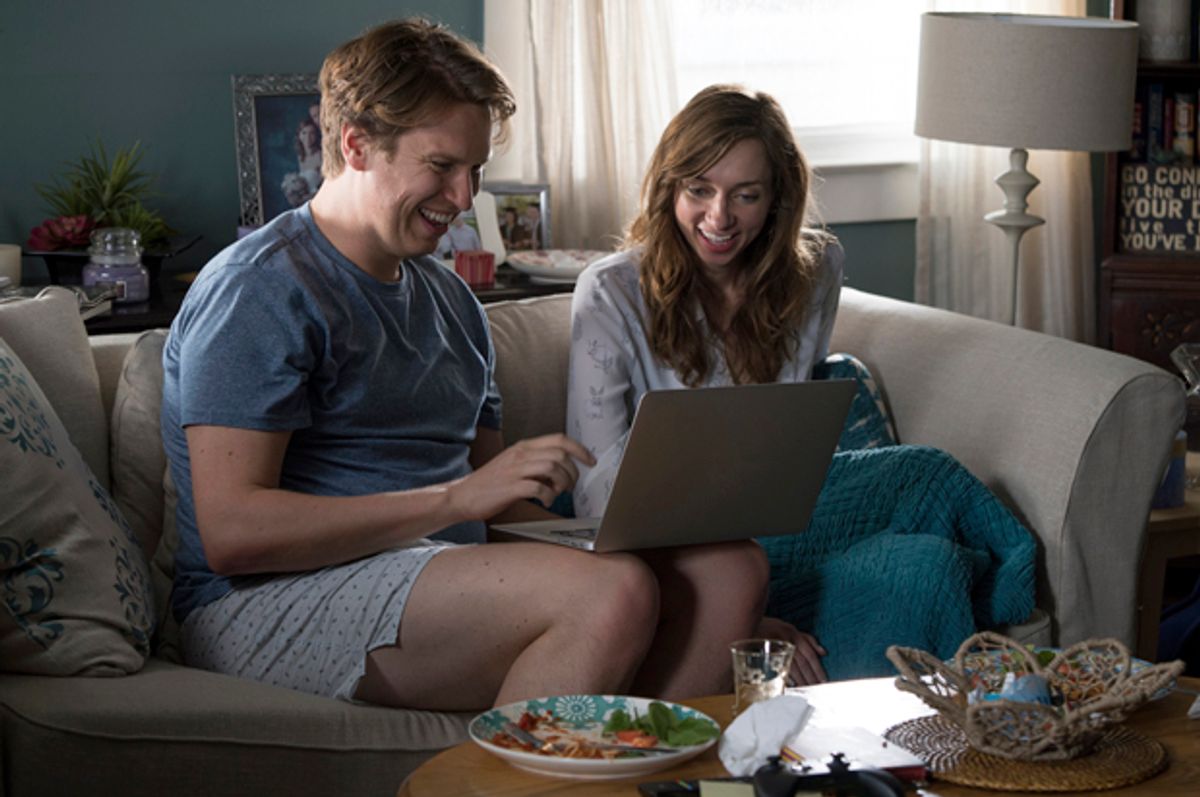 Working toward making it as a professional comedian isn’t all that fun. This is one of many takeaways from “Crashing,” the new HBO series executive produced by Judd Apatow and starring Pete Holmes as a fictional version of himself. Another hard truth Pete learns is that making it from zero to headliner requires a bottomless tolerance for being exploited, a willingness to fail in public as many times as it takes to get better, and the ability to find humor in any situation.

Pete has all of those components nailed except for that last one, which is the crux of the show’s humor. In reality Holmes is a success and a man of many talents. He had a talk show on TBS for a time, lent his voice to the E*Trade baby when that was a thing and has gotten a few of his cartoons into the New Yorker, a feat many professional artists have yet to accomplish. He’s also a goofy, grinning and very tall man who made a name for himself by mining the sensitive, vulnerable parts of his own life to create accessible sets. He does curse, but refrains from getting too blue; he would rather be kind and likable than edgy.

Holmes also hosts the “You Made It Weird” podcast, where he coaxes fellow comedians to bare their souls in the manner that he does. Each episode is a confessional experience where conversations coast through sex, addiction, death, religion and an extensive variety of neuroses.

That side of Holmes shows up in “Crashing,” debuting Sunday at 10:30 p.m., more than the happy go-lucky giant stand-up fans may be accustomed to seeing in specials and onstage. That battered cliché that dying is easy and comedy is hard? “Crashing” blends both ends of that line into a half-hour show that’s often more tragic, absurd and uncomfortable than funny.

Only a few instances in each of the six episodes made available to critics rightfully earn the designation of being hilarious.

That doesn’t mean the show is a failure; not at all. Indeed, some of the show’s legitimately side-splitting moments earn their laughs by being tragic, absurd and uncomfortable at the same time. Pete is a man who will bleed for his jokes -- quite literally, as is shown in a pathetic, farcical mugging -- but who seems to gain very little for his loyalty.

“Crashing” provides a mixed take on starting over, a concept that Holmes and Apatow flesh out with a balance of honesty sugared with fantasy. You could call Pete a man who’s beginning again if not for the fact that he never launched in the first place. Pete followed the rules laid out for him by his family and religion; he’s a devout Christian who married his college sweetheart and remained a virgin until his wedding night.

These are details we find out later, but it explains what we see of Pete when we first meet him and his wife Jessica (Lauren Lapkus) in their modest suburban starter home and immediately witness how stilted and awkward their sex life is. But if Pete is an unskilled lover, he’s an even worse comedian, although he dedicates his life to attending open mics in New York. Nevertheless, he loves his wife as much as he loves stand-up, giving his heart to both in equal measure.

Only one of those relationships has a future, as it turns out; Peter catches Jessica cheating on him with one of her colleagues (George Basil, at his hippie-crunchiest) and decides to throw himself fully into his stand-up career. But he has no money, talent, or place to stay, and somehow stumbles into a series of adventures with famous people who put him on the path to. . . something, presumably.

“Crashing” is based on the 37-year-old Holmes’ real life: He was married at 22 and divorced at 28, and like his character he was raised in a religious family. Apatow’s stamp is apparent throughout the series, however; Holmes serves as a writer on each episode, and Apatow directed the first and co-wrote the third with him.

Both Holmes and Apatow are veteran stand-up performers who made the transition over to Hollywood, and their reverence for the art of entertainment dominates this show. “Crashing” shows that there is no magic to a successful set, only the ability to learn and grow from trial and humiliation.

We see this when Pete is called to go onstage on the very day he discovers the love of his life in flagrante delicto with another man, urged on by the example of Tig Notaro, who pulled of a legendary set on the same day she was diagnosed with cancer. Left out of that motivational speech was the detail that Notaro had been honing her craft for years and had earned a loyal following. When Pete gets the mic and attempts to make light of being cuckolded, he flames out.

“This is painful,” an audience member yells at him. “Can’t you feel it?”

Pete is a stand-in for every underdog comedian who refuses to have his dream squelched by hecklers or uncaring nightclub managers. And just like those hundreds of comics paying their two-drink minimum or standing on corners hawking fliers all for a chance to pour a few minutes’ worth of their spirit into a dark room, Pete has fantasies of running with big dogs of that world.

The difference is, he actually gets to do that. Holmes’ Pete is homeless, but somehow manages to charm his way onto the couches and bean bags of some of comedy’s heaviest hitters, starting with Artie Lange, T.J. Miller and Sara Silverman. Part of the reason they give Pete shelter is because he is a feckless, jovial oaf who got dealt a bad hand; Lange and Miller obviously see their past miseries and lost innocence in Pete. Silverman, meanwhile, is this show’s version of a crazy cat lady, only the furry strays she takes in are unshaven gagsters like Pete.

It’s no coincidence, though, that “Crashing” is a show that treats comedy as a divine calling. Because of his background, Holmes remains fascinated with religion. In “Crashing,” Pete slowly loses his fealty to conservative Christian concepts of how life should be lived and what one can and must not do to be “good,” and instead gives his soul over to the work of being funny.

Fortunately he doesn’t have to say it – Miller, one of Holmes’ friends in real life, gets to make that case on the show. In “Crashing” the comedian styles himself as a philosopher drunk, seeing material in everything, and especially in Pete’s pain. “Comedy’s kind of the new religion,” he spouts at one point. “When you’re traveling, you’re preaching to people this ideology of seeing everything with a smile. People need it.” He goes on to liken comedians to holy men, “except we’re better than priests because we’re not lying.”

In order for “Crashing” to completely work the viewer has to be a convert to that religion in all of its fullness, and overlook some of the flaws of the characters who would be saints. Start with Apatow, who has been a target of criticism for his female characters. Viewing Lapkus’ Jessica through the Apatow detractor’s prism reduces her character to one of his shrews — totally hot, but also a buzzkill — and one could correctly point out that Silverman is here because she’s the quintessential guy’s girl; that is, she can sling dick jokes with the best of them. Those points aren’t wrong.

“Crashing” shakes off some of that by Holmes making it obvious that Pete wasn’t holding up his end of the romantic partnership. Even when he throws himself into going pro, Pete's really more dedicated to the idea of comedy than putting in the work of studying the form and finding material. Most of his success is earned by his good nature, and most of his payments are in the form of kindnesses from celebrity strangers who for whatever reason decide to become his friends.

The comics in “Crashing”are fond of speaking to the alleged nobility of their profession, but it’s also aware of how silly that vision is in the larger scheme of things. When Miller attempts to shame Jessica for refusing to support Pete’s dreams, declaring that comedians are the new philosophers, she shoots back, “Did Socrates ever talk about his nut sweat? Did Plato ever talk about jerking off into a trash can?”

“Crashing” shows comics as the earthbound beings they are — even the household names. This series shows them as people who haven’t forgotten that they used to be sad sacks who bombed more often than they brought the house down. Pete has yet to figure out that the art of winning an audience is perfected through enthusiastically failing again and again. “Crashing” shows that Holmes has already mastered that lesson and has moved on to quietly, honestly killing it.