"I grew up with a wall": Watch a German immigrant's emotional testimony during Fox News town hall 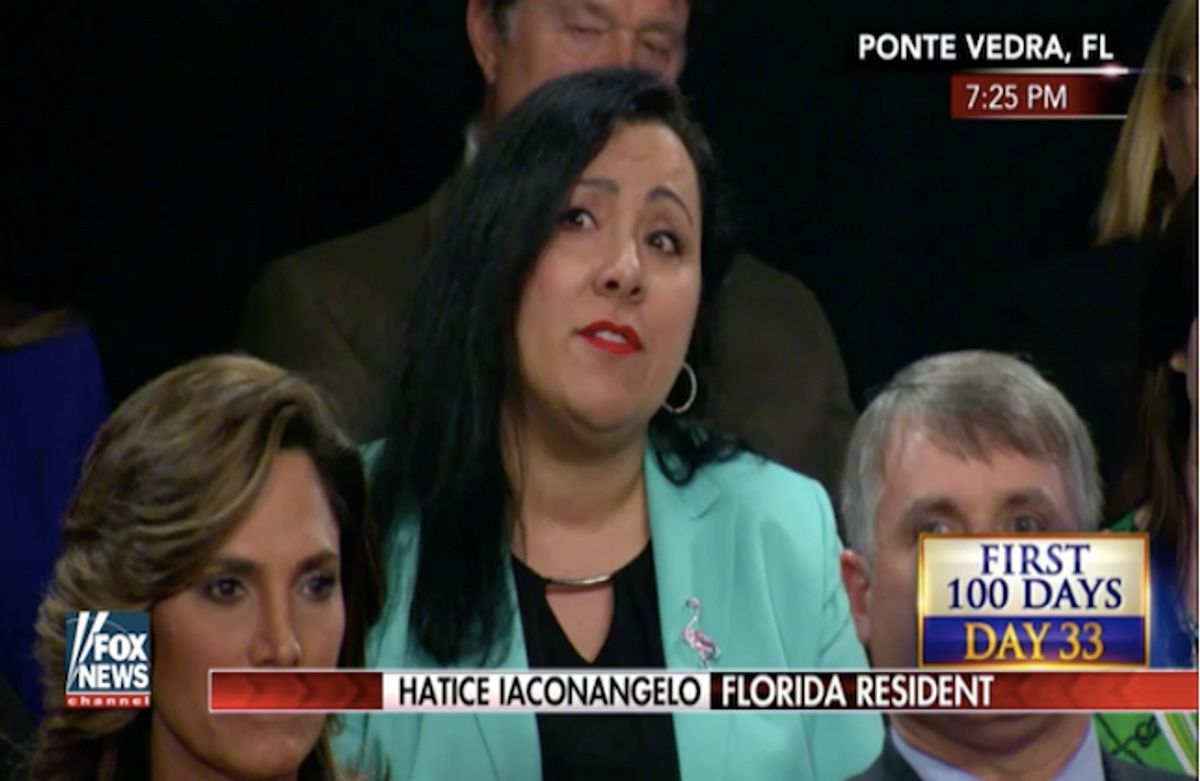 Fox News decided to join its cable news competitors with its own town hall-style special on immigration Tuesday night. If the crowd's reaction to one immigrant's moving testimony is any indication, even the most aggressive of President Donald Trump's immigration orders will be wildly applauded by his base.

Hosted in the perennial battleground state of Florida, the Fox News crowd was decidedly more conservative than a more accurately representative sample would have presented. An overwhelming majority of attendees raised their hands in affirmation when host Martha MacCallum asked the crowd if they felt enthusiastic about Trump's job performance; the question was posed the same day the White house released the outline of Trump's new immigration executive order.

But despite the lopsided partisan split, the crowd's reaction to one immigrant's experience in divided Germany was remarkable to even the most seasoned Fox News observer.

"I'm a native Berliner," Hatice Iaconangelo told the town hall, "I grew up with a wall."

Iaconangelo told MacCallum that she was "horrified" to hear the comments from her fellow Floridians in support of Trump's plans for a border wall along the U.S. - Mexico border.

"I know what the wall does to families," she told the crowd. "I witnessed people getting shot crossing over the wall."

The emotion in her voice growing, Iaconangelo added, "I see us as a nation going toward that again. It's horrifying."

Although she escaped East Germany and immigrated to the U.S. more than 26 years ago, Iaconangelo said "this is not the country I emigrated to." Instead, she sees the U.S. following the path of her homeland.

"Little by little we are getting there," she told the Fox News town hall participants. "Berlin didn't start out with a wall and the Russians shooting everybody. It starts gradually and gets worse and worse."

Iaconangelo suggested that those who support Trump's plan to indefinitely ban refugees fleeing the Syrian war should "get to know a refugee. Get to know an immigrant and see what they have gone through in life."

"I want us to come together as a nation and have compassion for people," she said, before MacCallum turned to the local Republican Party chairman for a response.

"I was in Berlin when the wall was up," Korach began. "The wall was meant to keep people in because the Communist system was so horrible," he explained to Iaconangelo.

"This wall is being designed to protect our border....If we don't have the rule of law, we don't have sovereignty," he said to wild applause. When Iaconangelo countered that law enforcement already does a "great job" protecting the nation, the Fox News crowd remained silent.

Watch the exchange below, via Fox News: