"Milo bills" crop up across the country: Republicans rush to court right-wing troll by protecting offensive speech on campus 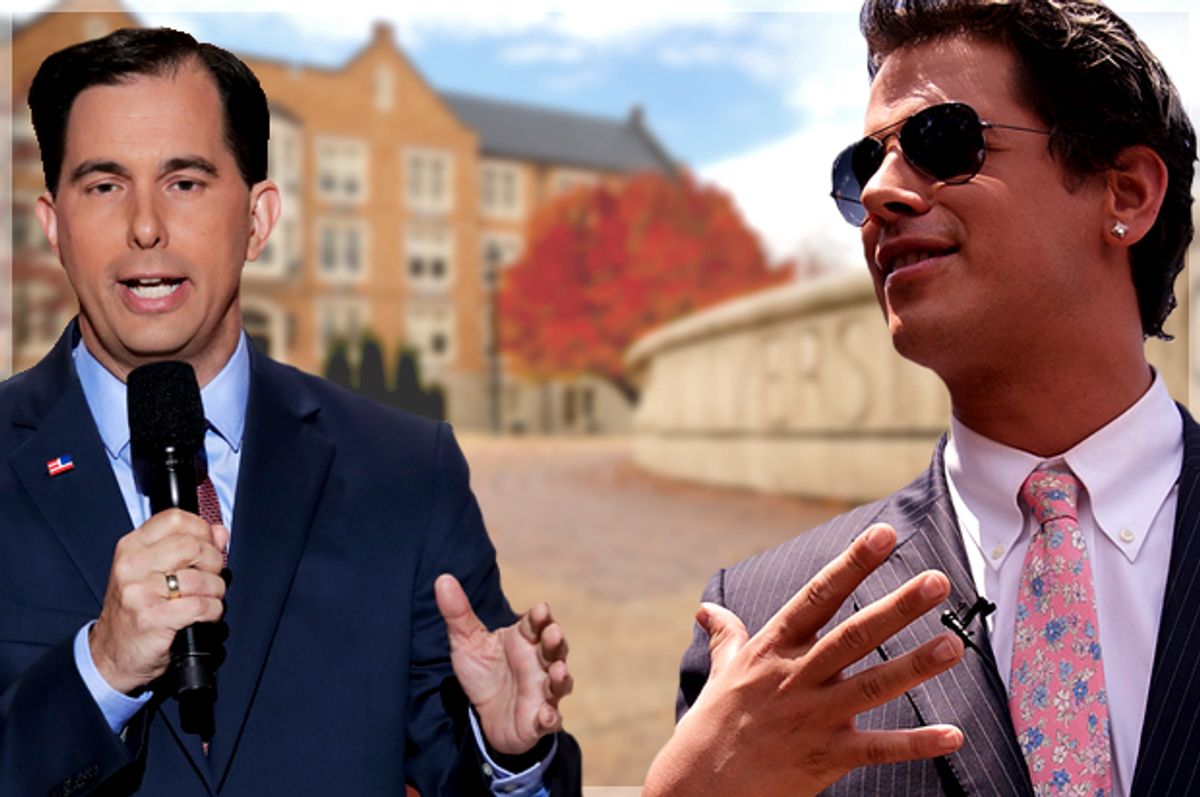 Just as the ultimate right-wing troll Milo Yiannopoulos begins to fall out of favor with most conservatives (he was even booted from Breitbart), Republicans across the country have taken up his crusade against so-called political correctness on college campuses.

"Milo bills" have cropped up in several states, purporting to protect free speech on college campuses in the wake of violent protests against the right-wing agitator.

Before he was disinvited to the premiere conservative gathering CPAC in the country and forced to resign as an editor at the nation's leading right-wing online outlet, Yiannopoulos -- an agitator who rose to fame with a particular group of like-minded men on the internet by targeting transgender students and women of color for harassment -- was recently elevated to the top of the so-called alt-right movement. When a recent protest against his planned speech at the University of California, Berkeley, turned violent, led President Donald Trump even threatened to withhold federal funding for the Golden State.

Yiannopoulos has since lost his lucrative book deal with Simon & Schuster and his keynote address spot at this weekend's CPAC due to a video of the controversial commentator condoning sex between grown men and underage boys. Yet support for Yiannopoulos and his cause hasn't waned for Republican lawmakers in at least two states, who have turned their focus to college campuses in an effort to further Yiannopoulos' goals.

In an apparent nod to the controversy over Yiannopoulos, Daniel's bill requires that public universities “be open to any speaker whom students, student groups, or members of the faculty have invited.” Daniel said it was "designed to implement oversight of administrators' handling of free speech issues."

Republican Sen. Joey Hensley, who co-sponsored the bill, suggested that the legislation was particularly necessary to protect students with conservative views.

“Too many times we’ve seen classrooms where the professor doesn’t want to hear both sides of an issue,” Hensley said. “We’ve heard stories from many students who are honestly on the conservative side, who have those issues stifled in the classroom.”

The bill would require that the proposed speech policy be communicated to students at least once each semester. The bill said public universities "have abdicated their responsibility to uphold free speech principles, and these failures make it appropriate for all state institutions of higher education to restate and confirm their commitment in this regard."

Since video of the controversial commentator condoning sex between grown men and underage boys has resurfaced, however, Daniel has backed away from his endorsement of Yiannopoulos, sending out a tweet Monday saying his bill would be known as "the Thomas Jefferson, Patrick Henry, Thomas Paine, & the MLK JR. bill."

"It seemed appropriate at that time to name it after someone who has been persecuted for freedom of speech," the Republican lawmaker explained of his bill to The Tennessean this week.

In Wisconsin, Republican Gov. Scott Walker has apparently lapped up Yiannopoulos criticism of liberal college students being fragile snowflakes -- yet somehow seemed to miss the conservative mockery of so-called safe spaces. In his 2017-18 state budget, Walker introduced his own "Milo Bill," which is meant to force University of Wisconsin schools to meet a quota of conservative speakers. As the Capital Times noted, Yiannopolos targeted a transgender student by name from the stage in a December talk at the University of Wisconsin-Milwaukee.

Members of public colleges “may not obstruct or otherwise interfere with the freedom of others to express views they reject or even loathe,” Walker's latest budget states.

A spokesman for the UW-Madison student government feared that the language might be interpreted to force public institutions to “censor students” and violate their freedom of assembly.

And while one Republican lawmaker in Iowa recently proposed legislation requiring a quota of conservative professors on campus, Walker's budget would allow conservative students to opt-out of funding services and clubs they don't like.