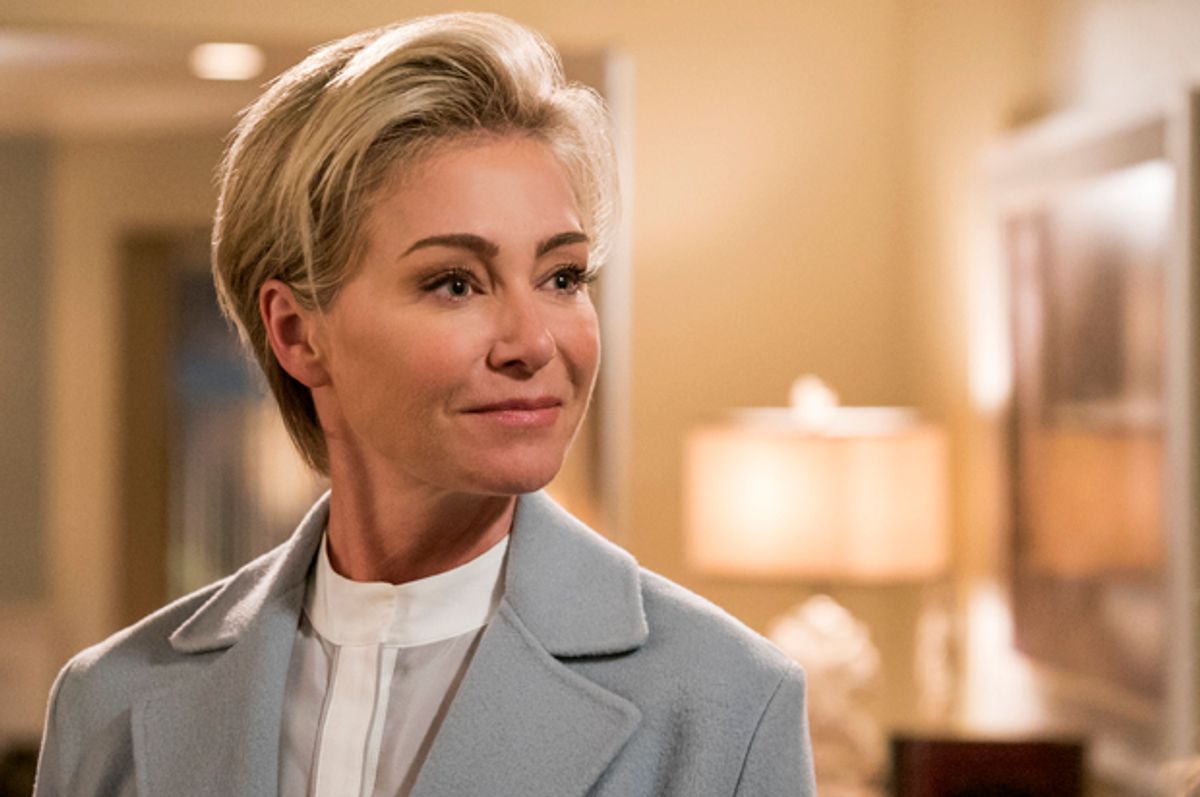 Barrymore plays Sheila, a buttoned-up suburban mom who develops a craving for human flesh after throwing up a mysterious ball, along with buckets of vomit. Her panicked husband (a pitch-perfect Timothy Olyphant) attempts to aid his undead spouse in a quest to satiate her hunger. They decide to target bad people — drug dealers, pedophiles and other lowlifes — but their schemes never go according to plan. Sheila’s first victim is a fellow real estate broker (Nathan Fillion) who makes eyes at her during a night of drunken clubbing and refuses to take no for an answer. He messed with the wrong corpse.

Barrymore is always a welcome presence, but the performance she gives requires audiences spend a few episodes to warm up to her. Like the show around her, she grows on you. It helps that the former romcom star is aided by a stellar supporting cast, which includes Patton Oswalt (“Young Adult”), Thomas Lennon (“Reno 911”) and Mary Elizabeth Ellis (“It’s Always Sunny in Philadelphia”).

But for the show’s rotating troupe members, “Santa Clarita Diet” saves its most inspired bit of casting for last. Even if you aren’t a fan of the show (which has received somewhat mixed reviews), it’s worth sticking around until the season finale, when Portia de Rossi casually strolls in and blows the roof off the joint. The former “Arrested Development” star is a perverse delight as Cora Wolf, a scientist who may or may not have a cure for Sheila’s condition. Wolf, who spends most of her time with the undead, doesn’t know how to interact with the living. She attempts to hug Sheila three different times (to see which version feels “more natural”) before just giving up entirely.

The zombie researcher is just the kind of character that de Rossi excels at portraying; it's described by series creator Victor Fresco as “steely, smart as hell, and completely disconnected emotionally.” The two previously worked together on “Better Off Ted,” a gonzo corporate satire that lasted just two seasons on ABC. De Rossi played Veronica, a soulless executive who keeps her flawless hair pulled back to accentuate her power. She’s the kind of boss,  ruthlessly dedicated to the bottom line, who refers to her underlings as “minions.”

Fresco, who also worked on “Dinosaurs” and “Alf,” told Entertainment Weekly that the part of Cora was written with de Rossi in mind because he felt like he wasn’t “finished with that character.” Allowing the actress to all but reprise the part of Veronica is a love letter to fans of the criminally underrated comedy, which was saddled with a terrible title before it was unceremoniously axed by its parent network. (For the uninitiated, outtakes of “Better Off Ted” cast members riffing extremely NSFW insults — “Frosty the Snow Whore” remains a personal favorite — is one of the funniest things one will ever see.)

This show also a reminder of the peerless deadpan performer de Rossi is when given the right material, which isn’t nearly often enough. Should “Santa Clarita Diet” be picked up for a second season, it would be the actress’ first major comedic role since “Ted” went off the air seven years ago.

In fact, de Rossi is the only “Arrested Development” alum who wasn’t able to parlay being in the cult phenomenon into steady success. Of the main cast, she’s arguably had the most difficult run after the Fox comedy was canceled. Jeffrey Tambor and Tony Hale have since won two Emmys each. Michael Cera and Jason Bateman both launched successful film careers, balancing mainstream and indie projects. Cera is now starring in “The LEGO Batman Movie,” with the absurdly prolific Will Arnett, who has starred in eight different TV shows in the past seven years. Alia Shawkat is the current lead in the acclaimed TBS comedy “Search Party,” and Jessica Walter has nine seasons of “Archer” under her belt.

Anyone who has watched de Rossi slay the competition at “Linda Bagel” or shoot a pillow to relieve stress knows what separates her from her onetime co-stars isn’t lack of comedic talent. She’s utterly brilliant. So what gives?

Well, it’s a little bit of bad luck along with a heaping helping of institutional bias. “Better Off Ted,” while critically adored, never attracted enough eyes to gain the kind of following that would lead to bigger things for the native Australian. After “Ted” was yanked, de Rossi was cast as Lily Munster in NBC’s troubled reboot of “The Munsters.” The ill-fated show got burned off as the Bryan Fuller-produced miniseries “Mockingbird Lane.” Her fortunes didn’t improve from there. ABC passed on “The Smart One” in 2012, a comedy that would have teamed de Rossi with her wife, Ellen DeGeneres, who produced the half-hour pilot.

It doesn’t help that de Rossi — who now is playing a recurring character on “Scandal” — is in her 40s in an industry where Olivia Wilde is treated as a senior citizen. As women grow older, they are offered far fewer chances than their male peers are. Just two of Arnett’s shows, for instance, have lasted more than two seasons, and he’s continued to line up more projects.

But even more than that, de Rossi is one half of America’s most recognizable (and perennially popular) same-sex couple. That visibility has been groundbreaking in normalizing queer relationships. When DeGeneres first came out in a 1998 episode of “Ellen,” advertisers pulled sponsorship for the show, which was driven off the air by deafening controversy the following year. Just a decade later, the couple’s splashy and widely celebrated wedding, which landed on the cover of People magazine, signaled a major shift in LGBT acceptance.

Dietram Scheufele, a professor at the University of Wisconsin, once told NPR that the pair is “almost a litmus test of where we have been as a society.”

Becoming a petri dish for social tolerance hasn’t been generous to de Rossi’s career. Hollywood is notoriously unkind to out actors, so much so that Rupert Everett famously urged LGBT people who want to make it in the industry to stay in the closet. But things have improved considerably since Everett opened up about his sexuality two decades ago. Out actor Jim Parsons has won four Emmys for his work on “The Big Bang Theory,” while Jane Lynch took home a trophy for “Glee” in 2010.

Even as things change, the more they stay the same. Celebrities like Taylor Swift and Brad Pitt have the luxury of enjoying very public relationships, probably more so than any of us would like. But it’s worth noting how extremely little you probably know about LGBT actors’ private lives.

If a gun were pointed at your head and you had to say the name of Parsons’ significant other to avoid death, could you do so? What about for Zachary Quinto, Cynthia Nixon, Nathan Lane, Jodie Foster, Wentworth Miller, Alan Cumming, Lily Tomlin, Sean Hayes, Stephen Fry, Jesse Tyler Ferguson, Colton Haynes, Wanda Sykes or Sir Ian McKellen — all of whom are out and proud? I couldn’t come up with a single one. Of out celebrities, I could cite just two committed same-sex couples: Sarah Paulson has been dating Holland Taylor since last year, while Neil Patrick Harris and David Burtka have earned the title of Instagram’s most beautiful family.

Paulson, who broke the internet by announcing she was dating the 74-year-old “Two and a Half Men” actress, has been particularly vocal about her intergenerational relationship. The Emmy winner recently claimed that she was the “luckiest person in the world.”

When it comes to the question of whom, say, Sandra Bernhardt is shacking up with, you might reasonably wonder who would care about such a thing. If these folks aren’t sucking face in the tabloids every day, good for them. But given the public obsession with every detail of a famous person’s day, even what he or she wore while going to the corner grocery, not knowing even basic facts about LGBT stars’ romantic lives is a notable omission. After all, these minutiae are what billion dollar industries are made of.

There’s perhaps a reason than that queer love rarely graces the cover of Us Weekly (as was the case with “Sandra and Jodie: So in Love!”). When Matt Bomer was up for the lead role in “Fifty Shades of Grey,” fans complained they wouldn’t be able to see the “White Collar” actor as anything but a gay man. They couldn’t suspend their disbelief to watch him play Christian Grey. Although more celebs are coming out than ever before, actors might be less willing to make that extra leap by putting their relationships in the public eye as well, concerned that audiences will associate them as part of a same-sex unit. It could limit the kind of roles they are offered.

For as reticent as Stewart has been to put a label on it, the star has been extremely forthright about whom she’s dating. Responding to rumors about her sexuality in 2016, the actress claimed that she was “really in love with [her] girlfriend.” Since splitting from longtime love Alicia Cargile last year, Stewart has been attached to indie singer St. Vincent (neé Annie Clark) and model Stella Maxwell. Instead of stepping back as her relationships have become more public, Stewart has continued to take a variety of high-profile roles in projects that recently included  “Café Society,” “Equals” and “Personal Shopper.” All those characters are straight.

To her credit, de Rossi may have paid the price for being so open about her marriage a decade too early, but that honesty has freed her to be bracingly frank about the pressures women face in the industry — whether queer or straight. Her 2010 autobiography, “Unbearable Lightness,” discusses her battle with anorexia, which she developed while working on “Ally McBeal.” De Rossi is not only a trailblazer, one whose example helped open doors for other LGBT actors in Hollywood. She’s an inspiration.

“Santa Clarita Diet” is a chance for viewers to rediscover a fearless comic actress and queer icon whose genius has been overlooked for far too long. If there’s any justice in the world, this show will be the start of the career renaissance de Rossi so desperately deserves.