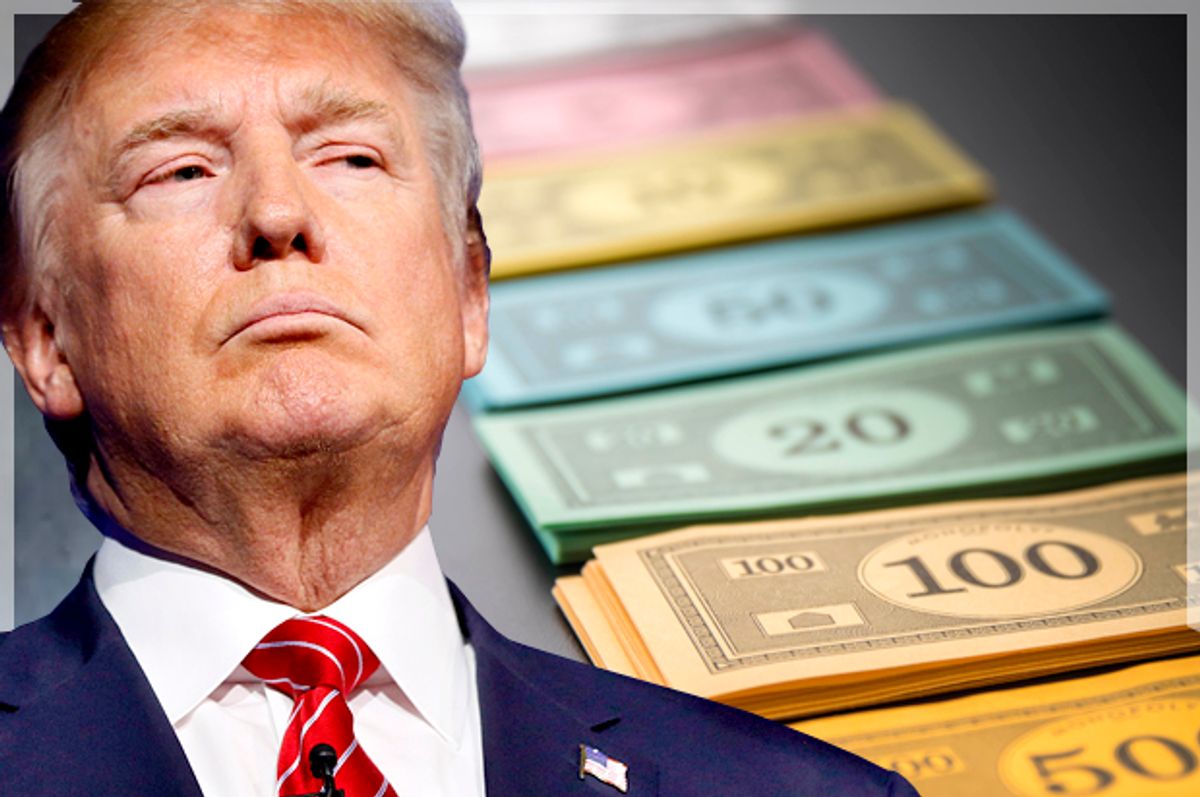 President Donald Trump has set what economists are calling an "aggressive" GDP growth target, relying on extra-rosy assumptions to get the math on his draconian cuts to work.

Trump has promised to cut taxes and increase spending while reducing the deficit. He's already made good on one major campaign promise to cut federal regulations, which he said would spur economic growth.

At his Senate confirmation hearing, Treasury secretary nominee Steve Mnuchin predicted that Trump’s planned economic reforms could deliver unprecedented growth of 3 to 4 percent per year. Yet the U.S. economy hasn’t consistently delivered growth higher than 3 percent annually in years and inflation-adjusted economic growth over the past decade has been just under 2 percent. The government recently reported that the U.S. economy grew by only 1.6 percent last year.

Still, as the Wall Street Journal first reported, the Trump transition team ordered staffers at the Council of Economic Advisers to predict sustained economic growth of 3 to 3.5 percent. In previous administrations, the executive branch would predict growth using a baseline forecast prepared by the CEA; Trump recently demoted the CEA chair from his Cabinet.

"What’s unusual about the administration’s forecasts isn’t just their relative optimism but also the process by which they were derived," the Journal wrote.  "Discussions for the Trump administration unfolded differently, with transition officials telling the CEA staff the growth targets that their budget would produce and asking them to backfill other estimates off those figures."

“The president ran a campaign on proposals that would be incredibly pro-growth,” a White House spokesperson told the Journal. “There is a process in place where the administration develops an economic forecast based on its policies that are included in the president’s budget. That budget is still being finalized.”

But economic analysts have said that Trump’s growth rate target of 4 percent is audacious at best and implausible at worst, especially given broader factors like an aging population. The Congressional Budget Office and Federal Reserve project annual economic growth to hover around 1.9 and 1.8 percent, respectively, for most of the coming decade.

Four percent growth would require big gains in the size of the work force and productivity, but with baby boomers retiring and no boom in productivity, "you just can't do it, mathematically," former Labor Secretary Robert Reich told CNBC on Tuesday.

It's just "not in the cards," Reich explained.

Sebastian Mallaby, who serves on the Council of Foreign Relations, told CNBC on Tuesday that "the economy is already operating at near potential."

Economic growth is ultimately driven by two factors: population growth and technological innovation --  and there’s only so much the government can do to affect either factor. Dale Jorgenson, a Harvard economics professor whose most recent forecasts show an economy growing by 1.8 percent annually over the next decade, explained to the Journal that workforce skills aren’t advancing. At the same time, few meaningful technological innovations have spurred job growth -- with many advances leaving whole industries obsolete.

"This idea that you can boost [GDP growth] into a nirvana stratosphere … it's not gonna happen," Mallaby said. "If we think it's gonna happen, we'll make policy errors."

According to the New York Times, Trump plans to couple his unrealistic growth plans with drastic cuts to several beloved federal programs. In his initial draft budget, Trump will reportedly call for the elimination the Corporation for Public Broadcasting, the Legal Services Corporation, AmeriCorps, and the National Endowments for the Arts and the Humanities. Since those programs account for a mere $2.5 billion out of the annual budget of $4 trillion, Trump's budget will reportedly also eliminate the Appalachian Regional Commission, which promotes economic development in the poorest parts of America, along with the Office of National Drug Control Policy, which dispenses grants to rehabilitation and drug-abuse-prevention programs.