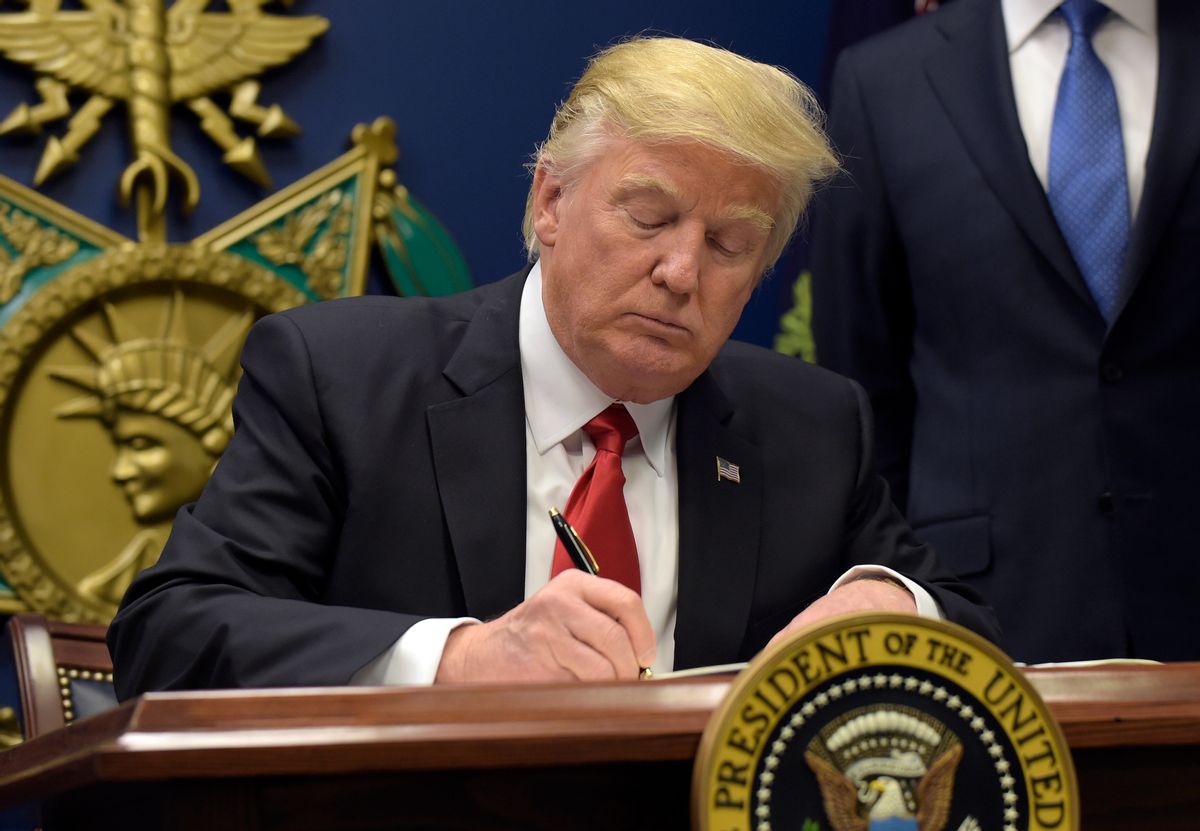 "As President Trump has clearly stated, he believes policy regarding transgender bathrooms should be decided at the state level. The joint decision made today by the Department of Justice and the Department of Education returning power to the states paves the way for an open and inclusive process to take place at the local level with input from parents, students, teachers and administrators." — White House press office

"Congress, state legislatures and local governments are in a position to adopt appropriate policies or laws addressing this issue. The Department of Justice remains committed to the proper interpretation and enforcement of Title IX and to its protections for all students, including LGBTQ students, from discrimination, bullying and harassment." — Attorney General Jeff Sessions

"This is an issue best solved at the state and local level. Schools, communities and families can find — and in many cases have found — solutions that protect all students. I have dedicated my career to advocating for and fighting on behalf of students, and as secretary of education, I consider protecting all students, including LGBTQ students, not only a key priority for the department, but for every school in America. We owe all students a commitment to ensure they have access to a learning environment that is free of discrimination, bullying and harassment." — Education Secretary Betsy DeVos

"The action taken today by the Trump administration is encouraging and my office is evaluating what impact it might bear on our ongoing litigation. Our fight over the bathroom directive has always been about former President Obama's attempt to bypass Congress and rewrite the laws to fit his political agenda for radical social change. The Obama administration's directive on bathrooms unlawfully invaded areas that are left to state discretion under the 10th Amendment. School policy should center on the safety, privacy and dignity of its students, not the whims of federal bureaucrats." — Texas Attorney General Ken Paxton

"This move shows that President Trump cannot be trusted to defend the rights of LGBT Americans. This is not a state issue. This is an issue of equality for all. The administration's wanton disregard of protecting the civil rights of the LGBT community is harmful to our communities and our schools." — House Minority Leader Nancy Pelosi

"Revoking the guidance shows that the president's promise to protect LGBT rights was just empty rhetoric. But the bottom line is that this does not undo legal protections for trans students, and school districts can and must continue to protect them and all students from discrimination. School districts that recognize that should continue doing the right thing; for the rest, we'll see them in court." — James Esseks, LGBT project director for the American Civil Liberties Union

"No longer will federal officials distort federal law that is meant to equalize educational opportunities for women, and no longer will they force local officials to intermingle boys and girls within private areas like locker rooms, showers, hotel rooms on school trips, and restrooms" — Gary McCaleb, senior counsel, Alliance Defending Freedom

"We all know that Donald Trump is a bully, but his attack on transgender children today is a new low. The U.S. Department of Education's decision to withdraw guidance clarifying the rights of transgender students endangers the well-being and safety of children across the country." — Rachel B. Tiven, chief executive officer, Lambda Legal

"We stand with transgender students and their families in strong resistance to bullying, even when it comes from the White House. All students, including transgender students, should have a fair opportunity to participate fully and succeed in school." — Rebecca Isaacs, executive director of Equality Federation

"Transgender students thrive when treated equally, but too often they are not. These young people already face incredible hurdles in their pursuit of education and acceptance. With a pen stroke, the Trump administration effectively sanctions the bullying, ostracizing and isolation of these children, putting their very lives in danger." —Mara Keisling, executive director, National Center for Transgender Equality

"They have sent a deeply troubling message to students that the administration will not stand up for students' civil rights. We condemn the administration's decision, vow to fight to enforce Title IX, which continues to protect transgender students, and call on individual schools and districts to treat students consistent with their gender identity and consistent with the rescinded guidance that accurately explained the law." — joint statement from The Leadership Conference on Civil and Human Rights, the National Center for Transgender Equality, GLSEN, the National Women's Law Center, the NAACP Legal Defense and Educational Fund, Inc., the American Civil Liberties Union, the Human Rights Campaign and MALDEF.