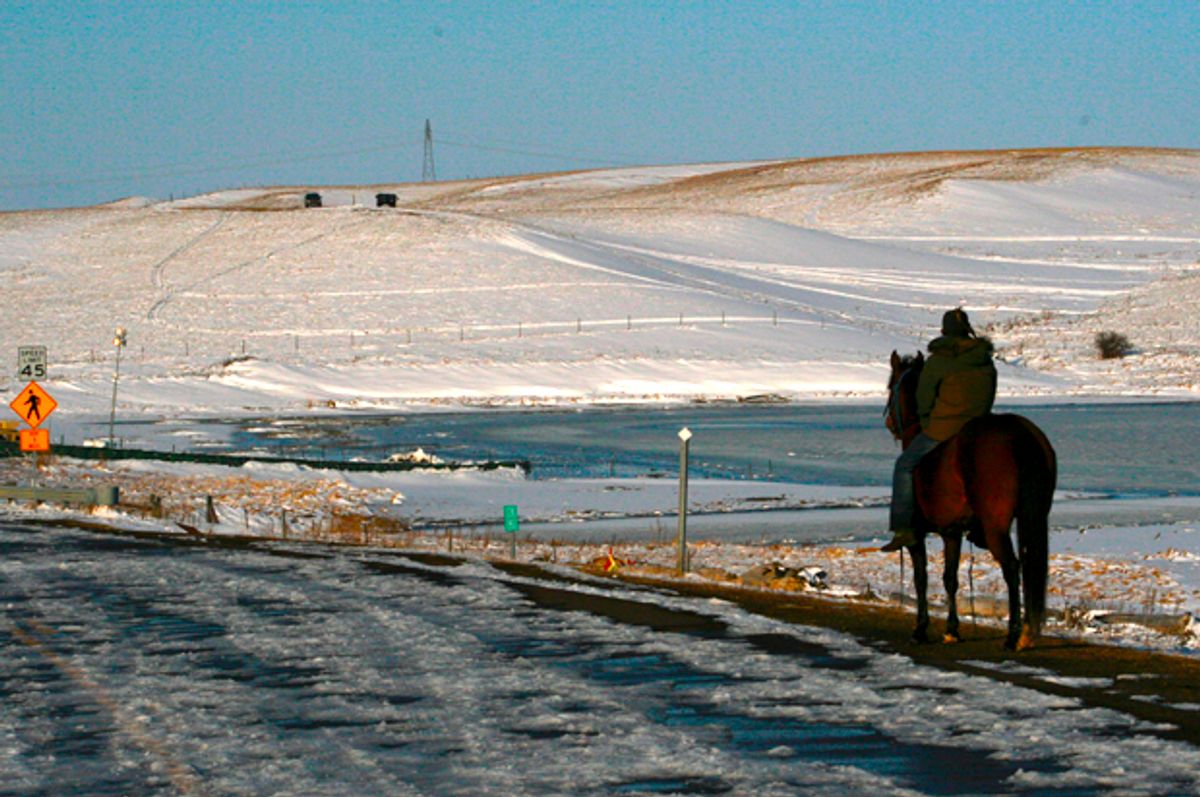 This Salon video was produced by Charlie May

Wednesday marked a last stand of sorts at Standing Rock, North Dakota, where about 200 to 300 "water protectors" have remained for months to protest completion of the Dakota Access pipeline, which would transport 470,000 barrels of oil a day across four states. The Army Corps of Engineers has ordered that the Oceti Sakowin camp near the Standing Rock Sioux reservation be closed at 2 p.m. local time on Wednesday, citing the potential for spring flooding.

Like the Indian warrior in the iconic Old West image "The End of the Trail" (a late 1800s sculpture by South Dakota artist James Earle Fraser) who slumps over his horse's back, weary after a long and difficult battle, those left at Standing Rock remained, prayed and burned the teepees that had housed so many over the past 10 months. They also burned wooden structures central to the camp's function, so that government engineers could not touch what they made and found sacred. The smoke that rose to the heavens was symbolic, as were the prayers: This was a ceremony of leaving.

The numbers at the camp have dwindled since last December, when the weather turned mean and the tribe awaited the Army Corps' next steps. Previously, thousands of concerned citizens — Native Americans and others — flocked to the site to support the Standing Rock Sioux tribe. The world has continued, however, to follow the tense, long-running standoff between the water protectors who stood against weather and human adversity to protect water resources for upward of 20 million people — and those in power who would build an oil pipeline in which President Donald Trump has had a financial investment.

James T. Meggesto, a member of the Onondaga Indian Nation, grew up in Syracuse, New York, with his grandmother nearby on the Onondaga reservation. He spoke to Salon:

Today is a sad reminder that at its core, this dispute has always been about environmental justice, and the lack thereof in Indian country, because once again Indian people are literally being forced to accept a dangerous oil pipeline directly upstream of their water supply that was rejected by a non-Indian community for precisely this reason.

Meggesto, who is a partner and deputy practice leader of the Native American law practice group at Holland & Knight, said he saw the amount of the tribe's land shrinking when he was a child. “There used to be more land,” his grandmother told him sadly.

"The legal battle will now sharply focus on the question of whether the [Army Corps of Engineers'] conclusion [in December] that an environmental impact statement was necessary . . . can be overridden by [President Donald Trump’s] campaign promise [and] implemented by an executive order,” Meggesto wrote.

And so it goes once again for Native American people, with government interests superseding treaty rights in order to grow environmentally dangerous businesses. While advocates of Energy Transfer Partners' Dakota Access pipeline said it will be safe because it will use the latest technology and the most modern pipes, people who live in different parts of the U.S. and suffer oil leaks into their water supply think otherwise.

As recently as Dec. 5, a significant oil spill occurred 150 miles from Cannon Ball, North Dakota, where the Standing Rock camp sits. At the time, officials estimated that 4,200 barrels of crude oil had leaked from the Belle Fourche Pipeline in Billings County. More than 130,000 of those gallons had flowed into Ash Coulee Creek, while yet more leaked onto a hillside, Bill Suess, spill investigation program manager at the North Dakota Department of Health, told CNN.

"Any time it gets into water, we respond differently and we take it more seriously," Suess told CNN at the time. Investigators did not know the cause, and it is this very sort of ambiguity that concerns anti-pipeline activists.

In early December, the U.S. Army Corps of Engineers announced it would look for an alternate route for the nearly complete pipeline, but has since changed course — and not in a good way — due to support for the Dakota Access pipeline from the current administration. Energy Transfer Partners and Sunoco Logistics Partners, owners of the pipeline, maintained that they would not reroute it in December and took legal action by asking a federal court to allow them to complete the pipeline.

Native American activists, who range in age from young people to grandmothers and everything in between, said their goodbyes before 2 p.m. deadline, which had been looming for some time. Many cried and hugged others who had been strangers just a few months before, but are now considered family. Social media is awash with advocates of the Standing Rock Sioux, who are tweeting details and resolve to keep fighting corporate interests.

Ruth Hopkins, a former judge for the Spirit Lake Nation and Crow Creek Sioux Tribe, has been among the most digitally vocal in the past year. As the group walked out of the camp, they sang traditional songs in several Native American tongues, and traveled the highway toward nearby Bismarck, where they were offered shelter in a transition center. On Wednesday evening, she tweeted:

This is so wrong. 💔 It tastes like greed, death, and betrayal.

As of this writing, she was still posting updates, one indicating an expected police raid to remove the few who still remain in spite of Army Corps orders.

Police are saying they're going to do the raid in the morning now. Who knows, maybe they'll try it under cover of darkness later. #NoDAPL

Soon after, she tweeted again.

Police retreated after vets formed a line to protect civilian unarmed water protectors & press.Wake up, this is happening in America #NoDAPL