The Mexican government slaps back at Trump's draconian immigration plan, calling it a "legal impossibility" 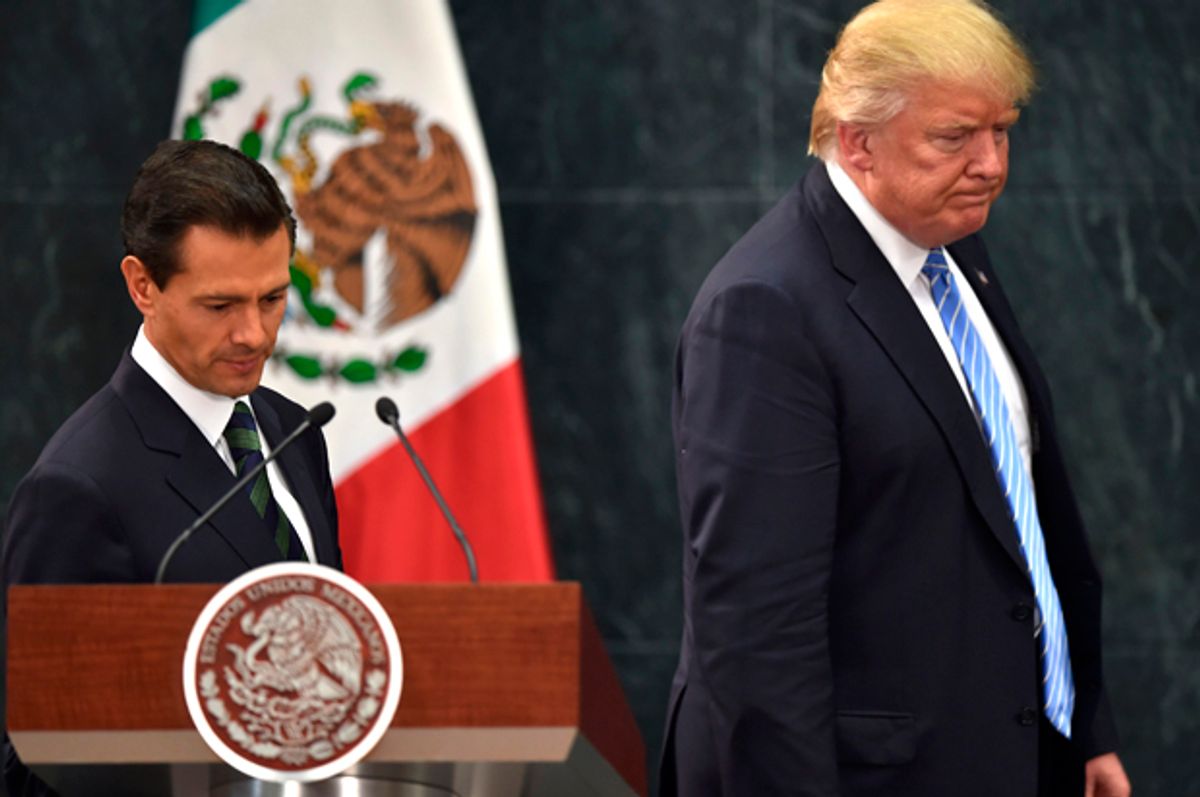 President Donald Trump is, once again, picking a fight with Mexico. Our southern neighbor has absorbed no small amount of abuse from the president, who has repeatedly accused the Mexican government of exporting criminals to the United States and promised to strong-arm the country into paying for a multibillion-dollar border wall. Now Trump has provoked Mexico once again by proposing to use the country as a sort of refugee way station for undocumented immigrants whom he plans to deport.

As I wrote earlier this week, Trump has cobbled together an especially aggressive plan for mass deportation of undocumented immigrants (even if the administration rejects the term "mass deportation"). The plan’s objective is to remove as many immigrants as possible in the shortest amount of time possible, while cutting corners on due process. One way the Trump administration wants to achieve this goal is to pre-emptively deport immigrants who are still waiting to have their cases heard by an immigration judge.

In a memo laying out how Trump’s plan will be implemented, the Department of Homeland Security states that it can “return aliens arriving on land from a foreign territory contiguous to the United States, to the territory from which they arrived, pending a formal removal proceeding.” What this means is that if a migrant from Honduras or El Salvador or elsewhere in mainland Latin America enters the United States by unlawfully crossing the southern border and is later apprehended by Immigration and Customs Enforcement, they can be sent to Mexico to await their formal deportation proceedings. Essentially, Trump wants to deport people while they wait to find out whether they’ll be deported.

While in Mexico, the Homeland Security memo states, those migrants will be provided “a functional, interoperable video teleconference system to ensure maximum capability to conduct video teleconference removal hearings.” The agency argues that this policy will be applied to immigrants who “do not pose a risk of a subsequent illegal entry or attempted illegal entry,” and that this will free up resources so that it can focus on higher-priority deportation cases.

The hitch in all this, of course, is Mexico, which does not want to serve as an ICE holding cell for non-Mexican nationals. After all the shabby treatment Mexico has absorbed from Trump and his administration, the Mexican government is clearly piqued at the White House for trying to dictate terms like this.

Mexico’s foreign minister, Luis Videgaray, met with Secretary of State Rex Tillerson today and publicly voiced the country’s “irritation” with the White House’s posture toward Mexico while calling the administration’s deportation proposal a “legal impossibility.” Videgaray has also said that “the Mexican government and the people of Mexico do not have to accept measures unilaterally imposed on a government by another government.”

Anonymous Mexican officials told CNN the country will not accept non-Mexican nationals deported from the U.S., and there’s nothing the U.S. can do to force the issue given that “there is no bilateral agreement between the U.S. and Mexico on having to take these immigrants.”

It is, generally speaking, incredibly stupid to repeatedly start diplomatic fights with a neighbor, ally and critical trading partner. Concerning the more narrow issue of immigration, however, treating Mexico like garbage is counterproductive to the Trump administration’s supposed goal of reducing undocumented immigration to the United States.

You might recall the child migrant crisis of 2014, when tens of thousands of unaccompanied minors came streaming over the U.S.-Mexico border in just a few short months. It spawned a nasty political fight as the GOP went full nativist and abandoned comprehensive immigration reform in favor of the maximum number of deportations. If you’re wondering why the child migrant crisis at our border abated and why it hasn’t repeated itself since, a big part of the answer is Mexico. At the request of the Obama administration, the Mexican government implemented a massive crackdown on Central American migrants passing through its country. The number of apprehensions and deportations of unaccompanied minors in Mexico spiked and the U.S. saw an attendant decline in the number of migrants detained at our border.

To be clear: I’m not endorsing that policy. Many of those kids were trying to escape drug-fueled gang violence in their home countries, and the U.S. and Mexico teamed up to send them right back into it, often without proper inquiries about  whether they qualified for asylum. But this example underscores the point that Mexico will be a critical player in whatever immigration policy the United States chooses to pursue. Donald Trump can’t keep on beating up Mexico politically and also expect the country to play a supporting role in his draconian immigration schemes.