Forget about "reaching out" to Trump voters, Democrats — that’s a pointless, self-destructive strategy

Is liberal outrage driving away the "deplorables"? Too bad. To win, we need righteous anger, not compromise 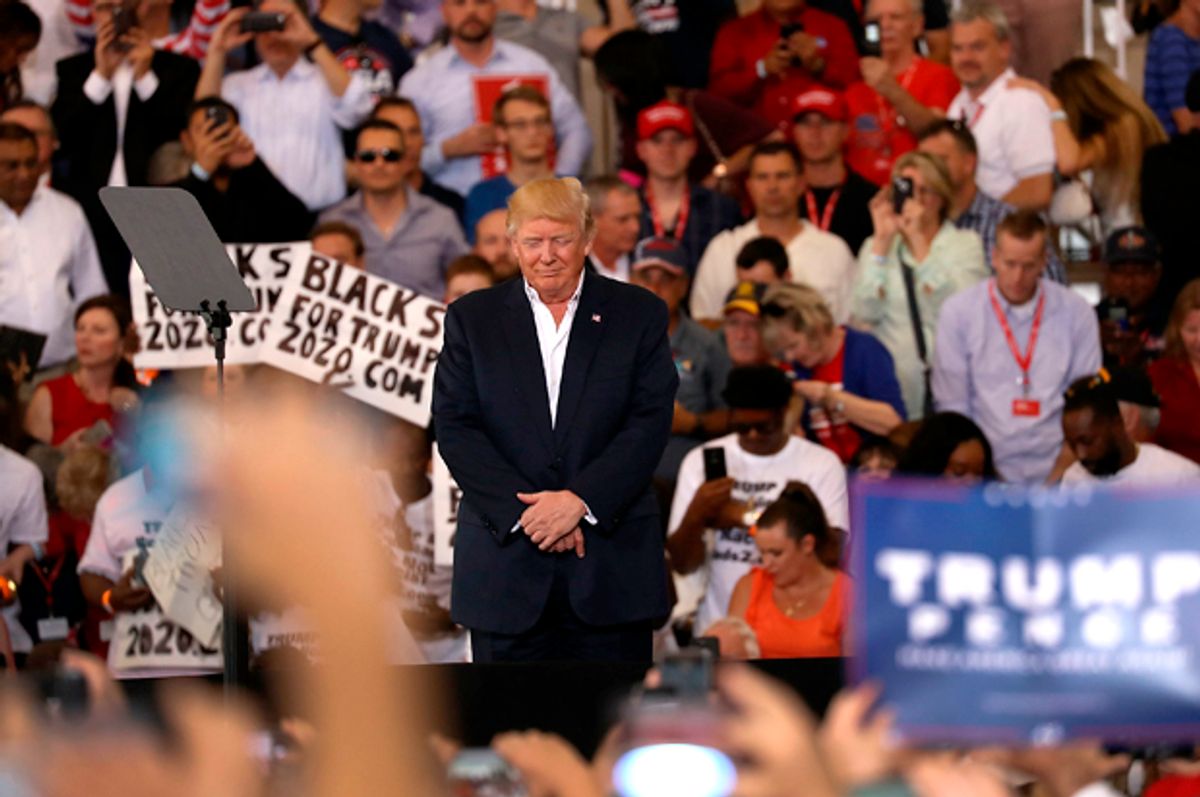 Donald Trump bows his head in prayer as his wife recites a prayer during a campaign rally on February 18, 2017 in Melbourne, Florida (Getty/Joe Raedle)
--

I am generally reluctant to wade into the interminable internecine Democratic Party battles. My focus at the moment is on trying to document the atrocities of President Donald Trump and there are only so many hours in the day. There are legions of armchair strategists out there willing to fight and argue over it, so I doubt my two cents are needed in any case. My feeling right now is the same as it always is — that we should elect more progressives to office wherever possible. Trying to game out the future with any precision at the moment seems like a fool's errand under this erratic, unstable, volatile administration .

Nonetheless I must admit that I find myself chafing at the constant drumbeat that I must be willing to "reach out" to Trump voters and summon up empathy for their plight. This New York Times article, which has been passed all over social media and commented upon by virtually every liberal pundit in the country, is just the latest in the genre. An intrepid reporter journeys deep into the heart of Trumpland and finds out that its denizens are just all-American folks who are fit to be tied that they're being tarred as bigots, and it's just not fair. The upshot of this particular article was that anti-Trump protesters were pushing these fundamentally decent people away with their resistance and that they really need to cool it if they expect to win over these voters at the polls.

I have no doubt that many Trump voters have good qualities and in their average daily interactions with people they are probably as polite and decent as can be. But their politics are, I'm sorry to say, deplorable. I cannot  find it in myself to go out of my way to try to feel much sympathy for people who don't think the following is out of bounds:

I'm going to go out on a limb and guess that unless feminists are ironing his shirt or making him some cookies, he's not all that interested in anything they have to say, so trying to "reach" him is going to be a waste of breath. The same goes for the people surrounding him who clearly thought that was just fine and passed this vulgar misogyny on to their kids:

I suspect that most Latinos, African-Americans and American Muslims also feel their "outreach" might not be welcome. Moreover, people whose lives are being directly affected by the horrific policies for which these Trump voters cheered and clapped during the campaign should really not be asked to do it. It's insulting and cruel, not to mention downright dangerous in some cases. If members of the Democratic coalition must show empathy toward these voters and try to persuade them that they have made the wrong choice, it probably should be done by members of the one group that doesn't seem to offend these folks: white males. Luckily, there are a lot of them out there who can take on this task.

But all of this raises the fundamental question of whether it's even necessary. Obviously, the Democrats have fallen short and need to do something to start winning majorities in the Congress and the presidency. There have been thousands of articles and posts written about whether they should try to boost the turnout of the party's base, appeal to nonvoters, approach moderate Republicans or attempt to convert Trump voters. Many in the press seem obsessed with the last activity and pay little attention to the other approaches.

A piece by Paul Waldman in The American Prospect made a persuasive argument as to why Democrats shouldn't bother with Trump voters, at least not yet. He described various types of Republicans such as the major Trump fans who wear those awful T-shirts, the party regulars who figured Trump would at least give them a conservative Supreme Court and cut their taxes and the "what the hell" voters who just took a flyer on disruption and change. He said if Democrats are going to reach out to Trump voters, those in the last group are the most likely to be amenable to outreach.

But Waldman explained that trying to appeal to any of those people is the last thing Democrats should do if they are seeking to create a wave election in 2018:

Right now, the Democrats' constituents are feeling horrified, terrified, and generally pissed off. Which is just what produces the kind of midterm election they need.

That's because midterm elections are all about enthusiasm — which almost always means anger. It's the reason the president's party usually loses seats in midterm elections: because the people who are angry enough to increase their turnout are the ones who dislike the president. Turnout in recent midterms has been in the 30s, meaning that nearly two-thirds of voters decide to stay home when there's no presidential race. So it's all a question of which voters get to the polls.

That's why right now, if Democrats want to win in 2018, they need to highlight the things that will get their own voters as worked up about Trump as possible: his scary appointees, his retrograde executive actions, his constant lies, his self-dealing and corruption, and the tremendous damage he and Republicans in Congress are preparing to do. In other words, Democrats need to be as partisan as possible, and forget about "reaching out."

He suggested that after the midterms will be the time to look to those "change" voters because by then Trump will have shown that he doesn't have the magical powers necessary to turn back the clock to before the 1960s, and a few of them might decide they want to try "change" again or will just stay home.

One of the most difficult aspects of dealing with someone like Trump is that he's so personally and politically erratic it's hard to know how to plan the opposition in advance. But it is safe to say he won't be able to deliver on most of his promises — and what he will deliver is unlikely to be popular with anyone other than his diehard fans.

In the meantime, the most important order of business is to do everything necessary to take back the Congress in 2018 and stop him from doing his worst. Trying to appease Trump voters is exactly the wrong strategy. It only threatens to throw cold water on all the building energy that will get Democrats, independents and anyone else who is appalled by this presidency out to the polls.