Communication in America: How undocumented immigrants negotiate a place for themselves

What happens when an undocumented immigrant meets a law enforcement officer? 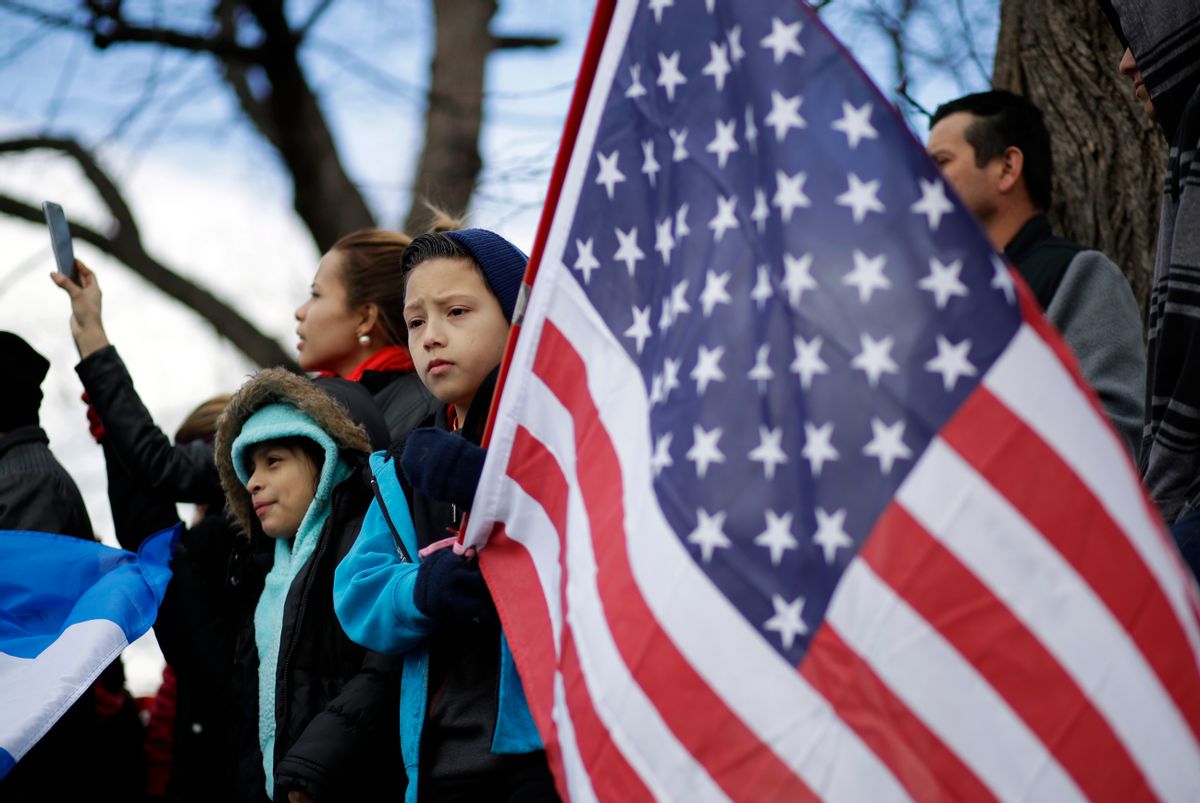 Demonstrators gather in Baltimore, Thursday, Feb. 16, 2017, as part of a nationwide protest called A Day Without Immigrants. Immigrants around the U.S. stayed home from work and school Thursday to demonstrate how important they are to America's economy and its way of life. The boycott was aimed squarely at President Donald Trump's efforts to crack down on immigration, legal and illegal. (AP Photo/Patrick Semansky) (AP)
--

Once undocumented immigrants and asylum seekers arrive on American soil, they run the risk of being stopped by law enforcement officials who are charged with investigating their status. A Feb. 17 memo released by the Department of Homeland Security reveals how great this risk will be under President Donald Trump.

The department is planning to hire thousands of additional enforcement agents and has widened the scope of immigrants who are a priority for deportation. It also calls for an expansion of the 287(g) program that designates law enforcement officers as immigration officers, which poses a series of questions that are as of yet unanswered. What kind of training will they receive? Will they speak more languages than English? What are their competencies in areas such as cross cultural communications?

My research has indicated that many, if not most, encounters between noncitizens and police focus solely on the violation or crime, rather than immigration status. But accusations about arresting officers violating noncitizens’ rights through, for example, excessive force and abuse have raised questions about who is targeted, and why some migrants are arrested and others let go.

The stakes are extremely high for immigrants — especially at the borders and during traffic stops. Officers exercise discretion as to how to treat each case. The risk now is that officers’ decisions are being informed by a White House that claims undocumented people and asylum seekers are unwanted because they are criminals or terrorists. Research shows that exposure to anti-immigration laws can easily trigger negative racial attitudes within the population and among officers of the law. As the research of historian of ideas Marc Angenot has suggested, the social discourse is modified by proclamations coming from powerful voices, such as governments. So a version of reality that describes vulnerable migrants as criminals can affect what is said about migrants, and thus affect how an officer will choose to enforce the law.

Following up on my recent book, "Undocumented Immigrants in an Era of Arbitrary Law,” I’m focusing my new research on how language is at play during “first encounters” between migrants and officials in the United States. I’m interviewing officers and officials on the front lines to learn how language and communications affect whether and how they will enforce federal immigration rules, statutes and regulations.

From translating to interpreting

There are an estimated 11 million undocumented migrants in the United States, including those living in mixed-status households. This suggests that officers will have to make tough choices about enforcement. Language, among many other factors, can play an important role in these decisions. Most undocumented migrants speak Spanish, but even in a single language there are issues of accents, intonations and inflection. A Spanish speaker trained in Spain may have great difficulty understanding a Cuban speaker, for example, and given how crucial are these first encounters, the resulting misunderstandings could be very damaging.

When a person with a viable asylum claim enters America, or when an undocumented person is stopped by a police officer, the first challenge that the migrant faces is to simply make him or herself understood in English. In some cases, the officer has foreign language training, which can help. But even if there is adequate linguistic skill, communication issues are more than just the rendering of one language into another.

An immigration lawyer I interviewed indicated to me: “There is a cultural barrier. For instance, Guatemalans tend to be very deferential, so they do not want to answer any question directly. Many of their answers begin with: ‘Thank God that. . .’ and then just continue along beginning at a point that is two years before anything happened. [Even] for a translator it’s very difficult, because they want to just go all over the place, and the answer has nothing to do with the question.”

In such a situation, the officer has to fill in a lot of the missing details in order to understand key facts.

The hesitations of this Guatemalan immigrant may be interpreted as the logical unfolding of a complex intercultural interaction. Or, they could be seen as evidence that he is nervous because he is harboring criminal intentions. This is where the transmission of information moves from translation to interpretation, from a purely linguistic act to a kind of negotiation.

An unaccompanied minor seeking entrance to the United States through its southern border may invoke gang violence in Central America as the reason for his flight, and thus appeal to humanitarianism and international law.

A crop-picker who is pulled over by a police officer in a farming community might act with deference and respect, indicating family values and obedience to the law. Or, she might try to emphasize how much she is needed by the farmer who has employed her, and how important her labor is to the community and for the country.

Sociologist Pierre Bourdieu argues that linguistic interactions are like negotiations inside of a kind of marketplace. As such, the meaning of an utterance isn’t determined by a simple substitution of one meaning for one word. Rather, he says, utterances are negotiated, bartered, bought and sold as though they were goods.

An officer can choose to examine these wares and weigh their value. He can ask for more information about their origin, or even buy them.

Trump has been marketing utterances about securing our borders, and blocking certain types of migrants from entering the United States. What can migrants say to officials who are threatening to arrest and deport them?

What if they have grounds for staying, but don’t possess the linguistic wares required to effect the appropriate negotiation? Finally, how is a vulnerable migrant supposed to communicate all of the necessary facts of his case in a place that is hostile to his very presence?

The project involved interviews with all parties to the vulnerable migrant issue, including incarcerated migrants. In compliance with Vanderbilt University’s Institutional Review Board plan set forth in the project, all interviewees’ identities are kept confidential.