Hustlers are going to hustle: From East Baltimore to Cuba, the work on the street never stops

Free enterprise is alive and well on the streets of Cuba. Just look for Pedro, my ambitious and energetic guide 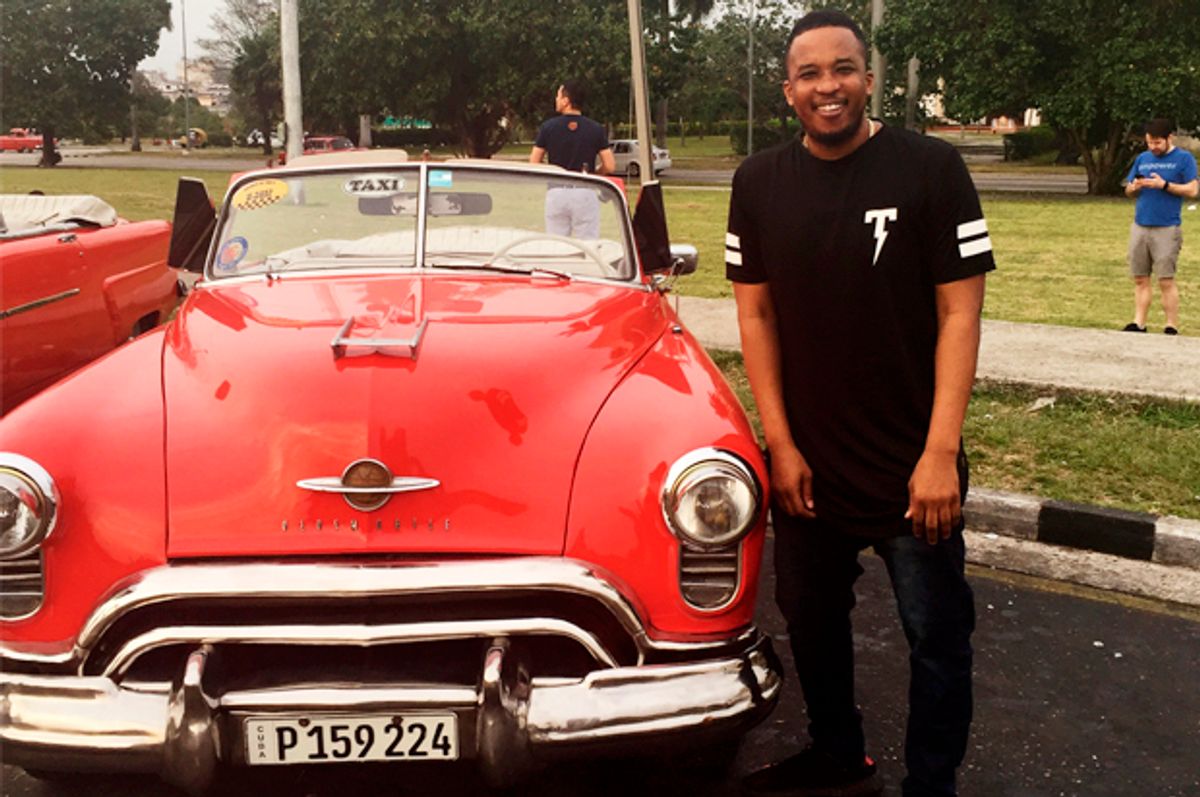 Americans can just go to Cuba now, thanks to President Obama, and it’s relatively cheap to do so, especially if you book a Southwest "Wanna Get Away" fare and stay at an Airbnb, so I flew out on a whim. To summarize my experience: I love the weather, hate the food and will forever be inspired by the locals.

The Cubans I met in Old Havana are hungry, and they hustle with a style and flair that reminds me of my East Baltimore origins: They slip in a good joke and then tax you based on how hard you laugh.

“Hola, senor!” said a guy in a white hat, white T-shirt about two sizes too small, tight jeans and sneakers.

“Oh, United States?” he replied. His accent when he switched to English made it sound like he had pinched nostrils. “I have family in New York, Brooklyn and Brooklyn. Where you from?”

“Baltimore,” I replied. “Most people never heard of it but it’s close to D.C.”

“You have family everywhere, man!”

He asked me about taking a tour in an old-school Cadillac or a horse and buggy. He had access to both with different prices based on one-, two- or three-hour options.

“I’m not ready for a tour, bro. And why do you have on so much white?” I asked. “You own a boat or something? Where’s the boat tour?” We both laughed.

“No man, I wear white because I’m Pedro. All my clothes are Zara. You like Zara right?” he responded, nodding his head.

We both laughed before I told him I was joking, but not really. “I’m too big for Zara."

It's refreshing to hear English in a place where everyone speaks Spanish. I know that sounds arrogant, but what I’m saying is I should’ve been prepared for the language difference. "I’ll catch a tour later if I bump into you tomorrow. Cool?”

This is my first time in Cuba. I had once thought it would be nearly impossible to visit in my lifetime, so I wanted to take long walks through the parks, look at the buildings and capture as many people as possible ripping and running through the streets on my own before I took a guided tour.

My Salon colleague Alli Joseph had hipped me to the basics, like carrying my own toilet paper and hand sanitizer, exchanging my U.S. dollars for euros before exchanging them again for pesos in Havana, and what the locals were like. I’m from a neighborhood called Down Da Hill, which is the Third World in America, and I've traveled to plenty of islands, so I know how to handle myself around people who make a living off tourists.

Day One was smooth: I explored, found a great restaurant near Central Park with the best caipirinhas in the universe and discovered the tour bus, which basically takes you all over the city for 10 pesos.

I started Day Two with a long bus ride all over the city before grabbing a bite at my new favorite caipirinha place.

Someone tapped me on my left shoulder. I turned around and Pedro, all dressed in white, was on my right side, laughing.

“Hey, Trump is bad!” he said, with two thumbs down. The guy behind him put his thumbs down as well. “But Obama good!”

It felt like everyone in the place raised his or her thumbs to God in agreement with his mini political rant.

“OK, Pedro, I want your cleanest drop top," I said. "But don’t take me to tourist spots. I wanna see how you live.”

He rubbed his chin. “Are you ready?”

“Yeah, bro,” I said, looking him in the eyes. “But I’m only paying 80 — I’m not paying anything over that — so please don’t keep trying to sell me stuff.”

We shook hands in agreement. The price we set bought me a full-day tour of art, fancy restaurants, hole-in-the-wall dessert spots and a look at how most Cubans really live. The dilapidated barefoot-family level of poverty didn’t surprise me — I’m from a rough spot and have a couple of stamps on my passport­ — but Pedro’s commitment to draining my pockets is what stood out the most. I’ve been bulk pitched by island locals before, but never by one with so many connections.

Restaurants, cigar spots, bars, museums — Pedro had a hand in everything. I don't spend under pressure, but I appreciated his commitment to pushing me to pump money into his connections until even he got exhausted by my refusal to crack.

I could tell he was frustrated with me for not spending at any of his desired locations. I wasn’t being an asshole — I didn’t really want anything his connections had to offer. But I’m a sport, so I decided to play along. I bought some cigars that I had turned down earlier in the day when Pedro's friend came at me again with a better price.

“Those are the best cigars in Havana!” Pedro said. “Now come try the best the food in Cuba!”

I let him drive me to this cracked unit near Old Havana where ladies in high heels, netted stockings and very short skirts answered the door. The room was full of Christmas lights, horse flies and pictures of a white Jesus. One of the servers brought me a menu. The prices were like 30 to 35 pesos for a chicken dish, after I'd had multiple meals, including alcohol, at nice restaurants for fewer than 20. I left, even though Pedro and the staff were upset.

At that point I realized that Cuba is in a weird place where they are just figuring out how capitalism works. Some of the goods and services were extremely cheap, while others were grossly overpriced, providing a wild variation of experiences for the scores of Americans flocking there now.

“Pedro, I had fun,” I said to my guide. “Back home, similar to you, I have like four jobs, so I respect what you are doing. But if I can offer some advice, from one hustler to another: Say what you mean, mean what you say, and sell people what they want.”

We shook hands and I hit him with an 80-peso tip, double what he had asked for.

“Share that with the people who deserve it," I said. "Peace.”