Show me the money: La La Land and the loving lap of capitalism 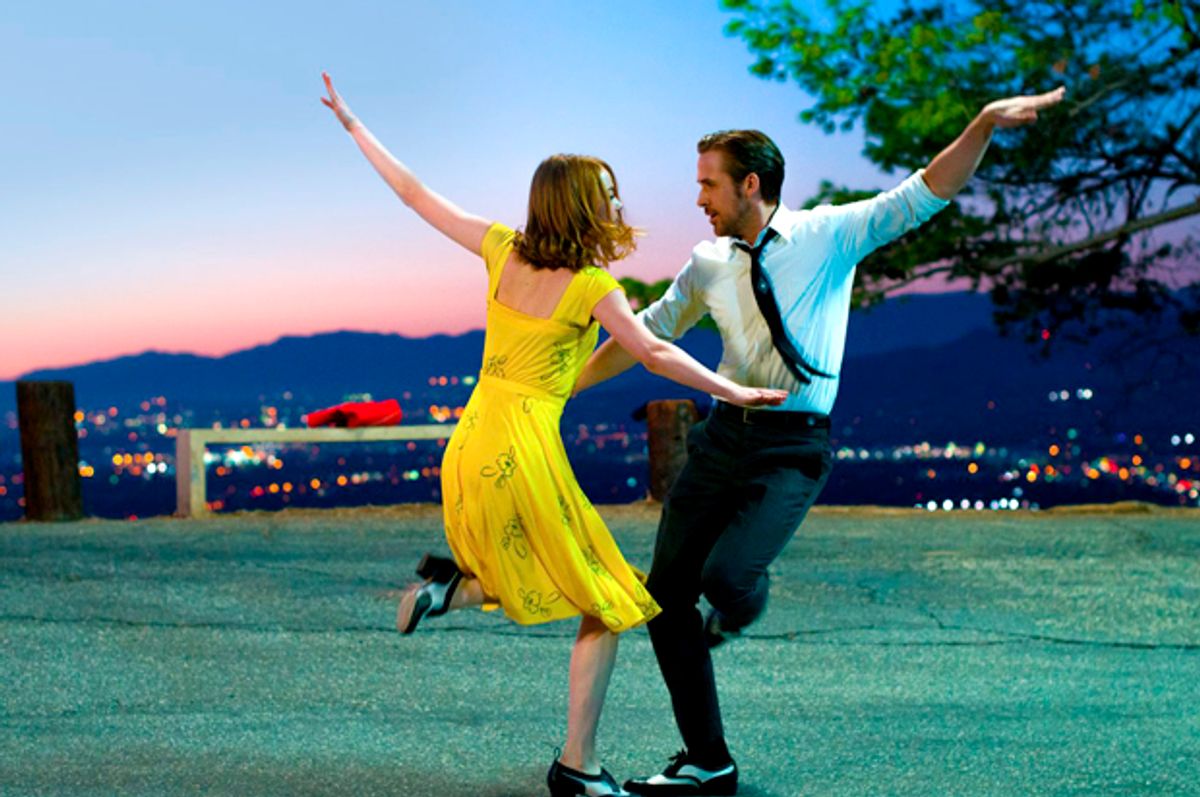 From its opening number — a cross between a restrained “Gotta Dance” from “Singin' in the Rain” and a demure “Hot Lunch” from “Fame”— “La La Land” promises a Hollywood musical about fools who dare to dream and dreamers who dare to be fooled, both about love and career, though never the twain shall meet. From the moment the nameless hopefuls hopefully leap from their cars on a stalled Los Angeles freeway and begin singing about how they left their small towns for Tinseltown and Emma Stone gives Ryan Gosling the finger, director/screenwriter Damien Chazelle promises both screwball comedy and a nostalgic paean to the gilded age of musicals past. For the most part, he delivers.

Listen, no one will ever be Fred and Ginger. As my wife would say, Fred Astaire is the Michael Jordan of dance. There is, however, a certain dreamy, floating quality to Mia and Seb — Stone and Gosling — that is more reminiscent of Astaire movies than, say, the deranged earnestness of Garland and Rooney. The hopeful hopefuls trying to make it in the big town and put on a show. And by make it, I mean, make hay and make hay. Let’s remember that Fred Astaire movies were big at the height of the Depression. In fact, all movie musicals of this era are about class and entitlement. (See “Gold Diggers of 1933.”) Thus the obsession with the rich people falling down in the mud and the idea of the madcap heiress in a gilded cage or the girl who struggles as a dance instructor becoming a big star (“Swing Time”). Interestingly, aside from the Golden Age — the forties and fifties — the leaning of the Hollywood musical is more rom-trag than rom-com. For one, the music people were listening to on the radio had changed. “Hair” happened. While Broadway is mostly built on nostalgia and happy endings, “Hair” was a takedown of the establishment that basically ruined musical theater for the next 20 years. Meanwhile, “Grease,” a puff-piece valentine about a nice girl who puts on hot pants so everyone will like her, stole America’s left ventricle and reminded us how fun it was to be a slut and a delinquent and then get into a car and fly away.

When you really think about it, the “Grease” blip makes total sense after Watergate, as “La La Land” does in the era of 45. America hated all agents of power. Hollywood began banking on the fact that people were trapped in a nostalgic reverie of epic proportions. People knew America was in the shitter. The country witnessed an expansion of an earlier trend from pre-Depression capitalism that operated in a narrow band of faith. In short, the Depression, put on pause, merely popped up in the seventies. Thus the message of musicals: Democracy is a lie, capitalism is flawed, so forget that sunset, kids.

Capitalism may also be why the ol’ juggling-love-and-career trope rears its seemingly sexist head in “La La Land.” It’s not that Mia should choose a man over vocation as Annie Oakley was forced to in “Annie Get Your Gun,” as much as a bittersweet reminder of what still keeps us apart. How who we were make us who we are and what you have to sacrifice to make it in this lousy world. Is Seb a sellout? Is Mia? Does it matter? In America, the two most coveted dream gigs are movie star and rock star and this film kinda brass-rings it for both, at least from a bank account perspective. Aside from the song “The Fools Who Dream,” one of the most poignant moments in “La La Land” is when Seb listens to Mia talking to her mother on the phone about his lack of work as he gazes sadly at a rust stain on his popcorn ceiling. The rust stain is his stalled career. The death of jazz. Maybe even Hollywood itself.

True, class tension exists in all comedy, especially musical comedy. See Plautus or “A Funny Thing Happened on the Way to the Forum.” The low-person-brought-high gives itself over to certain types of story that make it easy for a storyteller to expose a certain tension in certain systems about power and desire. This is what commedia is about. Love and money, the girl and the gold, hearts and dollar signs and the itchy impossibility of trying to get both simultaneously. In “Thoroughly Modern Millie,” Millie, a lovable gold digger, comes to the big city to get a job and marry a rich man but instead ends up with a “green-glass love,” AKA the dorky loser who, lucky for her, turns out to be the son of an heiress.

What’s more, as Watergate made America embarrassed about itself, the idea that sad endings were more real and relevant pervaded." Grit was good. Movie musicals, even those with “happy” endings, moved into complex territory. Even “Sound of Music,” the most successful movie musical pre-Nixon, was a harbinger of bittersweet endings to come — The von Trapps cross the Swiss mountains on foot only, oh wait: all the Jews died in an oven. “Cabaret” is both about the Holocaust and wacky broads who make life out of tragedy. “Chicago” has a happy ending about two vaudevillian murderers who manage to get away with it, and in “Rent,” Mimi, another performer, somehow rises from the dead, though we can only assume this will be short-lived.

In Baz Luhrmann’s “Moulin Rouge!” we see the entire debate between love and money writ large. Will the hooker with a heart of iron pick the penniless artist or will she sell herself out to the wealthy man? Obviously, we’re supposed to root for Ewan McGregor and hope that Nicole Kidman joins him to starve in a garret. Because rich people are villains and capitalism equals the root of all evil. Money bad. Heart good. Only Nicky Kid dies in a big musical number in front of all of Paris, so not only does the whore die — yeah, yeah— but capitalism dies; so what are we left with? A new kind of story, where the nice rebel boychik gets his start in show biz by writing a tale that will live forever. Welcome to Hollywood, Mr. Arnstein.

“The Umbrellas of Cherbourg” is the anti-“Moulin Rouge!” yet with a more rueful intensity. It’s about love and life and what could have been and can never be because of class and family and war. At the end of it all, Geneviève rolls up at Guy’s gas station in a Mercedes looking fab and they have a chat and then they say a wistful goodbye. Snow is falling. He kisses his children. There is, in this film as in “La La Land,” a sense that these characters wound up with the life they needed to have. I mean, Catherine Deneuve pumping gas? Get real. It’s not that they shouldn’t love each other, it’s that they cannot have a happily ever after. What’s romantic about “Umbrellas” is that they tried. . .

Maybe it’s not that love and commerce can’t intermarry, or that the girl can’t get the guy and the gig and the gold. Indeed, the pull of rich versus poor wages a strange war on a country’s heart. Who knows. Maybe they can still be friends.