Intended as a celebration of the dreamers, the ersatz six minute shot is, in reality, a cavalcade of conformity 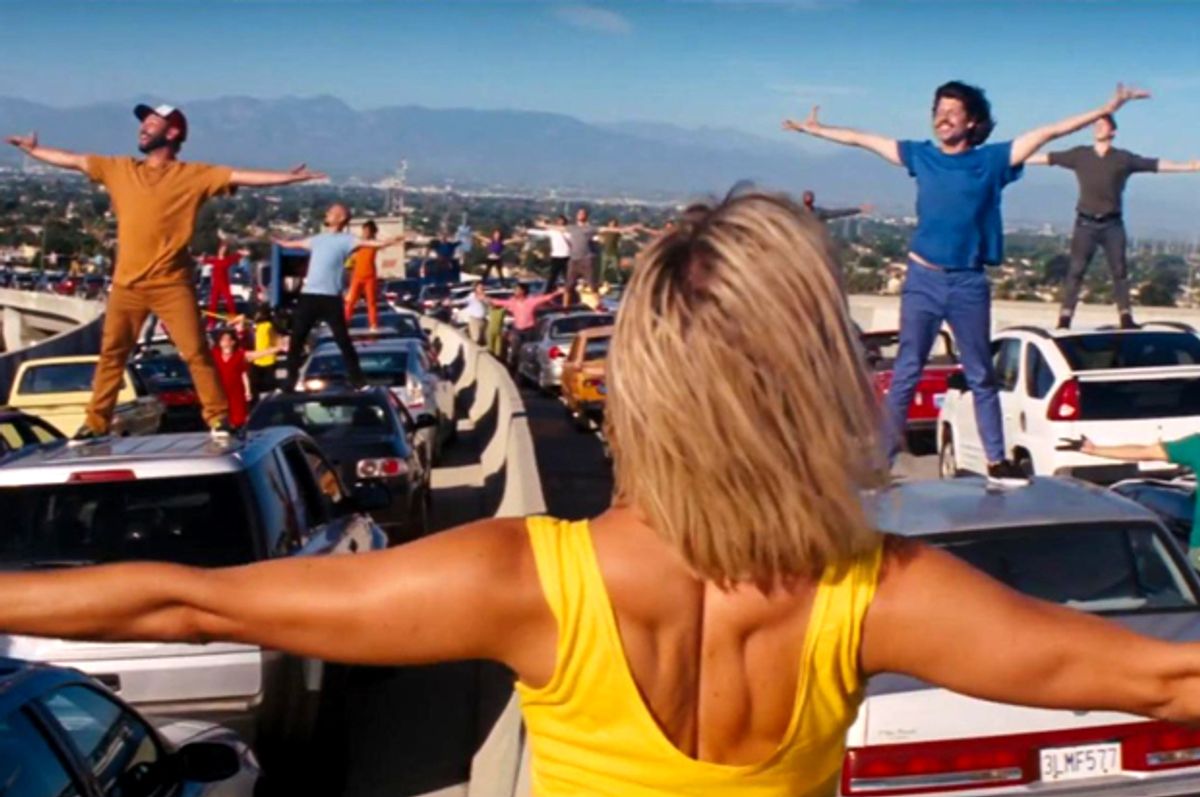 “La La Land” is the story of Hollywood dreamers. “Another Day of Sun,” the now famous opening sequence is a first wrong step. The scene was designed to appear to be a single shot almost six minutes long. While the opening spectacle is meant to be a celebration of the dreamers, it is a spectacle without life. The dreams they are pursuing inadvertently end up being a celebration of falling in line with corporate America.

Mia (Emma Stone) and Sebastian (Ryan Gosling) are not lovers torn apart by war, religion nor ideology, but, more tragically perhaps, by their ambition and the pull of their careers. Ambition trumps love, romance and the heart.

On the 105 ramp heading north, a place rife with existential crisis, Mia and Sebastian land next to one another jammed under the perpetual sunny stagnation. Mia rehearses for an audition in her Toyota Prius and Sebastian idles in his 1982 Buick Riviera convertible. Their only engagement, the call and response of a honk from Sebastian and Mia flipping him off. We all know where it's going and we are hoping it’ll blossom and take us to unexpected heights.

Stuck between freeways, these characters hope to get moving in their careers and to feel the satisfaction of success. Perhaps what the filmmakers were intending to say is that these two are just like everyone in LA with big Hollywood dreams and normal everyday lives. They are in purgatory between reality and fantasy and missing what's right next to them.

A single opening shot intended to communicate a clear, purposeful, and illuminating idea works when the idea is grand — like Welles’ “Touch of Evil,” where the camera pulls back from Mexico to America peeling back layers of corruption, or Kubrick’s “2001: A Space Odyssey” that explores the relationship between God and man or parent and child, or the perfectly choreographed Hollywood opening of Altman’s “The Player.” Here the shot is filled with images that are meant to feel big — hundreds of extras dancing against the wide open horizon of the Los Angeles urban desert — but the ideas are small and an emotional and physical claustrophobia settles heavily over the canvas.

There are many magical moments in “La La Land” but in the single take, opening sequence the camera makes even the seasoned cinephile says “how did they do that?” (the making of it is on youtube). The result is that we start thinking of all the technicians sweating in the sweltering LA sun; the grips, operators, catering, teamsters, wardrobe stylists, makeup artists, PAs and massive amount of logistics. The how is a steady-cam and cranes and CGI to stitch together three shots to make it one. Impressive.

Because the director Damien Chazelle has enslaved himself to this single shot he doubles down on the emptiness of the moment. the basic notion of one single shot suggests one clear thought. One continuous idea that sets the stage for the film we are about to see. It is an establishing shot and it indicates the where, when, and why about the film. But here it’s muddied by all that LA cinematically suggests: corruption (“Who Framed Roger Rabbit,” “L.A. Confidential,” “Chinatown” et al), advertising, and the fossil fuels industries grip on LA and our American lives. But we are disconnected from the heart. It’s all done in the most glossy, technicolor and innocent way. A flash mob interred in Gulag Hollywood.

We sit there watching this 80s music video with hood sliding transitions that feel more like outtakes from a Scorpion video.

Perhaps what is missing here is the slightest hint of irony? Later in the film the musical numbers shift and do become more ironic, but our first impression is slack-jawed innocence. This tone is a clear choice from the straightforward musical number with sickly sweet lyrics like. . .

I'm reaching for the heights/

And chasing all the lights that shine/

And when they let you down/

You'll get up off the ground/

All sung to the mash up of dance and parkour. But It’s far from singular and cohesive.

For all the attention it generated, the opening sequence harkens back to classic musical with its attempt to set the stage for the entire film, but it’s actually the later dance number, “A Lovely Night,” which is designed beautifully and is ultimately more fulfilling. That number reminds us of old Hollywood and makes us yearn for simpler times, ideas and ideals. We hope these two will join forces, fall in love and fight the windmills together.

This opening, which was rumored to have almost hit the cutting room floor, feels all about the grunt work without the joy. Is that really the point? Is dancing and creating really digging ditches for the giant corporate Hollywood machine? I felt like I was watching Ridley Scott’s 1984 Apple commercial. Cyborgs in a dystopian future. But this case it seems like the foreshadowing of our dystopian present. Only there was no hero to shock us out of our stupor.

The flexible camera doesn't pull back to give us the breadth, scale or the majesty of ambition. So are we to just meant to stay in line? Is this the new take on old Hollywood. It would be my guess that the filmmakers fell in love with the notion of what they could do with the dancer, the camera and a huge budget before they actually understood what they were trying to say. It’s intoxicating to think that you can enlist an army of artists and capture it all in one breathing taking shot. Something that probably happened as the project moved from an indie to big budget. But the resulting message is. . .

Be a good worker and you will be rewarded?

Is this an ode to conformity and a rejection of independence? Are the filmmakers telling us that we should sacrifice the self for the state? Only through work can we be happy. Oh, to see a drummer bleeding as he really strives for his real passion.

It reminds me of bumping into an old friend on the street and asking, “Man how are you?”

“Busy,” he responds. “Better get back too it. Time is money.” (This isn’t the same as how you are. This is the only proof that you have value if your value is wrapped up in being socially accepted because you are working the hardest)

Back to the movie. . . “La La Land” the opening sequence suggests the rejection of love. But what it’s replacing love with isn’t an equal substitution. The characters instead seem to be longing with total sincerity for a place in the Hollywood machine. Do they really have to give up their love for their careers in 2017? In the age of constant connection can it not survive? Is love so valueless that it’s so easily crushed by the weight of vain ambition? The Exit Ramp Dance extravaganza is simply an empty grandiose gestures without the depth of real humanistic values; overblown and overstated, vapid. Is this how we are making American cinema great again?