Cater-waitering the Oscars: My glamorous night at the Academy Awards, feeding canapés to hungry stars

Have you ever dreamed of going to the Academy Awards? What about if I put a tray of smoked salmon in your hand? 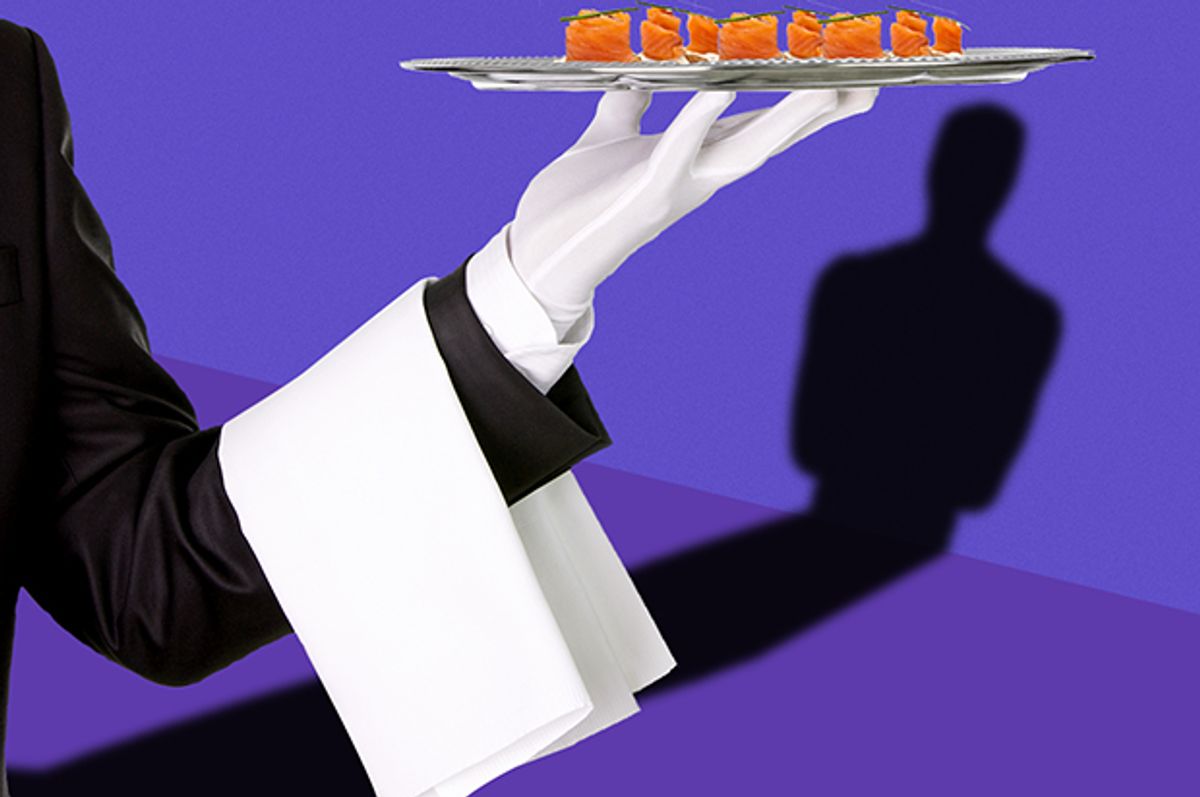 Facebook
Twitter
Reddit
Email
It was 2013 and I was between jobs working as a production coordinator on low-budget made-for-TV Christmas movies. I was running out of money fast, but with a decade of food service experience behind me and a few handy connections, I managed to snag a position as a cater waiter for the 85th Academy Awards. It began, as most glamorous assignments do, in a parking garage somewhere south of Sunset Boulevard.

Working the Oscars is the Holy Grail of catering gigs — it’s reserved for SEAL team-level slingers of hors d’oeuvres. I'm standing in a dark and drafty parking garage, where I’ll be vetted before being allowed anywhere near the Dolby Theatre on Hollywood Boulevard. An exhausted woman in an Arizona State sweatshirt inspects my shirt for proper starching before handing me a questionnaire in which I am asked to detail my gastrointestinal health:

“Have you, in the last two weeks, experienced any of the following?

Listen, I understand that no one wants Amy Adams to get infected with embarrassing bathroom issues on her big night, but detailing my bowel habits to a non-medical professional in the concrete shadows of a parking garage steals a small part of my ego that I will never get back.

But it’s Oscar Sunday. I shake it off.

I’m on a bus filled with the other A-team cater waiters and we’re barreling down Hollywood Boulevard. The streets are barricaded and gawkers ogle us from the other side of eight-foot-high chain link fences. I’ve never been chauffeured down a barricaded street and it dawns on me this is the closest I’ll ever get to feeling like the Pope.

The bus drops us off at the back service entrance and we’re ushered through a purgatory of fluorescent-lit back hallways and service elevators until we emerge on the rooftop of the Loews Hollywood Hotel. I pause just outside the service elevator to take in the Hollywood sign gleaming in the near distance. Its crooked white letters seem to tip their hats to me as “Somewhere Over the Rainbow” plays over the PA system. The memory of that ego-snatching gastrointestinal questionnaire begins to melt away under the cloudless blue sky. Hollywood, baby.

A catering manager approaches me. She has the air of a Virgin Airlines stewardess: polished, hospitable and better-looking than anyone else in the vicinity. She hands me a Diet Coke and a bag of Popchips.

“Take a load off,” she says and waves me toward the aquamarine pool where dozens of cater waiters clad in identical black button-down shirts and clunky yet practical Dansko clogs have already settled into chaise longues.

I’m guessing you’ve never considered the question: “Where do good cater waiters go when they die?” But I’m going to answer that question for you anyway: They go to the rooftop of the Loews Hollywood Hotel on Oscar Sunday. It is the Happy Hunting Ground of the Cater Waiter. If you’ve ever had the soul-crushing experience of being forced to smile at the one-percent while offering grilled cheese sliders topped with fig compote on a silver platter, only to go home at the end of the night to face the reality of your empty bank account and shattered Hollywood dreams, then this? This is your very great reward.

I settle into one of the chaise longues. To my right, a James Dean type catches my eye. As if taking a cue from a John Hughes movie, he lowers his sunglasses to get a better look at me. Before sliding his sunglasses back up, he gives me a suave two-fingered salute. Zowie.

On my left, a cherubic young man takes a lint roller out of his pocket no fewer than three times to de-lint his apron. His clogs are spotless, polished to a fine sheen. He looks at me with dead seriousness: “I’m so ready for this.”

I am too. I’m ready for the catering gig of a lifetime.

3:58 p.m.: The back hallways leading to the Dolby Theatre

With 50 or so other catering servers, I make my way through more fluorescent-lit back hallways, only this time they lead from the hotel to the core of the Dolby Theatre. As we march silently toward our hallowed call of duty, maintenance workers pause their sweeping and mopping to applaud us. Damn. Even they know this is going to be a catering tour de force.

It is the calm before the storm. The lobby is empty. I’m holding a heavy platter of lavash bread, topped with smoked salmon, that’s been cut into the shape of an Oscar statuette. To my left and right are cater waiters holding trays of champagne. My anticipation is high. I’ve been watching the ceremonies since I was a little kid and now suddenly here I am, actually at the Oscars. I attempt to steady my nerves.

Chillax, I counsel myself. All you have to do is hand out these weird Oscar-shaped hors d’oeuvres. It’s not like you have to make a speech tonight. I take a deep breath and wait for the A-list to arrive.

I wait for a solid hour holding the tray with my arm bent at a 90-degree angle. My elbows are locking up and I can’t stop thinking about the recessed lighting in the lobby. Are those LED bulbs? LED bulbs make everything look depressingly Soviet. Very unflattering design choice, in my opinion. Why would they make Amy Adams frolic under LED bulbs on her big night? I hear the cater waiter to my left sigh loudly. I look over and notice how the LED lights really bring out the bags under her eyes, make her look —

And just then, the doors swing open. A river of Academy Award-nominated actors streams toward me in an hors d’oeuvre-driven stampede. I had grossly underestimated how hungry celebrities would be after having starved themselves for three weeks to fit into their designer gowns and tuxes.

“Here you go, Joaquin. Reese, would you like a second helping? Of course I have a napkin for you, Nicole!”

Riding high, I waltz through the lobby, smoked salmon in hand. I am popular. I am powerful. I am a purveyor of fine snacks to the stars.

At one point, I spot Jessica Chastain lingering coolly some 20 feet away, utterly uninterested in smoked salmon cut into the shape of an Oscar. Her skin is like fine china and her copper hair frames her face in soft waves. She throws her head back in an easy laugh, exposing a set of perfectly pearly teeth. And even though she’s standing quite still, her rose gold gown appears to sashay around her.

I am suddenly nicked with a razor-sharp self-consciousness. Everything comes into sharp relief: the black necktie I’m wearing that makes me look like a boy, the gazpacho stains on my apron, the blonde hair pulled back into a severe bun with two inches of exposed dark roots, the smudged makeup already melting off my face.

This moment steals another small part of my ego that I will never get back.

You always have it good until you realize someone else has it better. And this becomes most obvious when mere mortal cater waiters compare themselves to immortal Hollywood stars.

12:30 a.m.: In the back hallways and service areas of the theater

It’s hour 12. My self-respect is sinking to new lows. I’m crumbling under the drudgery of stacking champagne glass racks and scraping bits of dried smoked salmon into trash cans. I’m ready to bash my head in with an Oscar statuette. I concentrate on looking busy and concerned so that no one will ask me to haul a big black bag of garbage out to the dumpster. Oscars or not, garbage is garbage. I’ve already been to the dumpster three times.

The handsome James Dean type is sitting next to me. His name is Abel and he looks every bit as disheveled, disillusioned and disheartened as I feel.

He looks at me, perplexed. “I have a college degree,” he says.

He laughs. For the first time today, I feel a true rapport with someone, I feel like myself.

Abel Greenbaum tells me he is working on a novel, but also dreams of one day opening a “sexy haunted house.”  A “sexy haunted house” is truly the last thing I am interested in and I pray to God he won’t elaborate. But I tell him it sounds “very cool” anyway. I’m willing to a lie a little if it means I can top off this day with a little quality commiseration.

I head south on the 101, the lights of downtown LA’s skyscrapers towering ahead of me. The rooftop of the Loews Hollywood Hotel already feels like a dim memory, a lost beacon of hope. Reality, as always, has proven itself to be a lot less glamorous — filled with LED bulbs and compromised egos and the fact that there are people who think that cutting smoked salmon into the shape of Oscar statuettes is a good use of time.

Anna Anderson is a Los Angeles-based writer whose work has appeared in the LA Times, Bustle and The Billfold.