It's National Eating Disorder Awareness Week, and once again, I'm not participating

What does it mean to be "recovered" from an eating disorder? And why does NEDA focus so intently on that language? 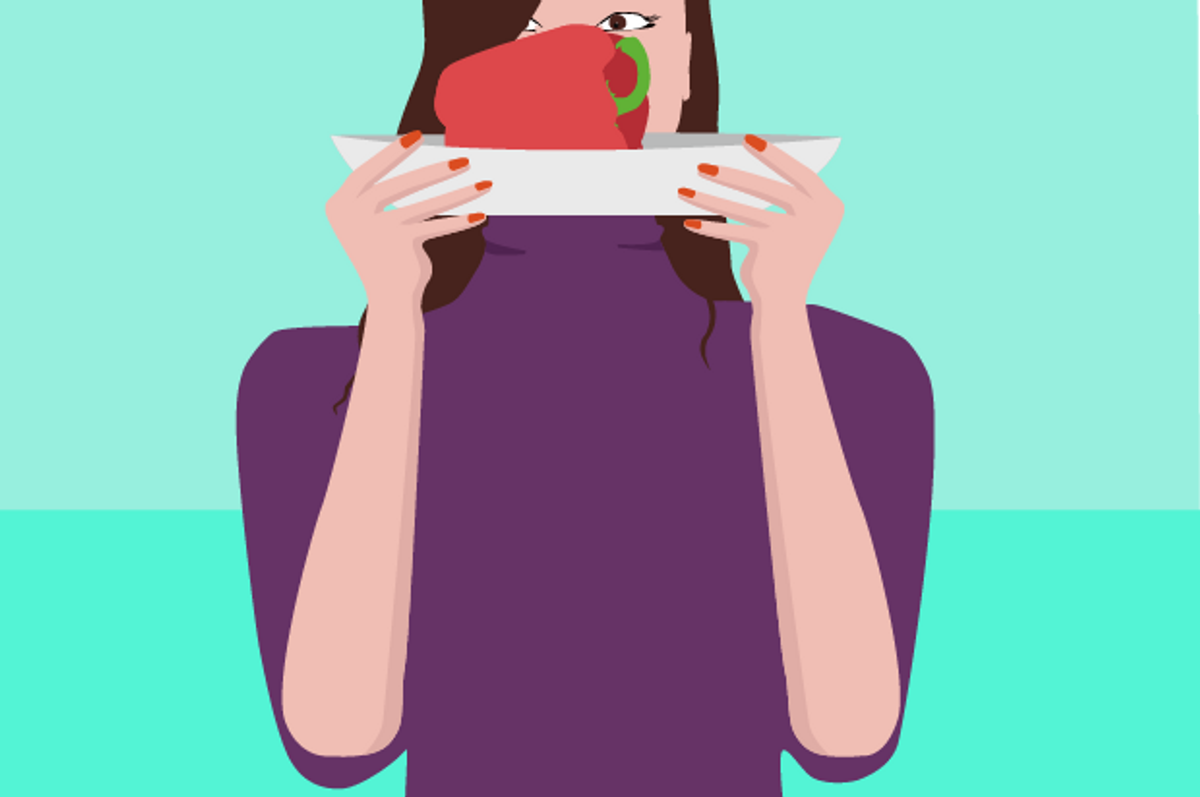 Even vegetarians lapse in California — such is the pull of In-N-Out Burger. My first time in the state, on the ludicrous heels of the foie gras supplement at The French Laundry, I ordered fries and a cheeseburger (Animal Style) at the zoo passing for a fast food chain at Fisherman’s Wharf in San Francisco. That’s a long way of saying that I wasn’t surprised a few days ago when my friend, admittedly not a burger fan, wanted to hit the drive-thru before the end of her trip to the West Coast.

"I still worry about you," she said, as we left In-N-Out.

She was referring to my eating disorder. I watched the road. She’d ordered food; I’d ordered a Diet Coke.

"I'm the healthiest I've ever been," I said.

That was true, and I made a point of both showing and telling its trueness: I stole a few fries and chattered about how good fountain soda could be but how weird it was going to make me feel since I’d basically cold-turkeyed the habit a decade ago, when I learned from a dietician’s handout that artificial sweeteners caused lab rats to binge.

Because sometimes I eat three balanced meals and three snacks like the meal plan I was prescribed a decade ago when I spent a winter break doing in-patient treatment for my purging anorexia and other times I eat many cups of raw vegetables or popcorn for lunch. Because according to my current therapist, popcorn is a snack, not a meal; popcorn is a problem. Because one of my new year’s resolutions is to work out every day and, before my friend’s visit, I didn’t miss once. Because I go shopping a week later and devour the compliments of saleswomen plying me with sweet nothings about my waist. Because my waist, objectively, as in according to the pink tape measure I still keep in my makeup bag, isn’t actually that good, not even with everyday exercise, not even with cups of raw vegetables, not even with six feedings a day. Because I know what comes up at the end of the month.

The last week of February is designated by the National Eating Disorder Association (NEDA) as National Eating Disorder Awareness Week. Once again I won't be participating. There are options. I could be walking for the cause along the beach in Santa Monica, showing my solidarity with a leisurely calorie burn. I could be championing my “Recovery Heroes” (though at the time of writing this essay, I comprise 1/452 of the video’s viewership). I could be showing my support on a T-shirt: “Strong beautiful me” printed on the “longer length, easy fit” scoop neck from Aerie, Aeropostale’s sister store; 100 percent of the profits go to NEDA. The organization encourages its Twitter followers to “wear your support for #bodypositivity and #recovery on your sleeve -- literally.”

But I won’t do any of that. (Plus: Body positivity, NEDA? Really? I imagine all the ED teens who shop at Aerie, deciding they’ll buy that shirt a size too small and use it as thinspo to starve.)

No matter that my doctors, dentists, therapists, nutritionists, colleagues, students, professors, yoga teachers, best friends, foes, family and husband (and probably even my Chihuahua) know I’ve struggled with food since 1998. No matter that I’ve written articles about the need for better literature about eating disorders or the importance of recognizing body neutrality, the recognition that — whether they're weak, strong, fat, skinny, toned, tanned, turgid, curvy, zaftig — bodies don’t need to be beautiful. (Didn’t Lucy Grealy say this twenty-something years ago?) (But, also, maybe our culture’s limited vocabulary, the one that leads to overreliance on tired words — beauty, beautiful — is part of the self-as-physical obsession that NEDA, I think, probably would admit to identifying as a problem not unrelated to eating disorders.) No matter that my first novel is filled with eating disorders, just like the first poem I wrote more than 20 years ago was filled with eating disorders. Even though my world has become bigger than the mirror and the scale and the measuring cups and the 00s or the 23s or the XXSs, I still believe in the importance of representing that shrinking world. Because even when the world becomes bigger, it is and it isn’t.

Even without amenorrhea or purging or calves so knotted from the gym sleep is impossible or a lumpy bed at a decent treatment facility, I still have an eating disorder.

And every year, NEDA Week confuses awareness with absolution. I remember when I first learned about it: I was 16, marking three years with anorexia, and I couldn’t make myself throw up for all the size 1 Bubblegum pants in the world. The Student Council at my high school had taped up images of a waify brunette, fingers jammed down her throat. The pictures were everywhere — in the lunchroom, in the library, in the bathrooms where they taunted me on the backs of stall doors.

I hated those pictures. So did a friend of mine at the time, a boy I knew from art class, who liked to chew and spit oatmeal cream pies over the studio trash. We tore all the posters down and covered them with tempera paint.

We were angry. If I were walk to the pier in Santa Monica, I would be angry. No, I wouldn’t be angered like I was when I was 16, when an eating disorder felt like my private property and those posters represented an invasion, a ham-fisted trespass that irritated and triggered me. They were, my friend and I decided with our hands streaked with paint, in poor taste. Haha, we laughed, poor taste. We slugged our Diet Pepsis.

Now, though, NEDA makes me angry because it makes me feel trapped, excluded from a club to which I thought I’d earned a lifetime membership. When my friend and I muddied that skinny model on those photocopies, we were experiencing our eating disorders the same way; it didn’t matter that I’d never chewed and spat and that he hated to run. Our intention was the same, very '90s, very Fiona Apple: making a mistake, being bad on purpose. I’m not that 16-year-old anymore — and I’m not the waif on that poster — but I don’t see myself as the face of NEDA either. None of the people I know with eating disorders joined that club. They got better or they didn’t, but, either way, they kept quiet.

The language of “body positivity” and “recovery,” as optimistic as it is, doesn’t leave room at the table for the vast spectrum of people whose eating disorders — in all their messy, vacillating, tentative particularities — don’t let them identify or want to identify as recovered, who don’t want to disavow the disorder that has shaped their relationships, their worldviews, their lives. Just like the victory of reaching a goal weight proved disappointing, so too, are the victories of recovery. I remember leaving the hospital and counting days without a behavior: no binging, no purging, no overexercising. When I purged, I called it a slip and tried to get counting again. It was exhausting and boring, the focus on counting. It felt like the same old thing all over again.

Now, a decade out of the hospital, I’m hesitant to publicly disavow a major part of my life and my identity. Without an eating disorder I wouldn’t have become a writer. Without an eating disorder I probably wouldn’t have learned to revere, to consider, to enjoy food. Isn’t that recovery enough — being able to enjoy the foie gras at The French Laundry, even if I feel a little gross admitting it?

I imagine there are many like me, people with eating disorders whose to-do list doesn’t include recover. Maybe they grew up reading Marya Hornbacher’s "Wasted" like I did. Maybe they internalized Hornbacher’s “state of mutual antagonism” with her eating disorder, the one that leaves you shaking at the end of her memoir, the one of which Caroline Knapp in the New York Times wrote: “This lack of resolution is both the book's strength and its weakness.” Maybe those loose ends seemed true to the 13-year-old I was when I first decided I wanted an eating disorder — like, if the toil of my illness had to end, at least there would be a healthy kind of perspective, a freak oasis of moderation. I could have an eating disorder, of some kind, forever. It’s terrifying and comforting.

Given NEDA’s “It’s time to talk about it” campaign (#NEDAwareness), I hope that our cultural dialogue about this subject can leave room for people whose relationships with their eating disorders are marked not only by admission but ambiguity. I don’t identify as recovered because to do so would be lying. To be recovered would be to have been given an esophageal transplant, a heart transplant, a brain replacement. Recovery would mean swapping out the consciousness that has given me the strength to get through some shit, to process the world on my own terms.

Today was a regular food day: I weighed myself three times, exercised for 45 minutes, ate three balanced meals, and two squares of milk chocolate for a snack. The last part I feel not-great about, but also it was fine.