Lawn and disorder: America's obsession with the perfect home lawn is terrible for the environment

American yards are wreaking havoc on the ecosystem. Is a new era of landscape design just around the rose bush? 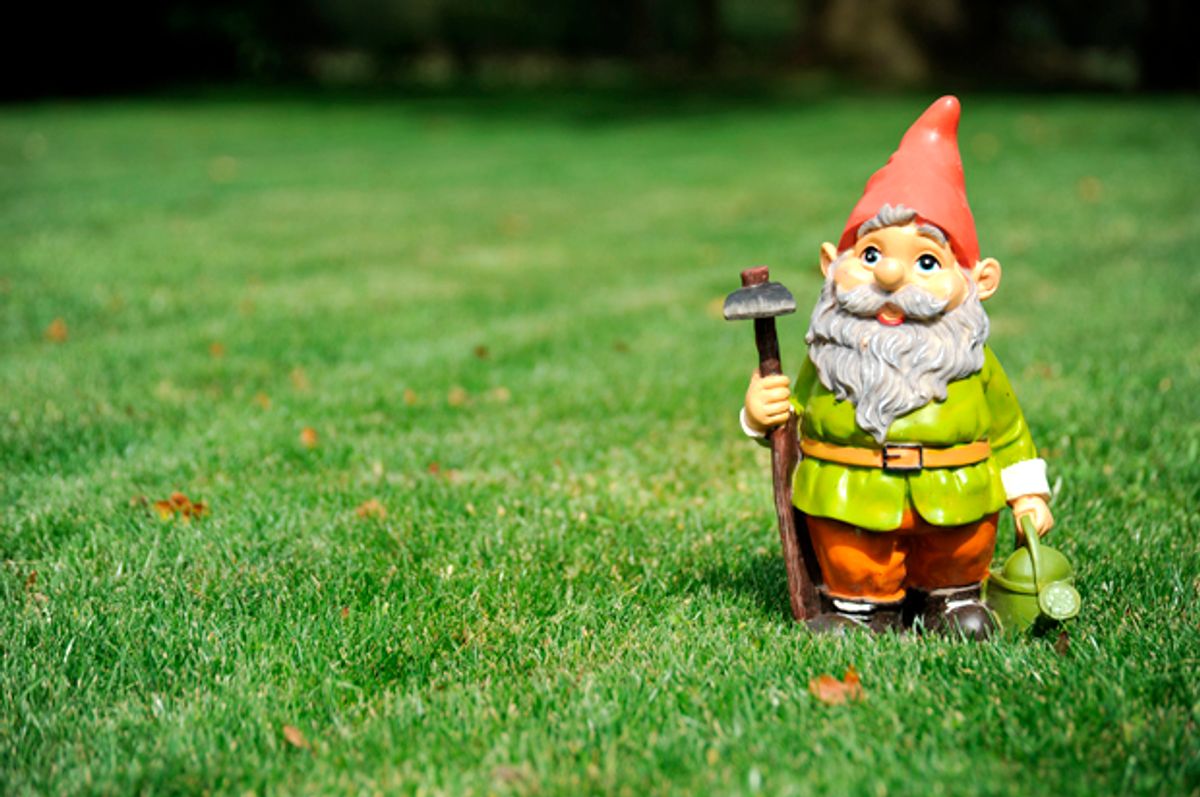 It may give you a place to barbeque and to stash that artisanal garden gnome crafted in the likeness of Noam Chomsky, but your manicured backyard isn’t good for much else. Lawn, the most abundant irrigated crop in the nation, is destroying the planet and imperiling a number of species — including the human species. In other words, the grass has got to go.

The American obsession with a close-cut patch of green has its roots in 17th-century Europe. Castles in France and England at the time were guarded by men whose vision couldn’t be obstructed by wild shrubbery in case anybody decided to lay siege, so grazing animals were used to trim unruly vegetation. Since these castles belonged to the wealthiest landowners, a smooth property became a status symbol, and that mentality has carried over into the modern-day American ’burb. All that time you spend mowing and raking and weeding? Blame it on the landscape lust of some disenfranchised peasants.

Somewhere along the line, well-groomed turf also became symbolic of a well-rounded masculinity. In 1999, The New York Times reported that “obsession with lawns seems overwhelmingly a male prerogative, maybe the next big guy thing after smoking cigars and swilling martinis.” Then last year, in the National Review, ubiquitous lawn services that leave the weeding to someone else were cited as one of the reasons young men increasingly “don’t have common touchstones for what it’s like to grow up to be a man.” Emphasis theirs.

But while expansive lawns may impress the neighbors, razing wild areas to plant non-native, low-growing turfgrass is wreaking havoc on the earth. On his blog, ecologist Jameson Crumpler calls lawns “rural monoculture eyesores that displace native ecosystems at a rate between 5,000 and 385,000 acres per day . . . and they provide no benefits over the long term; no food, no clean water, no wildlife habitat, and no foundation for preserving our once rich national heritage.” Put another way, these lawns (and the pretty but useless bred flowers we decorate them with) are wastelands for the endangered honey bees, hummingbirds, butterflies and other creatures we need to pollinate our food supply.

Additionally, the mowing, trimming and blowing required creates air and noise pollution (not to mention health risks to equipment operators). According to one Swedish study, using a mower for one hour has the same carbon footprint as a 100-mile car trip. And after we’re done cutting our grass down to size, we water it… so we can cut it again and repeat the process ad nauseam. At a time when California is drying up and international conflicts over water scarcity are set to increase, more than 30 percent of the nation’s drinking supply is devoted to lawn irrigation.

Or, as Michael Pollan put it in his book "Second Nature: A Gardener’s Education": “It occurred to me that time as we know it doesn't exist in the lawn, since grass never dies nor is allowed to flower and set seed. Lawns are nature purged of sex or death. No wonder Americans like them so much.”

Perhaps most distressing, because our lawns are made of non-native turfgrasses and flowers that don’t thrive naturally in the U.S., we treat them with chemicals with known health and environmental risks. Americans go through 90 million pounds of fertilizer and 78 million pounds of pesticides per year. These make their way into our groundwater and into the sea. In the ocean, the nitrogen and phosphorus from synthetic fertilizers create large blooms of algae that leech oxygen and create dead zones. One such area developed off the coast of New Jersey in 1975, resulting in a $500 million loss to the fishing industry. These realities prompted New Jersey to pass the most restrictive fertilizer law in the nation in 2011, but it’s been difficult to enforce.

Considering that lawn covers 40 million acres in the U.S., the scope of the problem is extraordinary. So what do we do about it?

Gray water initiatives in drought-ravaged California have encouraged homeowners to recycle H2O from the sink and bath for lawn watering, so we’re not wasting potable water. Others are turning to human urine as a replacement for chemical fertilizer. In each state, soil labs will test your dirt to help determine the exact quantity and kind of fertilizer you need, so you’re not over-pouring, which can do more harm than good to your hydrangeas. But the real solution may be limiting the amount of grass altogether and creating, instead, the American Backyard 2.0.

People are increasingly replacing their lawns with more sustainable alternatives like organic mulch, decomposed granite, concrete or gravel. They’re also opting for the less manicured look of native plant gardens by selecting species that thrive naturally in the area. The concept, known as rewilding, helps prevent erosion, contributes to biodiversity and requires less water and fertilizer. Translation: Rose bushes are out, meadows are in. Tame and pretty is slowly being uprooted by wild and functional.

Enthusiastic hobby botanists are geeking out on plant compatibility research, like that conducted by the NRCS Plant Materials Program, which seeks to determine which plants can work together to create a self-sustaining ecosystem in your backyard. For instance, legumes like clover produce nitrogen that can be used by certain neighboring plants, eliminating the need for chemical fertilizer.

“It’s an interesting time in the field,” Jack Ahern, a professor of landscape architecture at the University of Massachusetts Amherst, told Salon. “My colleague Joan Nassauer has found that it’s all about order and control. Even for those who understand that an all-turfgrass front yard is not the environmentally responsible thing to do, a suburban property comprised completely of native plants is too big a step for most people. It offends their sense of stewardship — it looks like weeds. But when these natural ecosystems are in clearly defined plantings, like islands of shrubs within the yard, people are more willing to accept it. This seems like a likely and promising direction for increasing sustainability.”

The trend is not just about a growing environmental awareness, but an increased desire for authenticity. It’s about tapping into, and celebrating, the local character of a place — gnarled branches and all — rather than steamrolling over it with some preconceived, cookie-cutter notion about what landscape design should be.

“Not too long ago, if you wanted to have a meadow on your fancy estate, it would have been frowned upon and misunderstood,” Travis Beck, director of horticulture at the Mt. Cuba Center and author of "Principles of Ecological Landscape Design," told Salon. “But now Westchester County in New York, the Berkshires, and other hoity-toity locales are tying up the most accomplished designers of wild meadows and other naturalized landscapes. As more of the world gets paved over, natural beauty becomes a more treasured resource.”

All of this amounts to one thing: a new type of status symbol. And perhaps a new, wilder home for your garden gnome.