Sean Spicer's ban on major news outlets is chilling — and is a big wet kiss to Trump's base, with an eye on 2020 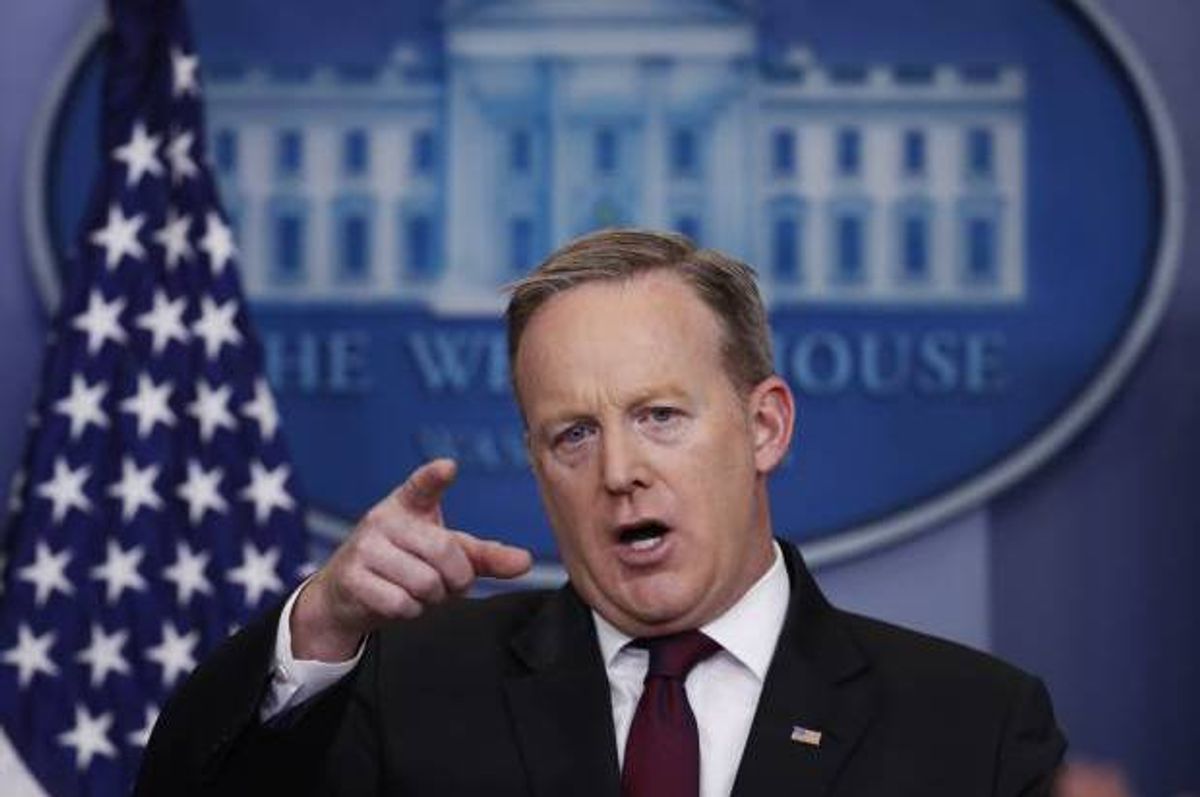 During the Obama years, one of the ongoing points of discussion was the White House’s “three-dimensional chess,” based on a scene from the original “Star Trek” in which Mr. Spock emphasizes his vast intelligence and complex strategic thinking by engaging in a futuristic chess game involving several interconnected game boards. In other words, with every political or policy move, we wondered about President Obama’s long game. Whether there was any regular strategy along these lines is still up for debate, but it seemed to make sense: Obama, a highly intelligent and pragmatic figure, working toward an endgame through a series of small, seemingly unrelated moves.

On the other hand, there’s President Donald Trump. It’s extremely unlikely that Trump is capable of thinking and planning on the same level as Obama and his team, even though there are quite a few smart political thinkers insisting that Trump, Steve Bannon, Reince Priebus and Stephen Miller have gamed out a strategy in which, perhaps, a series of distractions is scheduled in advance, paired with nefarious deeds committed behind the scenes. As the theory goes, while we’re all distracted by Trump’s ridiculous, unpresidential blurtings, Bannon and the rest are busily seizing the moment and getting away with murder.

It’s difficult to accept that there’s a method to Trump’s madness -- a petulant, erratic, undisciplined, mentally unstable man who’s really nothing more than another angry racist at the end of the bar who watches too much Fox News and won’t shut up about it. For a guy who insisted that the leaks about Mike Flynn “were real” but “the reporting was fake,” a plan appears contrary to his berserker style.

When we learned, however, that the New York Times, CNN, Politico, the Los Angeles Times and BuzzFaleed had all been barred from attending Friday’s press briefing, that suggested what could be a rudimentary yet potentially effective plan underway by the Trump White House. Go figure: It has little to do with making America great again, and everything to do with trying to set up Trump's re-election in 2020. Whether or not that simultaneously juvenile and chilling act of revenge is part of a long-term attack on press freedom is up for debate. But it's clearly meant as a smoochy late Valentine to Trump's most devoted supporters.

Since he first tweeted about Obama’s birth certificate (citing unnamed sources, by the way), Trump has been driven by two things: 1) being popular, and 2) saying whatever’s necessary to fluff his base, including and especially the neo-Nazi alt-right faction. Consequently, we’ve been assaulted by an nonstop tennis ball machine of insane bleats, nonsensical tweets and, all in all, more than enough horrendousness to make his loyalists extremely happy.

Incidentally, Trump's bubble of faithful disciples don’t see any of this as the rantings of a madman who fights invisible enemies. His rants and pronouncements are abundantly familiar to his fanbase because it’s exactly what they scream at their televisions every time they watch "The O’Reilly Factor" or “The Five.” It’s exactly what they rant about while listening to Limbaugh following 18 holes. And when Trump runs through his greatest hits, it’s not unlike hearing Skynyrd do “Freebird.”

Either Trump is highly attuned to his target demographic, with a sharply focused sense of what his people want to hear, or it’s all merely a happy, maniacal coincidence. Strategically, though, it really doesn’t matter whether it’s intentional. The process could very easily deliver a second term -- unless he’s driven from office before then. We shouldn’t count on that happening just yet.

As of right now, the Gallup daily tracking poll has Trump hovering between 40 and 45 percent approval. At this stage of the game, it’s a safe bet to collectively refer to this group of supporters as his base. He could easily drop another 10 points, or he could gain a little, depending on what blunders or accidental victories he Mr. Magoos his way into. Nevertheless, it’s safe to assume that around that proportion of registered voters like what happening. Despite how staggeringly abnormal all this is, there are still people who are ignorant enough to be suckered by it. It’s insane, but the numbers don’t lie.

So, by feeding the 40-percenters more of the gibberish and race-baiting -- and especially by continually bashing the “fake media,” otherwise known as the actual media -- Trump is keeping his base happy. Toss into the mix the disinformation campaign underway designed to make insignificant things look like major achievements -- the ludicrously low, subterranean expectations that have made it possible for ordinary moves by the White House to appear superhuman -- and it’s not difficult to slap some lipstick on the whining orange pig. Again, any time Trump manages to actually produce a few coherent words or begrudgingly chooses a qualified nominee for whatever, he's patted on the back and graded on the biggest curve in the history of curves. Phew! The way he nominated a qualified so-and-so for once without threatening to nuke Sweden -- amazing!

Cutting to the chase, it’s not that difficult to rise from a floor of 40 percent approval to 45.9 percent of the popular vote -- his total from November. Call it a form of moneyball. Winning is the only goal. This is easily achieved by keeping the 40 percent happy, while ignoring everyone else. From there, use Russian intelligence to hack the opposition while making up more tall tales about Trump’s (nonexistent) achievements, and it would be entirely possible for him to at least match his November total again. If we’re in a ground war, by the way, all bets are off. A war scenario could propel Trump even higher.

How do the Democrats and the progressive resistance fight back? The chief objective should be seizing the initiative -- seizing control of the aforementioned tennis-ball machine and turning it around against Trump, forcing him to spend all of his tweets and rave-outs responding rather than initiating news cycles. Concurrently, it wouldn’t hurt to continue peeling back the onion of the Russia allegations through deeper probes into what actually happened and the extent of the linkage between the hacking, the Trump campaign and the president's mysterious business contacts in Russia.

To repeat: we don’t know whether this strategy is an actual thing, but it makes perfect sense. Furthermore, fighting back as if it’s an actual thing probably can’t hurt -- the prescription will work regardless of what Trump’s up to.