With "When We Rise," ABC gives viewers a noble if uneven portrait of the ongoing struggle for LGBT rights

It's not a knockout, but ABC's serviceable miniseries bringing a vital part of history to the broadcast audience 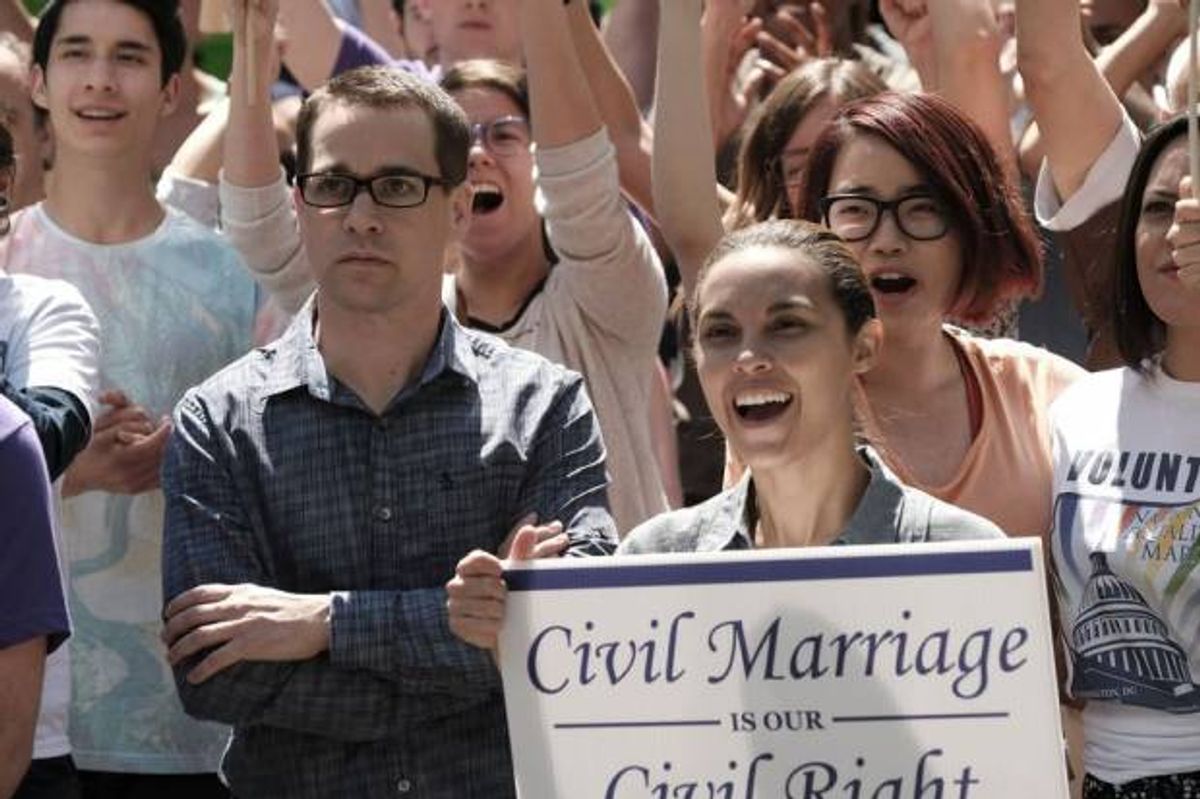 “When We Rise,” like most bold swings, is wide and inconsistent. But if there were ever a time for network television to answer legislative attacks on equality and human rights with a haymaker, it is now. Even if ABC’s eight-hour, four-night miniseries isn’t quite a knockout, its victory is in its very existence if not its execution.

“When We Rise” airs in two-hour installments on Monday, Wednesday, Thursday and Friday starting at 9 p.m. each night. Its message, conveyed through a patchwork of biographically inspired vignettes spanning from 1972 through 2013, rings with the piercing clarity of an alarm bell. Every generation is charged with confronting a conflict that tests its moral mettle, the main character points out as the first part begins. The necessity to fight for and defend our rights is perennial.

“When We Rise” was in progress long before Donald Trump was in a position to reverse protections on transgender students, as he did Wednesday via executive order, or threaten to roll back enforcements of LGBTQ rights in the workplace. That makes the miniseries’ scheduling less than a week after the former occurred a depressing coincidence, one that might just work in its favor.

Although the limited series has made a comeback (albeit redefined) on cable television, the true miniseries — that is, multi-episode one-shot stories with a definitive ending — fell out of favor on broadcast television years ago. Networks and studios get a better financial return on content that can generate aftermarket revenue.

With “When We Rise,” ABC is airing scripted content that serves the interest of the audience, something of an outdated concept these days among companies that broadcast on publicly owned airwaves. It’s tough to recall the last time a network carved out nearly a week’s worth of prime-time slots for a civics and history lesson.

No doubt the imperfect “When We Rise” earned such space due in part to its pedigree. Created by Dustin Lance Black, who wrote the Oscar-winning screenplay for 2008’s “Milk,” the miniseries reaches for the sweep and heft of a theatrical effort, although an excess of earnestness prevents it from fully taking off.

It isn’t for lack of trying. “Your generation is asleep,” Guy Pearce’s Cleve Jones tells a young man interviewing him -- in 2006, according to the series. But he could have been saying it in 2016.

Jones’ inspiring story serves as the narrative backbone of “When We Rise.” Movingly portrayed by Emile Hirsch in “Milk,” in ABC’s production Jones is played by Austin P. McKenzie as a young man and, later in life, Pearce.

Jones’ LGBTQ activism stretches over 45 years, which makes his biography a sound vehicle that takes people through significant watermarks in the gay rights movement. His profile also is the highest among all the San Francisco activists portrayed in the series: “When We Rise” also follows the social justice journeys of Roma Guy (with Emily Skeggs playing the young Roma, and Mary-Louise Parker assuming the role later) and African-American activist Ken Jones (Jonathan Majors and Michael Kenneth Williams).

The guest star support throughout the series includes Rosie O’Donnell as lesbian rights trailblazer Del Martin; Whoopi Goldberg playing Pat Norman, the first openly gay person hired by the San Francisco Department of Public Health; Denis O’Hare as Democrat Jim Foster, a founder of the first LGBT political club in San Francisco; and T.R. Knight as Chad Griffin, the political strategist instrumental in spearheading advocacy efforts that led to the Supreme Court’s ruling striking down Proposition 8 and the Defense of Marriage Act in June of 2013.

There’s a power in granting famous names and faces to the stories of struggle the average viewer likely has never heard of. But the history of the LGBTQ civil rights movements has many moving parts to service, something the series doesn’t do as elegantly as one may desire. This is especially true of the miniseries’ transition from its younger versions of characters to their older selves, which is almost concussive in its abruptness; the hand-off from Majors to Williams is probably the smoothest.

“Part I” and “Part II” of “When We Rise” have a vitality about them that flags in later episodes, though to be fair, they also benefit from a scrappier set of lesser-known personal histories. The two-hour opener, directed by Gus Van Sant, begins in 1972 and introduces Cleve, Roma and Ken as they’re coming into their identities as well as their activism. Cleve is out by the time he’s 18, but struggles to survive in the Bay Area.

Roma moves to San Francisco seeking a place in the feminist movement and discovers the rancorous split existing between rank-and-file heterosexual women’s rights leaders and lesbian organizers. Ken is serving in the Navy and attempts to continue his career when he’s transferred to a post in the city, but cannot stand by as he witnesses fellow gay men being terrorized by the police. Soon they find each other, and a support system, albeit one often at odds with itself.

Like every nascent social justice moment, the gay rights movement clashed over choosing its alliances and boundaries. When the story depicts the give-and-take that yields solidarity between disparate activist factions in the gay and lesbian communities — when they realize they must come together to survive and prevail — the miniseries’ poignancy is undeniable.

But in the Dee Rees-directed “Part II,” censorious chatter begins to get in the way of emotionally resonant aspects of this history, further diluted by spending time on the romantic lives of the main players.

Here is where “When We Rise” begins to meander.

The miniseries does a serviceable job of hitting major historical markers, including the 1978 assassination of Harvey Milk and the battle to defeat legislation that would ban gays, lesbians and their supporters from working in public schools; the explosion of the AIDS crisis in 1981 and the government’s failure to act through the ’90s; and the fight to overturn Proposition 8 and the Defense of Marriage Act, which dominates the miniseries’ final hours.

“When We Rise” also glides through Bill Clinton’s damaging implementation of Don’t Ask, Don’t Tell in 1994 and the Defense of Marriage Act in 1996, but tightens its focus on Cleve’s struggle for relevance in 1997 and Roma’s quest for household stability as she raises a rebellious teenager with her partner Diane (Rachel Griffiths).

Cleve’s championing of the AIDS Memorial Quilt is an able through line that joins “Part III,” which was directed by Thomas Schlamme, with the series’ final chapter, “Part IV.” And while Ken’s story receives adequate development during Major’s time onscreen, it feels disjointed by the time Williams takes over the role.

Some of the reason for that may be due to history itself, and Williams’ incredible talent compensates for the script’s limitations. Ivory Aquino’s thoughtful portrayal of transgender activist Cecelia Chung camouflages some the flaws in this subplot. Paired with Williams, the depiction of their resilient friendship is one of the most touching facets of “When We Rise.”

But it takes until midway through the second night for the story to touch upon the bigotry black gays and lesbians face from their own community.  Even beyond that, Jones’ account feels tangential to the main story driving “When We Rise.” If the writers are seeking to make a statement of the ways that LGBTQ African-Americans have been made to feel like outsiders two times over, perhaps they should have been more explicit.

Personalizing this history helps connect “When We Rise” to the audience, and showing these men and women living, loving and sustaining crushing acts of violence is crucial to imparting the urgency of its message. But although each episode’s interpersonal dramas add up to a potent and moving final act, the road to get there feels overly long and too thinly paved.

It is nevertheless one that compels a person to walk it if only to illustrate the impact a unified people can have on bending the arc of the moral universe back toward justice. To make sure we get the point, Black (who wrote the opening and final installments) has Pearce’s Cleve ask this of the young man who is interviewing him: “What’s it like to be part of the first generation in this country that has no purpose? And what are you going to do about it?”