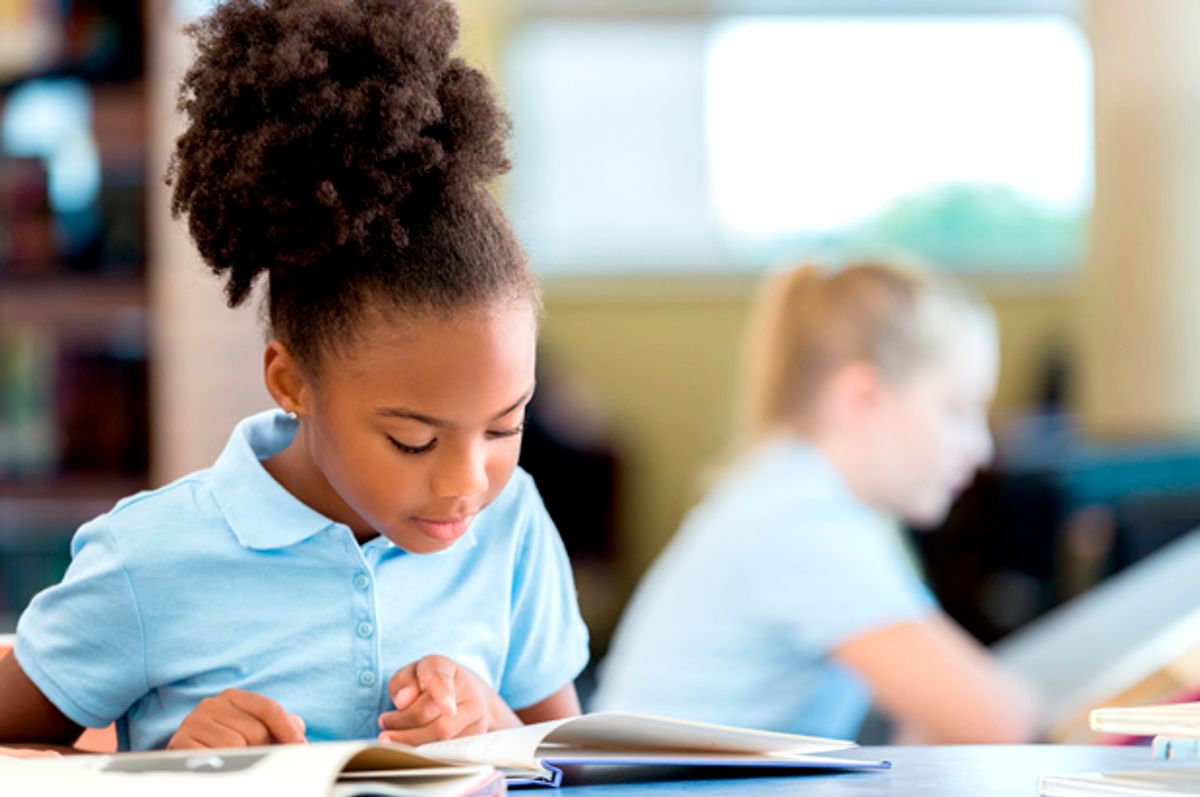 Kaya Thomas has always been a voracious reader. But despite her growing library and bigger imagination, she often couldn’t see herself in the characters of the books she read.

“Being a black woman, what I had experienced growing up was that a lot of books I was reading weren’t representative of me,” Thomas told Salon. “I wished there was a place where I could find books with characters that look like me or are similar to me.”

In 2014, the Dartmouth College student created a mobile app to help young readers access books by and about people of color. We Read Too is designed as a discovery platform for children and young adult fiction readers, who can search for a specific title or receive suggestions for books. The app has a directory of 650 titles — with 1,000 expected by the end of the year — and has been downloaded from iTunes approximately 15,500 times.

Thomas decided to develop her app around younger readers because while age-appropriate literature often teaches lessons and builds skills, it can also cement identity. When children don’t grow up reading about characters like themselves, they might start to question whether their experiences in the world are valuable.

“I think it’s so important for young people to be exposed to stories that are representative so they know that they’re not invisible,” she said. “[We Read Too is] also for white kids and teens . . . it’s important for all of us to get various perspectives.”

Finding those perspectives can be a challenge. Authors and illustrators of color accounted for 12 percent of all children’s books published in 2016, according to a study by the Cooperative Children's Book Center at the University of Wisconsin. CCBC has tracked the number of books authored or illustrated by black writers and artists since 1985 and has accounted for Asian, Native American and Latino creators and characters since 1994. Over the past 22 years, the number of books created by black people has only increased 3 percent.

“What the low numbers for multicultural literature mean is that publishing for children and teens has a long way to go before reflecting the rich diversity of perspectives and experiences within and across race and culture,” CCBC’s website states.

While parenting blogs, book reviewers and mainstream media websites will often publish lists of minority authors, We Read Too’s Thomas is among a handful of entrepreneurs who are using technology and social media to expand the reach of those authors of color. The goal is to a showcase books by and for people of color without forcing readers to dig deep to find them.

“Even when I was doing the research to create the directory, a lot of the things that were out there about diverse literature were in little snippets,” Thomas said. “There hasn’t been necessarily one central location where you can find books by black or Latin American authors.”

Other personalized, direct-to-door services have popped up to meet the literary needs of black children. Just Like Me! offers a monthly book box subscription that sends two to three “carefully selected and researched” books, with selections tailored to fit infants through 12-year-olds.

While looking for a book subscription box for her young niece, academic librarian Jamillah Gabriel thought she would like a subscription service dedicated to adults. In November 2016, Gabriel launched Call Number, a library-inspired monthly book subscription box that packages a book by a black author alongside “bookish” items that fit a theme. Call Number now has several hundred subscribers across the country and internationally.

Call Number isn't alone; Noir Reads ships two to three books by black authors per month to subscribers and offers access to a private online book club, while My Lit Box sends a new release novel by a writer of color every month, plus related goods.

Black authors and authors of color face the same (and perhaps elevated) challenges as any writer without backing from a major publishing house: it’s hard to get your voice heard. Add to that a decline in bookstores and an even smaller amount of black-owned or black-focused bookstores, and finding representative work can be like searching for a needle in a haystack.

“As a consumer it’s pretty difficult to find out who writers of color are; you have to really do your research to find those people," Gabriel told Salon. "I think publishers really have a great responsibility to push writers of color out and they’re not doing that.”

Thomas receives hundreds of requests from authors who want to be listed on We Read Too, many of whom self-publish or don’t have a way to market. Exposure is particularly hard for “authors who don’t have a big publishing house behind them or have a literary agent or publish on a small press,” she said.

Other avid readers have taken to social media to promote good reads, like the Booktuber YouTube channel Brown Girl Reading. Brooklyn-based Well-Read Black Girl is an online community – with more than 7,500 Twitter followers and over 14,000 followers on Instagram – as well as a real-life book club “dedicated to the phenomenal Black women on our bookshelves.”

Call Number’s Gabriel also advocates for building community; she plans to eventually align her business with non-profits that support libraries.

“[Call Number is] still new and growing but it’s been great, the feedback I get both subscribers and non subscribers,” Gabriel said. “It’s been nice to see that other people have the same interest and recognize the value.”

We Read Too’s Thomas eventually wants to expand her app to highlight books for adults. Now a senior at Dartmouth and an iOS developer, she’s surprised at how much her love of literature has grown.

“It’s a passion project of mine. When I created this app I didn’t think anyone was going to use it. I didn’t really think thousands and thousands of people would be interested in it,” she said. “I’m really grateful. I just want people to be exposed to these stories.”