Shattering the false dichotomy: Progressives must mobilize and persuade — and get better at each 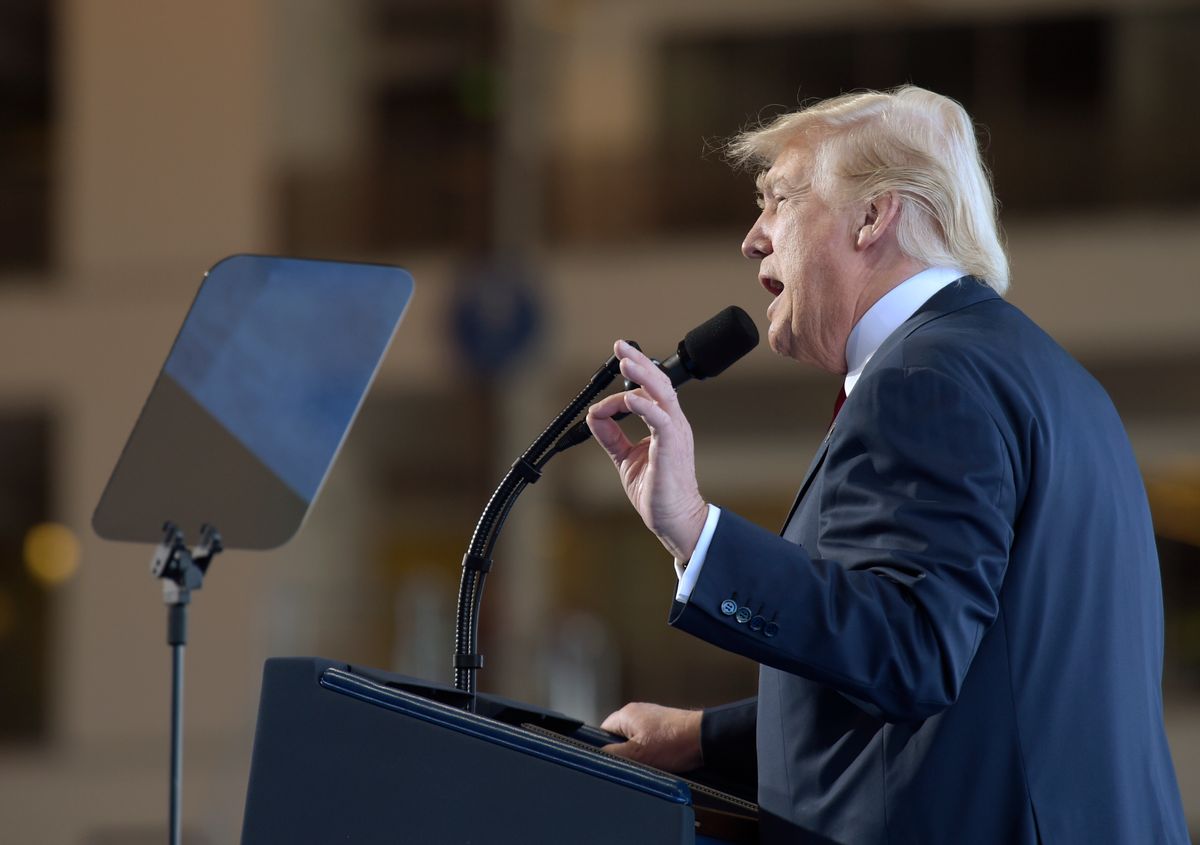 President Donald Trump speaks at the Boeing South Carolina facility in North Charleston, S.C., Friday, Feb. 17, 2017, where he went to see the Boeing 787 Dreamliner. Trump visited the plant before heading to his Mar-a-Lago estate in Palm Beach, Fla. for the weekend. (AP Photo/Susan Walsh) (AP)
--

The 2016 election is more than three months past, and we live each day with its apocalyptic consequences. We need to fight President Donald Trump and what he stands for on multiple fronts. We need to fight the Muslim ban, the global gag order, the border wall with Mexico, rollbacks of consumer protections and health care, and a host of ethical issues. We must link all these fights to a political narrative aimed at restoring progressive power in this fall’s elections in Virginia and New Jersey, and taking back statehouses and Congress in 2018.

But as we do that, we’re still debating what hit us last November. Reliable data is beginning to come in, and as always, there is a cottage industry of consultants eager to interpret it and chart the way forward (often without reference to how wrongheaded much of their advice and predictions proved to be in the last cycle). As the leader of a group of progressive donors, I have sat in at least a dozen election post-mortem discussions and read a stack of reports and PowerPoint decks. I’ve learned a lot.

I don’t pretend to have all the answers, and am distrustful of those who think they do, since humility is demanded of us after a stunning upset almost no one predicted. If your diagnosis is completely in sync with whatever you devoutly believed the day before the election, or translates into a single magic bullet — or in the case of looking backward, a single culprit — you should think again.

The way I look at it, at the presidential level the 2016 election was like the classic Agatha Christie murder mystery (I won’t say which one and spoil the novel for those who haven’t read it) in which there are a dozen suspects — in this case, James Comey, misogyny, over-reliance on data and ads and underinvestment in the field, lack of an economic message, a flawed candidate, voter suppression laws, Russian interference, “fake news” and a host of other factors. In the end, each of them turns out to have taken a turn — stabbing, poisoning, shooting, bludgeoning and strangling the victim.

When you win the popular vote convincingly but lose an election by about 60,000 votes in three close states, this is almost certainly true. (My own favorite culprit is that you can draw a clear forensic line from the 2010 election of right-wing Republican governors in Wisconsin and Michigan and their successful efforts to weaken the power of labor in their states to the razor-thin margins that shifted those states into the Trump column in 2016.)

There is one emerging conclusion that could very well become the dominant narrative about the 2016 election, and critical for elections to come, that I believe deserves much more analysis and context before it becomes set into stone, because the consequences are very high. It is that mobilization — by which is meant turning out voters in the progressive “base,” such as communities of color, women and millennials — has fallen short. We must shift to persuasion to start winning again; that is, talking with voters who don’t agree with us, and who may have voted for Trump or third-party candidates.

It’s not that I think persuasion is unnecessary or mobilization is sufficient — I don’t. But if we are not clear by what we mean by each, and if we don’t avoid creating a false dichotomy between the two, the progressive base will fracture and we’ll move backwards, not forward.

Here’s what I mean. A mobilization strategy, which Hillary Clinton’s campaign largely seems to have followed, building on the two general election successes of Barack Obama, emphasizes the “New American Majority” of blacks, Latinos and Asians, along with young voters and a large cohort of unmarried women who, when they vote, tend to vote for progressive candidates. It requires investments in voter registration, because many in those communities are not yet on the voting rolls. If the registration gap could be narrowed or eliminated, the thinking goes, you can lock in a progressive majority for some time. It requires investments in turnout, knocking on doors, motivating voters, and getting them to the polls. But given the result last November, we now wonder, of course, whether the Obama strategy requires Barack Obama, or someone like him, who can inspire and galvanize.

Too often, a mobilization strategy presumes the allegiance and even enthusiasm of a voting group. But no one likes to be taken for granted. When candidates and parties speak to the issues most important to communities — police violence, or immigration reform, or childcare, or student debt — passion and turnout rise. The same appears true with some of the disaffected voters Trump turned out, who saw a candidate voicing their grievances with the elites of both political parties.

Further, to argue that mobilization is insufficient to win presumes that it has been fully backed with the necessary resources, but that’s just not the case. Some key electoral field efforts in the past cycle moved more money to communities of color than in the past, but as someone who tried to raise money for black and Latino civic engagement, I know that money for those efforts came, as it almost always does, too little and too late, and in any case, is rarely sustained between elections, perpetuating a boom and bust cycle that saps the fight to build permanent political power.

Persuasion seems like common sense — it’s what elections are all about, isn’t it? But it, too, is contested ground. Many in the communities of the New American Majority and on the left of the Democratic Party fear, from the experience of the post-Reagan/Bill Clinton era, that it’s a synonym for triangulation — for moving to the center, and muting or abandoning key progressive positions. After years of chronic underinvestment in low-income women and men of color, the progressive “discovery” of white working class men in the Rust Belt feels galling to many, particularly when a majority of college-educated white men and women, who are hardly marginalized, contributed heavily to Trump’s Electoral College victory. For black voters whose communities are still feeling the ravages of a drug epidemic that was “treated” (by Democrats no less than Republicans) by prison-building, the sudden empathy with largely white communities disrupted by opioid abuse seems, well, it seems like racism.

Moreover, while progressives have invested much in mobilization strategies for those who are with us, so far we know too little about what works to persuade those who are not. Hundreds of millions of dollars poured into 30-second ads that pollute the discourse and line the pockets of consultants and television stations are not the answer. We have to step up investment in smart and targeted digital strategies, where we seem to have been bested by the Trump campaign last fall, and return to good old fashioned, year-in, year-out, face-to-face organizing in communities. Because listening, and the relationships built from it, matter. Powerfully.

A true New American Majority must have room for those left out of the economy no matter their race or geography. The pain of an unemployed coal miner, steelworker or other casualties of globalization is no less real than that of a struggling fast food worker or caregiver. It makes no excuses for the racism and misogyny fueling a too-large bloc of Trump’s voters — or even for those who swallowed their disgust at racism and misogyny to vote for him anyway — to say that a shared interest in good jobs, a strong social safety net and functioning roads and bridges can forge an electoral coalition that will be powerful. It’s an arithmetic issue, to be sure, but more fundamentally, it’s a moral issue. A progressive vision has to be one that most can see themselves in.

It’s not that we don’t know how to do this, or how to talk about this. Organizing groups like Working America, PICO and People’s Action know how to have deep and ongoing conversations with white working class voters and most importantly, how to listen – as do labor leaders like Mary Kay Henry of SEIU and such thought leaders and activists as Van Jones and Demos President Heather McGhee.

Such winning progressive candidates in purple states around the country as Senators Al Franken in Minnesota, Tammy Baldwin in Wisconsin and Sherrod Brown in Ohio, not to mention the new Democratic governor of North Carolina, Roy Cooper, have shown that strong adherence to core progressive values on human rights and justice issues can and must be coupled with an inclusive economic vision.

Donald Trump peeled off voters in key states who felt betrayed by the elites of both parties. Those voters will be up for grabs when they realize — as we must drive home to them — that they were conned. The extremist and corrupt government that Trump is installing, from his family on down, will line its own pockets and dole out more hardship for working people. As that becomes clear, millions could turn away from politics completely — or be ready to listen to a candidate or party really standing up for them.

No less than skeptical Rust Belt white men, voters of color and women and young people must be listened to and delivered to before they can be mobilized, and campaigns have to start treating them as agents, not targets. The persuasion of Rust Belt voters in economic distress must keep faith with progressive human rights values yet lead with credible remedies for economic pain, delivered by authentic messengers.

In the end, we must both persuade and mobilize. We have fallen short in both. Starting now, we have to do better. If we don’t, we’ll be embroiled in a potentially toxic debate that could do as much harm to progressives as any right-wing Republican.