Trump takes the "shackles" off: Mass deportations begin as the world looks on in outrage

ICE agents and other federal cops are having "fun" again, as Trump sets them free to deport whoever they want 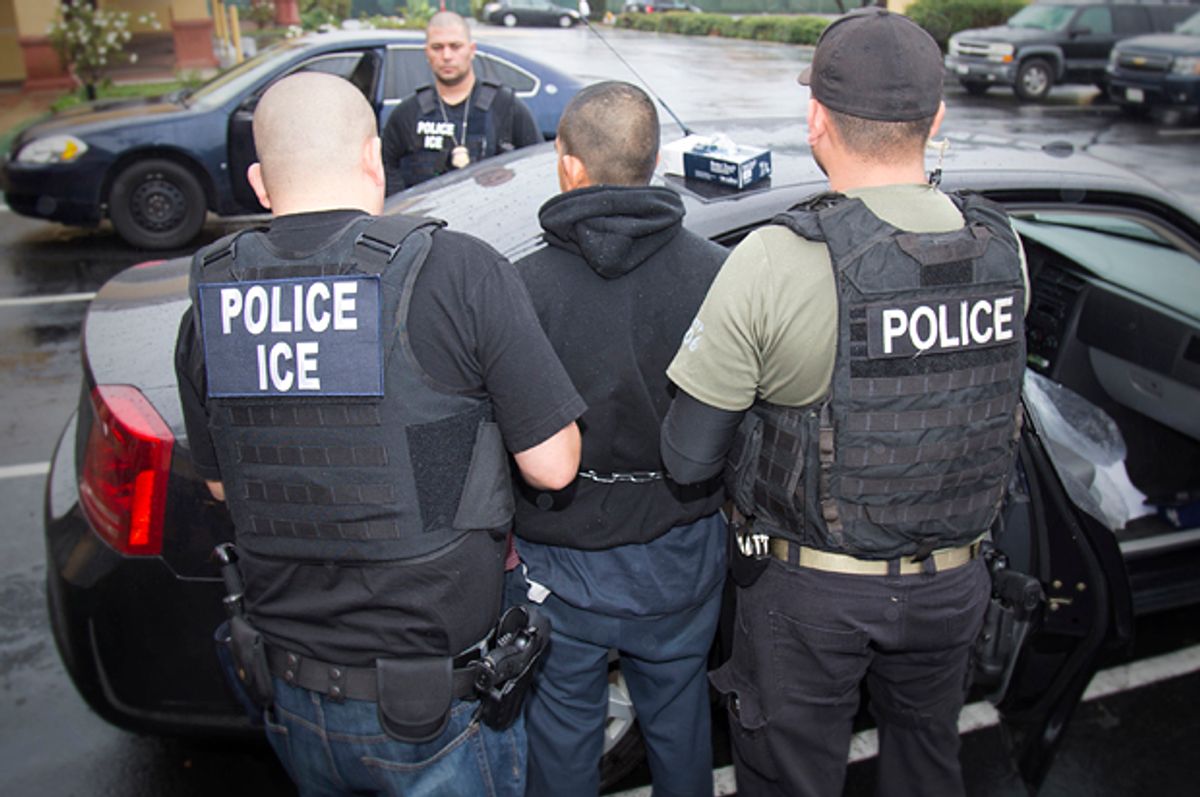 At Sunday night's Oscars ceremony, actor Gael García Bernal told the worldwide audience, "As a Mexican, as a Latin American, as a migrant worker, as a human being, I am against any form of wall that wants to separate us." Iranian-American engineer and entrepreneur Anousheh Ansari (the first Iranian to go into space!) read a statement from director Asghar Farhadi, whose film "The Salesman" won the foreign-language Oscar. Farhadi, who decided not to attend the event due to the Trump administration's travel ban, said, in part, in his statement:

My absence is out of respect for the people of my country and those of other six nations whom have been disrespected by the inhuman law that bans entry of immigrants to the U.S. Dividing the world into the “us" and "our enemies" categories creates fear. A deceitful justification for aggression and war. These wars prevent democracy and human rights in countries which have themselves been victims of aggression.

These comments from a Mexican and an Iranian (Farhadi released to the press an even longer statement) are poignant in themselves. And they also illustrate that the Trump administration's policy concerning undocumented workers and his policy banning travelers, immigrants and refugees from certain countries are actually the same: He is on a crusade to deport and ban a variety of foreigners of different statuses under various premises, for the supposed purpose of keeping what he calls "bad dudes" out of the United States.

We know that a serious concern about the threat of terrorism is not the motivation for the travel ban. Echoing George W. Bush administration's treatment of intelligence analyses that showed little evidence that Saddam Hussein had reconstituted his nuclear program, the Trump administration has apparently rejected a Department of Homeland Security report indicating that “country of citizenship is unlikely to be a reliable indicator of potential terrorist activity.” Claiming that the report was politically motivated and poorly researched, a White House spokesman said, “The president asked for an intelligence assessment. This is not the intelligence assessment the president asked for." That's not how this works.

At last week's Conservative Political Action Conference gathering, Trump gave a speech making it clear that he sees immigration of all kinds in the same light. He wove the various strands together using very similar language:

[L]et me state this as clearly as I can, we are going to keep radical Islamic terrorists the hell out of our country. We will not be deterred from this course, and in a matter of days, we will be taking brand-new action to protect our people and keep America safe, you will see the action. . . .

As we speak today, immigration officers are finding the gang members, the drug dealers and the criminal aliens and throwing them the hell out of our country. And we will not let them back in. They're not coming back in, folks. They do; they're going to have bigger problems than they ever dreamt of.

The merging of these separate strands of immigration policy beyond Trump's rhetoric and into practice is beginning to become clear as reports of Customs and Border Patrol as well as Immigration and Customs Enforcement agents implemening draconian new policies all over the country have started filtering into the media. The early days of the Muslim ban were chaotic and at times abusive. But that could have been chalked up to bad communication and poor implementation. What we're now seeing is much more systematic.

A report in The New York Times on Friday revealed that government agents are thrilled and having "fun" in their jobs since, as press secretary Sean Spicer said, Trump has "taken the shackles off." Officers told reporters how ecstatic they were to be free to deport any undocumented immigrant they come across:

[F]or those with ICE badges, perhaps the biggest change was the erasing of the Obama administration’s hierarchy of priorities, which forced agents to concentrate on deporting gang members and other violent and serious criminals, and mostly leave everyone else alone.

This clearly indicates that those called "bad dudes" by Trump and his Immigration and Customs Enforcement officers are all undocumented immigrants, and the Trump team wants to deport every one of them. Horror stories are multiplying like the one of agents arresting a woman seeking shelter from an abusive boyfriend, and another tale of officials detaining a woman with no criminal history who was in the hospital seeking treatment for a brain tumor. Incidents have been reported of Customs and Border Patrol agents demanding that all passengers on a domestic flight provide IDs when disembarking the airplane, which is highly unusual.

Trump's new travel ban is scheduled to be released sometime in the next week, but it's hard to imagine that it's going to be much of an improvement over what's already been happening. We hear stories daily of inept customs agents harassing innocent people, like a visiting scholar in Houston, who was mistakenly held and nearly sent back to France, or even someone as obviously American as Muhammad Ali Jr., a son of the legendary boxer who was reportedly asked, "Where did you get that name?"

The number of errors in both law and common sense among customs and border officials since Trump first imposed his ban does not bode well for its orderly or professional implementation. Now, according to Foreign Policy, there's a desperate need for thousands more agents and a difficulty in finding people who can pass polygraph tests and background checks — so the administration wants to drop those requirements. What could possibly go wrong?

Donald Trump ran on an anti-immigrant platform and his voters consider that the most important issue facing the nation. He's moving fast to fulfill those promises. But he also ran as the "law and order" candidate and his CPAC speech made it very clear that there's a second phase to his program:

I'm also working with the Department of Justice to being reducing violent crime. I mean, can you believe what's happening in Chicago as an example. . . . We will support the incredible men and women of law enforcement.

He's not being coy. African-Americans and Latinos living in urban neighborhoods can be sure that he plans to "take off the shackles" there, too.

At his recent rally in Melbourne, Florida, Trump said, "Basically people that wear uniforms like us." He's right. All through the government, career professionals are appalled by his approach to immigration, along with numerous other policies. But the federal police agencies are over the moon about Donald Trump. And that is very disturbing.