You will remember this: Oscars 2017

A night of politics, drama and surrealism 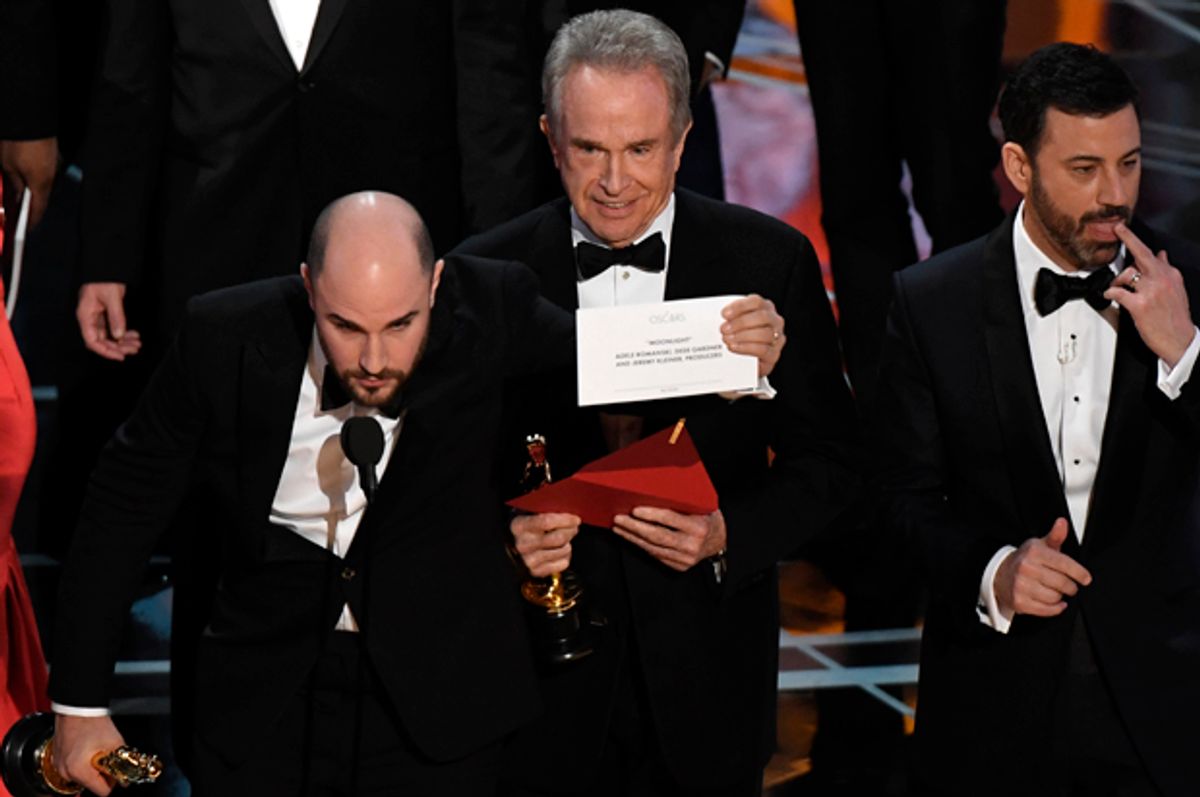 It’s a cool Los Angeles evening. You’re on a tour bus. The bus stops in front of the Hollywood Walk of Fame. You're led into a building — a stop in the tour, you think (we think) — and once in the building, into a dark hallway, where you wait to see an attraction of some sort. A door is opened.

You walk through the door and see hundreds of faces you recognize: celebrities, all in tuxedos and gowns. It’s like a wax museum come to life (as Jimmy Kimmel has just said, unbeknownst to you), only you are the show. You are the show and everyone you interact with becomes part of the show. Kiss Halle Berry’s hand. Take Jennifer Aniston’s sunglasses. You’re engaged? Who’s your favorite actor? (Denzel Washington.) Denzel will perform the ceremony. Denzel: “I now pronounce you husband and wife.”

Afterward, you’ll reflect on how it all felt like a dream, being there, at the Oscars. . . .

We will all reflect on how it felt like a dream — how it all feels like a dream. Or maybe a dream isn’t quite right. The narratives are too clear. There are heroes and villains and nothing is ephemeral. No, last night’s Oscars felt like virtual reality — like a season finale in a very long, ongoing season full of many season finales, really something betwixt and between it all.

The moment, of course, that made last night’s Oscars telecast the mediated surrealism that it was came in the ending: Warren Beatty opened the night’s most polarizing envelope, the one that would decide the latest bout of Good versus Bad. He began to announce “The Academy Award. . .” then looked down at the card he was holding, making it seem as though he was pausing to create suspense. He continued: “For best picture. . .” And then he showed the card to Faye Dunaway, who announced that “La La Land” had won. The cast and crew went up to accept the award, their seventh of the night (they thought), and then in the midst of their acceptance speeches, they were notified that they had not in fact won.

“’Moonlight,’ you guys won best picture,” “La La Land” producer Jordan Horowitz said, assuring everyone, “This is not a joke.”

The flashbacks were immediate and obvious — to the presidential election, to the Super Bowl. A certain subset of liberal Americans, heavily represented in the media and very active on Twitter, was ready to take defeat at the hands of evil — or just whiteness — as the past few months’ takeaway. Instead, the trend that emerged was the realization of the unthinkable, the cementing of the adage “It ain’t over till it’s over.” Perhaps this week will see an uptick in lottery ticket sales. Perhaps there will be a rampant springing of Cotard’s delusion; we will overcompensate by thinking nothing can die. Or perhaps we will collectively continue to grow more skeptical, convinced everything is fake news.

And was it real? Did Kimmel, ever the prankster, purposefully give Beatty the wrong envelope? Did Faye Dunaway jump the gun? Were the Russians involved? What about the bus of tourists? Did Gary know that he was about to walk into the front of the Dolby Theatre and be pretend married to his wife by Denzel Washington?

That these questions are being asked is symptomatic of the way Silicon Valley has emulsified Washington and Hollywood. The political has taken on the spirit of showbiz. And showbiz has taken on the weight of politics. Each has bled through our phones into every crevice of life and each other. Every acceptance speech last night was political, whether the given speaker acknowledged the American drama that is taking place or declined to do so. And the best picture race was the political battle of the night.

Obviously, the consequences of a best picture race are less significant than those of a presidential race. “Moonlight” winning an Oscar may inspire and bring hope to many minority and gay people, but it won’t save Obamacare or prevent travel bans. The sensationalism of the spectacle, though, elevated the perception of the result. It all feels of the same absurdist script.