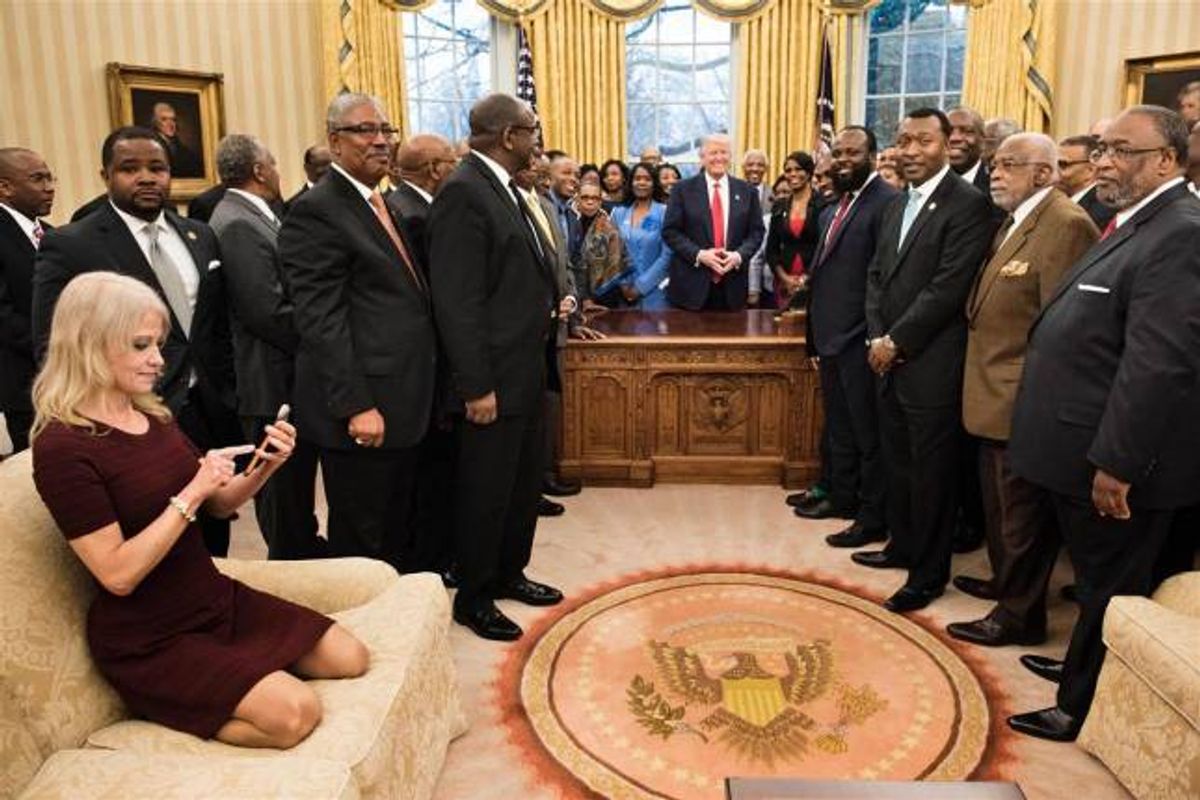 President Donald Trump summoned dozens of leaders of historically black colleges and universities to the Oval Office on Monday for a meet and greet event prior to a “listening session” with Vice President Mike Pence and Education Secretary Betsy DeVos. But while controversy has swirled around the placement of White House counselor Kellyanne Conway's feet in a photo op, the real outrage is how the Trump administration has managed to bungle its outreach to black leaders during the final days of Black History Month.

Predictable outrage took over Twitter on Monday night when an image was released of Conway perched, her feet tucked beneath her, on a couch in the Oval Office as President Trump stood behind his desk with 64 presidents of historically black colleges and universities gathered around him was released. Presumably Conway was on the sofa to try to get a good angle for snapping a photo. (Where her shoes were was unclear.)

While debates about decorum can be fun and even instructive about modern partisan hypocrisy, in this instance it serves as a distraction from what was sold by the White House as historic outreach to the base of the Democratic Party. But this event turned out to be another poorly managed photo opportunity devoid of meaningful substance except for a whitewashing of the legacy of historically black colleges and universities in this country.

“I’m still processing that entire experience,” Dillard President Walter M. Kimbrough wrote about being in the Oval Office in a post on Medium. Kimbrough explained that he and the other leaders had prepared remarks on the state of historically black colleges and universities today to present to the administration, but their agenda “blew up” when a photo op with the president "was proposed at the last minute."

“[N]eedless to say that threw the day off and there was very little listening to HBCU presidents today — we were only given about 2 minutes each, and that was cut to one minute, so only about 7 of maybe 15 or so speakers were given an opportunity today,” Kimbrough wrote.

The president and CEO of the United Negro College Fund, Michael Lomax, said in a statement that the school leaders had been looking forward to “meaningful actions” and “additional resources and investments.”

As an “aspirational funding goal,” the leaders of historically black colleges and universities recently asked the White House for 5 percent of total federal grant, internship and co-op funding for higher education and 10 percent of federal contract funding for higher education. Instead, Trump is expected to sign an order on Tuesday that will seek to increase only the private sector’s role in supporting historically black colleges and universities, while having the college presidents serve as strategic partners to the president’s “urban agenda,” a senior White House official told Politico.

Trump has said he’ll help such schools in his New Deal for Black America. The administration has hinted about such an executive order during his Black History Month commemorative meeting and "listening session" with pro-Trump black political commentators.

“I also want to honor and support the achievement of historically black colleges and universities throughout our nation,” Trump said in his Sunday weekly address. “They do a fantastic job. They are not given the credit that they deserve, and they are going to start getting that credit,” he added.

While historically black colleges and universities represent only 3 percent of all U.S. colleges, they turn out 17 percent of African-Americans bachelor degree graduates and 24 percent of all black scientists and engineers, according to NBC News.

Omarosa Manigault, who was named director of communications for the Office of the Public Liaison last month, will be leading the charge for the drafting of the executive order. Under her guidance, the White House has worked for weeks on this drafting with the help of the CEO of the Thurgood Marshall College Fund, Johnny C. Taylor Jr., according to Politico.

The executive order is expected to follow up on the United Negro College Fund's request that Trump move the White House Initiative on Historically Black Colleges and Universities, which has been part of the Department of Education, to the White House to be led by a person “who reports to a senior advisor to the president,” according to The Washington Post. (Since the launch of the initiative by President Jimmy Carter, every single president has signed an executive order extending and altering it, while maintaining its basic principles.)

While this move may go forward, some education advocates are concerned there won't be much federal money for the historically black institutions of higher learning.

Press Secretary Sean Spicer said on Monday that such a move would build a “direct pipeline to the president” and would make sure that federal agencies are spending money on historically black colleges and universities like they’re supposed to. Trump has argued the initiative has “lost track" under the administration of President Barack Obama "because they didn’t have the full force of the" president behind these historically black institutions of higher learning.

BuzzFeed reported that Paris Dennard, a pro-Trump political commentator who works on strategic communications for the Thurgood Marshall College Fund, told the president earlier this month that he could enshrine his legacy with black America if he acted on helping out the struggling schools — given what he described as President Obama's mixed legacy on historically black universities.

On Monday the Trump staff linked on the White House website to a McClatchy article titled "President Trump seeks to Outdo Obama in Backing Black Colleges."

And perhaps feeling upended by the president's surprise meeting with the presidents of historically black colleges and universities ahead of her own scheduled visit with the leaders, newly confirmed Education Secretary Betsy DeVos issued a tone-deaf statement that completely whitewashed the legacy of the historical institutions.

“They are living proof that when more options are provided to students, they are afforded greater access and great quality,” DeVos wrote in a statement shoehorning into it her ideology about starving public education through state-funded vouchers. “Their success has shown that more options help students flourish.”

But as Brendan Nyhan, a professor of political science at Dartmouth University, pointed out on Twitter, DeVos’s statement directly contradicted information readily available on her department’s website about the legacy of segregation in higher education — not to mention completely ignored the racism that forced African-Americans to establish their own institutions of higher learning: