Paul Krugman: Keep up the outrage — our democracy depends on it

Protest is an essential weapon in the war to save democracy 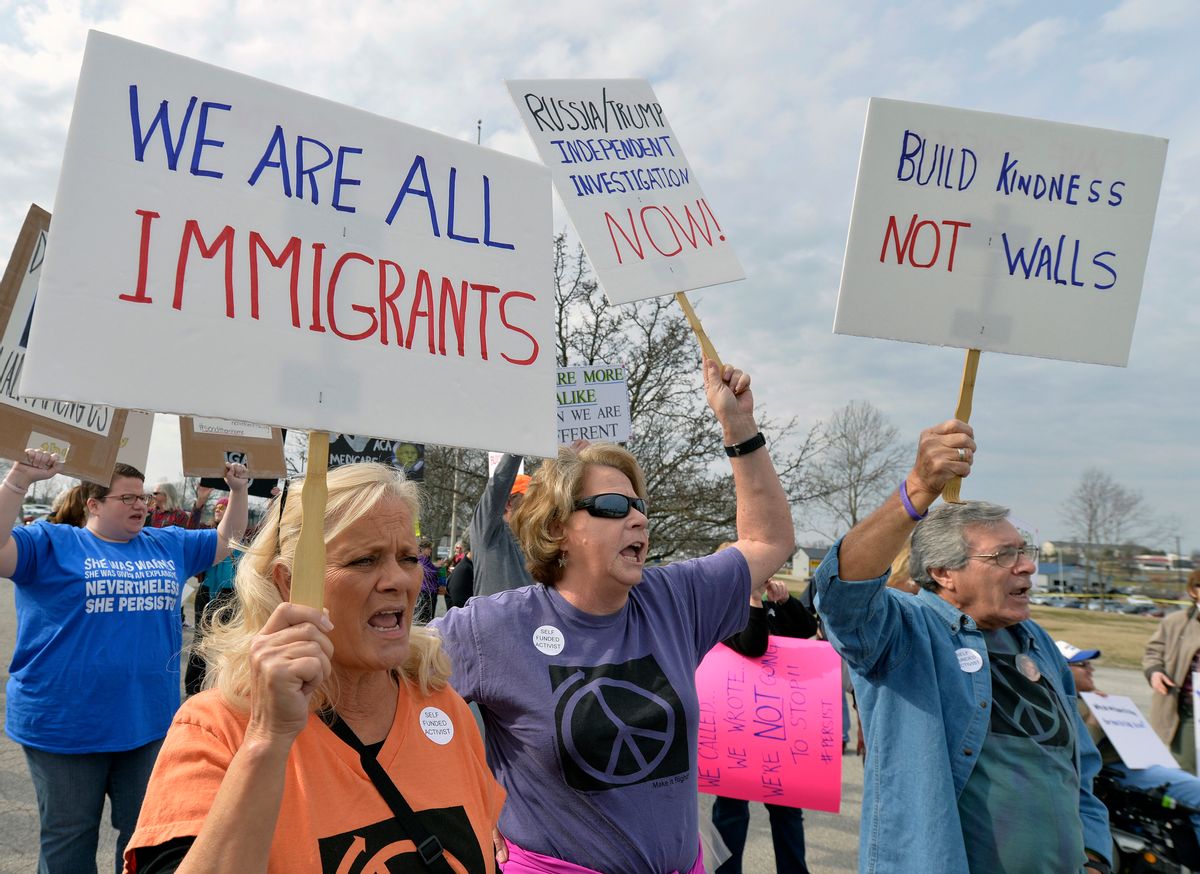 A group numbering in the hundreds gather outside the American Legion Post 34 to protest the appearance of Senate Majority Leader Mitch McConnell R-Ky., and the policies of the Trump administration Tuesday, Feb. 21, 2017, in Lawrenceburg, Ky. () (AP Photo/Timothy D. Easley)
--

"I can do this every weekend."

Those words, scrawled in thick black marker across poster board, floated in the large crowd protesting the election of President Trump. It was barely 24 hours after Trump announced his first travel ban, and New Yorkers were doing the unthinkable: voluntarily spending their Saturday night at JFK.

The scene played out in red and blue states across the country, from Birmingham, Alabama to Los Angeles, California. Outraged but inspired, Americans all over the country fought back.  A month later, the protest actions show no sign of slowing down. Good, said Paul Krugman. In an op-ed published today, the New York Times columnist wrote, "Outrage at what’s happening to America isn’t just justified, it’s essential. In fact, it may be our last chance of saving democracy."

Krugman also had a message for those leaders who called for compromise: "Get real."

"Anyone who claims that being seen as obstructionist will hurt them politically must have slept through the past couple of decades. Were Democrats rewarded for cooperating with George W. Bush? Were Republicans punished for their scorched-earth opposition to President Obama?" Krugman noted.

White working-class voters could also potentially turn on Trump when, "they realize that his promises to bring back jobs and protect their health care were lies."

Krugman also issued another reminder that Donald Trump lost the popular vote, and "would have lost the Electoral College if a significant number of college-educated voters hadn’t been misled by the media and the F.B.I. into believing that Hillary Clinton was somehow even less ethical than he was. Those voters are now having a rude awakening, and need to be kept awake."

Plus, as Krugman wrote: "the districts that will determine whether Democrats can take back the House next year have both relatively well-educated voters and large Hispanic populations, both groups likely to care about Trump malfeasance even if the white working class doesn’t (yet)."

If the prospect of winning elections still seems unlikely or unconvincing, perhaps saving democracy itself is appealing? Our president is indeed a "would-be autocrat," and, Krugman continued,"Republicans are his willing enablers. Does anyone doubt it? And given this reality, it’s completely reasonable to worry that America will go the route of other nations, like Hungary, which remain democracies on paper but have become authoritarian states in practice." Don't think it  can't happen here?

A crucial part of the story is that the emerging autocracy uses the power of the state to intimidate and co-opt civil society — institutions outside the government proper. The media are bullied and bribed into becoming de facto propaganda organs of the ruling clique. Businesses are pressured to reward the clique’s friends and punish its enemies. Independent public figures are pushed into collaboration or silence. Sound familiar?

This is our reality, at least for now. If we want any hope of changing that,  Krugman leaves us with the following directive. "When neither the president nor his allies in Congress show any sign of respecting basic American values, an aroused public that’s willing to take names is all we have."