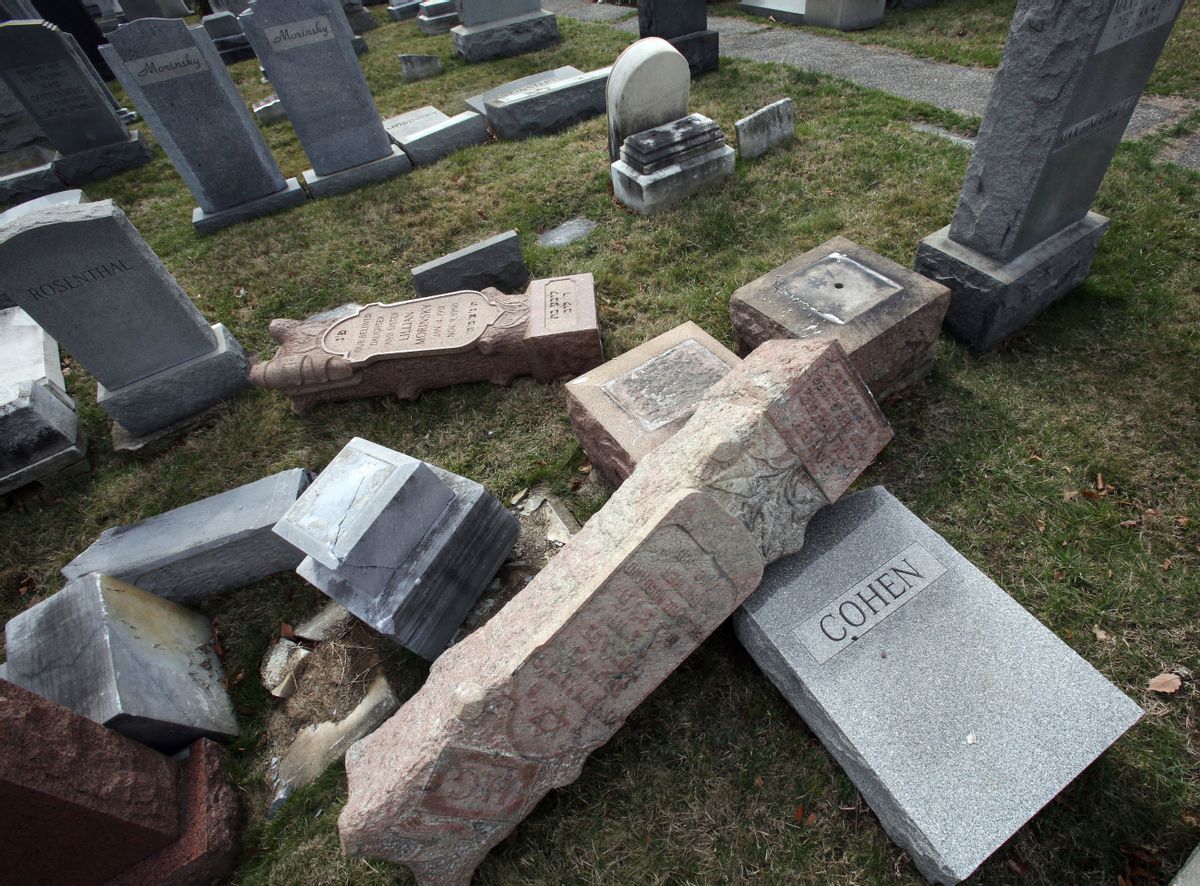 Damaged headstones rest on the ground at Mount Carmel Cemetery on Monday, Feb. 27, 2017, in Philadelphia. More than 100 headstones have been vandalized at the Jewish cemetery in Philadelphia, damage discovered less than a week after similar vandalism in Missouri, authorities said. (AP Photo/Jacqueline Larma)
--

President Donald Trump suggested to a group of state attorneys general on Tuesday that his supporters were not responsible for the rise in hate crimes and anti-Semitism. He instead charged people from "the reverse" for stirring terror in an attempt "to make others look bad."

Pennsylvania Attorney General Josh Shapiro reportedly asked the president about the pattern of bomb threats targeting Jewish community centers and the recent desecration of Jewish cemeteries. Trump indicated at the meeting that he would address these concerns in his speech tonight before Congress, but he also dismissed the notion that his base of supporters was solely responsible for the hate crimes. Anna Orso, the reporter who broke this story, wrote that Shapiro "stopped short of saying Trump thinks his supporters are being framed for bomb threats." Nevertheless, the attorney general inferred that this what the president meant.

Trump's implication that people on the left have been behind these incidents echoes a recent talking point of his friend, Anthony Scaramucci, who shared a story earlier today on Twitter that claimed the Democrats purposefully incited violence at Trump rallies, insinuating that the same could be happening with the bomb threats.

Scaramucci later backtracked, saying it was "highly irresponsible to jump to conclusions" after tweeting in German.

Republicans and Trump allies have previously tried to pin nefarious activities on Democrats. Republican members of Congress have said that the people attending their town halls are not actual constituents but paid protestors working for George Soros or former President Barack Obama.

According to a report from BuzzFeed News, Trump did say at the top of his remarks that he thought what was happening at Jewish sites was "reprehensible."