LISTEN: "Planet Earth II" producer on location challenges: "Pockets of the natural world which are in pristine condition are shrinking"

Salon talks to Chadden Hunter, a producer who spent more than three years filming one episode of "Planet Earth II" 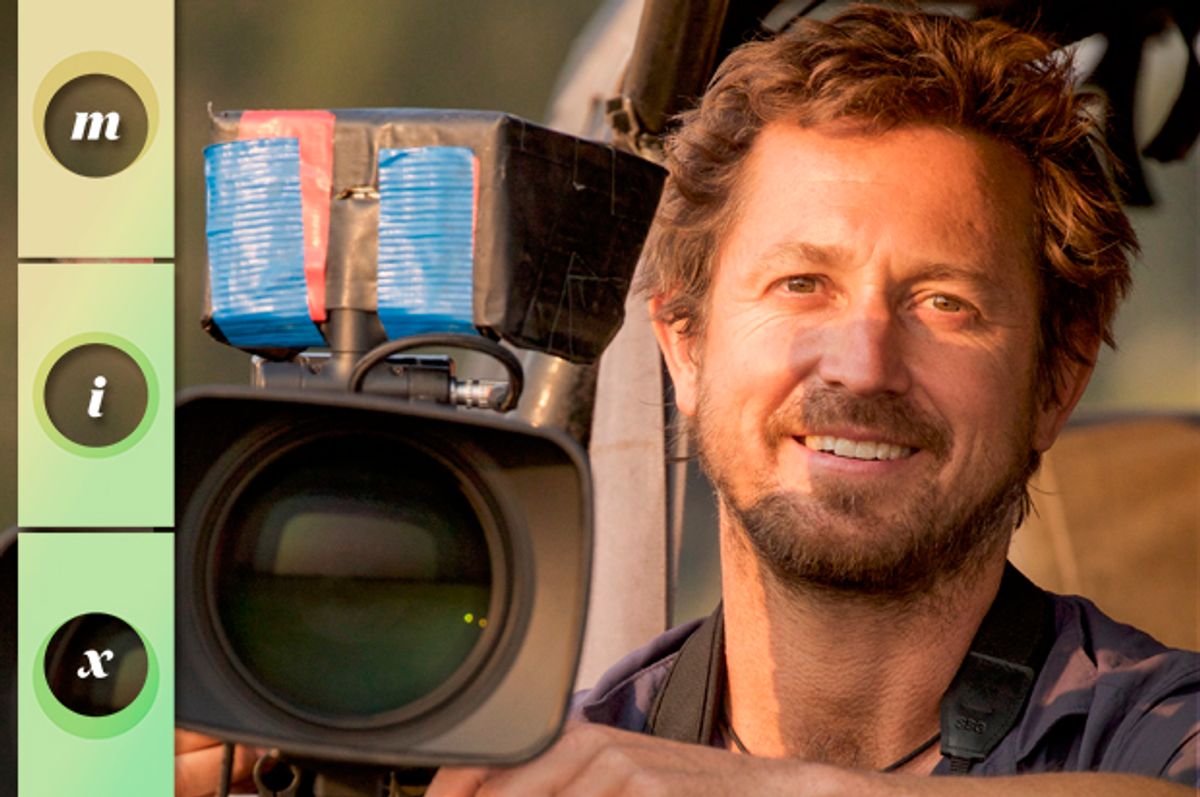 In 2006, BBC’s nature documentary series “Planet Earth” dazzled millions of viewers around the globe with indelible images of wildlife that only a few years prior to its debut seemed all but impossible to obtain.  Its follow-up, “Planet Earth II,” made its stateside premiere on February 18, and shows how much has changed in the decade since the original series aired.

To find out more about the making of this highly-anticipated sequel I spoke with Chadden Hunter, producer of the upcoming Grasslands episode of “Planet Earth II.” This audio feature is part of a larger Salon Mix story that also includes a video feature.

More than a decade ago, the wildlife documentary was seen as an element of niche programming, often relegated to public television or cable channels such as Discovery. The arrival of “Planet Earth” changed that. Narrated by Sir David Attenborough, the 11-part series took five years to produce and was the most expensive nature documentary series ever commissioned by the BBC.

More pertinent to the viewer, however, was the fact that “Planet Earth” was the first nature series to be filmed in high definition at a time when HDTVs were still considered to be something of a luxury purchase.

And “Planet Earth” made the most of its high definition cameras by capturing unforgettable footage including, among other things, close-up images of the notoriously reclusive snow leopard stalking its prey.

Now BBC has introduced “Planet Earth II” to viewers around the globe, a six-part series made possible through the efforts of six separate producers working with 60 cameramen who were deployed in 40 countries, and a multitude of environments, for a total of more than 2000 days.

Melanie McFarland: Chadden Hunter is an Australian wildlife biologist and filmmaker who has filmed in locations around the world. In “Planet Earth II,” Hunter takes viewers to eleven different countries to capture images of the wildlife inhabiting these remote places for the “Grasslands” episode. But viewers who watch the special behind-the-scenes segments of “Planet Earth II” may recognize him from the first series.

McFarland: Fortunately for Hunter, the stars of “Grasslands” are its residents — rhinos, elephants, lions, antelope, and even smaller fauna. And like every other “Planet Earth II” producer, Hunter and his team had to go to extraordinary lengths to capture them on high definition video and remarkably clear audio.

Hunter: I was really trying to find stories that made people think about grasslands differently. I think a lot of people think of the great savannas and then maybe the antelopes and big herds, but I really enjoyed getting into deep grass and thick grass. We went into a really underworld, a real Pan's Labyrinth, places that other people had never gone, into grass tunnels to find really unusual little animals that you just hadn't seen that much.

McFarland: Among the most remarkable evolutions in “Planet Earth II” is the production’s ability to gain even more intimacy with its subjects. Cameras are much smaller than they were in 2006, and this enables crews to make use of drones and stabilized miniature devices to get closer and venture more deeply into these environments with minimal disruptions to their inhabitants. Hunter says utilizing these innovations is an absolute necessity for reasons beyond the need to respect these fragile and increasingly pressured biomes.

Hunter: I think what's happened in that last decade is that there's so much exposure to the natural world whether it’s through the internet or people with their own cameras being able to post things, that it has been harder and harder to I think surprise viewers and raise that bar.

Ten years ago … you could probably get away with showing people an animal and just saying "there's an incredible animal" but these days it really is an art form. And it’s an amazing experience it really stretches you creatively and it’s a real challenge for us as directors but we really are trying to compete with different genres these days, we really are trying to make it a very cinematic experience for the viewers and a very visceral and immersive journey.

McFarland: For Hunter, part of employing that artform required him to spin drama out of the survival stories of the tiniest creatures.

Hunter: On “Planet Earth II” we had one producer per episode and that's unprecedented for a series like this but I think it’s a reflection of how much work goes into making the programs these days. The level of sophistication and the technology is such that for a single producer like myself, I spent three and a half years just focused on the “Grassland” episode and that took every bit of brain power, every bit of my effort for three and a half years, just to make one hour of “Planet Earth II.”

We've really had to make this push into much deeper storytelling and I think that's where we've stretched ourselves and we really used the composers so much more. The relationship we had with Hans Zimmer and his team was so much more in depth because we really tried to milk the story telling and trying to ... get more out of the natural world.

McFarland: Another quantity has made wildlife filmmaking more difficult over the past decade, and that’s the accelerated rate of environmental degradation around the world.

Chadden Hunter: What's happening is that the parts of the planet that are pristine and still natural are shrinking and so what you're finding more often these days is that you go to those dwindling pockets of wilderness and your chances are these days is you'll bump into another film crew, because we are focusing on those last remaining places.

Something like the Okavango delta in Botswana was somewhere I went and filmed, its a magnificent area and well protected, but 10 years ago there might have been more patches of Africa where I could have looked for more stories, where as it is more of a challenge to ... pockets of the natural world which are in pristine condition are shrinking.

And a huge indicator of that challenge is the fact that we've put in the “Cities” episode. That really was a deliberate decision to say, ‘Well we can't keep pretending that it is pristine jungles and mountains and deserts and the world isn't changing. What is the fastest growing habitat on the planet? It happens to be the urban world.’ And so our decision to make one entire episode about the cities, I think, is an indirect answer to your question and that's a reflection of, well the world looks slightly different now and we need to reflect that.

McFarland: When the original “Planet Earth” first aired, it came under fire from conservationists who took issue with the series’ focus on wildlife and spectacular habitats without including enough of a counterbalance by showing humanity’s impact on the environment. In its press notes, producers maintain that “Planet Earth II” is not a meant to be conservation series either. However, Hunter believes that in exposing these rare habitats and species to the world, the series is serving that cause.

Hunter: We reach an incredible amount ... we reach millions of people around the world with a celebration of nature, and humans will always have this inbuilt love for nature. What you've got to find, though, is that hook that actually makes them care a bit more about the world or think a bit more deeply about it. So it’s always a challenge. I think major series like this can't get away with not having a message in there, but at the same time if you literally just had a chainsaw from the opening minutes of the series then you would lose 90 percent of your viewers anyway and then, have you really helped?

Who knows if we hadn't been making these shows and had school kids interested in the polar bear and writing to their politicians, who knows? It might be much worse without these shows. But they're part of a suite of programs and I think you need to be able to celebrate the thing you love in order to also have the message to protect it. It’s a balancing act, it’s a delicate balancing act.

McFarland: And Hunter says that in spite of new and broadening threats to the Earth’s wildlife and ecosystems, he sees reasons to be optimistic.

Hunter: One amazing creature that we filmed in Grasslands was the Saiga antelope. It’s a really bizarre looking animal, it looks like something from another planet, and it almost went extinct. For decades it was unfilmable: No one could see it, it was out on the Eurasian steppes, these vast open grasslands. And we went to Kazakhstan, it was the first time in about 20 or 30 years that the population had gotten back to a level that was filmable. And I took a camera man who had seen them 20 years ago and he said to me, ‘I never thought I'd ever see this animal again.’ And they'd gone from about the last few thousand -- this is about 20 years ago -- to over 350,000, because the Kazakhstan government had done a good job of trying to control poaching. And it was a story of showing you, well OK, there are, with some efforts, there are stories that are good news stories and animals that will bounce back.

So I think that's another thing to cling onto is the fact that nature is .... it is quite resilient. We just have to give it a chance and we have to kind of open our eyes, and as humans look ourselves in the mirror and change some of our behaviors. But a lot of it is not lost if we can just wake up and change some of the ways we live.