"Planet Earth II": Celebrating nature's majesty in an era of its endangerment

BBC's "Planet Earth" programs are wildly popular. Should they be more direct about threats to the environment? 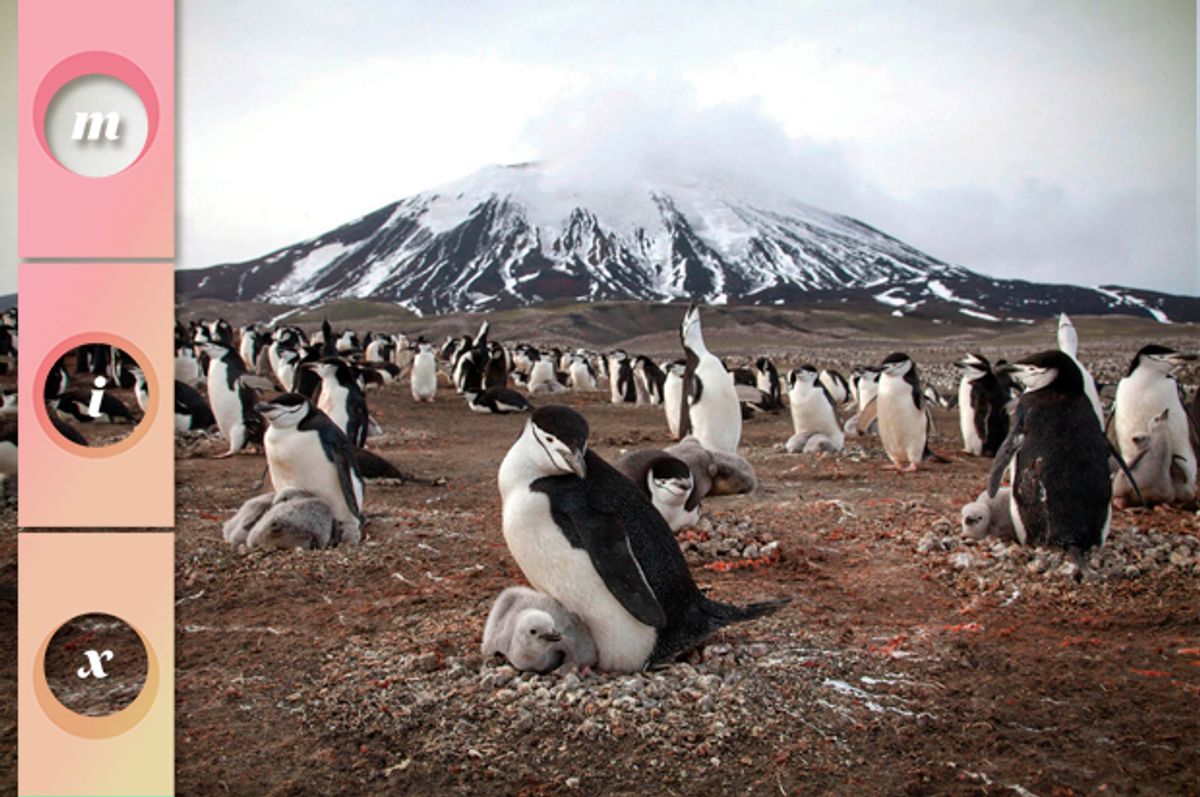 Animals are the stars of endless social-media memes, fascinating enough to build entire channels around their cuteness, their conservation and their rescue. Somewhat perversely, however, the biggest wildlife celebrities earn their fame for their role in life-and-death struggles. “Shark Week,” for instance, is a Discovery Channel institution that has been a summertime viewing standard for nearly three decades. People love sharks and may be aware that many are vulnerable or endangered. But the main reason that viewers tune in is to see those fearsome teeth.

It follows that when “Planet Earth” first aired on Discovery Channel in 2006, one moment that caught in the memory was a slow-motion scene of a great white shark chomping a presumably adorable seal.

The equivalent barn burner in “Planet Earth II,” which made its U.S. premiere on Feb. 18, involves a newly hatched iguana and an army of racer snakes. (The Mix video accompanying this article includes a taste of that matchup, but you can watch in its full pulse-pounding glory on YouTube or in an encore airing of the “Islands” episode, the series opener.)

“Planet Earth II,” currently airing on BBC America, has arrived in the United States more than a decade after its 11-part predecessor. The first series, “Planet Earth,” was a groundbreaking effort that took five years to produce.

At that time it was the most expensive nature documentary series ever commissioned by the BBC and the first to be filmed in full high-definition. In 2006 high-definition TVs were still quite expensive in the United States. Given the fact that the series had aired in 130 countries by mid-2007, presumably it also helped to sell a lot of flat-screens.

“Planet Earth II” has been more than three years in the making and ups the ante in a number of ways. Its six main episodes are filmed in ultra-HD and with high dynamic range technology, making the animals, plants and vast landscapes look more realistic than ever. But the difference American viewers may notice right away is that the inimitable Sir David Attenborough narrates the episodes being telecast in the United States. (Sigourney Weaver is the narrator of the American version of “Planet Earth.”)

Of course, the most significant changes that have taken place in our world between 2006 and 2016, when “Planet Earth II” made its U.K. debut, are environmental. Executive producer Mike Gunton has acknowledged this.

“One of my colleagues was saying how disheartening it is to drive through mile after mile after mile of oil plantation to get to a piece of remaining forest to do your filming, where there's a small population of that particular animal left,” Gunton said during a recent interview.  “I think there's a lot of wilderness still there, but it's just harder and harder to get to.” Sounds depressing, doesn’t it?

This difficult truth gets to the heart of the conundrum that the creators of “Planet Earth II” are facing. The series is massively popular because it makes wildlife and sweeping natural vistas look like the precious beauties that they are. At the same time, if there were ever a time for such a wide-reaching platform to be used in the service of saving the environment, it is now.

“There is a view that by showing these extraordinary, beautiful, complex stories about these creatures, we're somehow suggesting that all is well in the world or implying that all is well in the world,” Gunton said. “I can see that there is an argument to be made there, but . . . in series like 'Planet Earth,' you've got quite a tricky oil and water situation. It's a celebratory show. It's about how animals survive. It's not about how the habitats survive, but I still think you have to mention it.”

Each of the six “Planet Earth II” episodes dives into locales the average person can only dream of visiting — that is, if they even know of their existence. “Jungles,” airing Saturday at 9 p.m. on BBC America, journeys to habitats in seven countries, including the Tandayapa Valley in Ecuador, West Papua province in Indonesia, and various verdant locations in Brazil, to show viewers creatures they may never have seen before — including a frog so small it can be hunted by an insect.

Other “Planet Earth II” episodes “Islands,” “Mountains,” “Grasslands” and “Deserts” explore biomes with the same keen eye for the rare and wonderful. In addition, Attenborough’s detailed and dramatic storytelling transforms the activities of animals in their natural habits into operatic tales of romantic pursuit, noble duels and just as often, the ever-present threat of starvation. (On March 25, BBC America is airing "The Making of Planet Earth II," a behind-the-scenes episode that shows the challenges crews faced during production.)

Listen to an interview with "Grasslands" episode producer Chadden Hunter about the three and a half years he spent making that episode:

The wildlife documentary series was a popular genre long before the airing of the first “Planet Earth” and it will continue to be for the foreseeable future. What differentiates this series from those that came before is its innovative approach to filming nature. The healthy budget allowed for the use of gyroscope-stabilized cameras to capture packs on the hunt and high-powered lenses have zoomed in on the tiniest details of the smallest creatures and plant life to render them with outstanding clarity.

The popularity of “Planet Earth” led to something of a mainstreaming of the nature film genre, as did the box office success of 2005’s Academy Award-winning French documentary “March of the Penguins.” Disneynature, for example, launched in 2008 and has been opening wildlife films in movie theaters ever since. Its inaugural U.S. release, “Earth,” came out in 2009 and was marketed as a companion piece to “Planet Earth.” “Earth” was co-directed by Alastair Fothergill (who executive produced “Planet Earth”) and episode producer Mark Linfield.

In an era when wildlife footage can be enjoyed on YouTube as well as across multiple cable networks, the series producers were inspired to raise the stakes with "Planet Earth II." In the making of it, six separate producers worked with a 60-member camera crew  deployed in 40 countries, and a multitude of environments, for more than 2,089 production days.

Episode producers also took advantage of a range of the latest technological innovations, including lightweight devices that enabled cinematographers to obtain footage from drones and harvest intimate shots from strategically placed cameras that could be camouflaged and operated remotely.

This is how viewers were able to witness close-up views of the rare snow leopard in its habitat during last weekend’s “Mountains” episode. And the aerial shots are even more impressive in the new series, allowing perspectives of animals in flight.

We’re also in an age of ecosystems in crisis.

Here in the United States, “Planet Earth II” is airing as the Environmental Protection Agency ushers in new leadership. It is now led by Scott Pruitt, a climate-change denier who sued the EPA repeatedly as Oklahoma’s attorney general and someone who is cozy with the fossil fuel industry.

On Tuesday the president directed the EPA and the U.S. Army Corps of Engineers to “review and reconsider” a 2015 rule created to protect wetlands, streams and rivers. Yet another executive order that the president is said to be preparing instructs the EPA to rewrite the 2015 regulation limiting greenhouse-gas emissions from existing electric utilities.

Elsewhere in Washington, Congress has approved a resolution that kills regulation prohibiting surface-mining operations from dumping waste into waterways and is debating rollbacks to the Endangered Species Act.

“Planet Earth II” was produced long before this administration came into power. Even so, accelerated environmental degradation has been a point of discussion for many years. A 2016 report produced by the Zoological Society of London and the conservation organization World Wildlife Fund estimates that from 1970 to 2012, the global population of vertebrate species declined 58 percent. And a January report in PLoS ONE has indicated that over the same stretch of time  freshwater populations have declined 81 percent, marine populations 36 percent, and terrestrial populations 38 percent.

Gunton and the producers of “Planet Earth II” responded to such concerns by showing the impact of environmental degradation within the series’ context. Gunton said, “Rather than shrieking to a halt and then saying, ‘Right now, we're going to do conservation. We're going to shake our fingers and say, ‘Look what's bad.’"

An example can be seen during “Islands,” as a horde of ants attack a crab and slowly kill it, dismembering its carcass once it expires. In the scene, Attenborough explains that creatures on islands are particularly vulnerable to outside populations invading and overtaking their territories, adding that the ants were brought to the crab’s island by humans.

Another key evolution between the first series and this one is the inclusion of “Cities” as a habitat, an entire episode that speaks to the impact humans are having on wild populations.

“There are animals that do well in cities — and some that do incredibly well — but I think that you have to also counter that by the fact that of course, those are very few creatures,” Gunton explained. “A relatively small number of creatures that find cities to their liking. You have to remember all those that don't and many of those . . . get on the thick end of the stick when it comes to cities.”

The turtles featured in that episode exemplify this: Hatchlings are shown emerging on a beach in Barbados and, as Attenborough’s narration explains, are instinctively drawn to the ocean by moonlight. But this natural urge turns tragic when tens upon tens become confused by brightly lit urban landscapes behind them and head off in the wrong direction. The images are heartbreaking.

But are they enough? Wildlife documentary producer and present Martin Hughes-Games doesn’t believe so.

“My biggest concern is that ["Planet Earth II"] presents a kind of fantasy world, a utopia, where it's almost as if man has had no influence and tigers roam free in mighty jungles,” Hughes-Games said on the CBC current affairs radio program “As It Happens.” “I fear this gives people a sense of complacency about what is really going on in the natural world, which is, of course, an appalling disaster right now.”

Gunton said that while such opinions have merit, “within the context of this series, it would just be so dissident. Some of my more activist colleagues say, ‘Who cares?' I think you have to remember as a program maker, particularly in the U.K., that you've promised to show [the audience] something. They've invited you trustingly into their sitting rooms. I think you have a duty to stretch them but within the parameters of your promise.”

“Planet Earth II” made its U.K. debut in November and was viewed by 12.26 million people, making it the most-watched natural history documentary in more than 15 years. About  9.5 million viewers tuned in for the series’ finale.

In the United States the first episode’s numbers have been more modest; the simulcast over BBC America, AMC and Sundance TV earned an audience of 2.7 million in Live+3 ratings, which includes the number of DVR viewings in the three days following the premiere.

In comparison, Discovery Channel’s U.S. premiere of Louie Psihoyos’ “Racing Extinction,” which makes endangered species and environmental advocacy its central focus, attracted 11.5 million total viewers in Live+3 ratings for its December 2015 debut. To be fair, Discovery is part of most cable providers’ basic packages and distributed to 96 million U.S. homes, giving the channel a wider reach than BBC America, which is in 80 million households. Such success does indicate that, at least in the U.S., there is interest in a blunter conservationist angle.

That said, “Planet Earth II” is an undeniable television success for both BBC and BBC America — so much so that a week and a half ago, BBC America announced it will air “Blue Planet II,” a new seven-part exploration of the world’s oceans that will once again be narrated by Attenborough.