Trump has filled barely half the offices he's allowed to. Richard Nixon could have told him that's a big mistake 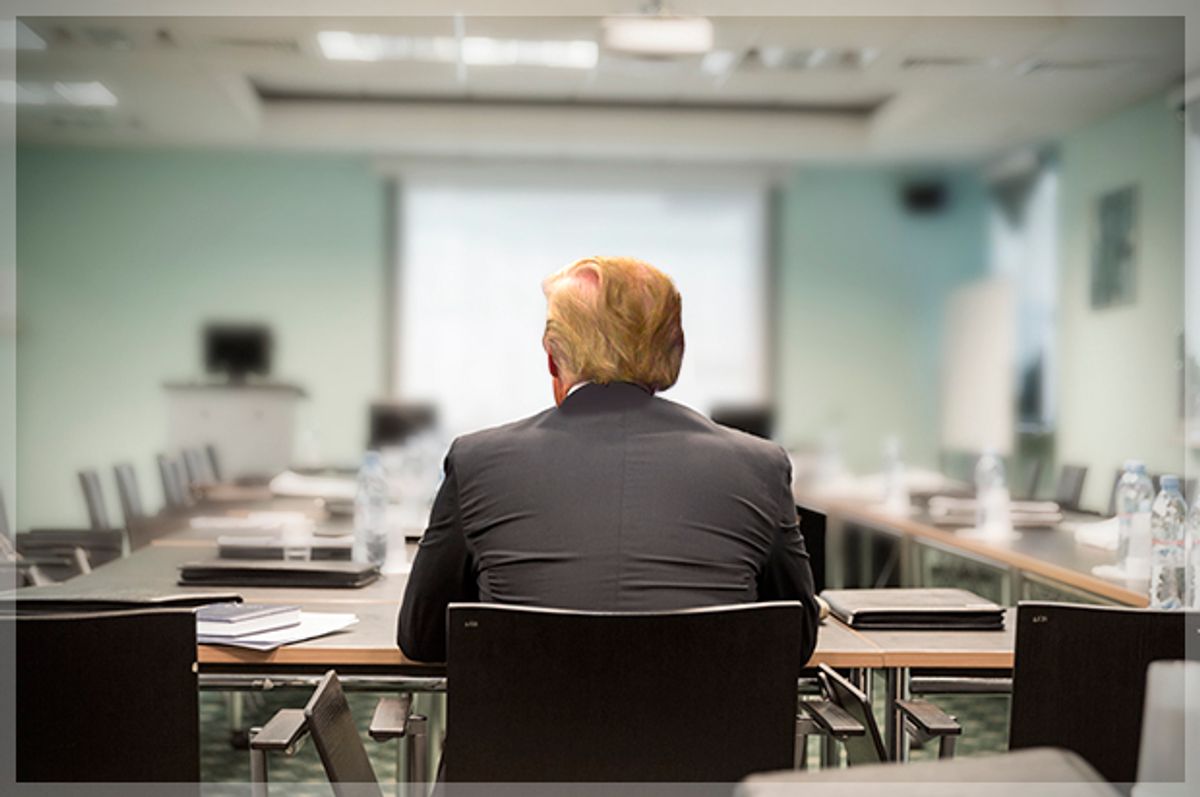 Since he taking office in January, President Donald Trump has been slow to fill appointments that as chief executive he is entitled to make under the law.

Several of his Cabinet posts remain unfilled as Trump's nominees have not been officially confirmed by the U.S. Senate. Trump has yet to install new management at Department of Housing and Urban Development as well as those for energy, labor, agriculture and the interior.

Predictably, the president has put the blame for this situation on Senate Democrats, saying they are unfairly obstructing his Cabinet appointees.

“It is a disgrace that my full Cabinet is still not in place, the longest such delay in the history of our country,” Trump tweeted on Feb. 8. “Obstruction by Democrats!”

It’s true that Democrats have used stalling tactics to delay the approval process for some of Trump’s nominees by staging boycotts of committee hearings. Ultimately, however, both of the nominees they temporarily boycotted were confirmed.

The real culprit for the delays seems to be the Trump administration itself, which has been running a slower nomination process than past presidents irrespective of the actions of Congress. For instance, Trump’s pick for secretary of agriculture, former Georgia Gov. Sonny Perdue, was not formally announced by the president until Jan. 18. By contrast, Tom Vilsack, the man who filled the position during the Obama administration, had been announced on Dec. 17, 2008, more than a month before Obama's swearing in as president. Perdue hasn’t even submitted the required paperwork to the Senate Agriculture Committee, according to reports.

Furthermore, the Cabinet vacancies are only a tiny portion of the offices to which the president can appoint people under federal law. Most such positions, sometimes called political appointments, do not require a Senate confirmation vote. According to an analysis by CNN, nearly half of the 4,000 positions that Trump is free to fill now have no announced officeholder; this includes many high-level posts frequently involved with formulating presidential policies.

Responding to media reports about the many political appointments he’s yet to make, made, Trump told Fox News on Tuesday that he is intentionally leaving those offices vacant but hadn't made clear to the public that he is doing so.

“My messaging isn’t good,” the president said in an interview with the hosts of “Fox & Friends.”

“A lot of those jobs I don’t want to appoint because they’re unnecessary to have,” he continued. “You don’t need all those jobs. . . . Isn’t that a good thing? It’s not a bad thing.”

Assuming this is an accurate summary of Trump’s strategy for executive appointments, it is likely born from a conviction that he thinks government should operate like businesses, where employees can be fired at will and civil service laws don’t apply. That understanding could prove harmful to the administration’s ability to understand and effect government policy.

Part of Trump’s unconventional approach to the bureaucracy may be his conviction that people assigned to oversee federal agencies frequently become beholden to them. In this regard, Trump seems to be resurrecting the administrative approach favored by former President Richard Nixon, who worried frequently about his Cabinet appointees “going native.”

Throughout his entire presidency, Nixon was at war with the bureaucracy, according to Margaret C. Rung, an associate professor at Roosevelt University who specializes in the history of the American administrative state.

Nixon “spent considerable time and effort attempting to bend bureaucrats and their agencies to his will, either through political appointments that went deeper into the agency, the use of budget impoundment, or efforts to reorganize the executive branch,” Rung said via email.

Trump is doing some of the same things in his nascent administration, according to an extensive report about the inner workings of the administration filed last month by Politico writers Josh Dawsey and Nancy Cook:

The White House is installing senior aides atop major federal agencies to shadow the administration's Cabinet secretaries, creating a direct line with loyalists who can monitor and shape White House goals across the federal bureaucracy.

The aides chosen by the White House — given the title of senior adviser in each agency — have already been responsible for hiring at some departments and crafting the blueprint of Trump policy before the Cabinet members win Senate confirmation to take office. . . .

“They want to keep kind of a West Wing-infused attachment to the agencies,” said a person familiar with the arrangement. “There will be tentacles from the White House to these agencies. . . . The effort is to demonstrate that all points lead back to certain people,” such as Donald Trump’s son-in-law, White House senior adviser Jared Kushner, or chief of staff Reince Priebus.

Another person involved in the transition said Trump's team wanted a "real strong line at the agencies to have someone monitoring and directing what they're doing."

The Trump administration is taking a similar approach to foreign and defense policy as well, setting up a powerful new organization within the White House called the Strategic Initiatives Group, headed by two of the president's closest advisers, chief strategist Steve Bannon and Trump's son-in-law Jared Kushner.

It's been reported that the genesis of the group reflects the fact that neither of those men trusted the recently departed head of the National Security Council, Michael Flynn, a virulent critic of the larger defense and foreign policy establishment.

Ironically, the National Security Council was established in its current form by Nixon because he and his top foreign policy adviser, Henry Kissinger, believed that the departments of state and defense were too independent of the chief executive. Trump has also followed the Nixon precedent in excluding the directors of the nation's intelligence agencies from his reorganized National Security Council.

The Trump approach to executive branch staffing has a further parallel to the Nixon administration's in its focus on loyalty to the president above other factors. One reason for this may be that the American right is in a tremendous state of ideological flux at the present moment. While Trump has a few broad goals — immigration enforcement, renegotiation of trade agreements, fewer government regulations and more infrastructure spending — much of his program remains indeterminate. That's another parallel to Nixon, a man who spent his entire career positioning himself squarely in the middle of the Republican Party and as a result was despised by both hard-core conservatives and East Coast moderates.

"Loyalty for Trump is purely personal," said Andrew Rudalevige, a professor of government at Bowdoin College who has written extensively on the federal bureaucracy. "He doesn't have a clearly defined policy agenda on many points and so, as a result, past criticism of the president can be disqualifying — as in the case of Elliott Abrams who wasn't hired at the State Department because he wasn't a true believer."

Centralizing information access and policy creation authority within a tightly controlled White House team is a mistake for Trump, according to Rudalevige. "The office of the president has all kinds of people who are there to help the presidency and who would be loyal to whatever direction the executive would want to go," the professor said.

"He doesn't know how bureaucracy works," Rudalevige said. "Trump has the difficulty that he hasn't figured out how to get from his ideas to specific policies, irrespective of whether they're good ideas."

Failing to understand how the federal bureaucracy works could undermine Trump's presidency, not just because he may be unable to steer the government toward his brand of nationalist conservatism (whatever that ends up being) but also because he may engender dislike among federal employees who know how stuff really gets done.

The Nixon precedent might be predictive in this regard as well.

"When J. Edgar Hoover died, Nixon appointed someone outside the FBI to be director, rather than promote from within. This enraged FBI career administrators and may have been a prime motivation for Deep Throat, Mark Felt, to leak information on the Watergate investigation to Woodward and Bernstein."