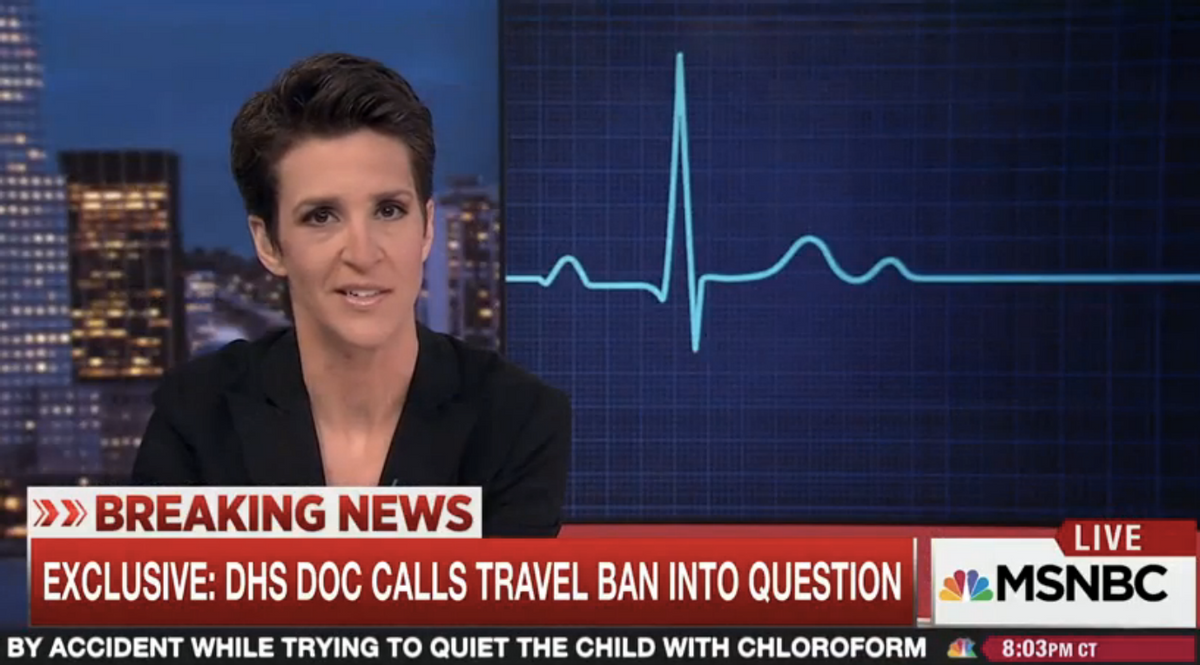 A newly leaked report from the Department of Homeland Security weakens the central rationale for President Donald Trump's controversial travel ban, finding that foreign-born extremists who plan violent attacks in the United States typically radicalize only after they have lived in America for some time.

While the official White House spin on why President Trump's revised travel ban has been delayed revolves around claims that Trump needed to preserve a moment of elusive positive press coverage following his address to a joint session of Congress earlier this week, the report from DHS suggests the White House is more likely scrambling to craft a legal justification for banning travel from seven Muslim-majority nations without a clear and imminent threat against the nation.

MSNBC’s Rachel Maddow first reported on the leaked intelligence assessment, which undercuts the case for the ban. The report — titled, “Most foreign-born U.S.-based violent extremists radicalized after entering Homeland; opportunities for tailored CVE programs exist” — is dated March 1, 2017, and appears to be the final version of a draft document first obtained by The Associated Press in February.

"We assess that most foreign-born, U.S-based violent extremists likely radicalized several years after their entry to the United States, limiting the ability of screening and vetting officials to prevent their entry because of national security concerns,” the report's main finding read.

In February, the AP published an earlier draft of the DHS report that found "foreign-born, U.S.-based individuals who were inspired by a foreign terrorist organization to participate in terrorism-related activity were citizens of 26 different countries, with no one country representing more than 13.5 percent of the foreign-born total." That version of the report concluded that “country of citizenship is unlikely to be a reliable indicator of potential terrorist activity.”

Thursday's leaked report examined 88 cases between March 2011 and December 2016 "of foreign-born individuals engaged in terrorism activity in the homeland," using publicly available information from academic and government sources. More than 50 percent were living in America for 10 years or more before they were indicted or killed, according to DHS.

According to Maddow, the report was prepared by the Homeland Security Office of Intelligence and Analysis in coordination with the State Department, Customs and Border Protection, Immigration and Customs Enforcement, National Counterterrorism Center and U.S. Citizenship and Immigration Services.

Trump’s suspended travel ban on people entering the U.S. from Iran, Iraq, Libya, Somalia, Sudan, Syria and Yemen has been described by the administration as “extreme vetting” meant to prevent potential terrorists from entering the country. But this report from major agencies in Trump's own administration shows that his "extreme vetting" measures may not be particularly useful in screening out the majority of people who radicalize after arriving.

Both native and foreign-born extremists had similar “experiences and grievances” leading to their radicalization, which included “perceived injustices against Muslims in the homeland and abroad because of U.S. policies, feelings of anger and isolation, and witnessing violence as a child," the document said.

“The national security justification for this whole ban — this setting up of extreme vetting — is bull-pucky,” Maddow said. “There’s nothing they can set up at the border to tell you years down the road who might become … a radical and violent person years from now."

The ban is currently stalled in the courts, but the White House has pledged to release a new executive order eventually to replace it. The first order, issued last month, also blocked the settlement of Syrian refugees in the U.S.

“I look at this, and you know what I think?" Maddow asked at the end of her segment. "I think the Muslim ban is dead."

DHS spokesman David Lapan confirmed the report's authenticity to CNN on Friday. “It does not include information from historical or current investigative case data or current intelligence or threat stream data from classified data sets,” Lapan noted, adding that it is based only on "unclassified, open source materials, including a Department of Justice list of unsealed cases."

This week's leaked DHS report echoes a recently released report from the New America Foundation that found no clear connection with violent attacks or attempts in the U.S. and travel from certain countries.