Opiate for the Masses: "Making History" and "Time After Time" add to this season's TV travel addiction

The television schedule is hooked on time travel this season, with two new shows debuting this weekend. 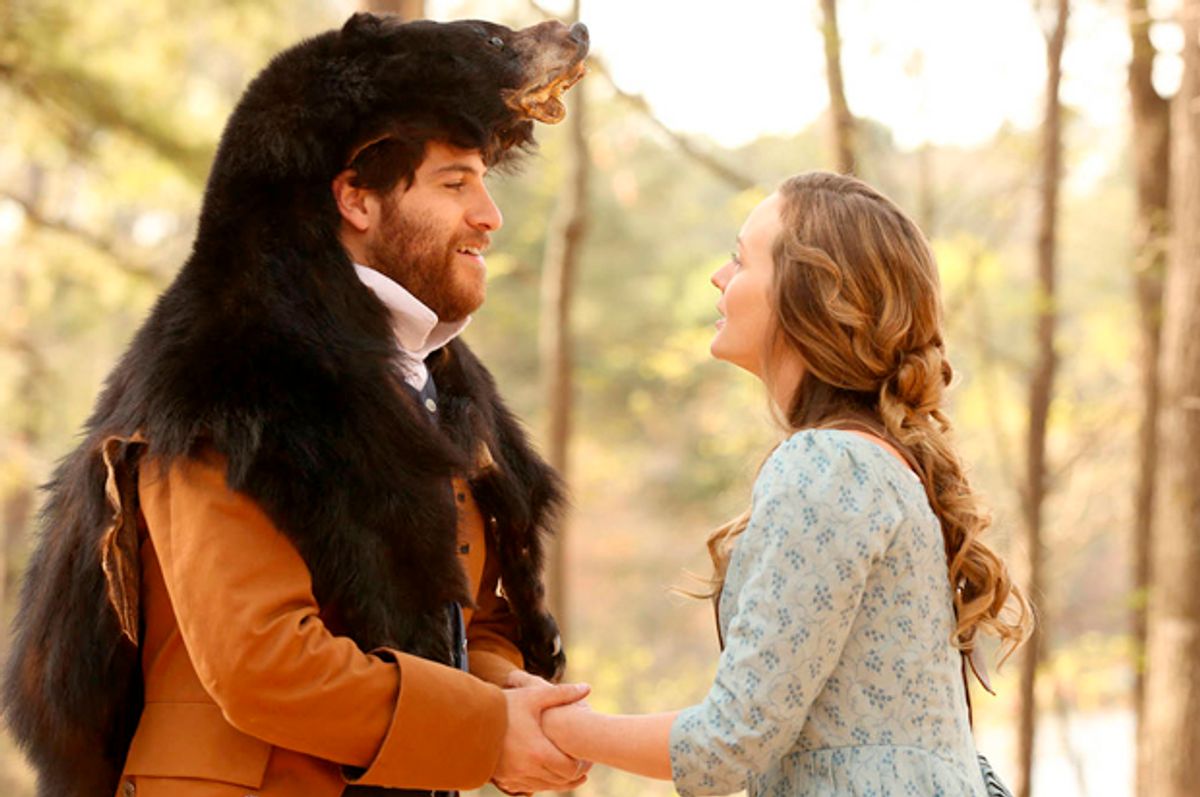 Oh, to have a time machine! What would you do with it? Buy shares in some world-changing company the moment it goes public? Bet on the World Series? There’s a popular answer. Others would visit their younger selves directly following some soul-shattering event to deliver reassurance that life will somehow get better. Conversely, maybe said moment is where everything slides into the toilet, so shape up buddy!

Some Big Picture thinkers down a few beers, enjoy a few tokes and start wondering how the world would be different if it were possible to go back in time and kill Adolf Hitler. (And there’s always a hippie in the crowd who would use the same time travel opportunity to support the future dictator’s artistic ambitions instead. Wanker!)

Few concepts beg to be altered as frequently as our timelines, which is probably why television creators cycle back to time travel over and over again. The land of “what if” is full of natural highs. And this Sunday brings two more kinds of trips between past and present: Fox’s “Making History” and ABC’s “Time After Time.”

Maybe these shows would stand out more if the season weren’t already lousy with series about chrononauts. “Doctor Who,” Syfy’s “12 Monkeys” and Starz’s “Outlander” were already on the schedule when Hulu and J. J. Abrams sent us “11.22.63,” a miniseries based on Stephen King’s book about a mission to prevent John F. Kennedy's assassination.

The CW is time-hopping all over the place, what with Barry Allen (Grant Gustin) zipping through timelines on “The Flash” (something he whiffed so badly that he’s been barred from going back to the past) and “Legends of Tomorrow” leaping through the years in pursuit of a villain named Vandal Savage. It also introduced “Frequency,” the TV version of a 2000 film in which a modern-day woman speaks to her deceased dad, who is still alive in the past, via a dusty ham radio.

NBC’s “Timeless” recently ended its first season; amazingly, the show managed to keep its African-American voyager Rufus (Malcolm Barrett) alive in spite of the fact that they dropped him into the Civil War era, and pre-Civil War times, and 1934 Arkansas. He even made it through Nazi Germany unscathed. Incredible!

There’s an African-American character on “Legends of Tomorrow” who contends with segregation as well, but he also can transform into a human flamethrower and has a lot of powerful pals.

Point being, various shows get all timey-wimey with their storylines to make observations about societal evolution while taking shots at our widespread addiction to nostalgia. Indeed, the tendency to imagine decades gone by as being more civilized and graceful than they truly were is still very much intact. A portion of “Time After Time,” kicking off with a two-hour premiere Sunday at 9 p.m., feeds this idea in an expository scene that takes place inside the elegant drawing room of H. G. Wells. It's a gorgeous space of polished mahogany and brocade in which the average person would be all too happy to down gallons of sherry and pass out.

“Making History,” which debuts Sunday at 8:30 p.m., treats time travel with about as much seriousness as “Bill and Ted’s Excellent Adventure”; it’s a messy, feather-light romp that establishes early on that, among other things, the past smelled pretty bad.

The show was created by Julius Sharpe, who employs the same zany sensibility here that he honed as a writer for “The Late Late Show with Craig Ferguson.” For instance, the show’s time machine is a gigantic duffel bag tricked out with internal wiring. Flip a few switches, and blammo! The occupant unzips the bag and emerges into his or her choice of epochs lacking sewage systems and indoor plumbing, when pedestrians casually vomit during afternoon strolls.

The bag’s owner, Dan (Adam Pally), is a doofus who inherited it from his late father (How? Why? Stop overthinking it, you’ll hurt yourself.) Dan conscripts his colleague Chris (Yassir Lester), a history professor, to join him when he notices that his regular pleasure jaunts to Revolutionary War-era Boston have somehow altered the present so much that Starbucks sells tea.

The series doesn’t spend much time discussing how this happened, or the oft-explored theory known as the butterfly effect, preferring to find comedy in the notion that 18th-century Bostonians were idiots easily distracted by ham bribes, urine jokes and movie quotes.

“Making History” does comment on the shoddy treatment of women throughout the ages via our forefathers’ near-complete dismissal of Paul Revere’s daughter Deborah (Leighton Meester), a woman whose ambitions will surely wither and die if she remains in 1775. Dan and Chris persuade her to join them in 2017, when women can do anything! Except become president.

“Making History” isn’t the first show to turn on that point. “Outlander” is led by a romantic plot involving an English woman in 1945 (Caitriona Balfe) who tumbles through a time portal to 1743 Scotland where she falls in love with Highlander (Sam Heughan). Balfe’s Claire Randall is a wartime nurse, quite able to hold her own and used to being treated, if not as a complete equal to men, then at least with great respect. In 1743 Heughan’s Jamie Fraser is Claire’s husband and protector, but they are also partners who save one another.

Ilana Glazer’s loopy 2016 event series “Time Traveling Bong,” meanwhile, showed its female lead contending with sexism during her stops in a number of historic periods. Its conclusion: The only time that didn’t suck for women was the cavemen era. And that’s only because Sharee wasn’t required to bathe or shave, she wasn’t body shamed, and nobody jabbed her in the boob for kicks. That cavemen were wild but considerate lovers, and the prehistoric weed was dank were bonuses.

Deborah Revere has none of those challenges in 1775 or 2017. On the other hand, she’s not getting hunted by Jack the Ripper so, you know, every cloud, et cetera, et cetera. All the single ladies face that danger on “Time After Time,” which is executive-produced by Kevin Williamson and follows the same plot as the 1979 movie starring Malcolm McDowell and Mary Steenburgen and posits what could happen if Wells’ time machine actually worked.

H. G. Wells' (Freddie Stroma) friend Dr. John Stevenson (Josh Bowman) makes that discovery when cops in old-timey London come to Wells’ home in pursuit of Jack the Ripper -- John’s secret alter-ego. Wells has conveniently constructed a time machine in his basement, and John uses it to escape through time. Alarmed at the implications of how a serial murderer could impact the future, Wells leaps after him, right into modern New York City.

The Wells of “Time After Time” is an optimistic visionary who posits that technology and science will eventually usher in a utopian age for humankind; the scene in which he gets his first glimpse at TV news is simply depressing. In contrast, John adapts to our world with speed and alarming cruelty.

“Time After Time” starts out as a commentary on apathy and casual violence, embodied by Jack the Ripper, while allowing for Stroma’s Wells to embody the unrelenting spirit of hope and optimism.

Williamson’s best-known works are “Dawson’s Creek” and the iconic “Scream,” but he also served as an executive producer on the abominable CBS series “Stalker.” With “Time After Time” he’s struck a balance between honest emotional resonance and salacious violence. Strangely enough, this combination makes this midseason series more charming and enjoyable than one would expect.

Will these shows last? Not likely. History tells us that midseason series have a challenging time finding a foothold on the schedule, and that’s especially true when it comes to late-launching comedies on Fox and genre series on ABC. "Making History” faces the added impairment of being somewhat reminiscent of and paling in comparison to “Drunk History,” which isn’t a show about quantum leaps but does, in a sense, journey through eras using the magic of pure inebriation.

However, both shows are entertaining in limited doses, and maybe that’s all a person needs. We are in living in the darkest timeline, after all. As portals to “what if” escapism go, they’re fairly harmless. Might as well jump.