You will miss her when she’s gone: Noname soars live

The Chance the Rapper collaborator combines funk and hip-hop, sun and clouds 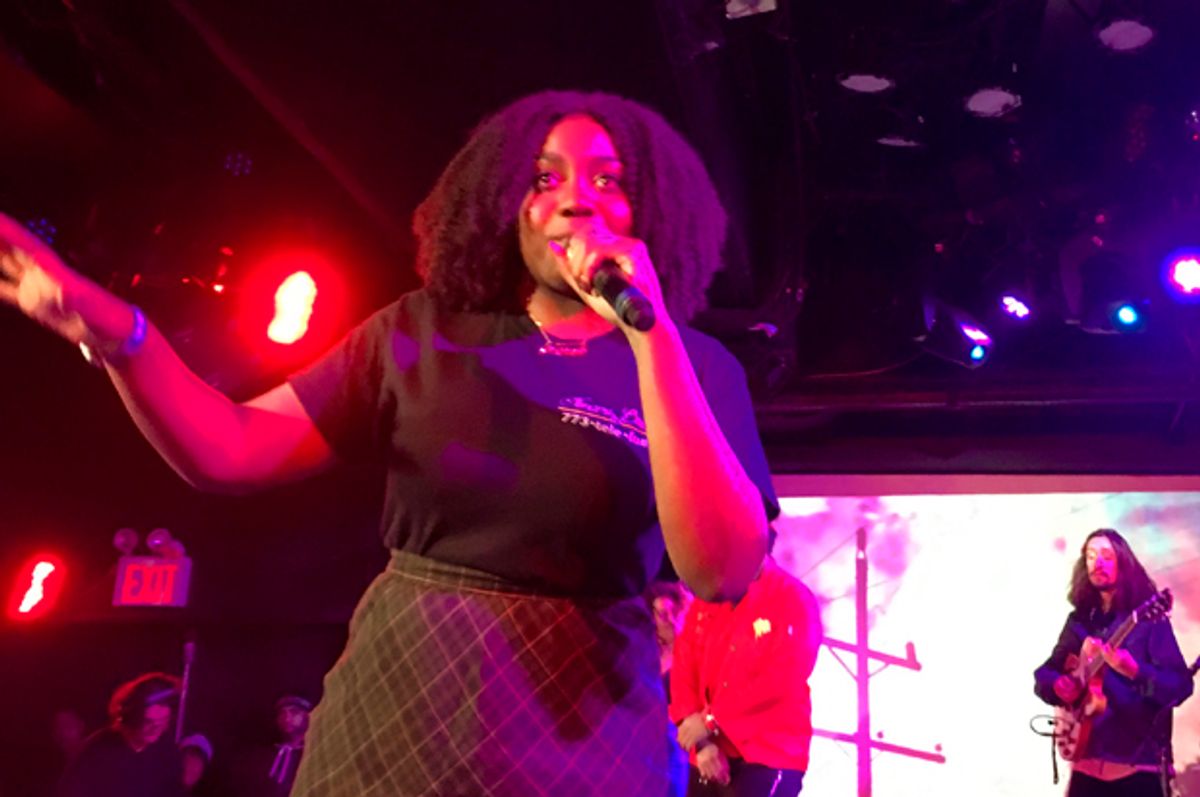 The rapper Noname understands the power of absence. She gained a following as a spoken-word poet in Chicago and then as a Chance the Rapper collaborator. Her debut mixtape, “Telefone,” was in the works and in demand for years before she released it this past summer.

Those unaware of the fanatical anticipation for Noname’s debut were reminded on Thursday night. Noname was at Le Poisson Rouge, a New York stop in her Telefone Tour. She began the show offstage. Her funky six-member band — keyboard, drums, bass, three backup singers — played the opening notes to “All I Need,” as impatient fans’ tweets were projected onto the two giant screens that acted as a backdrop. “Listen @noname I don’t mean to rush perfection but it’s getting late . . .” one read. Another was a chant: “drop #telefone,” repeated eight times.

The audience was a colorful mix of black, white and brown, about equal parts male and female, but virtually all were under 30. The show was sold-out and fans were packed tight, with backpacks and weed smoke filling the voids. The desire brewing was palpable. “This is going to be beautiful,” a girl standing next to me said to a friend. When a bouncing “Hello” came from offstage, an eruption of excited screams followed.

Noname took her time walking onto the stage, a drink in one hand, a microphone in the other, and she rapped the song’s first lines with the audience — “Noname off the drugs/ Noname quit the weed/ Telefone delight/ Love is all I need” — before she put down her drink.

There is a roundness to Noname’s voice that gives it a childlike quality. She is deft at changing pace, but only subtly fluctuates her tone. She has a smiling face tattooed on the inside of her right wrist and a frowning face tattooed on the inside of her left wrist. When her voice softens, it grows crisp and it sounds like she’s raising the left.

But there’s balance. Tragedy, love, and thrill comingle in Noname’s music, each connected by a fleeting summertime nostalgia: “Mama say she love, love, loved us/ When the lights was off we had to stay with cousins/ Granny at the BBQ with petty ass husband/ Summertime, city life, Chi-town, my town, my town,” she raps on “Diddy Bop.”

Noname’s roots are in Chicago, but she recorded “Telefone” in Los Angeles. The result of doing so, she has said, is a record that is sonically sunny. The production is light, with twinkling keyboards and springy bass — as ethereal as her lyrics are grounded. The vibrancy is reminiscent of late 2000s backpack rap, by artists like Lupe Fiasco and Kids These Days.

Recently, bright music has begun to come back into favor, but with a funk twist. Members of Noname’s band looked and sounded like they had been cryogenically frozen in 1975 and woken up just for the show. Her bass player wore a flower in his long hair and when he played he close his eyes, bit his lip, and stuck out his nose, as if he were sniffing out the notes.

For most of the show, the dual screens were occupied with slowed-down scenes from classic movies with black stars, including “Friday,” “Jackie Brown” and “Do the Right Thing.” The color on the films was distorted by filters that were literally purple and figuratively wistful. Noname, who is 25, was an infant when these films were released. She grew up thousands of miles away from where each of these was set. But the films’ themes, mood and independent spirit are baked into her music.

And Noname has a flair for the theatrical. Midway through the show, the lights dimmed and she exited the stage. She returned wearing round jumbo glasses and a sparkly red cape that read “Noname” on the back. She skipped around the stage and sang the third verse of The Isley Brothers’s “Contagious.” Her half-baked superhero was more compelling than most in the Marvel franchise. Donning a cape was both an act of power and one of playfulness.

By the end of the show, Noname would shake the character. It would have felt inappropriate when she rapped about real-life heartbreak in Chicago on a song called “Casket Pretty.” “And I'm afraid of the dark/ Blue and the white/ Badges and pistols rejoice in the night/ And we watch the news/ And we see him die tonight,” she rapped as Radio Raheem put his fists together behind her.

With few modern parallels, Noname can conjure the highs and lows of a person’s past — the seeds of love and the shock of loss. Her experiences are specific but the feelings are universal. So it was no surprise that when she finished her last song (the single “Yesterday”), picked up her drink and walked offstage, the audience would not let her leave. The crowd chanted her name —“Noname! Noname! Noname!” — like she was a superhero.

The prospect of absence is painful only when there’s a deep connection.