Batwoman and Midnighter: DC’s two badass, Batman-ish, gay characters you should be reading 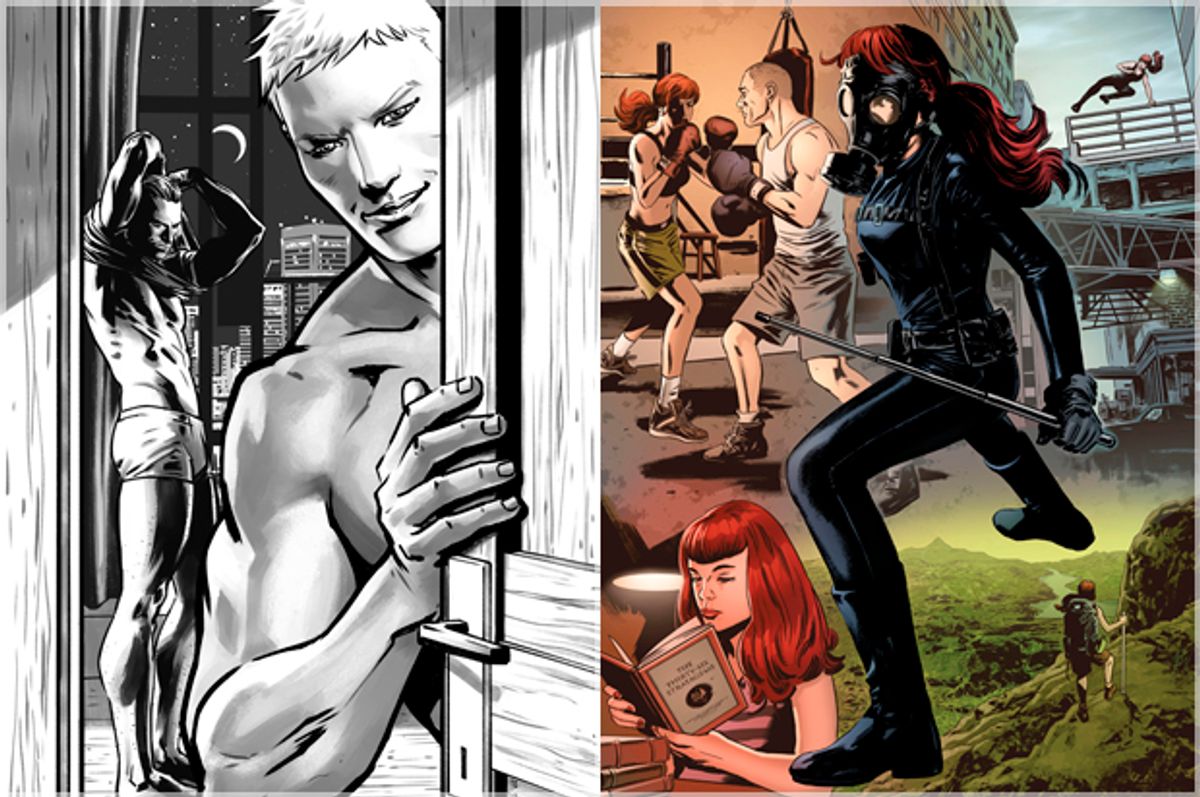 Two relatively obscure DC Comics characters, Batwoman and Midnighter, have a lot in common. Both are Batman-like in costume or style. Both are gay and defiant of gay stereotypes. Both are badass, thanks to Batwoman’s military training and the fight computer in Midnighter’s brain. Unfortunately, despite their inherent awesomeness, both have also been tough to find on comic shelves — until recently.

Things are looking up for these characters, and more important, their fans. After a remarkable 12-issue “Midnighter” series sold well in collected form, DC brought back writer Steve Orlando for the miniseries “Midnighter and Apollo.” The character is also expected to appear in “The Wild Storm,” a reboot of the universe that originally spawned him. At the same time, Batwoman is getting her own series for the first time in several years beginning March 15, and she’s sharing the lead with Batman in “Detective Comics,” DC’s oldest title. The writers of these series — Orlando for “Midnighter” and Marguerite Bennett and James Tynion IV for “Batwoman” — are also gay, breaking a trend of diverse mainstream characters being mostly written by the same old straight white guys. If you’re a fan of better representation and/or compelling characters, these are comics you need to check out.

The original Batwoman, Kathy Kane, debuted back in 1956, but she didn’t have the staying power of Alfred, Robin, Batgirl and other Bat-characters. Ironically, the character existed mainly to counter the perception that Batman and Robin were gay, though Batman’s comical reluctance to commit to Batwoman didn’t help the case.

The new Batwoman debuted in 2006, in DC’s weekly series “52,” but she was fleshed out in a remarkable “Detective Comics” run by writer Greg Rucka and artist J. H. Williams. Though the new Kate Kane shared both her names with the original Batwoman, she was original, striking, and of the moment. Kane grew up in a military family and couldn’t imagine another life. Then she was thrown out, a casualty of Don’t Ask, Don’t Tell. When her superior officer all but begged Kane to lie about her sexuality, she refused. The future Batwoman drifted around for a while until a chance encounter with Batman showed her a new type of service; she realized that the bat signal had a bigger meaning and purpose than one rich dude with issues.

Kane’s journey to superherodom was a twisty one, and that tangled path is part of her charm, as noted by Bennett, who writes Batwoman in “Bombshells” (which imagines the first superheroes as all-female) and will co-write the new Batwoman series with Tynion. Bennett feels that a strong appeal of the character is her fallibility. Unlike Bruce Wayne, whose stories make him feel predestined to be Batman, not to mention a perfect specimen, Kane had a tortuous path full of many mistakes, much like the life of a real person. Bennett finds this refreshing and enjoys presenting a queer hero who doesn’t have to be “polite, infallible, or hyper-sanitized.”

Midnighter is a different sort of Batman analogue; he was actually inspired by ’30s pulp hero the Shadow, who, in turn, inspired the creation of Batman. But Midnighter has filled a Batman-type role from the start. He was created in 1998 by writer Warren Ellis and artist Bryan Hitch as part of Stormwatch, a government-sponsored superteam published by WildStorm (an imprint and roster of characters later purchased by DC). Midnighter debuted with a partner in the crime-fighting and romantic sense: Apollo. It was no secret that the two were a spin on the Night Man/Day Man dynamic (to borrow some terms from “It’s Always Sunny in Philadelphia”) of Batman and Superman.

Midnighter is quite different from Batman; he kills the bad guys, and he’s not just an ordinary fella fueled by rage and ninja training. Along with Apollo, Midnighter was modified by creepy scientists to be nearly indestructible and also brilliant. Midnighter’s main modification is a fight computer in his brain that allows him to imagine every possible scenario instantly, inspiring his matter-of-fact catchphrase, “I already know how this fight ends.”

Midnighter was mostly on the shelf in the 21st century, never finding the spark of the Ellis/Hitch gems. But a new Midnighter series in 2015, written by Steve Orlando and illustrated by the inventive ACO and other artists, was a revelation. This series brought new depth to Midnighter, giving equal time to his personal life (including bed partners and bar friends) and his penchant for finding inventive ways to cripple or kill the “bastards,” as Midnighter calls anyone who preys on the weak.

In an interview, “Midnighter” writer Steve Orlando mentioned what a breath of fresh air Midnighter was when he debuted back in 1998, calling the violent vigilante “a character who behaved counter to what many would expect from gay men” via then-popular portrayals on shows like “Rosanne” and “Will and Grace.” Midnighter might be the most confident character in comics, and that confidence extends from his ridiculously heightened fighting skills to his equally action-packed love life. Orlando said that Midnighter shows that “there’s no one way to be gay. We need young people to know that.”

There’s a lot going on lately when it comes to sexual representation at DC Comics, which is feeling more and more true-to-life. “Mother Panic” features a lesbian vigilante who’s part of the adventurous “Young Animal” imprint. Harley Quinn has been a huge seller for DC, thanks to humorous adventures that have separated Quinn from her obsession with the Joker and made her a strong antihero — and a bisexual heroine who has a relationship with fellow anti-heroine Poison Ivy. The bisexuality of Wonder Woman is no longer danced around.

Such characters and their stories are a natural for stories about supes. As Orlando notes, there’s a “strong relationship between themes of the queer community and superhero themes.” To quote Buffy’s mentor Giles: “The subtext is rapidly becoming text.”

DC is doing a better job with diversity, but whether they — or any other company — continue to follow that direction will likely depend on sales. The best way to support these characters is to find your local comic store and pre-order the comics you want. Orlando said this is the best form of support, but buying trades and digital comics is also helpful. “Any type of support shows them the hunger for these characters is out there.” That support is also important for the gay creators who are getting the chance to reshape a more diverse DC Universe. As Bennett said, this is about “not just representation on the page, but behind the page.”