Trans-ported: the power of walking in someone else’s shoes 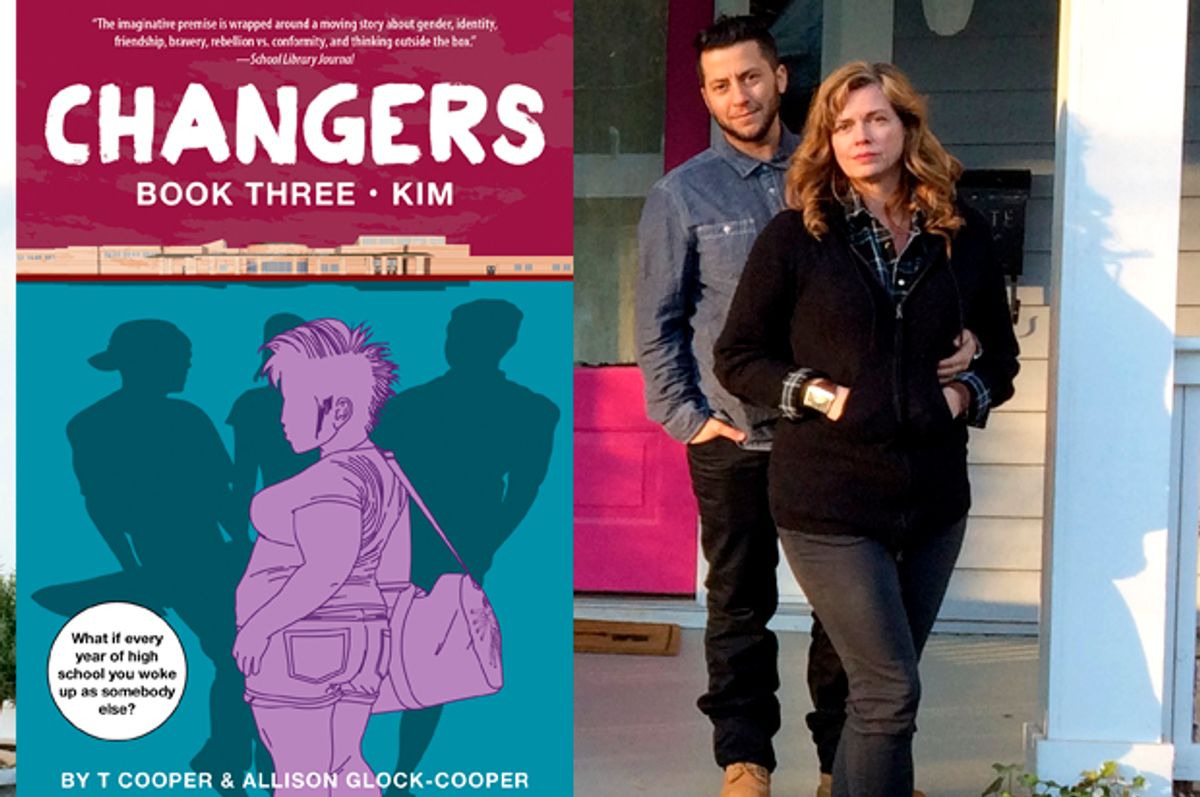 The snow from a recent blizzard has not quite melted and Natalie Egan arrives to meet me at her tiny WeWork office late and visibly flustered, apologizing profusely as she drags a wheelie suitcase for a trip to visit her children in Philadelphia. Bundled in a fitted black parka, her brown bob tucked neatly beneath her hat, with only the barest hint of dark eyeliner, her style is effortless suburban mom. She seems, as my own mom would say, fatootsed. That she also happens to be the CEO of Translator, a startup that provides in-person narrative and virtual reality solutions to inspire corporate employees to be their most authentic, productive selves, adds another layer to a personal identity narrative that is as impressive as it is inchoate.

At 39, and on hormones for just this past year, Egan still considers herself a newbie to all the discrimination that being trans entails. “I grew up as a white male with access and privilege,” she tells me. “I really didn’t realize what I had. I never had been discriminated against.” At first, this is a tough statement. Yet, deeply ingrained in her psyche are the feelings of despair and isolation from hiding her true identity from her family, her colleagues and even herself. Then along came the Caitlyn Jenner interview with Diane Sawyer and, next thing you know, Egan started bawling uncontrollably on the sofa while watching it. A transgender friend alerted her to the fact that she might be trans and everything began to make sense.

All of which, Egan feels, makes her the ideal conduit to bring authenticity and diversity solutions to the universe of corporate HR. Why? As an experienced B2B tech-startup entrepreneur and a recent “shape-shifter” she understands the mindset of all the players, from the lost to the found to the white, straight corporate males, because, you know, they have feelings too!

Feelings that, if accessed properly, can make them more authentic beings and thus more sensitive to their diverse brethren. Believe or not, this will lead to more happiness and productivity in the workplace and be a boon to the economy of our great nation. Why? According to a Gallup poll, only 32 percent of the workforce is actually engaged. Egan believes authenticity may spark engagement in that otherwise blah, Instagram-scrolling 68 percent. In other words, if you can’t bring in ping pong tables and Pac-Man to create a positive environment, you can at least work to erase our nation’s identity crisis via connectivity in the workplace.

Before you say Who really cares about the white straight males?, consider how strapping a virtual reality viewfinder to your face might actually increase tolerance and empathy by not only allowing users to “walk in the other person’s shoes,” but also to feel more actualized and aware in their own. Thus, Bob can understand on a cellular level how shitty it is to be Dorothy after he has unwittingly tossed off some transphobic gaffe. To do this, though, Bob must first know Bob. For Egan, this experience is everything. It’s at the core of true acceptance and understanding identity, both one’s own and the person who sits at the desk across from you and the desk across from them. Meanwhile, they in turn begin to understand you. It’s a small, small but ultimately real world.

“I never could figure out why I didn’t fit in. I didn’t have the language to say, ‘I want to be a girl.’ I had these two older brothers who taught me how to move through life as a man. I was always watching them,” says Egan “When I was a little kid, I didn’t think I wanted to be a girl. I just thought I wanted to be pretty but I was still hiding a desire to dress in women’s clothes all the time. As a 5-year-old and a 10-year-old, I didn’t have the language for it. As I got older, I thought of it as an addiction; I would binge and purge on it and then put it away and that ripped my life apart, the constant, secret shape-shifting.”

To some extent, we all shape-shift as we move through the poignant and painful gristle of childhood to adolescence. I mean, I wanted to be a dancer on “Soul Train.” Then, a serious novelist. Neither of these desires came to fruition — yet — and for the most part, I’ve made my peace with that. That said, vocation is affected by identity politics, but it’s not identity. So “Hey, mom, I’m an actress” is different from, “Hey, mom, I’m a Jewish lesbian.” Or, “Hey, Goldman Sachs, I’m transgender. Please put on this virtual reality thingamabob to experience and understand my daily reality.”

Also taking up the shape-shifting baton, married authors T Cooper and Allison Glock-Cooper explore themes of diversity, gender and acceptance in “Changers,” their funny and revelatory series of YA novels about an ancient fictional race of high school students who swap identities at the top of every school year, now in development for TV. “Changers Book One” opens with the protagonist Ethan, a freshman boy, becoming Drew, a popular, pretty girl forced to deal with gender bias.

Ethan-now-Drew subsequently becomes Oryon, an athletic African-American boy in “Changers Book Two” who now has to confront issues of race. Subsequently Ethan-then-Drew-now-Oryon becomes Kim, an overweight Asian girl in “Changers Book Three” who then has to manage body-shaming and grief. Yet, no matter her/his gender or the arcane rules laid down by the Changers Council, our intrepid protagonist doggedly continues to love the same fiercely intelligent girl. It’s a gender-fluid, John Hughes-style fantasy plus all the feels.

Allison Glock-Cooper is a screenwriter, memoirist and senior staff writer for ESPN and comes from a conservative Southern family. T Cooper is a novelist, documentarian and television writer from New York who is also Jewish and transgender. They live in Atlanta with Allison’s two teenage daughters, who occasionally serve as the inspiration for the series, both their in-flux personas and the kinder, more open-minded world that the Glock-Coopers would like to see them inhabit one day. “We have teenagers and their myriad friends in the house. And we have acutely painful memories of being teens ourselves,” Allison tells me in an email. “Every adult I know carries a little emotional suitcase of the pain that happened to them as a teen, because that's when you first start figuring stuff out. It's that splash of cold water, the dawning recognition of the truth of the world you live in and your place in it.”

I tell T Cooper I think that the Changers are like trans superheroes and he agrees: “You know, in my experience, rigid, fearful, binary thinking doesn't really kick in until late teens/early 20s, and when we talk about this series with kids, there's just this knee-jerk acceptance of difference and change that sadly doesn't always last into adulthood. So if a kid can read these books and goes along with not only the protagonist inhabiting and figuring out all these different identities, but also a supporting cast of difference in so many realms (sexuality, gender expression, race, size, et cetera), then to me that's just going to buttress and foster any preexisting open-hearted and -minded tendencies. Like, no big deal, a kid can go to sleep one night and wake up the next morning as somebody else. If that makes sense in the context of this series, then perhaps so much else in the real world will too.”

Sound utopian? Perhaps. If you ask Egan, it’s just a question of lining the right technology and the right expert up with the right person to tell the story and then decanting it digitally into the correct ear at the right time. Or the correct eyeball, right? “All of a sudden I was able to communicate a lot of things because of my experiences,” Egan tells me, taking a sip of tea. “I started to realize that story is a powerful way of replicating experiences and the more detail you have and the more honest you are, the more people you can connect with that story. I felt there was a need to understand these stories so people could really understand each other.”

The next move for Translator, therefore, was to create something Egan calls an “empathy moment,” which is more closely connected to real human feeling than been-there-done-that corporate compliance. “Everybody is capable of empathy but they’ve repressed their ability to do it,” Egan says. “We just have to give them the right tools.” I think of myself, half an hour ago, and wonder again about my own empathy. At what point do you know it’s real or do you just fake it till you make it?

Glock-Cooper puts it another way: “The very concept of ‘Changers’ is that all of those labels melt away pretty quickly when your body transforms into an entirely new identity every year. No person is simply one identity. We contain multitudes, and some of those multitudes are heroic, and some are a pain in the ass.”

Looking at Egan, her eyeliner a little smudged from the cold or as if she’s been weeping, her hat still on, I want to believe this kind of meaningful connectivity is possible. I really do. For one, there aren’t that many transgender CEOs. Plus, her transition was not without its own set of sacrifices: a marriage that ended, her former startup “going pop,” thoughts of suicide. “You have no idea how much I hated myself before,” she says. “Now I look in the mirror in the morning and I look like shit and I love myself; and the thing is I hated myself the most when I saw myself in the morning with makeup on after a night of cross-dressing. I would look in the mirror and go, ‘Fuck you. You’re ruining my life.’ I hated that person who was hiding so much. Now, I’m just a 39-year-old starting to feel what it’s like to love myself and it’s the greatest feeling in the entire world and if other people can get to that, that’s what my entire commitment is.”

I ask Allison Glock-Cooper if she agrees with the idea that you need to be African-American to write an African-American protagonist or transgender to write a transgender protagonist and she tells me: “To me, the very foundation of any kind of art is empathy, the notion that our souls all leach into one another, our interdependence and the glory and inescapability of that. This is not the same as representation. Which matters. And which should be considered and remedied in concrete, measurable ways. But to say to artists they cannot imagine, or that we are all in our given boxes and expected to stay there is the opposite of what any art does — which is free us.”

I consider Egan’s hands on her mug of tea, the virtual reality viewfinder on the table between us like a portal to a better world.