With "Feud: Bette and Joan," a Hollywood rivalry for the ages becomes an epic TV experience

Ryan Murphy's FX series transforms the tale of two film icons who hated each other into lovely, heartbreaking art 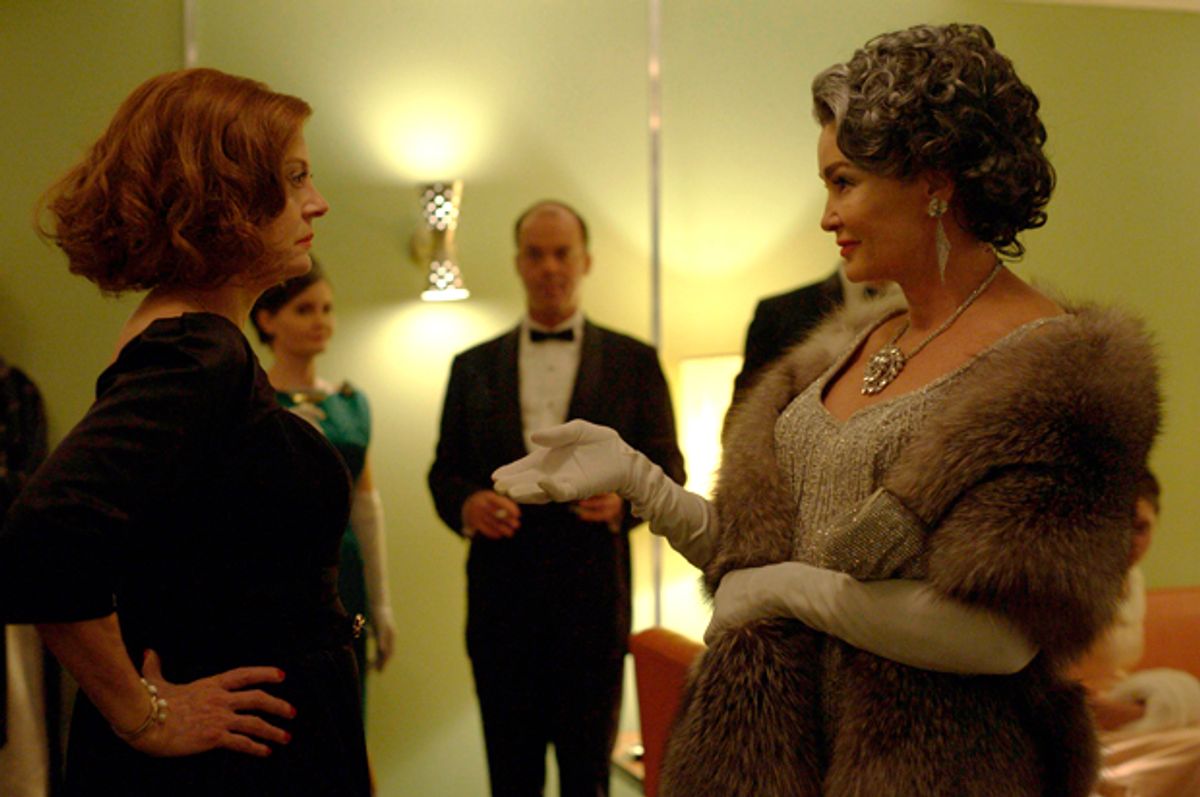 For a series about two women who detested each other, “Feud: Bette and Joan” is at the peak of its powers when it reminds the audience of everything Joan Crawford and Bette Davis had in common.  Powerhouse actresses possessing keen intelligence and the same levels of resilience and relentlessness, Davis and Crawford could have made a hell of a team both in front of the camera and behind it.

That’s one of the reasons Hollywood industry forces conspired to set them at each other’s throats long before they collaborated on “What Ever Happened to Baby Jane?

Another is far more venal and sinister: People loved to see two accomplished, celebrated women publicly tear each other apart. The public enmity between Bette Davis and Joan Crawford was the embodiment of every presumption about fading female stars, as if their embitterment were a natural result of aging, as if their career viability were only tied to the elasticity of their skin.

“You know the good thing about scotch Bob, is it only gets better when it ages,” says studio head Jack Warner (Stanley Tucci) in a telling exchange with “Baby Jane” director Robert Aldrich (Alfred Molina). “Broads, they just get sour.”

“Feud” premieres Sunday at 10 p.m. on FX, and it brims with such vituperative dialogue on purpose, to show just how brutal the Hollywood system was on some of the greatest talents in its firmament as well as to thrill the viewer with Ryan Murphy’s creatively wicked writing.

The lower Crawford, Davis and their enablers and frenemies stoop to get under an opponent’s skin, the more outrageously fantastic the series gets. Jessica Lange expresses Crawford’s toxic vanity and ambition in icy glares: Susan Sarandon channels Davis’ arch humor and slicing wit with unbelievable accuracy.

Rarely if ever has watching psychological torture felt so goddamn enticing.

Simultaneously, this makes the viewers accomplices to the crime. It’s not as if the continued popularity of celebrity gossip rags needs explaining, but “Feud” surgically cuts to the root of why collaborating and delighting in the fall of the mighty is eternally marketable. Star’s aren’t just like the rest us, really. But they aren’t much better than us either.

“Feud” is the first installment of Murphy's latest anthology series; the second season will focus on the strained marriage of Prince Charles and Princess Diana.

"Bette and Joan," however, is quite meta on a number of levels. It’s an industry insider story, one that also speaks to timeless truths about women operating in a system that’s stacked against them. Yes, it’s about the double standards actresses face when they reach a certain age and have the audacity to keep working and to demand dignified roles.

The tale also illustrates the ways that double standard is used as a tool to manipulate the insecurities of men and women alike. There were winners in this feud, but Davis and Crawford were not among them.

And Catherine Zeta-Jones’ Olivia de Havilland aptly sums up the moral of the story when she says, “Feuds are never about hate. . . They’re about pain.”

Miss de Havilland, an actress who knows something about feuds, serves as the narrator alongside contract player Joan Blondell (Kathy Bates), seen in regular intervals as part of a 1978 interview. Blondell and de Havilland’s commentary is a framing device that also humanizes Davis and Crawford; they’re witnesses for the defense, as it were. But the core story begins in 1961 when a fed-up and nearly broke Crawford decides to make her own luck and persuades director Robert Aldrich to make a movie out of a horror novel.

Aldrich is sympathetic to Crawford’s situation; prior to “Baby Jane,” he was struggling to shake off the lingering stink of three films that bombed. The opportunity to bring together notorious rivals Crawford and Davis in the same picture is too good to pass up. And if not for intervening forces, their teaming up could have begun a potent partnership. Joan Crawford had cemented her status as one of Hollywood’s biggest stars, and Bette Davis was still considered the greatest actor Hollywood had ever seen.

But Hollywood was, and forever will be, built to serve the interests of powerful men pulling the strings of less powerful men, forcing them to undermine the women who helped generate revenue. And in “Feud,” the man at the top is Jack Warner, imagined by Tucci as a volcano of misogyny and pompousness.

Warner was the last in a line of men who played Davis and Crawford off of each other professionally when the actresses were in their 40s. Studio heads offered better roles to Davis when Crawford demanded better pay and roles with dignity. And once Warner decided Davis had become difficult, expensive, and far too powerful, he snapped up Crawford to bring Davis to heel.

“Joan,” Blondell said, “was Jack’s message to Bette: ‘You’re not the only bitch in the kennel.’ And Joan wasn’t too proud to take Bette’s scraps.” One of those happened to be “Mildred Pierce” – the film that finally got Crawford an Oscar.

Crawford spend most of her career envious of Davis’ talent. Davis, meanwhile, resented Crawford’s longevity in the industry.  “Whatever Happened to Baby Jane” could have squelched that — but Warner had a vendetta, and gossip columnists like Hedda Hopper (Judy Davis, playing her with vampy relish) had papers to sell.

Caustic camp permeates “Feud,” bubbling up in energetic performances by a cast at the top of their game.Lange and Sarandon hold the center with stunning likenesses of the legends they’re portraying, but the actresses also bring their inspirations down to Earth, tempering their decadent rages and vengeful spats with a gutting sense of loneliness that tempers its lightness in solemnity.

And Murphy’s assiduous attention to everything in “Feud” pays off from its first moments. That he casts these actresses, Lange and Sarandon, to play these particular women is a comment in itself; these are stars of a certain age stepping into the skins of legends, in a show Murphy has obvious been building to for his entire career.

“Feud” also uses their struggle to tell other stories about women, too. Kiernan Shipka plays B.D., Davis’  teenage daughter, whose role in the tale at one point becomes a parable that shows how mothers shape their daughters, for better or worse, and the ways that daughters represent the greatest desires and fears of their mothers.

Even Alison Wright and Jackie Hoffman get prime cuts of meat to chew on; as Aldrich’s assistant Pauline Wright is loyal to her boss, and honest, while also harboring her own ambitions. As Crawford’s devoted domestic Mamacita, Hoffman, could have been written as a simple, stoic caricature, but Murphy grants her layers that blossom in later episodes that soften the roughness of “Feud” with a welcome demonstration of female solidarity.

Molina, meanwhile, makes Aldrich as detestable as he is lovable, embodying the sad state of being in the same boat as Crawford and Davis but unable to pass up the promise of rewards if he sells them out. He’s the man in the middle, but he’s still a man in Hollywood, and that means he has more options.

Even when “Feud” is at its ugliest, it’s gorgeous to witness. Nestled in every detail of every scene is a different homage to classic Hollywood. Mac Quayle’s vivid, provocative score channels the nerviness of Bernard Herrmann, a frequent collaborator of Alfred Hitchcock’s. Murphy’s dialogue serves as a love letter to screenwriting greats such as Joseph Mankiewicz (“All About Eve”). The opening titles harken to the work of influential graphic designer Saul Bass.

The costumes, the sets, and the cinematography lifts the series’ palettes of saturated colors, making the most of the warm light in every frame and bringing old Hollywood to life again at its most alluring and vivid. For all of its venom and sting, “Feud” is a strangely loving tribute to the stars and films of yesteryear, so much that one may wish these great ladies were still alive to see what a glorious work they inspired.