My brush with the Holy Grail

My decades-long odyssey started with a clipping from an old Ladies' Home Journal. From there, I was hooked 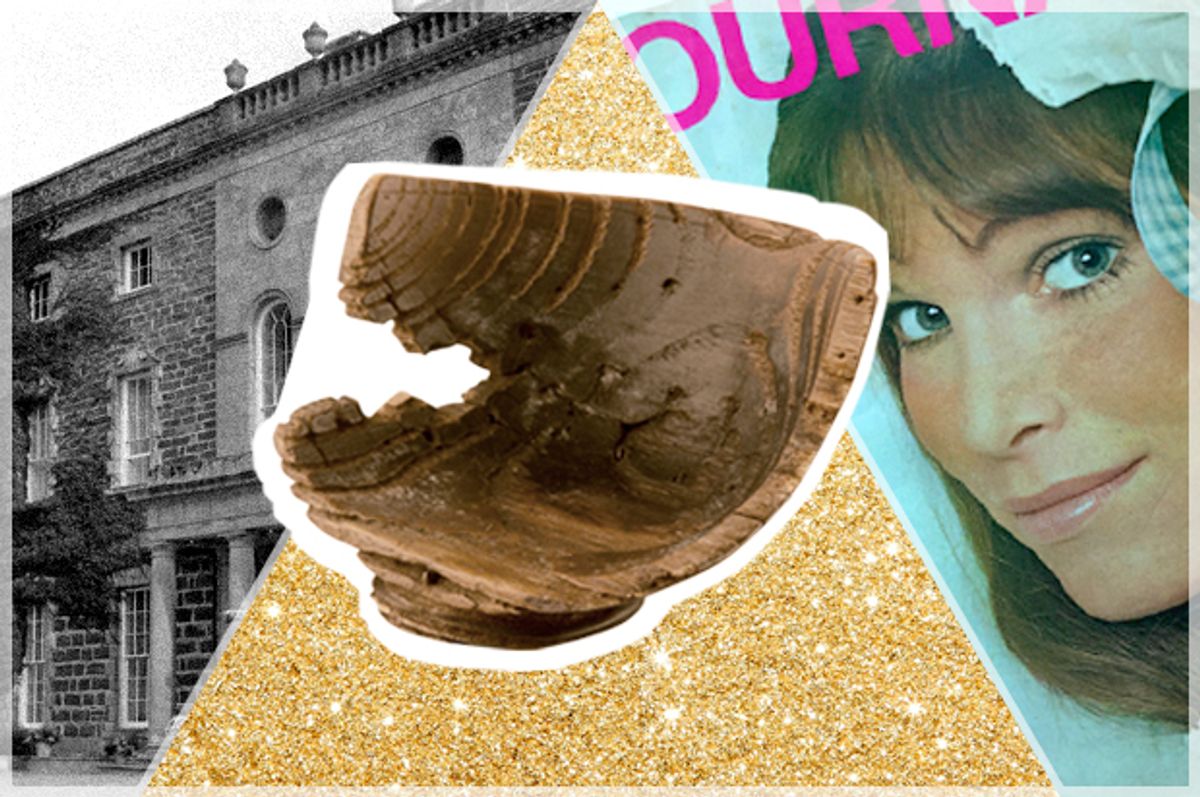 When I pulled up in front of a ramshackle four-room house at the end of a dirt road in rural North Carolina in 1989, I never thought I was beginning an almost 30-year odyssey that would end with publishing a novel about the Holy Grail. What I thought was: I’m wasting my time. As the nearest antiquarian bookseller, I had been called to take a look at some books that were part of an estate. The house in front of me, with its peeling paint and loose shutters, did not promise treasures. But as a bookman, I should have known to not judge a book (or a house of books) by its cover. A week later I bought most of the 6,000 books I found inside that decrepit house, including near pristine first editions of books like "The Catcher in the Rye," "A Streetcar Named Desire" and "Lolita."

It took me a few months to sort, research and price thousands of books, and as I sifted through the collection, I accumulated an assortment of bookmarks, ticket stubs and newspaper clippings — the sort of things we all leave in our books. Most of these were of little interest, but one caught my eye — a few pages clipped from an old issue of Ladies’ Home Journal. In comparison to the first editions worth hundreds (or even thousands) of dollars, these pages were worthless; but they would change my life.

They comprised most of an article about an author’s journey through England and Wales in search of an ancient wooden bowl thought by many to be the Holy Grail — the cup from which Christ drank at the Last Supper. This “cup” has had a long history of apparently healing those who drank from it, and the author’s journey to find it, and to hold it in his hand, was long and mysterious. I was captivated by this unassuming artifact and surprised to find that this miraculous cup rested not in a grand museum or ancient cathedral, but in a bureau drawer of a house in Wales.

I read the fragment of that article several times over the next couple of years. In the days before the internet, it fascinated me that a piece of Grail lore could be nestled in the pages of a women’s magazine. Eager to learn more, I went to my local university library to see if I could find the whole article. There on the shelf in the periodicals collection was a long row of bound volumes of Ladies’ Home Journal. I found the relevant issue, but when I flipped the pages, I discovered that page 58 was missing. And so was page 59 and the pages that followed. Someone had cut out the very article I was looking for. If I had been prone to conspiracy theories, I would have thought someone was hiding something.

Almost 25 years later, having written two novels set in that world of rare books that I had lived in back in the 1980s, I was staying at our cottage in Oxfordshire with my wife, Janice, when I decided to take a jaunt over to Hereford Cathedral. I was toying with the idea of setting my next novel in a cathedral library, and I wanted to visit Hereford’s famous chained library — the largest library in the world of medieval books chained to their shelves so they wouldn’t wander off with some monk or priest. After marveling at rows and rows of ancient volumes with dangling chains, I wandered into the cathedral precincts.

It was a beautiful, blue-sky day, so rather than return home I decided to press on over the Welsh border to Hay-on-Wye, the famous town of bookshops. I spent a couple of hours browsing and walking the streets of Hay. I had been thinking of updating my website with some information about my forthcoming novel, "First Impressions," which included a storyline of Jane Austen visiting a fictional estate called Busbury Park. Leafing through a bin of old prints, I came across one of a stately home that fit my idea of what Busbury should look like, so I plunked down four pounds with the thought that I might scan it and put it on my website. All in all, it was a lovely day that seemed completely unrelated to the Holy Grail.

When I began to work on my cathedral novel in earnest, it became clear that something was missing. My hero, Arthur Prescott, was searching for a lost manuscript that held secrets about the cathedral, but he needed to be looking for something more, something that would suffuse the story with greater historical tension. Why not the Holy Grail? Only then did I remember those clipped pages from Ladies’ Home Journal. Now, unlike in 1989, the internet existed, as did something called eBay. A few days later I had the complete April 1971 issue of Ladies’ Home Journal on my desk. Along with articles about Amy Vanderbilt’s face-lift and LBJ’s dog was one called “My Search for the Holy Grail,” by John Cottrell.

It was as fascinating as I had remembered it be, and this time I had the whole article. The cup that Mr. Cottrell had traipsed all over England and Wales looking for is called the Nanteos Cup because for many decades it resided at the Nanteos estate in Wales, the Powell family home. I did what I could not have done in 1989 and went online to research the Nanteos Cup. Most scholars believe it to be a medieval mazer bowl, only about 600 or 700 years old. It has never undergone carbon dating, however, and, as Cottrell’s article asserted, many healing miracles have been attributed to drinking out of the cup.

I further discovered that, just a few months earlier, at the very time I had been beginning work on my novel, the cup had been stolen, and now its whereabouts, which had remained a closely guarded secret for some decades, were unknown. It seemed to be a remarkable coincidence, but there were more coincidences yet to come.

Nearing completion of my first draft, and having read Cottrell’s article many times and incorporated material into my narrative, I was cleaning off my desk one morning when I came across an almost forgotten piece of paper — the print of a stately home I had bought for four pounds the previous summer. I was stunned to look at the caption and discover that the print showed the Nanteos estate, described in the caption as “The Seat of W. E. Powell, Esq., M.P.” It was the very house where the cup had been kept for decades. It seemed that the Nanteos Cup was stalking me, so to make it happy, I added another twist to the novel that concerned this mysterious vessel.

By the time I was next in England, the novel had been sold and the editorial process was underway. “We need more about the Holy Grail,” said my editor, and I gave some thought to what that might mean as I drove on another perfect English summer day to Richmond-on-Thames to visit my English publishers. I was just parking when the headlines came on Radio 4. That morning police in Herefordshire had announced that, with the help of an anonymous informant, the stolen Nanteos Cup (referred to on the news as the Holy Grail) had been recovered and returned to its rightful owner. I sighed as I crossed the street to the building where Virginia and Leonard Woolf once ran the Hogarth Press and that now housed my publishers. In the current draft of my novel, the fact that the cup was missing was an important plot point. Thanks to the good work of the West Mercia police force, I had some rewriting to do.

Perhaps after "The Lost Book of the Grail" comes out, when my readers get to the bit about how Bethany became fascinated by the Grail, eBay vendors will see a run on copies of the April 1971 Ladies’ Home Journal.

When I put the finishing touches on the novel, I looked up Nanteos House and discovered the estate is now a fancy country hotel and restaurant. After the journey that those few magazine pages — clipped in 1971 and found by me in 1989 — took me on, I feel drawn to Nanteos. It’s only about a three-hour drive from our cottage. I wonder if my wife might fancy an excursion to Wales and a weekend at a fine country inn? I’d love to stand, if even for just a moment, in the library where the cup was kept for so long, where pilgrims came to drink and be healed. Who knows what might happen?

Charlie Lovett is a former antiquarian bookseller, an avid book collector, and a member of The Grolier Club, the oldest and largest club for bibliophiles in North America. He is the author of four novels: "The Bookman’s Tale," "First Impressions," "The Further Adventures of Ebenezer Scrooge" and "The Lost Book of the Grail," which is now on sale from Viking. In 2015, Lovett curated "Alice Live!," a major exhibition of Lewis Carroll and Alice memorabilia at the New York Public Library for Performing Arts at Lincoln Center, as well as wrote a new introduction for Penguin Classics’ 150th anniversary edition of "Alice's Adventures in Wonderland" and "Through the Looking-Glass." He and his wife split their time between Winston-Salem, North Carolina, and Kingham, Oxfordshire, in England.