I hated using the women’s room, and not just because I was a boy 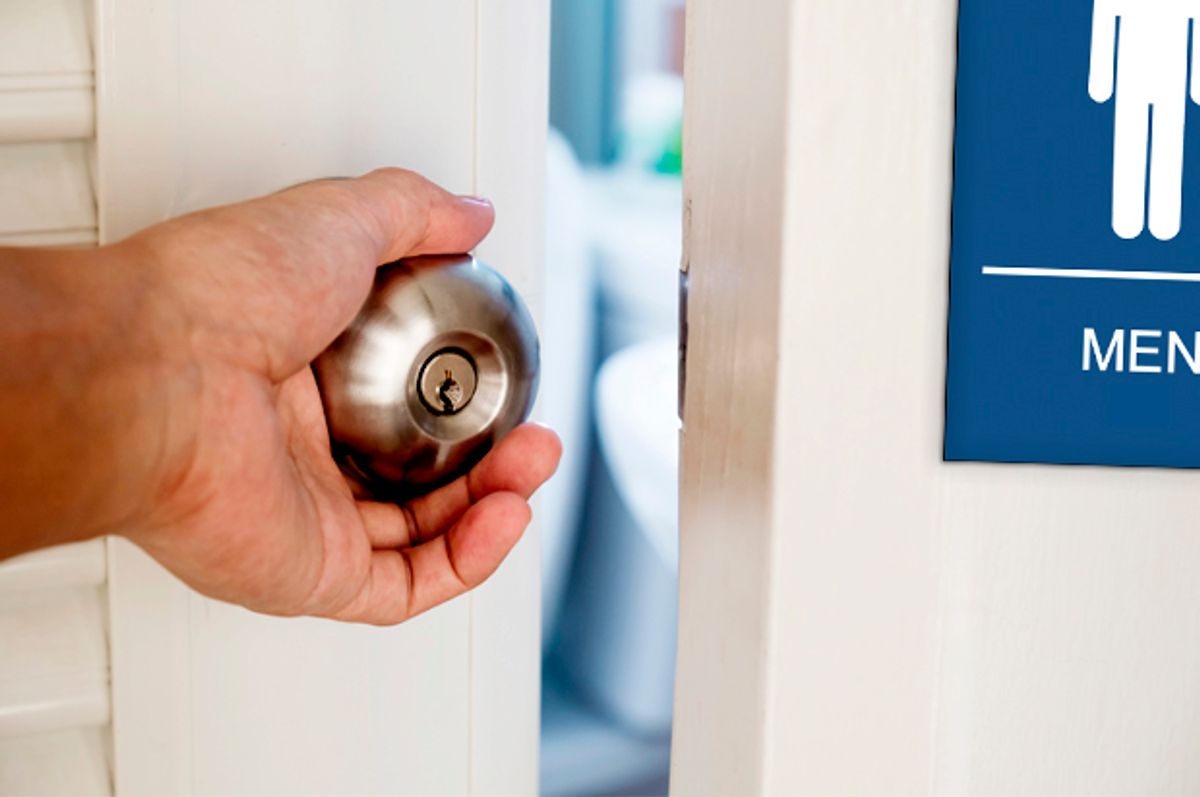 The first time I used a men’s room, I was 17 years old.  I looked about 14, probably, with my hair freshly cut short, my head still feeling light and buoyant after getting rid of the ponytail I’d carried through most of high school.

That bathroom was nothing special. In fact, I didn’t see most of it as I walked in, head down and turned slightly away from the line of urinals. I made a beeline for the stalls, which were the same as the stalls in every women’s room I’d ever used in my first 17 years of life.

I peed. I can’t remember if I washed my hands or not. Probably not.

I do remember that there were other men in the room. Two of them. Both at the urinals, and so their backs were toward me when I entered. And maybe they were washing their hands when I was leaving, and that’s why I’m thinking I probably didn’t wash my hands.

The first time I used a men’s room with friends — friends who’d known me from before, friends who’d known me my whole life — I was a few weeks shy of my eighteenth birthday. I’d been living as a guy for about a year. Home for the summer from boarding school, that awkward and potent summer between high school and college, I was working as a dishwasher. I’d been back in my hometown for a week or so, and a bunch of us decided to go to the movies together.

Such trips were always a challenge. First, because we all worked odd jobs with odd hours. Second, because none of us owned a car and the nearest movie theater was 40 minutes from our rural Maine town. And, for me, because though I had known these boys since preschool, I had gone away every September for the last four years to a prep school. And also because now at 17 I was, for the first time in my life, a boy.

We went to the movies, five of us crammed into someone’s mom’s sedan. Afterwards, debating Denny’s versus Friendly’s, we veered down the hallway toward the movie theater’s bathrooms. My short hair hadn’t been mentioned — I’d had it short third grade through seventh grade, after all, only growing it out at my mom’s insistence. They’d been calling me Al for years, so I didn’t have to tell them that I’d changed my name from Alice to Alex. And I wore the same t-shirts and jeans and flannel shirts and sneakers that I always wore.

Down that hallway, I thought, which one? Easy enough to just go in the women’s room, give people a dirty look when they scowled at me. It was the mid-’90s. Grunge and androgyny were reasonably widespread, even in the sticks of Maine. But I hated using the women’s room and not just because of being a boy. I hated it because of what was said to me: Get out! Was the nicest version. Other variations included dyke, queer, butch, bitch, creep, once (oddly) faggot and other, unprintable, words.

So I said to my friends, "Do you mind if I use the men’s room with you? Or would that be weird?"

And my best friend Bryan said, "Of course not. It would only be weird if you used the urinal."

I didn’t. In subsequent years, I would think about that — using the urinal. Devices were sold, tricks bandied about in trans groups I went to. Medicine spoons and surgical tubing. The plastic lid to a coffee can (clear plastic is best), trimmed of its edges, could be stowed in the back pocket, lifted out in one’s palm, curled into a funnel and used with care at a urinal. So long as you peed slowly and no one peeked. I practiced a few of these tricks. I got more than one pair of jeans thoroughly piss-soaked. I gave up practicing.

Lately, the news has me thinking back to that first men’s room, 21 years ago, and what drove me to go inside. I never would have entered if I thought I would have been detected, confronted, kicked out.

In fact, I’ll tell you what stands out to me even more than that first men’s room: It's the last time I went into a women’s room. I had come out as transgender to my parents just a few days before. It had gone somewhere in the range of “not a total disaster but not great.” We were out for a meal at my parents’ favorite seafood restaurant. It had not gone well already — the waitress had asked me, “What can I get you, young man?” and an argument had ensued when my parents tried to correct her and I tried to get them to shut up.

Needing to pee, or perhaps just wanting to escape the table, I went over the restrooms. I imagined what would happen if my father happened to also feel the urge at this moment, and what sort of scene might follow if he found me in the men’s room. So I went into the women’s room. At the sinks stood an older woman, who looked at me in the mirror as I entered, her eyebrows shooting up. “This is the ladies!” she said, thoroughly scandalized.

I thought about saying, “I know,” which had been my usual response during those years when I had short hair and people thought I was a boy. But this time, for the last time, I said, “I’m sorry. I guess I’m in the wrong place.”