Vladimir Putin has a plan to upend the political order of the Middle East. Spoiler alert: It's working

While the U.S. has been consumed by domestic politics, Putin has built a bold new strategy — and carried it out 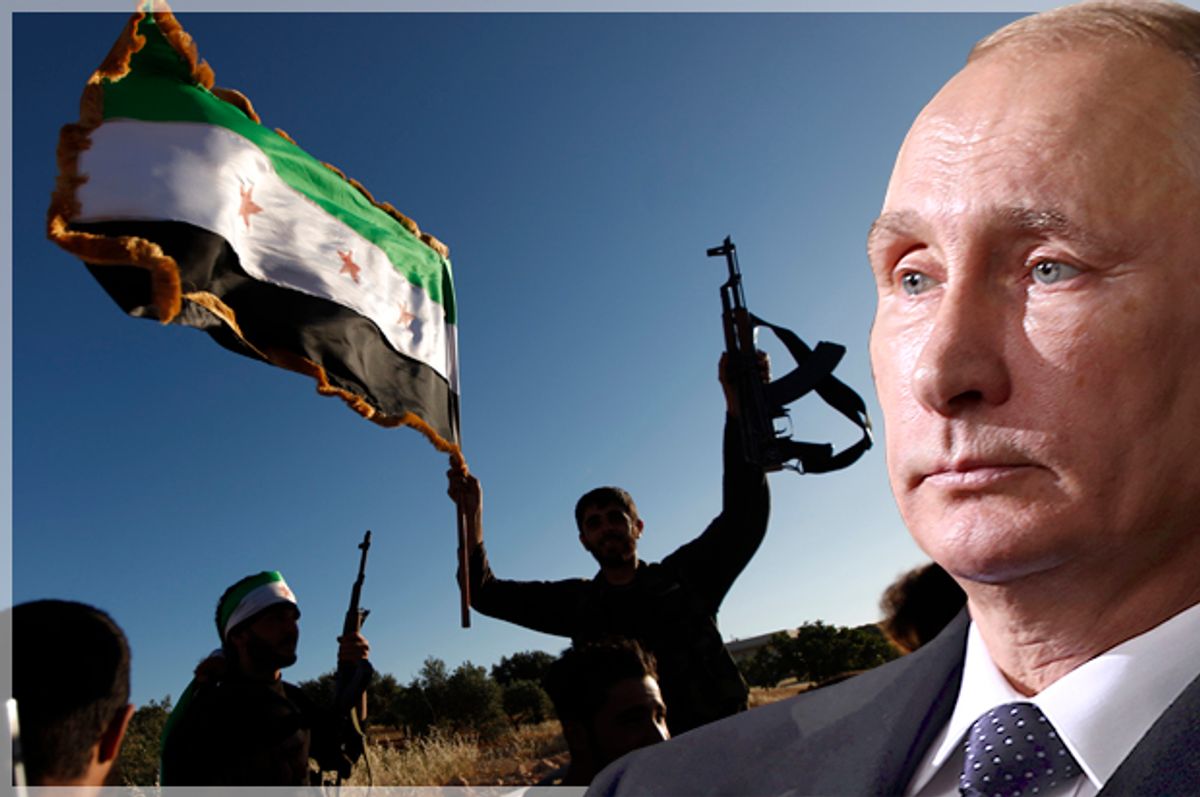 In Washington, whenever the idea of Kurdish independence from Iraq comes up, all kinds of experts, former diplomats and officials declare, “Never going to happen.” Without fail, the assertion is always backed up with an elegant and well-informed statement of the serious challenges facing Iraqi Kurds, leading to the conclusion that a declaration of independence is “not rational.”

Yet there remains the possibility that Iraqi Kurds may decide to make, perhaps in the near future, a decision that would be entirely rational. This gap is linked to the difference between what analysts think Kurds should do — based on these observers’ calculations of Kurdish politics and interests — and the way Kurds and their leaders actually look at the world. It is a problem that can leave American officials surprised by “unexpected” events and behind the curve on developing appropriate policies.

The debate about the Kurds is one among many examples of this questionable thinking that informs U.S. foreign policy. Consider the case of Iran in Syria, for instance. By now the Iranians were supposed to have been exhausted from their support for the regime of Syrian President Bashar Assad, in no small part because of the financial strain of maintaining the fight. And yet the Iranians remain.

Then there are the Russians, who were not supposed to move into eastern Ukraine and annex Crimea because of Moscow’s limited capabilities and NATO’s likely punitive response. Here we are, though. The Iranians (and Russians) are helping the Assad regime unencumbered, and the Russians have not backed away from their intervention in Ukraine, despite Western sanctions.

What is missing in the misbegotten analyses about the likely behavior of other people are ideas. For the Kurds, there are important ideas about identity at stake. In Tehran, support for Assad is not measured in financial terms but rather in terms of powerful ideas about the way the Middle East should look and Iran’s place in it. And the tragedy of a superpower lost clearly informs Russian President Vladimir Putin’s nationalist worldview.

This is why Western analysts and American officials often underestimate Russian goals, especially in the Middle East, at their peril. Even as Moscow’s strategic thinking has come into view in the last few months, there continues to be a prevailing sense among foreign policy experts that the Kremlin’s plans in the region have been ad hoc and its successes the result of brutishness rather than brains. There is something to this, if only because the assumptions that the Russian leader had neither a plan nor a lot of resources produced American and Western passivity that, in turn, provided new opportunities for the Russians.

Yet the explanation for Moscow’s behavior in the Middle East does not lie solely in the unwillingness of Barack Obama's administration to grasp the extent of Moscow’s intentions in the region. President Donald Trump’s team, to the extent it is interested in understanding what the Russians are up to, risks making a similar mistake if it fails to understand the Kremlin’s plan in the Middle East and the important and potent set of ideas that are its inspiration.

Putin seems to be the kind of person who holds on to a grudge. The beef that seems to keep him up at night plotting revenge is the humiliation of Christmas Day 1991. At 7:32 p.m. that evening, the hammer-and-sickle banner was taken down over the Kremlin, where it had flown since 1923, and 13 minutes later the Russian flag was hoisted in its place. It is not so much that the Russian president is an unreconstructed Soviet communist as the dissolution of the Soviet Union and the subsequent decline of Russia’s relative strength seem to have been particularly painful for this Russian nationalist.

To add insult to injury, since that historic moment, NATO has expanded to the east, the Russian economy needed help from international financial institutions to stay afloat, the United States has thrown its weight around the world with little interest or deference to Russian interests, and the Orange Revolution in Ukraine undermined a reliably pro-Moscow leadership there in favor of people who looked to the West. From a certain Russian perspective, this all looked mysteriously like an American effort to surround, destabilize and disrespect Moscow.

So from the time Putin became president of the Russian Federation, he has executed a plan. While Americans were focused on Afghanistan, Iraq, solving the Arab-Israeli conflict, tax cuts, promoting democracy in the Middle East, Obama’s birth certificate, the Tea Party, the debt ceiling, government shutdowns and the Affordable Care Act, Russia rebuilt its military capability and rethought its war-fighting doctrine. At the same time, Putin sought to rebuild Moscow’s global prestige, mostly by taking advantage of American missteps (at home and abroad), to offer an alternative. This has provided the Russians an opportunity to begin building new spheres of influence — which is helped immeasurably by the confusion, polarization and instability that Moscow has sowed in the West through social media, television and cash.

So what does this all mean in the Middle East? It was not that long ago that the United States was the predominant power in the region. In many ways it still is, given Washington’s continued diplomatic, military and commercial influence, especially when it comes to arms sales. Even so, Russia has reestablished itself as a power in the region. At the very least, the reliably pro-American Arab Gulf states understand that they must now take into account Russian interests and objectives. This is something they have not had to do for 25 years.

Much of the shift in regional power dynamics stems from the Russian intervention in Syria, which began in late September 2015 — an operation that a fair number of Western analysts (including this one) thought would be short-lived, ineffective and damaging to the Russian military. As odious as it has proven to be, Moscow has achieved a number of important objectives. The Russians have signaled that they will stand by their allies, drawing a distinction between Moscow and Washington, which many in the region believe to be feckless. They have also forced important American allies like Turkey and Israel to turn to Russia as they seek to achieve their objectives in Syria. Putin has also made common cause with the Iranians who, like the Russians, chafe at the regional political order established by the United States.

The Egyptians, who have benefitted from copious American economic and military assistance over many years, clearly regard Russia as an alternative to the United States. So much so that Egyptian government opposed possible U.S. intervention in Syria late in the summer of 2013 but has supported Russian military operations there.

To be fair, the U.S. has given the Egyptians reason to seek support elsewhere. Egyptian diplomats and military attachés in Washington are keen observers of American politics. In recent years they have begun to worry about the dysfunction on Capitol Hill and the creeping isolationism found within the Republican and Democratic Parties. The Egyptians reason that these developments may adversely affect their annual $1.3 billion allotment in American military aid.

There is also the erroneous Egyptian charge that the United States has supported the Muslim Brotherhood. As fact-free as that may be, it nevertheless provides an opportunity for the Russian leadership, whose views on Islamism are notable for their lack of nuance and thus align closely with those of Egypt’s leaders.

Then there is Libya, where the Russians have met with Gen. Khalifa Haftar, the self-declared leader of the self-proclaimed Libyan National Army. Haftar is as uncompromising to Islamists as his primary patrons, Egyptian President Abdel Fattah el-Sisi and United Arab Emirates Crown Prince Mohammed bin Zayed, but there is more going on in Libya than the fight against extremism. The country has the largest proven reserves of high-quality light sweet crude oil in the world. It also has a lot of natural gas. Both make Libya important to Europe. The Russians are clearly thinking ahead. Haftar may end up being Libya’s new strongman, but even if he does not, he is the power in the country’s east, where there is a lot of oil. While the Europeans are looking for ways to diminish their reliance on Russian energy resources, Moscow is looking for ways to keep them locked in and thus vulnerable.

The United States and the West more generally are only now coming to the realization that the Russians are not only back but that they have clear objectives, an understanding of the way to achieve those goals and the national resources to expend in the process. In other words, the Russians have been thinking strategically. The question is, What should Washington and its allies do about it? At one time, the Russian challenge would have been a clarion call for the Western alliance to respond, but the Trump presidency has thrown the very idea of a Russian threat into question.

Trump and his advisers seem so absorbed with the idea of destroying “radical Islamic terrorism” that they are more than willing to partner with the Kremlin. What they fail to see is that while there may be a confluence of interests in fighting extremism, Russia’s strategy goes well beyond this immediate objective. Rather, Putin wants to rewrite the rules of the Middle East and upend the regional political order that has made it easier and relatively less expensive for Washington to ensure the free flow of energy resources from the region, guarantee Israeli security, fight terrorists and prevent the proliferation of nuclear weapons. That’s the Russian plan — plain and simple.